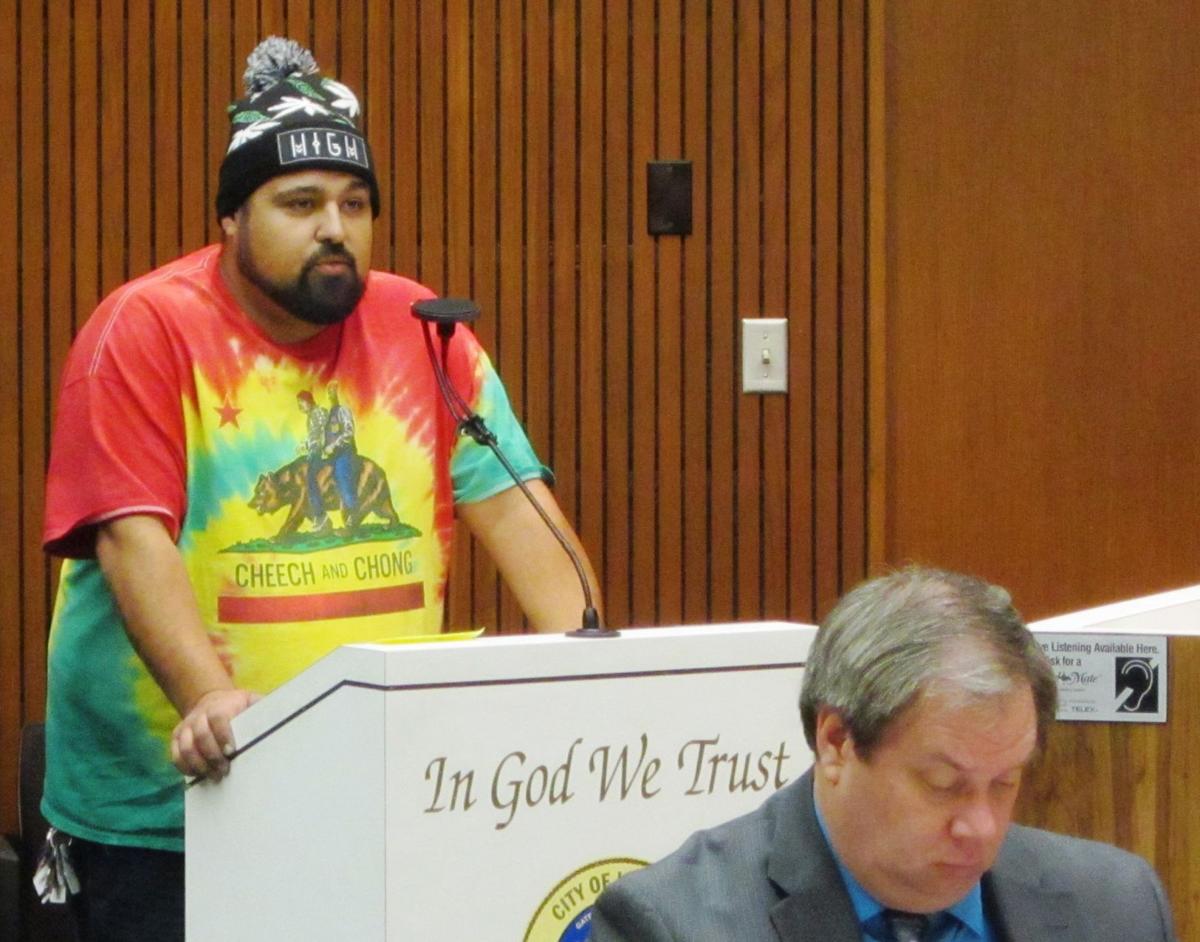 Lompoc resident Joseph Garcia addresses the Lompoc City Council on Tuesday night to ask the council members to not move forward with a proposed ordinance that would regulate marijuana cultivation in the city. 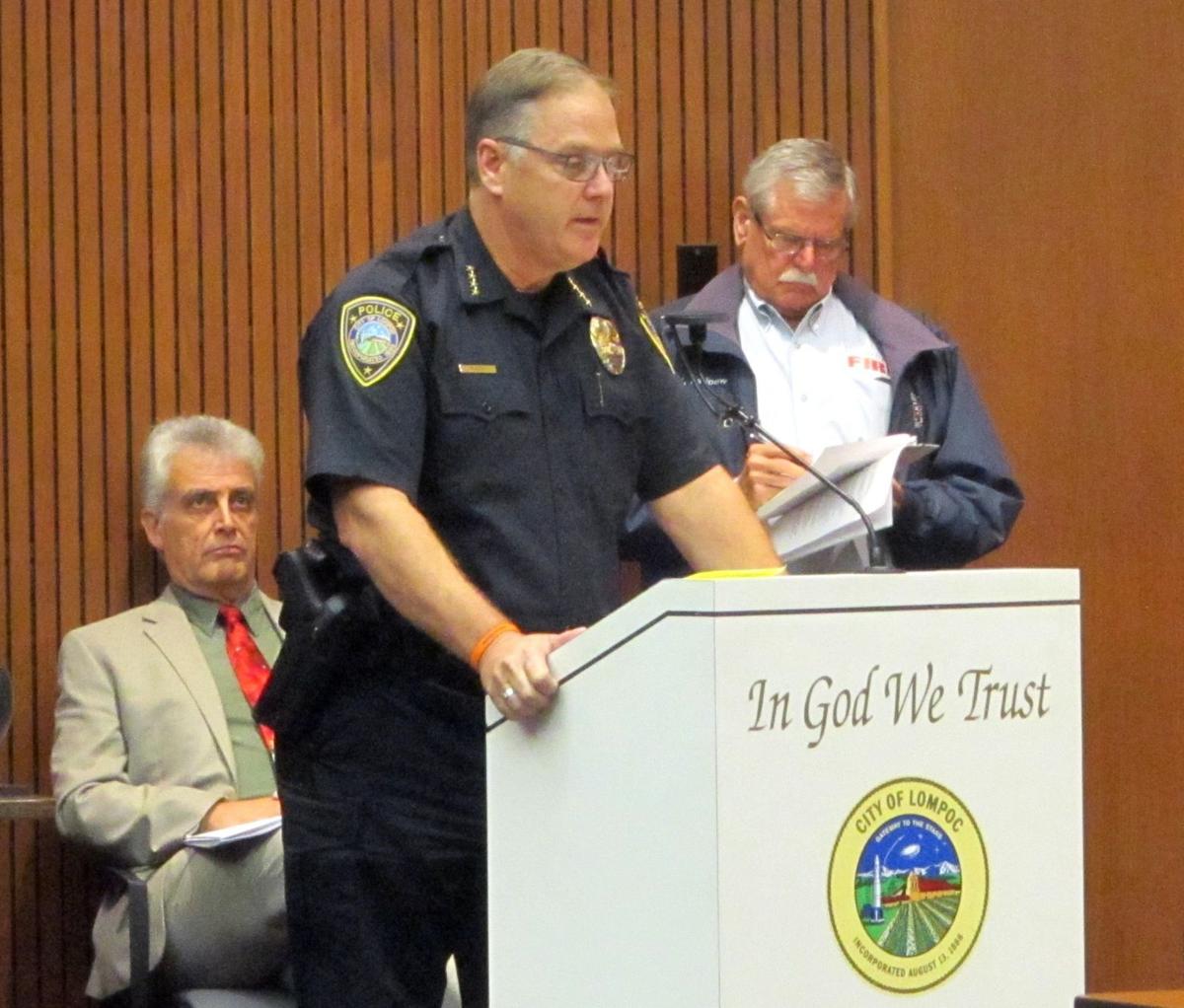 Lompoc Police Chief Pat Walsh talks to the Lompoc City Council about marijuana cultivation on Tuesday night as City Attorney Joseph Pannone, left, and Fire Chief Kurt Latipow look on. Each of the three men spoke in favor of a proposed ordinance that would limit marijuana growth within the city.

The Lompoc City Council chamber was filled with applause Tuesday night after the council voted unanimously to reject a proposed ordinance that would have heavily regulated marijuana cultivation within the city.

Each of the more than a dozen public speakers at Tuesday’s meeting asked the council to vote against the potential new regulations, which were supported by Lompoc’s police and fire chiefs and the city’s attorney. Each of the four members of the council — Mayor Bob Lingl didn’t comment on the issue — expressed agreement with the members of the public and referred to the ordinance as over-reaching.

After an hour of discussion, most of it public comment, Councilman Victor Vega made a motion for the Council to dismiss the proposed ordinance as written and instead form an ad-hoc committee made up of him, Councilwoman Jenelle Osborne and city department heads to develop a new, “more commonsensible” set of regulations.

“I think that this ordinance is probably just a little bit over the top,” Vega said before making his motion.

Among the regulations that were included in the ultimately failed ordinance was that all marijuana growers be at least 21 years old; all growing must be done indoors; building, electrical and plumbing permits would be required if alterations are necessary for existing structures; and that permits from the police and fire departments would be mandatory.

The ordinance also required that there be no evidence of growing activities from public right-of-ways. This would mean that odors must be controlled, that grow areas be secured so that only the permitted cultivator has access, and that each grow area have sufficient ventilation to remove excess heat and moisture, as designed by a licensed mechanical engineer.

There was some groaning and snickering in the audience when City Attorney Joseph Pannone and Police Chief Pat Walsh listed some of the city’s concerns that were identified when the ordinance was being developed. Among those concerns was that growing in the city could lead to violence, including “gun battles,” Pannone said.

Lingl later asked the crowd to quiet again after the audience gave Lompoc resident and attorney Robert Traylor a cheerful ovation after he used his three-minute public comment period to raise issue with several aspects of the ordinance.

Traylor first suggested that the placement of the ordinance on the final meeting before Christmas only served to diminish public participation, and then he took issue with regulations within the ordinance that he suggested were counter to Prop 64, which was passed by California voters in last month’s election and allows for recreational marijuana use and cultivation in the state.

“Regulations that are overly burdensome will most likely be subject to legal challenges,” Traylor said, noting that the proposed ordinance required, in some cases, 17 steps to engage in a legal activity.

“Until the federal government decriminalizes marijuana, this ordinance requires Lompoc residents to self-incriminate,” he later added, referring to the fact that growers would have to get permits from the city.

Other speakers included patients and providers in the medical marijuana industry who all asked that the city move toward allowing medicinal sales and/or deliveries in the city. Several speakers also pointed out that the city doesn’t regulate other activities, like alcohol production and opiate usage, as heavy-handed as the proposed ordinance would do to marijuana usage.

Those points were apparently not lost on the members of the council.

“I have the personal feeling that here we are trying to protect you from yourselves,” Councilman Dirk Starbuck said. “I hate when I have to protect myself from myself, and all that this is gonna do with an ordinance like this is those that are protecting yourself will now become criminals because you’re not in compliance with the ordinance.

“I haven’t agreed with a lot of ordinances, but I think this one may be over the top,” he added. “I read the requirements — I’m not building a house.”

Mosby went on to point out other ways the ordinance could potentially negatively impact the city, but concluded his comments by noting that the ordinance went against the will of the voters.

Osborne, who mentioned marijuana sales and distribution as a way to increase city revenue while she was campaigning for her City Council seat this fall, called the ordinance “overly prohibitive” and stood by her assessment that the city needs to embrace marijuana as a commodity.

“We need to think outside the box and we need to look at this as a 21st-century solution instead of a 20th-century problem,” she said. “We understand that prohibition doesn’t work and we shouldn’t repeat it.”

After the vote was made to essentially kill the ordinance as proposed, Lingl gave the audience what they wanted to hear.

“Now you can clap,” he told the audience with a laugh.

Like many others around the city and the state, Lompoc resident Joe Garcia said he was ecstatic when Proposition 64 passed by a wide margin in…

Lompoc resident Joseph Garcia addresses the Lompoc City Council on Tuesday night to ask the council members to not move forward with a proposed ordinance that would regulate marijuana cultivation in the city.

Lompoc Police Chief Pat Walsh talks to the Lompoc City Council about marijuana cultivation on Tuesday night as City Attorney Joseph Pannone, left, and Fire Chief Kurt Latipow look on. Each of the three men spoke in favor of a proposed ordinance that would limit marijuana growth within the city.