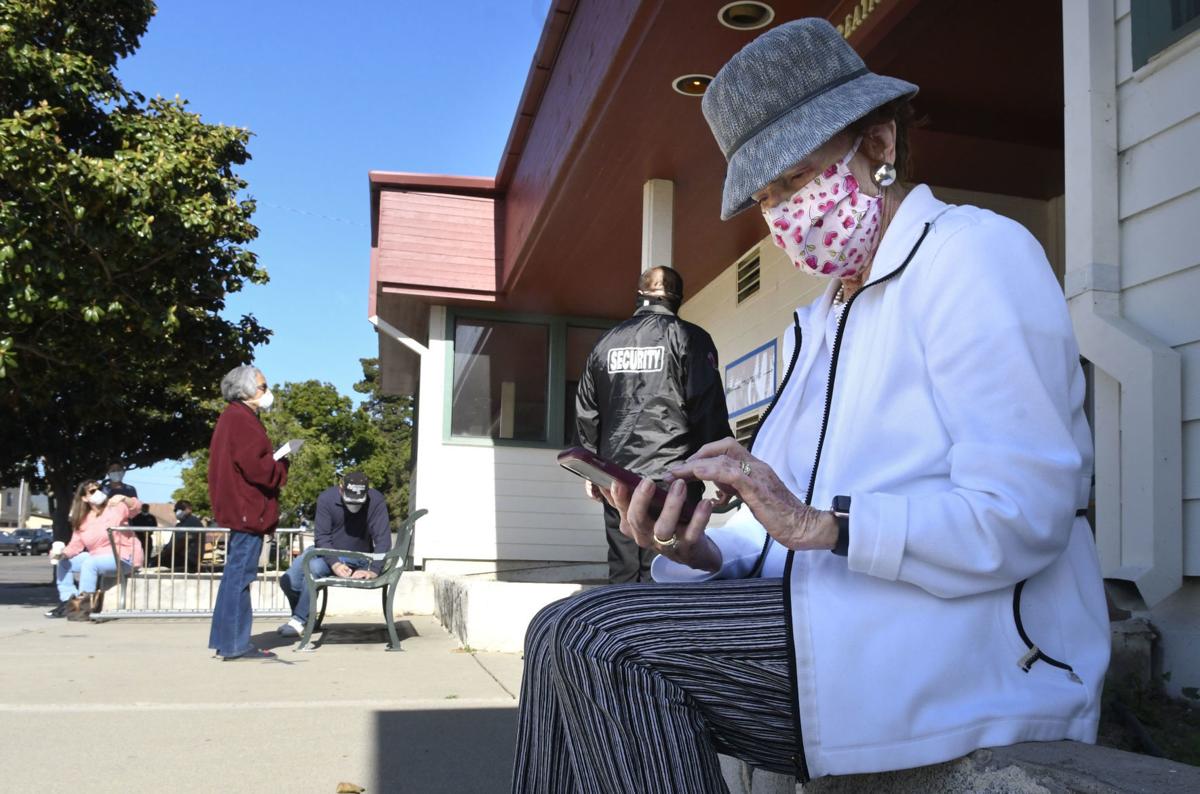 Helen Free, of Lompoc, waits for her daughter outside the Anderson Recreation Center where they were both tested for the coronavirus Friday. The Lompoc site opened Friday and is operated by federal health service OptumServe. 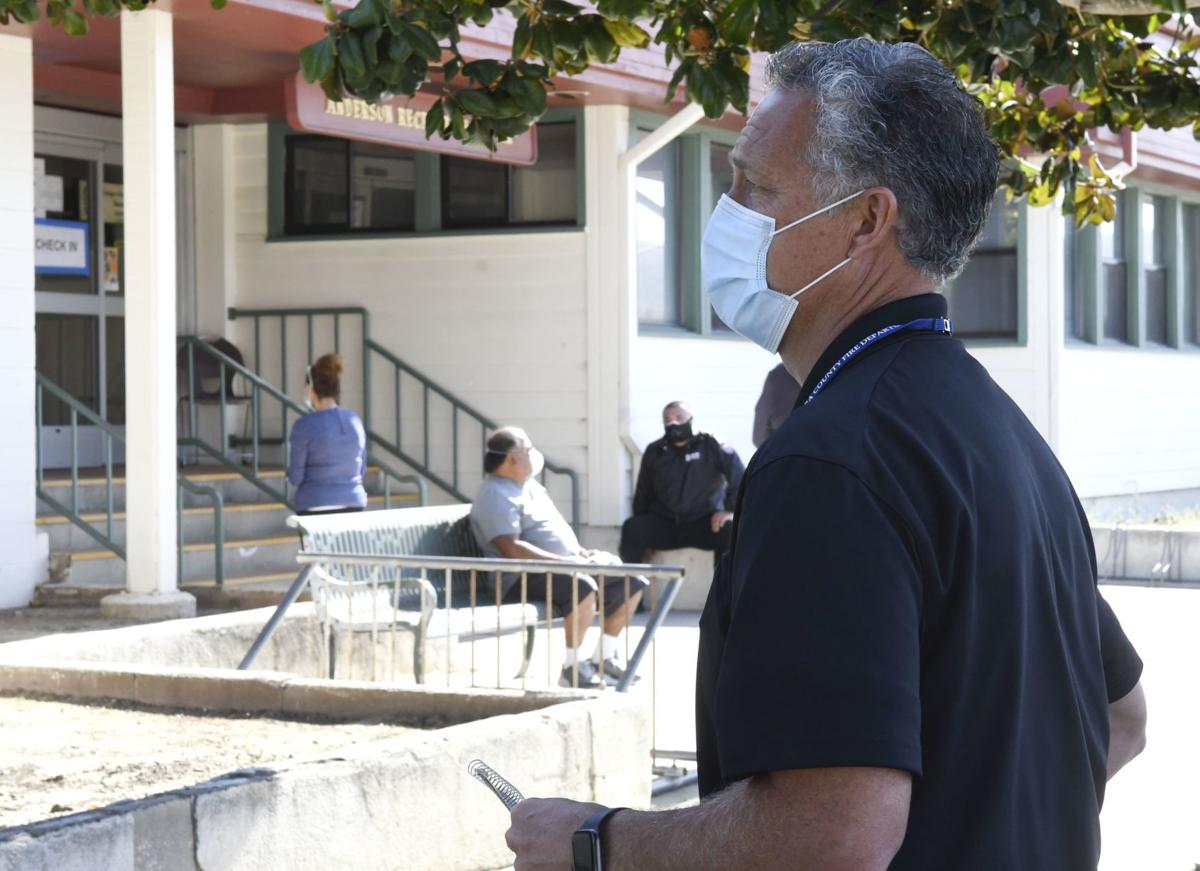 Although Rolanda Cordero acknowledged she wasn’t experiencing any symptoms of COVID-19, the Lompoc resident said she’d rather be safe than sorry.

It was for that reason that Cordero was was among a steady stream of people, all wearing face coverings, who filtered through Lompoc’s Anderson Recreation Center on Friday, the first day of communitywide COVID-19 testing in the city.

The site became the third — joining similar centers in Santa Maria and Santa Barbara — to be opened by Santa Barbara County officials in an effort to expand access to testing in the county.

Cordero, who works at Lompoc Valley Medical Center, said she was appreciative of the free opportunity to “make sure I wasn’t a carrier.”

“I think everybody should have it done, whether they have symptoms or not,” she said shortly after completing her test. “You could be walking around like Typhoid Mary.”

Cordero wasn’t alone in her reasoning.

The tests, which were carried out by federal health service OptumServe, were offered only to those who registered online beforehand. County officials reported that Friday’s first day of testing was completely booked with all 132 appointments filled.

Several of those who took the tests said they were not exhibiting any of the symptoms of the disease caused by the novel coronavirus.

Lompoc resident Jennifer Elliott said she was required to get tested before an upcoming medical procedure.

“I’ll be surprised as anyone if I find out that I have it,” she said, noting that she was told it could be three days before she receives the results. “I barely leave the house.”

Vandenberg Village resident Lee Roy said he wanted to be tested so that he would have peace of mind, or be able to provide that peace of mind to others, in case he intermingles with people in the near future.

Our Neighbors Series: How the Central Coast is adapting to living through a pandemic

The 76-year-old said he considered proactive widespread testing to be especially important in light of what he feels has been poor leadership throughout this pandemic from President Donald Trump and Vice President Mike Pence.

“If the president and the vice president can have it done three times a day, we can get it done one time a day,” he said. “And those [guys] don’t even wear masks. It's like they don't care.”

The tests are carried out with nasal swabs, and the procedure from time of entry to exit typically took less than 15 minutes Friday.

Elliott said the test itself was “not fun,” but she said that shouldn’t deter others.

“It’s not comfortable, but I’ve had worse tests, so it wasn’t that bad,” she said.

Despite having a deviated septum that had him worried about the nasal swab, Roy said the experience went a lot better than he expected it would.

“You couldn’t ask for a nicer group of people in there working the place,” he said, adding that the nasal swab was no worse than a shot in the arm. “Even everybody in line was really nice. This kind of thing brings the good out in good people and the bad out in bad people.”

Testing appointments can be made online at lhi.care/covidtesting or by calling toll-free to 888-634-1123.

Thanks to some of the COVID-19 business restrictions being relaxed on Friday, many Lompoc retailers have spent the past several days reopening their shops and preparing for what could be a critical return to business.

'Hanging in there': Lompoc Flower Festival Queen Contest presses on with 8 candidates vying for crown

The 2020 Lompoc Flower Festival Queen Contest is pushing on, despite the Lompoc Valley Festival Association’s decision last month to call off this summer’s Flower Festival. The eight young ladies vying for the queen’s crown have continued to fundraise during the health crisis, and contest organizers have tentatively scheduled a couple of public events to recognize the candidates.

'It's about the community': Lompoc residents express support for face-covering mandate

The idea of the greater good outweighing individual feelings proved to be popular among many Lompoc community members Tuesday in the final hours before face coverings went from recommended to required for most communal areas in the city.

Helen Free, of Lompoc, waits for her daughter outside the Anderson Recreation Center where they were both tested for the coronavirus Friday. The Lompoc site opened Friday and is operated by federal health service OptumServe.