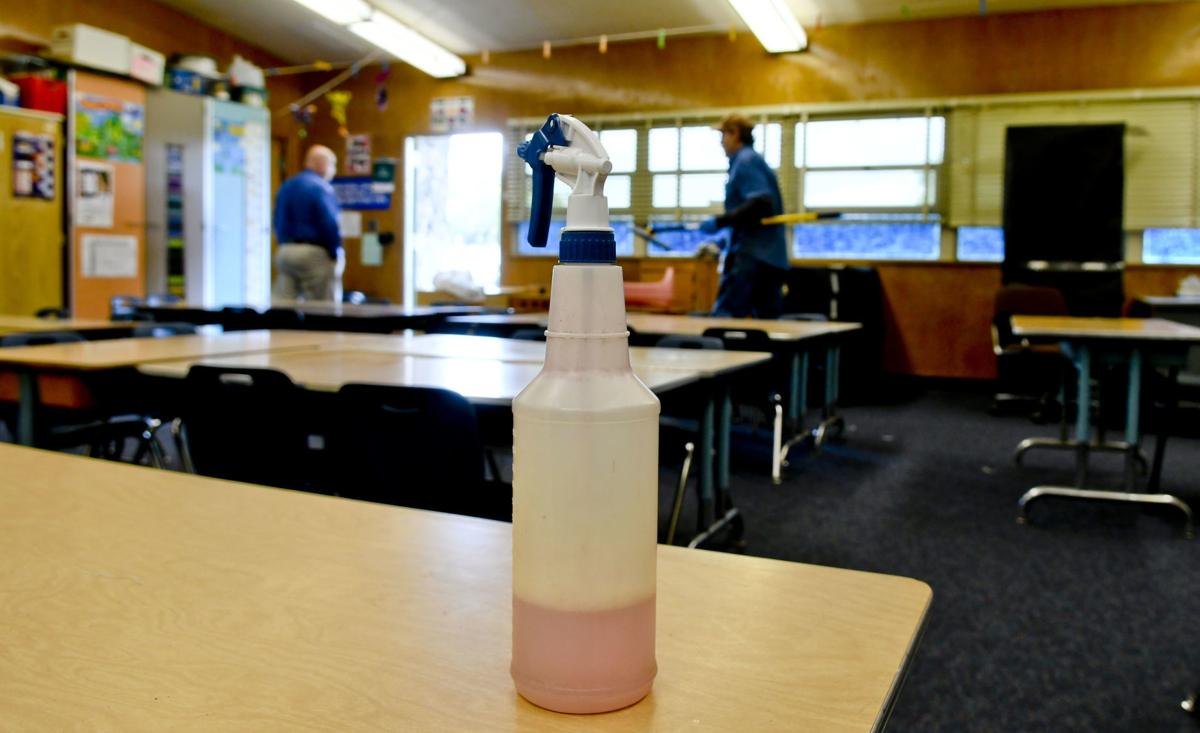 A spray bottle of disinfectant is placed on a desk as Lompoc Unified School District employees clean classrooms Monday to be used for children of first responders at La Cañada Elementary School. 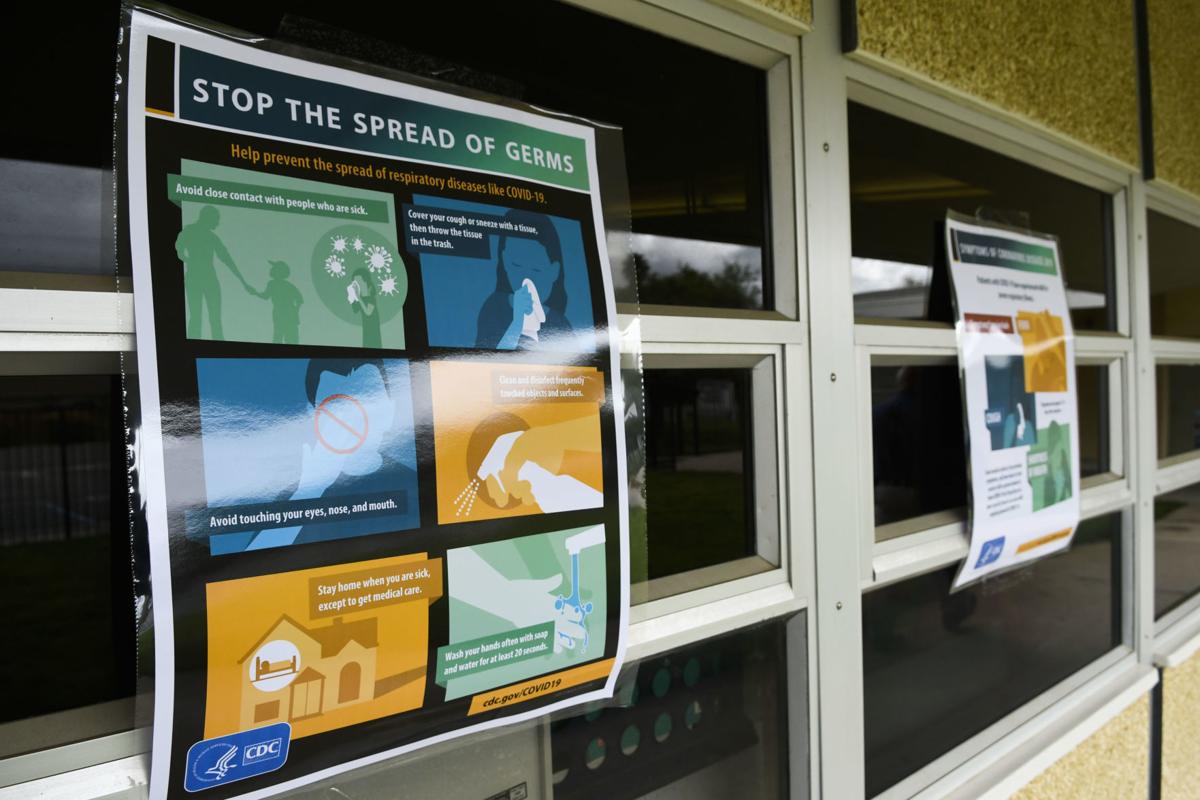 Fliers about cleanliness are posted in classrooms at La Cañada Elementary School in Lompoc.

Not long after Lompoc Unified School District announced plans this past week to open a child care center for kids of first responders, some community members — including at least one person tasked with ensuring the cleanliness of the district’s facilities — have raised concerns about the safety of such a plan.

LUSD officials have maintained that the district is following strict cleaning procedures in an effort to limit the spread of COVID-19, but a custodian with the district is among those who are questioning if best practices are being followed.

Christopher Neel, a custodian with LUSD for the past five years, doesn’t believe that he and other custodians have been trained properly in regards to handling this particular coronavirus, and that the current cleaning methods are putting everyone who enters schools sites — including students, staff and parents — at a heightened risk for possible infection.

“I don’t know if this is willful ignorance, depraved indifference or criminal negligence,” said Neel, who acknowledged that his stance could put his employment at risk. “If you know I haven’t been trained and you’re telling the public I have, you’re going to get people sick. Either you just don’t care, or you’re being intentionally obtuse and stupid.”

Neel’s opinions are in stark contrast with those of his bosses at LUSD, who reiterated this week that the district has followed recommendations from several agencies, including the federal Centers for Disease Control and Prevention, in its approach to prevent the spread of infectious diseases at its campuses.

“LUSD custodial staff have been trained on how to properly sanitize the rooms and areas where child care will be held," Doug Sorum, the district's director of maintenance and operations, said last week as part of the announcement of the new child care site that LUSD and other community partners established at La Cañada Elementary School.

Neel took particular issue with that comment, as he said he has not received any special training.

Neel said he took his concerns to his bosses and also to his union steward, but he said those conversations did not go well. He said he was not given the specific training information that he sought, and that he no longer feels safe working during this health crisis without that training or at least detailed information on how the current cleaning policies were developed.

“There is not any form of standardized training and I feel this is putting me, and my family, in imminent danger for infection,” he said. “I’m also told that I could be reprimanded for insubordination for refusing to be placed in what I consider imminent danger.”

Sorum, who is a direct supervisor of Neel, provided the Lompoc Record, upon request, with a detailed description of the district’s cleaning procedures.

Among the recommendations that he said were given specifically to custodial staff were that they wear disposable gloves for all tasks in the cleaning process, including handling trash, and that they clean their hands with soap and water for 20 seconds immediately following glove removal.

Further, Sorum said that LUSD’s daily cleaning procedures include the cleaning and sanitizing of surfaces and objects such as desks, countertops, doorknobs, sinks and faucet handles. For that process, he said that LUSD custodians use EPA-registered disinfectants that are appropriate for each surface, and that to be qualified to use those products, the custodians are required to complete a safety training module for use of antimicrobial pesticides.

“Some of the disinfectant products used in LUSD include Alpha HP, Virex, or a mixture containing bleach,” Sorum said. “Custodial staff have been reminded to follow label directions on cleaning and disinfectant products since, to be effective for disinfection, products must be applied so that they remain wet on the surface for an extended period.”

Sorum also pointed out that special measures were being taken at La Cañada for the first-responder child care program. Those include using a limited number of classrooms and having custodians empty the trash, vacuum the floors, use a Gen-Eon mist fogger (which are used to disinfect large, open spaces), and then wet-wipe surfaces with an EPA-registered sanitizer.

To further reduce risk, he said that custodians are performing daily sanitization of the two playground structures that will be utilized by the child care program at La Cañada. Also, according to Sorum, staffers from the Lompoc Family YMCA, who will be managing the site, have been advised to not co-mingle student groups, to allow only one group of children in a play area at a time, to not intermix staff, and to assign specific restroom stalls to student groups.

Still, Neel said he would like to see a uniform, sourced policy specific to COVID-19. He noted that not all custodians have been given the same information and training, and he said that he’s been told by different supervisors or colleagues to do things in different ways.

“If we're to be cleaning classrooms for students, it should be one single standard across the board,” he said. “Give us all the same equipment.”

Some parents and other community members have turned to social media to point out issues they perceive to be problematic with LUSD continuing to operate school sites during this coronavirus outbreak.

Mission Hills resident Harry Steele Moyer lives near the Los Berros Visual and Performing Arts Academy, and he said he is worried about the spread of infection at that site, specifically. Steele Moyer said he has seen school staff members, including custodians, and other residents continually utilizing the school site without personal protective equipment.

“I’m watching people walk out, literally, with food in their hands as they’re leaving the facility,” he said. “They’re going into the facility carrying things to put food into and they’re not wearing gloves — nothing, absolutely nothing.

“As activity is going in and out, there’s no way of them being able to control the cleanliness or who’s touching what or how many people are there,” he added. “There seems to be no oversight.”

That criticism seems to be at the root of Neel’s issue with his employer.

“The only thing I want is the proper training for my fellow custodians,” he said, noting that there are only 50 to 60 custodians districtwide and that a local outbreak could severely cut into that available workforce.

“I want [LUSD] to be able to document what my proper training was,” he added. “I don't want word of mouth, you know what I mean? We need proper biological abatement training.”

LUSD schools are scheduled to remain closed for regular classes at least through the end of April.

An interactive presentation led by Col. Anthony Mastalir, the commander of the 30th Space Wing, was the third in a series of town halls hosted over the past month by base leaders in an effort to keep the base’s military and civilian personnel informed on how the coronavirus outbreak is affecting life on base.

A person who was screened for COVID-19 at Lompoc Valley Medical Center has tested positive, marking the first confirmed coronavirus case in the city, a hospital spokeswoman revealed Thursday.

Lompoc Unified School District officials announced Wednesday morning that classes would remain canceled at least through the end of April. When schools were first shuttered on March 16, the closures were anticipated at that time to last at least through April 3.

With schools still closed amid the ongoing COVID-19 outbreak, Lompoc Unified School District leaders have joined with other community partners to provide free childcare for local families that are on the pandemic’s front lines.

City of Lompoc officials reported that they are working with area agencies to protect the safety of homeless people and the general public amid the ongoing health crisis, while Good Samaritan Shelters has altered its policies in an effort to ensure that people in its Lompoc and Santa Maria shelters are kept safe and protected.

Superior Home Health & Senior Services has announced that it will help seniors with prescription pick-ups, light grocery shopping, and other errands that are deemed essential. The services will be provided from 8 a.m. to 5 p.m. weekdays. Anyone who who would like to utilize them is encouraged to call 805-737-4357.

With schools set to remain closed at least through the end of April, LUSD is utilizing tutors through the California Student Opportunity and Access Program, also known as Cal-SOAP, to help the district’s more than 9,700 students keep up with classwork during the widespread shutdowns.

A spray bottle of disinfectant is placed on a desk as Lompoc Unified School District employees clean classrooms Monday to be used for children of first responders at La Cañada Elementary School.

Fliers about cleanliness are posted in classrooms at La Cañada Elementary School in Lompoc.