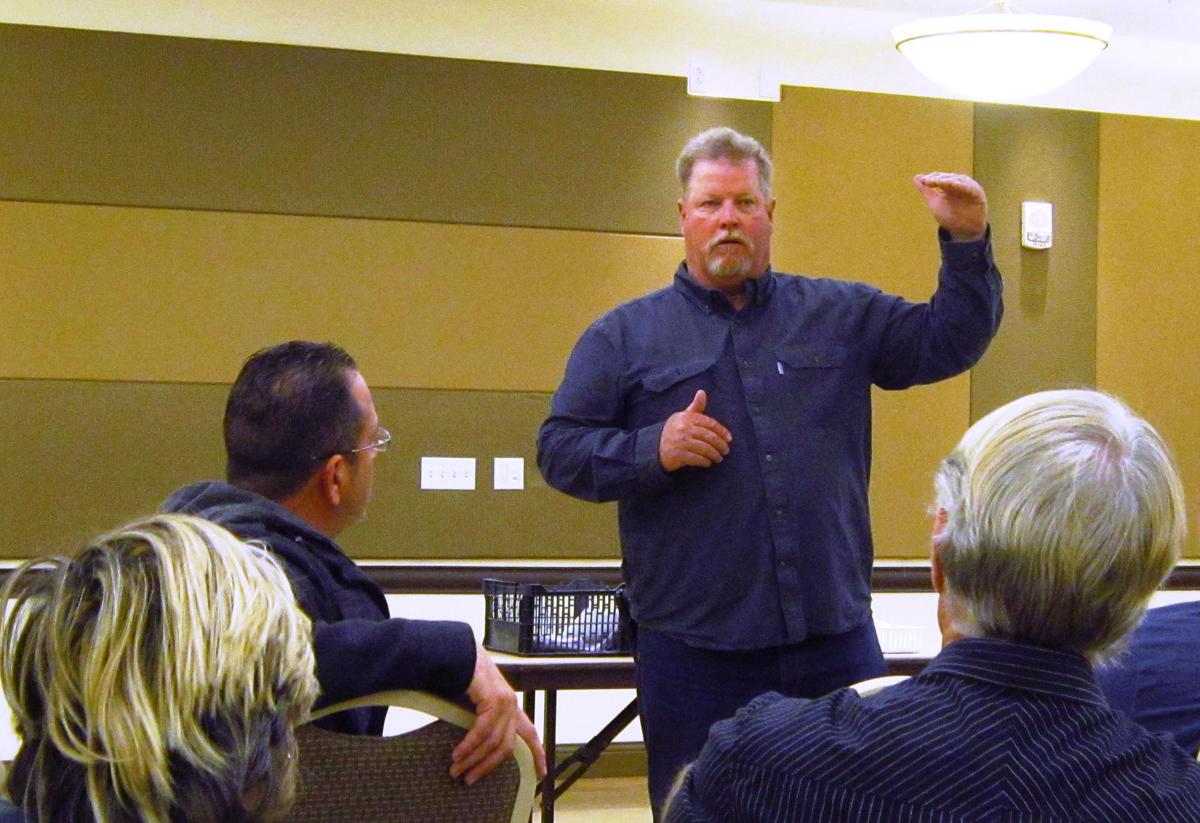 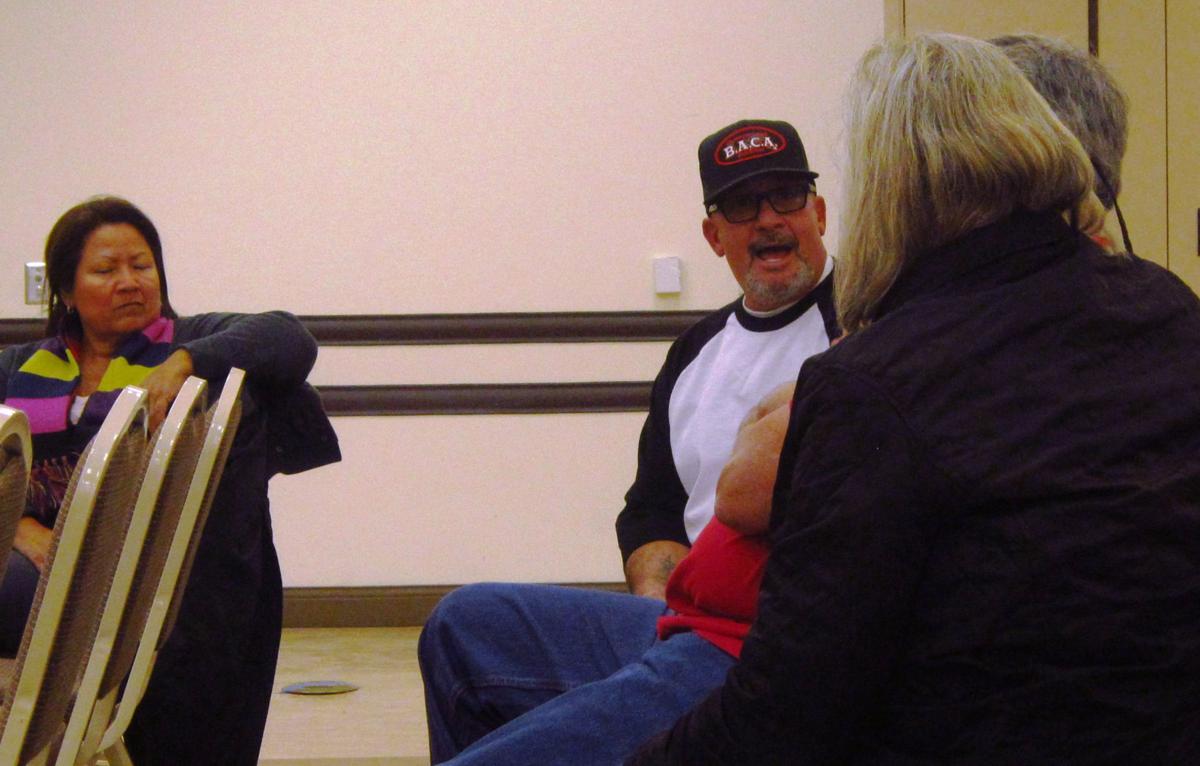 Just a day after an alleged murder involving members of Lompoc’s homeless population, safety issues involving the homeless, as well as the city’s new cannabis ordinance, were among the main topics explored at an open forum hosted Monday evening, Nov. 20, by Lompoc City Councilman Jim Mosby.

As many as 17 community members filtered in and out of the nearly two-hour open discussion, which was held in the main ballroom at the Dick DeWees Community and Senior Center. In addition to the aforementioned topics, Mosby also briefly gave his thoughts on district-based elections — he described the process as “dividing us to unite us” — and listened to personal concerns some residents had with the city’s bureaucratic process.

It was concerns with the homeless, however, that dominated much of the meeting, which was held one day after a man was allegedly murdered in the Santa Ynez riverbed, which is home to a large portion of Lompoc’s homeless population. The suspected murdered was killed by Lompoc Police officers hours after the Sunday shooting.

One woman at Monday’s forum flatly said that the homeless situation in town had her fearing for her personal safety.

The woman, who asked that her name not be used, said that some of her friends were recently biking near the riverbed when a presumably homeless person pulled a gun on them and attempted to rob them. She said she just recently realized how many people were living in the riverbed — about 120, according to some homeless advocates — and pointed to them and the many people who loiter and sleep around businesses and in parking lots around town, before asking, “And you’re supposed to want to shop in Lompoc?”

“Not me,” she said, answering her own question. “I go to Santa Maria. I mean, no offense to Lompoc, but I don’t feel safe in Lompoc. I don’t.”

Mosby encouraged the woman, and others, to turn to law enforcement when crimes are being committed. The woman, who said she was not surprised by Sunday's shooting, said she took her concerns to the Santa Barbara County Sheriff’s Office, which has jurisdiction over the riverbed, but she said she was told that deputies couldn’t do anything.

Mosby said he was disappointed by the response and noted that “we can’t cure it if we can’t go to the next levels.” He said he has expressed his opinion to county and law enforcement leaders that turning a blind eye to the issue “allows things to happen.”

Adding to the discussion were local residents Chuck Madson, a director at Coast Valley Substance Abuse Treatment Centers, and Mark Ashamalla, a mental health professional who also performs regular outreach to people living in the riverbed.

Ashamalla, who said he is familiar with about 90 percent of Lompoc’s homeless population, detailed some of the obstacles faced by those who try to help homeless people — some don’t want help, most are dealing with mental illnesses — and stressed that the organizations that are working to solve the problems can always use support.

Madson concurred, noting that many agencies are working to tackle not just the homeless issue but, also, the underlying issues of mental health and drug addiction.

“Lompoc is amazing,” he said. “The support systems that people have to get them the help that they need — once they’re ready to do that — there is a lot of support in Lompoc, a lot of people with caring hearts that are willing to go out of their way to help individuals.”

Still, the woman who initially raised the concerns said she’d like to see more being done by law enforcement to clean up the area. She noted that La Honda STEAM Academy and Fillmore Elementary School are within relatively close proximity to the riverbed and she said she’s seen at least one well-known homeless person frequently walking near the two schools.

Mosby said that Lompoc Police Chief Pat Walsh and County Sheriff Bill Brown had recently met to “haggle this out” and look at ways to deal with the situation.

Cannabis was also a major topic at the forum, which took place less than two weeks after the city formally adopted an ordinance on Nov. 7 that will allow and regulate commercial cannabis businesses in Lompoc.

Mosby stressed early on that the council’s decision to allow a free market cannabis industry in the city was perhaps misunderstood by some who believed that cannabis shops would be allowed to open on every corner. He pointed out that there are large exclusionary zones, of 600 and 1,000 feet surrounding certain places like schools and youth centers, in which businesses cannot operate.

Given those zones, plus the significant amount of red tape that a potential business owner will have to navigate from the state and the fact that property owners would have to be on board, Mosby said he believed that only three or four businesses stood a realistic chance of opening in Lompoc.

Mosby said his reasoning for pushing forward with the free market aspect was the motivation to not create a monopoly and to also try to reduce illegal sales.

“We’re trying to come through with sensible regulations,” he said.

While he said he’s supportive of the medical marijuana industry, thanks in large part to testimonials that he’s heard over the past year, he warned that the recently adopted ordinance, which also regulates the recreational industry, can always be negated. It’s because of that, Mosby said, that he’s been opposed to viewing the industry in Lompoc as a potential cash cow, because “if something should happen, I don’t want us to be blinded by money and say we can’t shut it down.”

“I’ve tried to reiterate, and have the city attorney reiterate, that it is a social experiment and if we see that it’s not working we can pull the plug on it,” he said.

Others at the forum shared their thoughts on cannabis, with no one vocally objecting to any aspect of the city ordinance, which has stirred debate around the city and sparked at least one effort to have the ordinance blocked by referendum and added to the November 2018 ballot.

Near the end of the event, Mosby also touched on district-based elections. The city is currently in the process of transitioning to district-based elections, in which each council person will represent a particular district within the city. The City Council and members of the public will have a chance to view and vote on possible district maps at Tuesday’s City Council meeting.

Mosby, who hadn’t shared his personal thoughts on the process during the City Council meetings, said Monday that he wasn’t necessarily in favor.

“In Lompoc, I’m not sure if it’s really needed,” he said. “We’re small enough, and we’re not so distinct and clumped and lumped.”

“Personally, I believe it has the opportunity to weaken us, as people will be fighting for ‘my park’ and not the parks of Lompoc,” he later added.

The transition was proposed, through threatened litigation, as a way to give more of a voice to the city’s minority population, particularly Latinos.

Mosby said he believed that goal could be accomplished better in other ways, such as voter registration and “get out the vote” campaigns.

As part of its ongoing transition to district-based elections, the Lompoc City Council on Tuesday night had its first chance to eliminate pote…

With tensions seemingly boiling over in response to the rising rate of property crimes — particularly thefts — throughout Lompoc, several resi…

This November’s election will mark Lompoc’s first under a district-based format, so to help voters prepare for the new system, the city has sc…

After months of planning and preparation, the city of Lompoc is set to move forward with its cleanup of the Santa Ynez Riverbed — a task that …