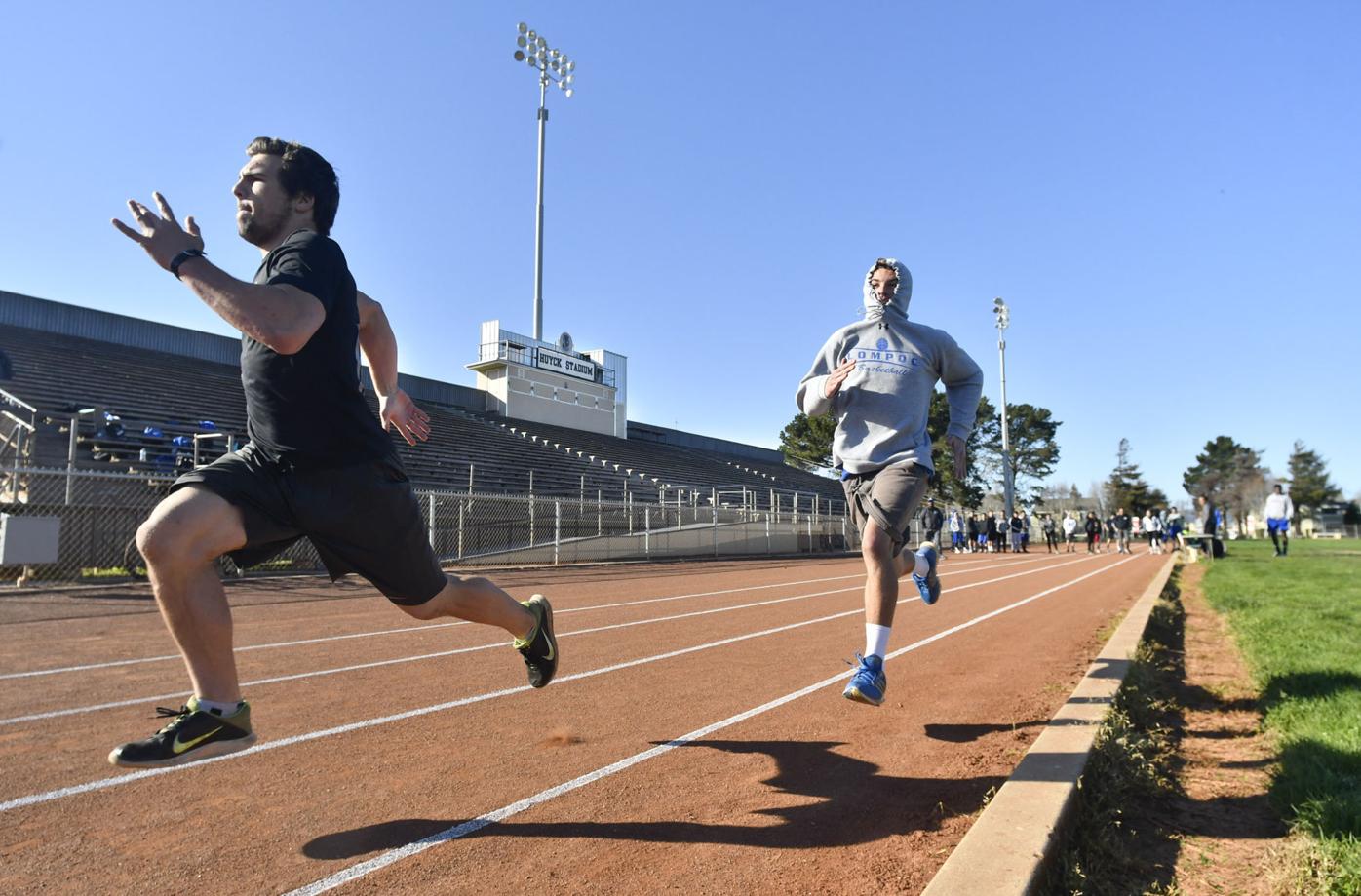 High school athletes run on the clay track at Huyck Stadium at Lompoc High School on Friday. A local group is proposing that the track and field be replaced with synthetic turf. 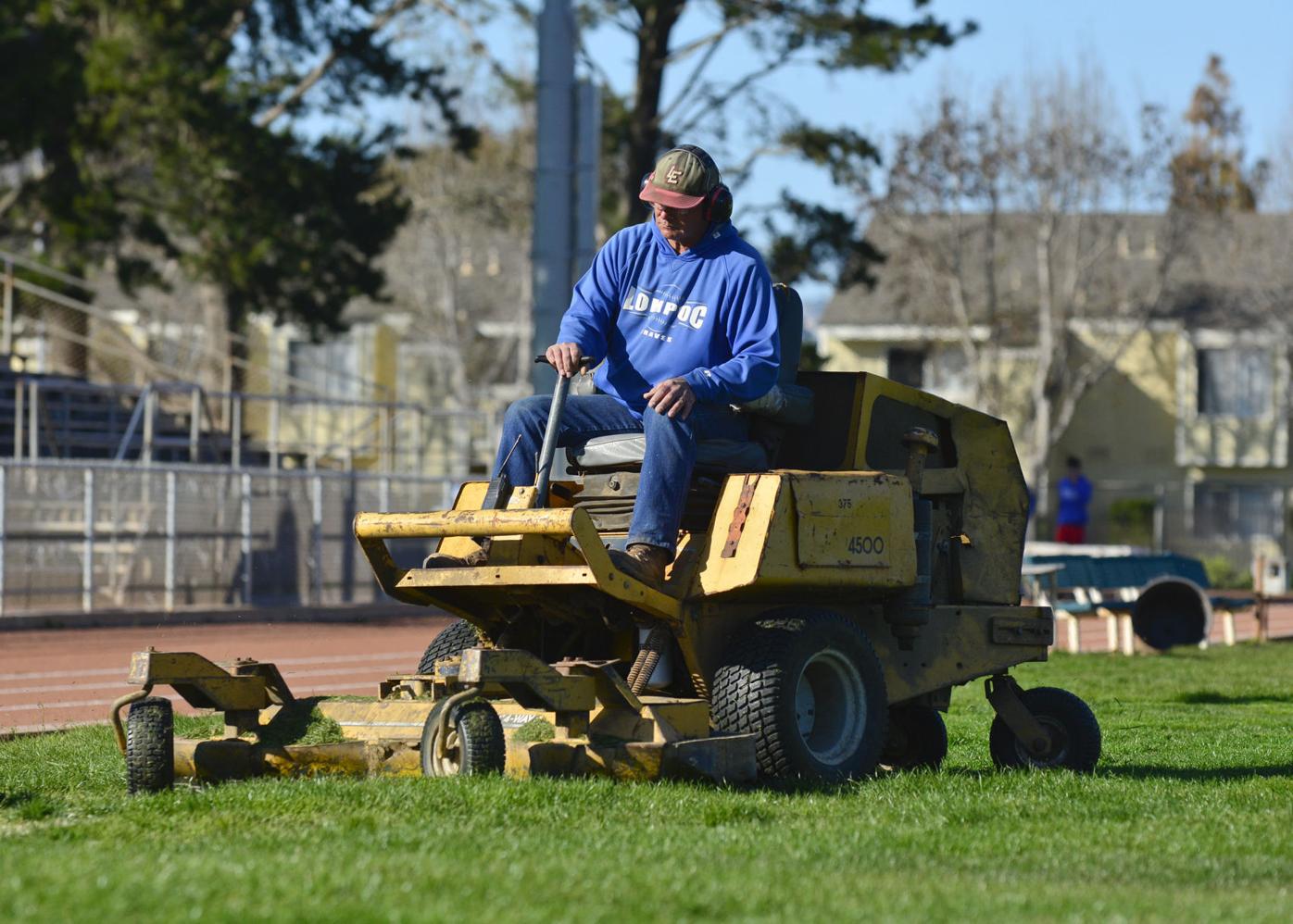 Russ Samaniego mows the grass field at Huyck Stadium at Lompoc High School on Friday. A local group is proposing that the track and field be replaced with synthetic turf.

High school athletes run on the clay track at Huyck Stadium at Lompoc High School on Friday. A local group is proposing that the track and field be replaced with synthetic turf.

Russ Samaniego mows the grass field at Huyck Stadium at Lompoc High School on Friday. A local group is proposing that the track and field be replaced with synthetic turf.

If a group of Lompoc community members — including the Lompoc Unified School District superintendent — has its way, one of the area’s premier venues could be due for a major face-lift.

Ashley Costa, the executive director of the Healthy Lompoc Coalition, led a presentation at Tuesday night’s meeting of the LUSD Board of Education in which she advocated for a nearly $2.4 million remodel of the LUSD-owned Huyck Stadium. While outlining the proposal, Costa highlighted several local benefits that such an undertaking would bring.

The extensive project at the 54-year-old stadium would mainly consist of converting the natural grass field to synthetic turf, switching the track from its loose red clay to a synthetic polyurethane — or “all-weather” — surface, and reconfiguring the track to the modern accepted standard of 400 meters with nine lanes.

A day after the presentation, LUSD Superintendent Trevor McDonald said he was fully in support of the effort to make the proposal a reality. A big reason for that support, he said, was the fact that during Costa’s presentation, she asked the district to consider funding only half of the estimated cost — about $1.2 million — while the Healthy Lompoc Coalition would work with other agencies and/or donors to raise the other half.

“I see it as a very feasible project, partially due to the group that’s working to get outside funding,” McDonald said.

“As we heard, they’re looking to fund half of it,” he added. “That’s a different conversation when we come to the table and have half of a $2 million project funded.”

Costa was joined for Tuesday’s presentation by Lompoc High School trainer and physical education teacher Tom Blanco and Eric Jennings Sr., a representative of Byrom-Davey Inc., which remodels athletic facilities throughout the state.

“With your help, we can renovate this track and field to preserve its celebrated history and ensure that it will continue to serve your students and the Lompoc community over the next 50 years,” Costa told the board. “We ask you to consider making this part of your legacy: To re-establish a source of pride for the community and unite LUSD schools in a stadium for which they can be proud.”

As per the proposal, the stadium, which is located at Lompoc High School, would move into a joint-use agreement between LUSD and the city of Lompoc. This would allow the facility to be open for public use when the stadium isn’t being used by the school district or for some other event, such as the annual Relay for Life fundraiser.

Costa noted that Relay for Life participants, many of whom have cancer, have often complained of the residue and grime the clay track creates, and she emphasized the health benefits that could come with opening the facility to the public at-large.

Costa, whose Healthy Lompoc Coalition focuses on improving community health, pointed out that about 20.5 percent of Santa Barbara County residents are considered obese.

“And, according to a UCLA study, 48.6 percent of Lompoc’s children are overweight or obese, the highest in Santa Barbara County,” she said.

She suggested that having a facility for children and families to utilize for exercise, without the added costs that come with many sports, would help to combat that high rate of obesity.

In a packet distributed to LUSD board members, Costa included eight letters of support for the project. These letters came from representatives of various organizations, including the city of Lompoc, the Lompoc Family YMCA, Lompoc High School, the Lompoc Boys and Girls Club and the American Cancer Society, which puts on the Relay for Life events.

A letter from Lompoc City Manager Patrick Wiemiller indicated that the city would staff the facility when it is open outside of school hours.

“It is the intent of the city of Lompoc to exhibit its support in a tangible manner by committing to provide monitoring resources during the hours that the track is in use by the public,” read a portion of the letter signed by Wiemiller. “The city will provide personnel who will monitor activities, advise citizens on proper use of the facilities, and summon assistance when required for the welfare of track users.”

If the remodel is performed, the stadium would still be shared by the Lompoc and Cabrillo high school football programs. A logo or signage for both schools could potentially be added to the turf.

Additionally, the newly reconfigured and resurfaced track would make Huyck Stadium eligible to host CIF meets, something it currently is not. The synthetic grass field, which would also continue to be used by the Lompoc High School soccer teams, would cut down on maintenance costs, as well as decrease the district’s water footprint, according to Costa.

Jennings pointed out during the presentation that his firm has done more than 350 similar jobs at various high schools and colleges, and has even developed partnerships with professional teams, such as its work on the practice facility for the NFL’s Los Angeles Rams.

He said the proposed track typically lasts about 30 years, and the new synthetic field usually lasts 10 to 12 years and would come with an eight-year warranty.

If the project was to be approved by the board, and the funding was in place, the timeline for completion would be a little more than a year, the presenters told the board. That timeline would include a month for the district to work with attorneys, four to six months for project approval by the Division of the State Architect, two months for design and four months for construction.

McDonald, noting that the backers of the proposal are well-organized and ready to go, said he was excited to see the project potentially get off the ground.

“It’s a strong committed group that is just really pro-Lompoc — Cabrillo and Lompoc high schools — and pro-kids,” he said a day after the presentation.

Board member Dick Barrett acknowledged immediately after the presentation that he was fully in support of the proposal. The item wasn’t up for any vote Tuesday, but Barrett implored his colleagues on the board to seriously consider moving forward if and when the item returns for action.

“I think the commitment from the community is amazing,” Barrett said, noting that more than $1 million of the cost could come from outside the district. “There’s money here, folks, and there’s people here willing to (work).”

Barrett said he felt like the improved facility would give local athletes a better chance of excelling, and that it would put them at least on par with a lot of their opponents around the Central Coast.

“We’re the only place in Santa Barbara County that doesn’t have it,” he said of a modern stadium facility. “Go to Santa Barbara and look at all the high schools. Go to Santa Maria. Go to San Luis (Obispo) County. We’re about the only ones around without it. We don’t need to be second-class citizens anymore with this thing. It’s time. Hopefully we can work it out somehow.”

The city of Lompoc soon could cut all funding to outside agencies, drastically reduce its capital improvement project expenses and ask residen…

The proposed remodel of Lompoc’s Huyck Stadium moved closer to becoming a reality Tuesday evening, as the Lompoc Unified School District Board…

The organization leading the way in the proposed $2.4 million renovation of Lompoc’s Huyck Stadium was granted a fundraising extension Tuesday…