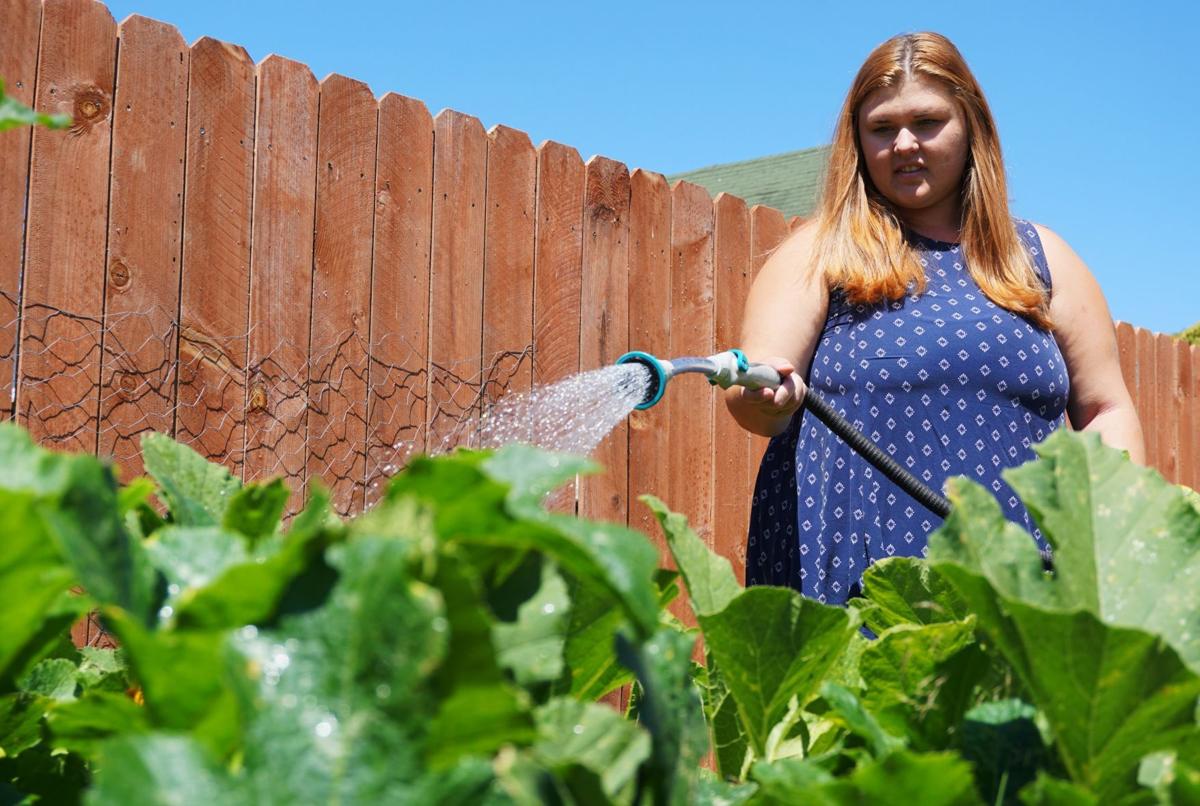 Annalynn Clark, shown watering plants Monday at her Lompoc home, has been named a finalist in Mayflower's national "Mover of Movers" contest. If Clark receives more votes than the two other finalists, she will win $25,000 that she intends to use to bolster an environmental club and gardening program she helped start last year at Lompoc Valley Middle School. 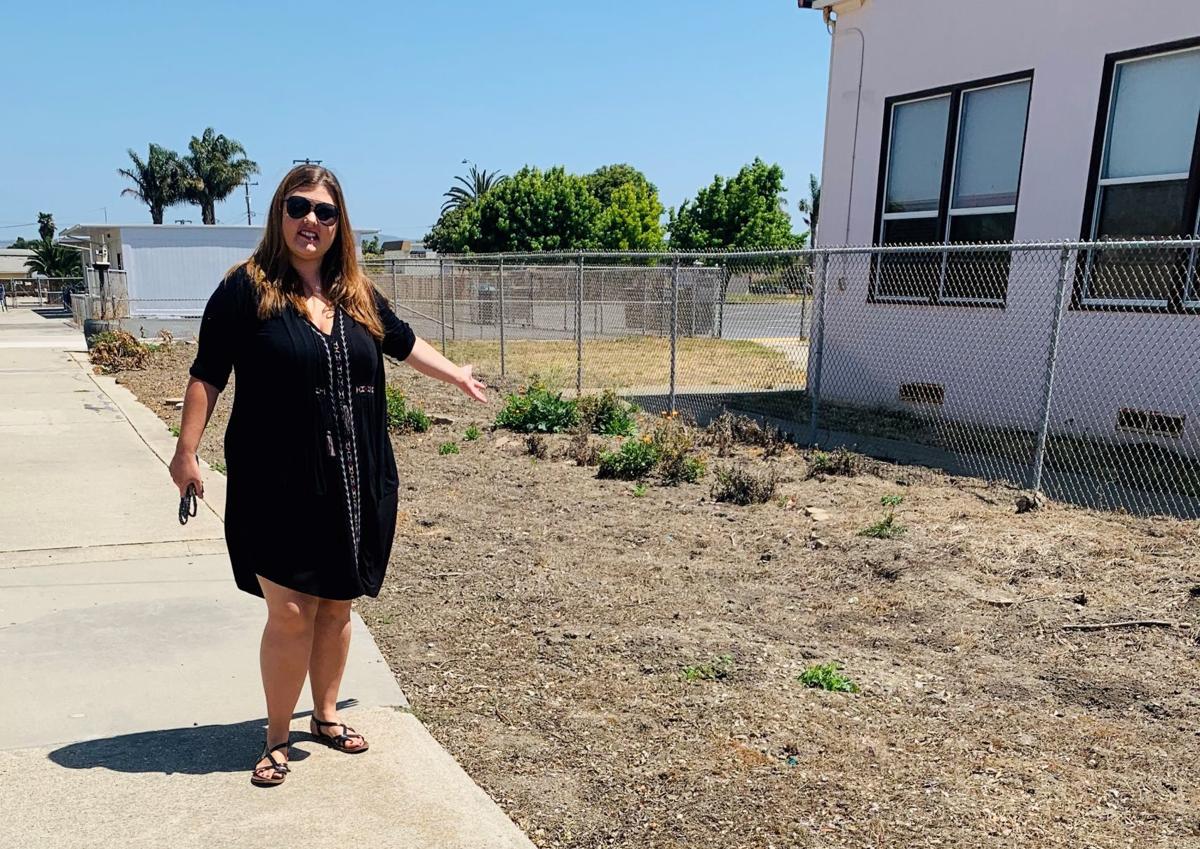 Annalynn Clark points to some of the "barren" outdoor space at Lompoc Valley Middle School. The teacher is a finalist in a national contest with $25,000 up for grabs. If she wins, Clark, who helped start an environmental club on campus, said she plans to install more plants and incorporate more educational outdoor opportunities at the school. 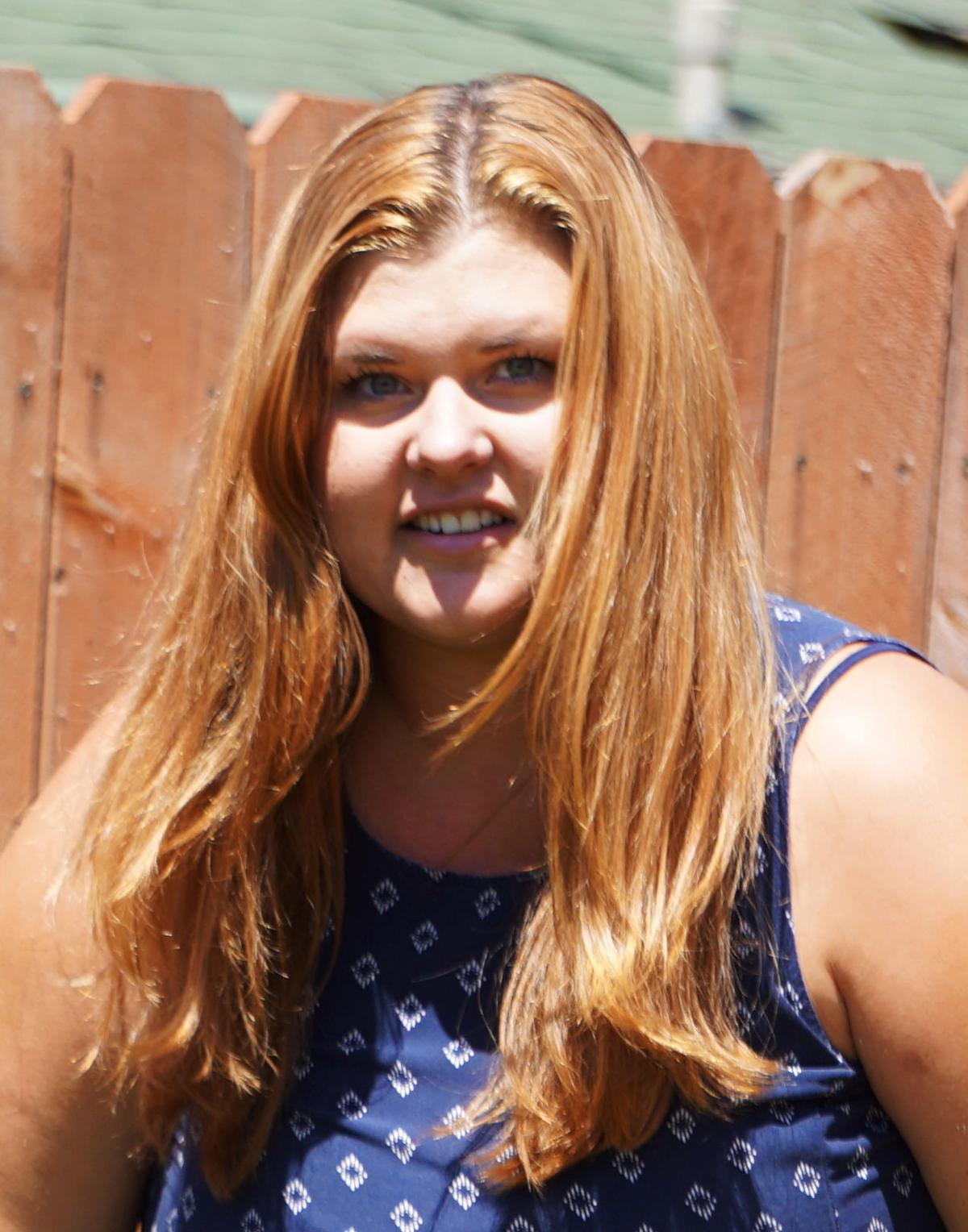 When Annalynn Clark began working at Lompoc Valley Middle School last year, the special education teacher was dismayed by a particular aspect of her new workplace.

Clark, 29, had spent the previous five years teaching at Santa Ynez Valley Charter School, a campus that embraces the outdoors, and had earned undergraduate and graduate degrees, as well as her teaching credentials, from Antioch University’s Santa Barbara campus, which encourages using nature to educate.

“Then I got here and [LVMS] is pretty barren,” she said, noting that she loves most everything else about her first middle school job. “They even took out the trees last year from half of the school.”

Despite that lack of green space on a campus that she likened to a “concrete jungle,” Clark used her limited resources to help cultivate an Environmental Club at the school with a focus on gardening and mindfulness.

The club and Clark are now under a national spotlight with a chance to significantly bolster those resources.

Mayflower, a national company that offers moving services, revealed this week that Clark had been selected as one of three finalists in its “Mover of Movers” contest, which aims to honor and reward an individual making a positive impact in his or her community.

Clark and her story are featured in a 92-second video posted on Mayflower’s website alongside the other two finalists. Also on Mayflower’s website — at https://www.mayflower.com/newsroom/mover-of-movers-contest-lp2 — members of the public are able to vote once per day, through Aug. 17, for the finalist of their choice. The person with the most votes will be awarded $25,000.

Clark said she almost didn’t believe it when she learned that she had been picked as a finalist in a contest that was open to the entire country.

“I was like, ‘Wait, what?’” she said. “And then when they sent the interview crew out, that was when I really felt like I was living in a surreal [world].”

Clark has already developed a plan for how the money will be spent if she is ultimately selected as the winner.

She intends to spend $5,000 per year over the next five years, with annual expenses of $1,000 on tools; $500 on supplies; $1,000 on incentives for the club, like T-shirts and hats for students; and $2,500 on training, beginning with herself in the first year and other school staff members in following years.

Clark said she’s already identified training programs that focus on managing school gardens in California, and she’s also interested in undergoing training on beekeeping so that she can teach that to students and possibly develop a hive on campus.

The Environmental Club had grown to include about 20 students before campuses were closed in March due to the COVID-19 pandemic.

Along with raising plants in large wine barrels around campus — since there was no space for a traditional garden — the club members also cleaned out an old abandoned greenhouse on campus that Clark discovered near the school’s science building.

It was just before the pandemic that Clark said her mother, Cathleen Clark, “stumbled across” the Mayflower contest and decided to nominate her.

“[My mom] knew that we were struggling with funds,” Annalynn Clark said. “She knew I was running to the dollar store to try to find things to fix up our campus.”

Cathleen Clark said it seemed like a no-brainer to nominate her daughter after she read over the contest guidelines.

“She’s always, since she’s been a kid, seen areas of need in our local community and wanted to help,” she said. “She’s just always been very community-based, goal-oriented and wanting to help the kids.”

Annalynn said the Environmental Club, which she also uses to build relationships between her special education students and their general education peers, can certainly use the money.

She noted that the club receives a $300 annual stipend from the school. Last year, the club used those funds to purchase recycling bins and started a recycling program at the school. The goal was to use the funds generated by the recycling to further boost the club’s coffers.

“But this (Mayflower) funding would blow that out of the water,” she said, laughing.

Along with using the club to bolster education programs at the school, Clark said she hopes to instill lifelong lessons in her students. She said that 83% of her students were food-insecure, meaning they didn’t know where they would get their next meal.

“Luckily, they have the Lompoc Unified schools giving out meals still, but beyond that I’d like to teach them how to grow some of their own meals and give them a little bit of independence,” she said.

Although LVMS, like most schools around the state, will utilize online distance learning when the 2020-21 school year starts on Aug. 17, Clark plans to keep the club active.

She said she’s hopeful to be able to bring at least five students who were really engaged in the club onto campus to care for the plants already there, and she’s toying with the idea of sending seedlings and supplies home with club members when they pick up their laptops from school so that they can continue gardening at home.

Eily Cummings, the director of corporate communications for Mayflower, said the company was proud of each of the three finalists.

“With ‘Mover of Movers,’ we strive to empower those who are taking risks and making epic moves to achieve their dreams,” she said.

The contest's other finalists include a man in New Jersey who owns Newark’s only Black-owned bookstore and offers services to his community, and a 16-year-old in Arizona who founded a program that provides school supplies to students in need.

Clark said she was thrilled to be alongside the other finalists.

“I want people to vote for me, but ultimately, [Mayflower] is such great a company for them to nominate three education-based things like this,” she said. “I’m just happy that this is such a cool program.”

Cathleen Clark said she also was supportive of the other finalists, but noted that she'd be voting for her daughter.

July 31 recap: Lompoc news you may have missed this week

Alexander Murkison, a 19-year-old former Lompoc High class president, this week became the first person to publicly announce his intention to seek one of the three seats that will be up for grabs on the Lompoc Unified School District board of education in the Nov. 3 election. He joins Janet Blevins as candidates who have filed paperwork for this year's LUSD race.

The City Council voted 4-0 — Councilman Dirk Starbuck recused himself — to approve the request from the YMCA, which reported major revenue losses after closing its doors in mid-March due to the COVID-19 pandemic.

The Lompoc City Council last month approved a contract with Great Western Installations, Inc., to modernize and update the amenities at the park located at East Olive Avenue and South Fifth Street. The nearly $740,000 project will consist of the installation of several play structures specifically designed to be accessible for children with disabilities, as well as an adult fitness zone with a mix of exercise machines and workout stations.

Lompoc Unified School District has moved the start date for the 2020-21 school year back to Aug. 17, and the district will open the new year by utilizing a distance learning model for all students, LUSD officials announced Friday.

Annalynn Clark, shown watering plants Monday at her Lompoc home, has been named a finalist in Mayflower's national "Mover of Movers" contest. If Clark receives more votes than the two other finalists, she will win $25,000 that she intends to use to bolster an environmental club and gardening program she helped start last year at Lompoc Valley Middle School.

Annalynn Clark points to some of the "barren" outdoor space at Lompoc Valley Middle School. The teacher is a finalist in a national contest with $25,000 up for grabs. If she wins, Clark, who helped start an environmental club on campus, said she plans to install more plants and incorporate more educational outdoor opportunities at the school.