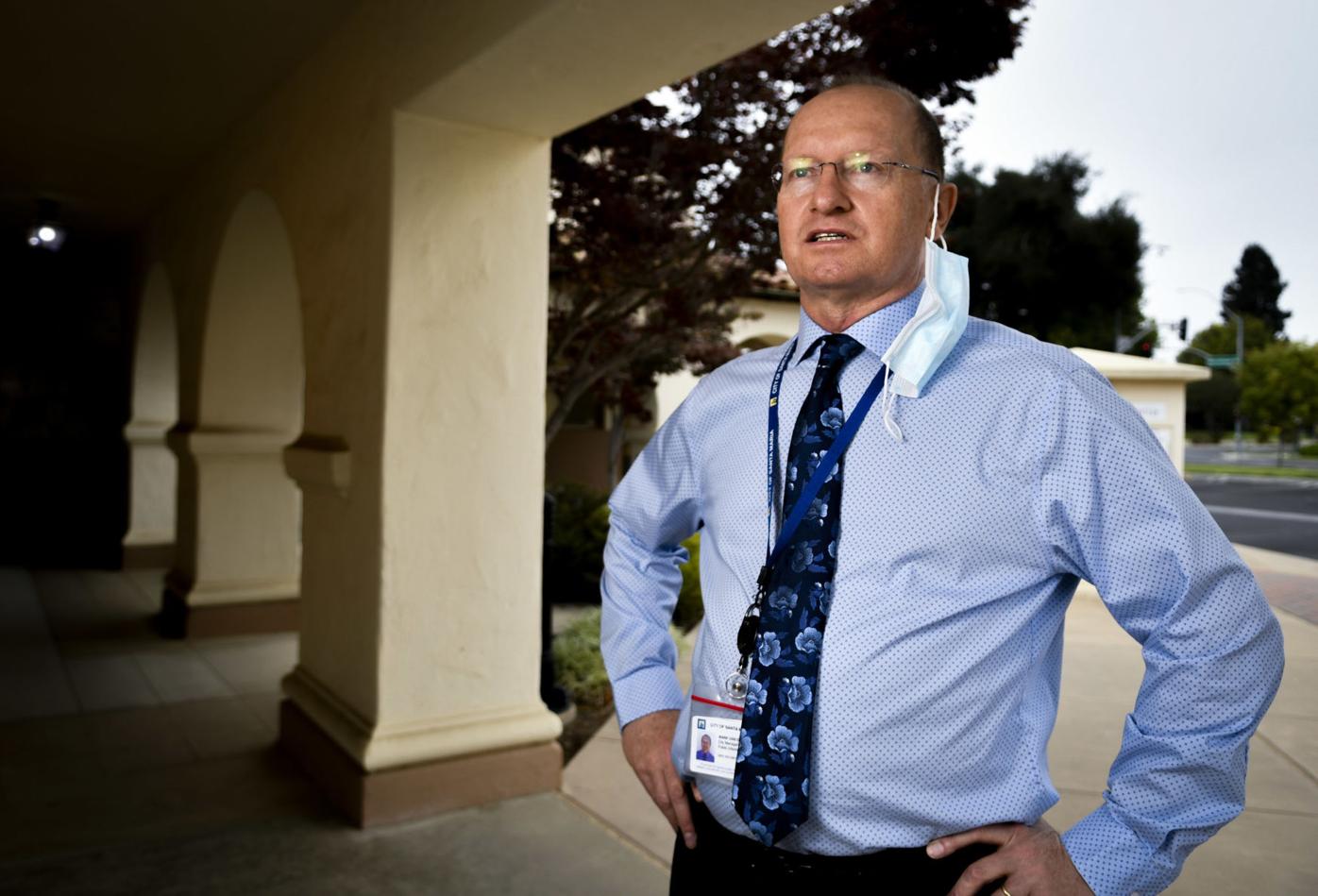 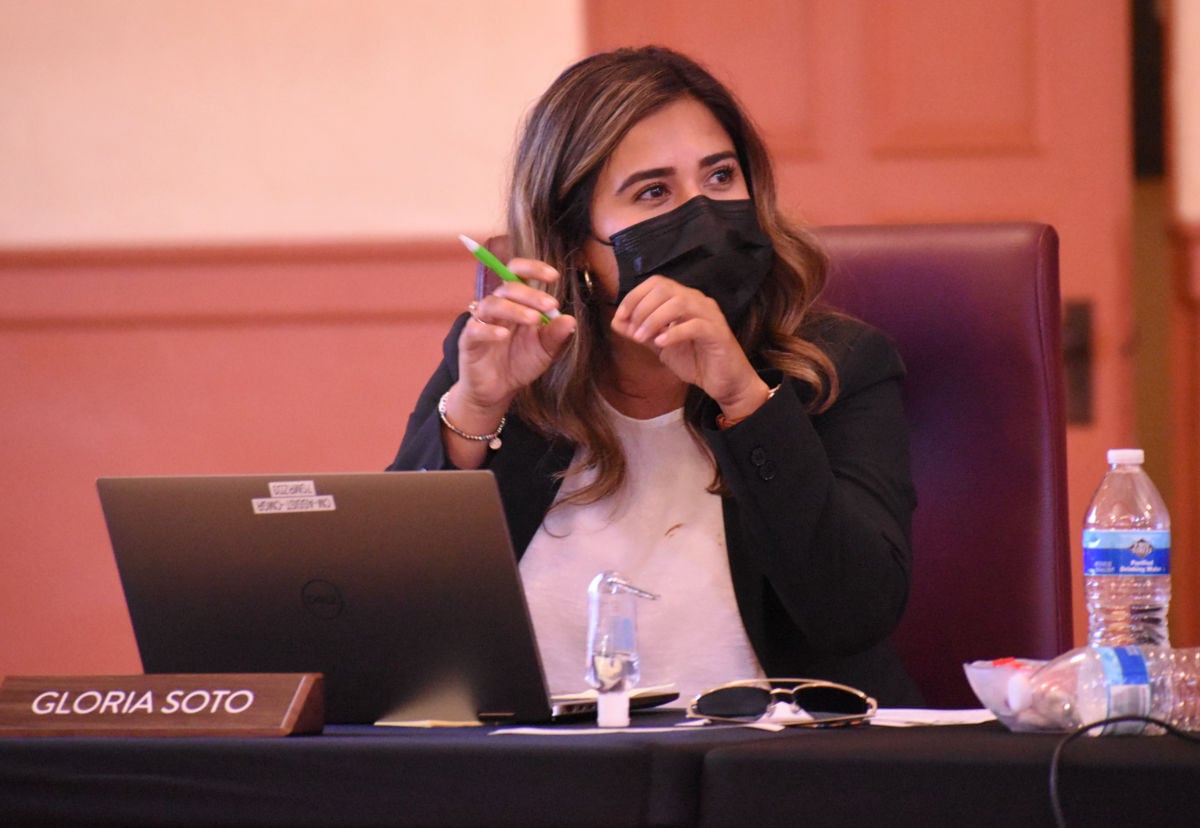 Santa Maria City Councilwoman Gloria Soto, pictured Sept. 7 at a council meeting at the Veterans Memorial Center, has advocated for increased outreach to the city's residents about COVID-19 throughout the pandemic, particularly for the city's Spanish-speaking and immigrant populations. 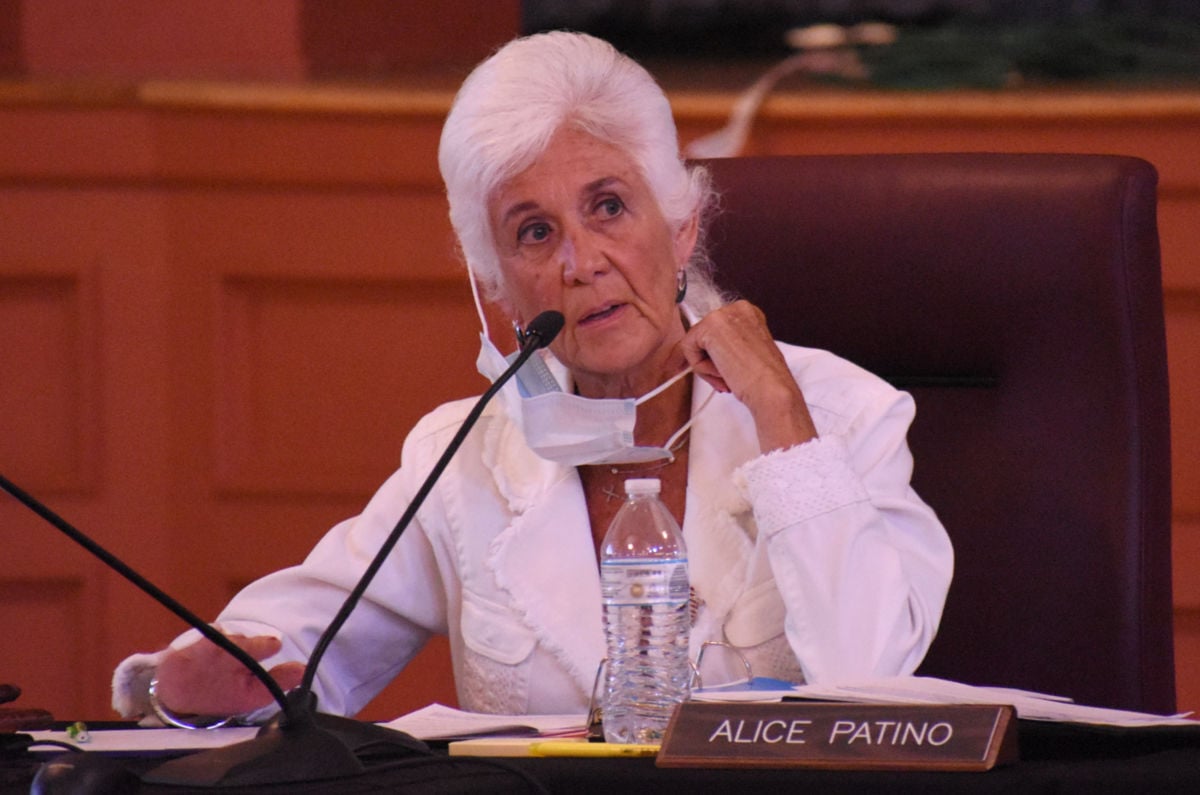 Santa Maria Mayor Alice Patino participates in a City Council meeting at Veterans Memorial Center on a recent Tuesday. Early in the pandemic, Patino pushed for more messaging to the Hispanic community, especially the Oaxacan population. 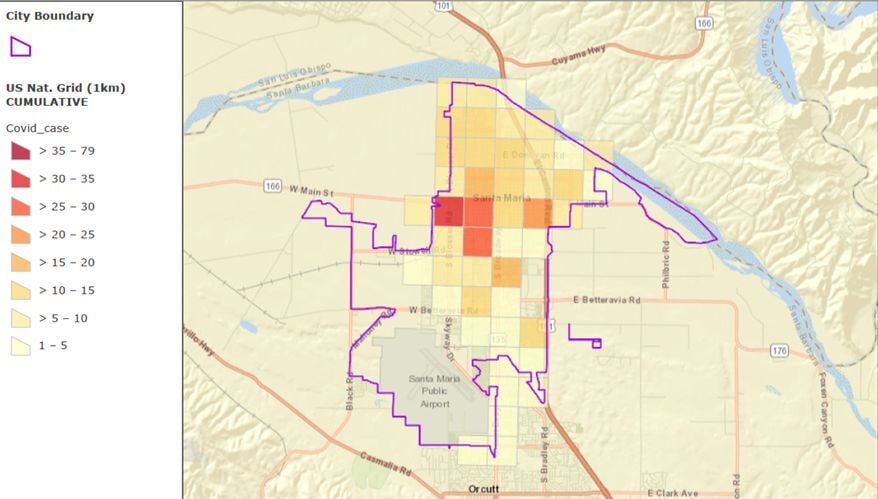 This map shared with the Santa Maria City Council in July 2020 outlines which square-mile areas in the city had the highest concentration of COVID-19 cases. The majority of cases were identified north of Betteravia and west of Broadway, with lower incidents of cases found south of Betteravia. 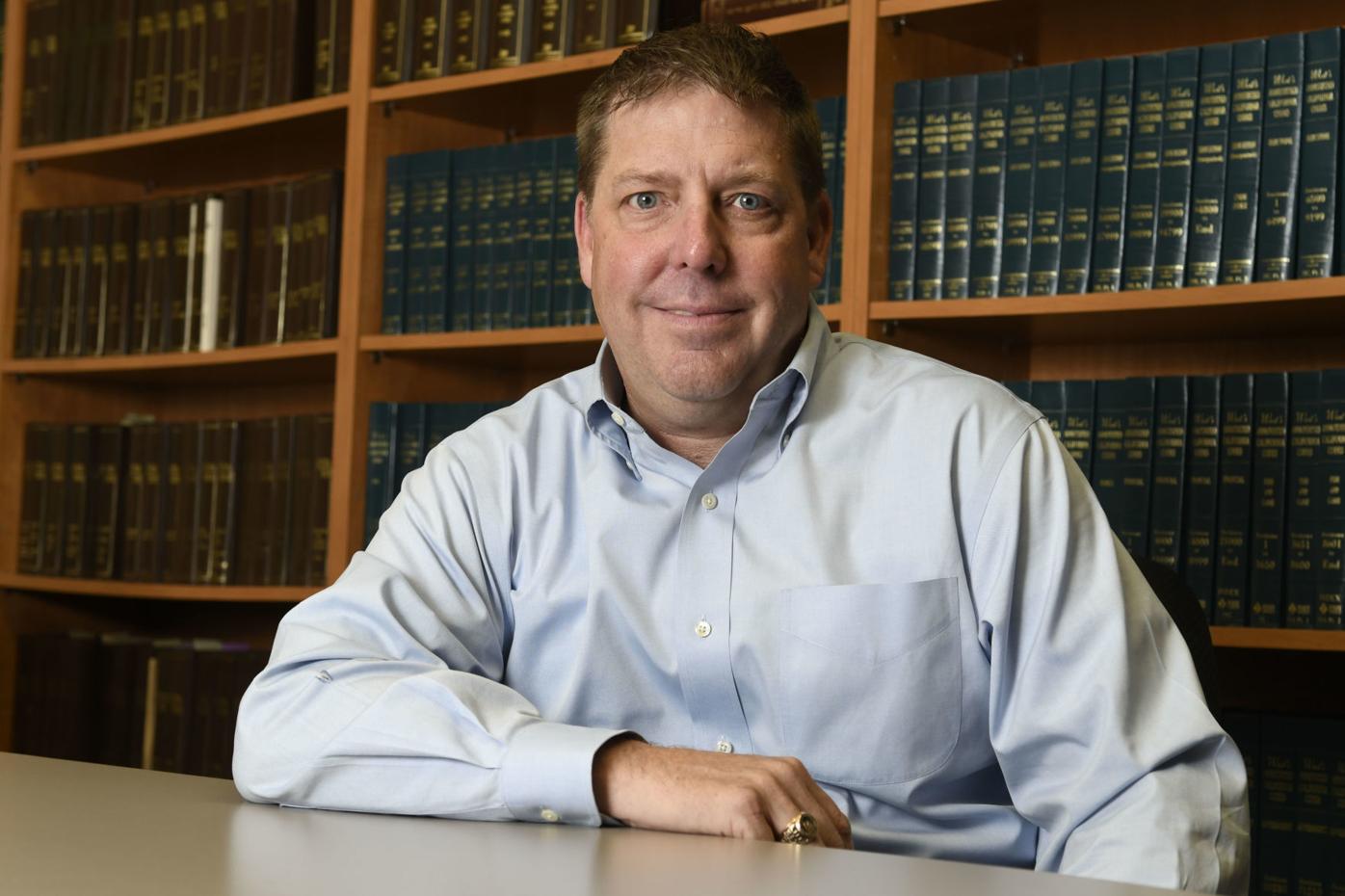 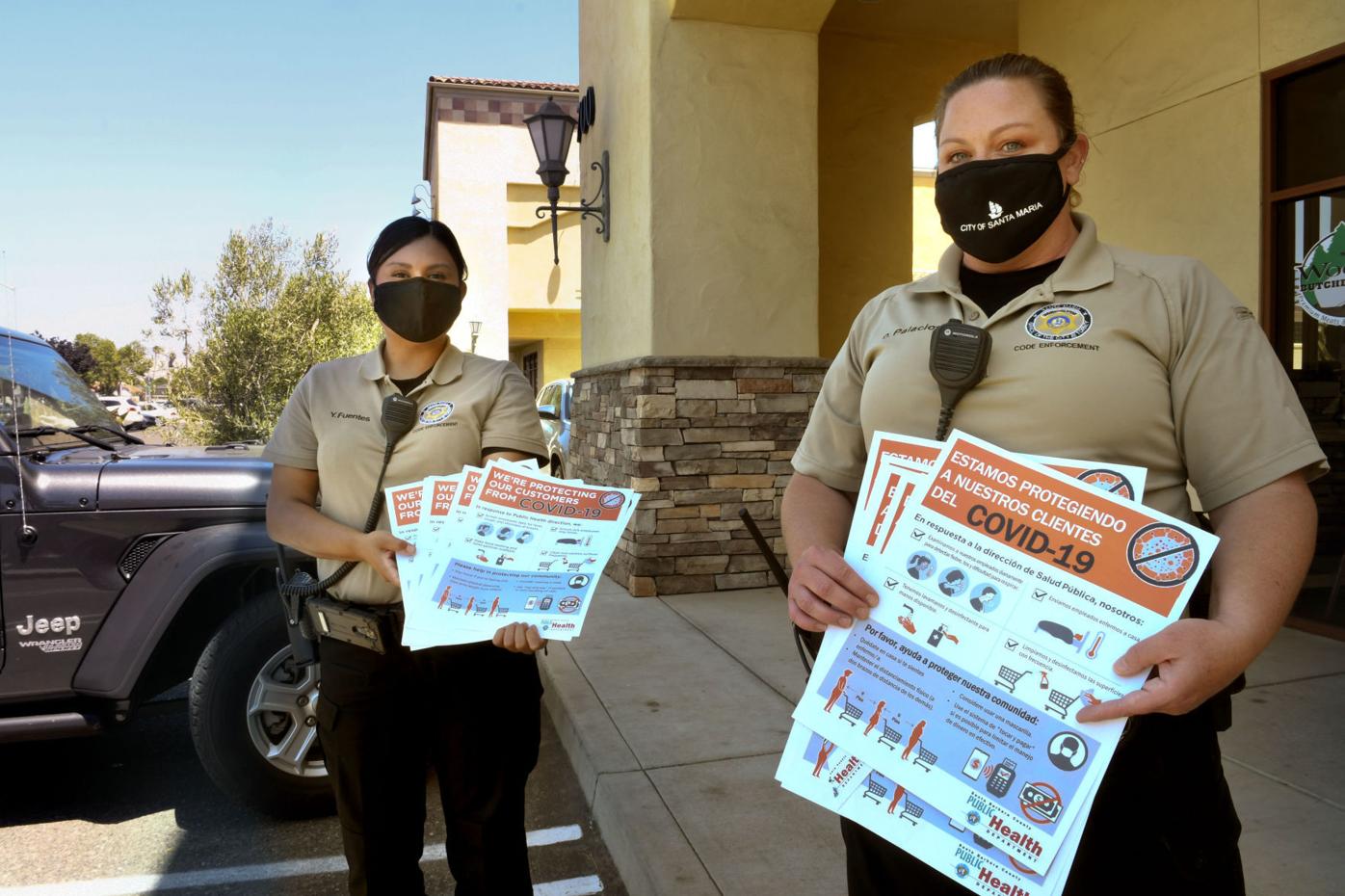 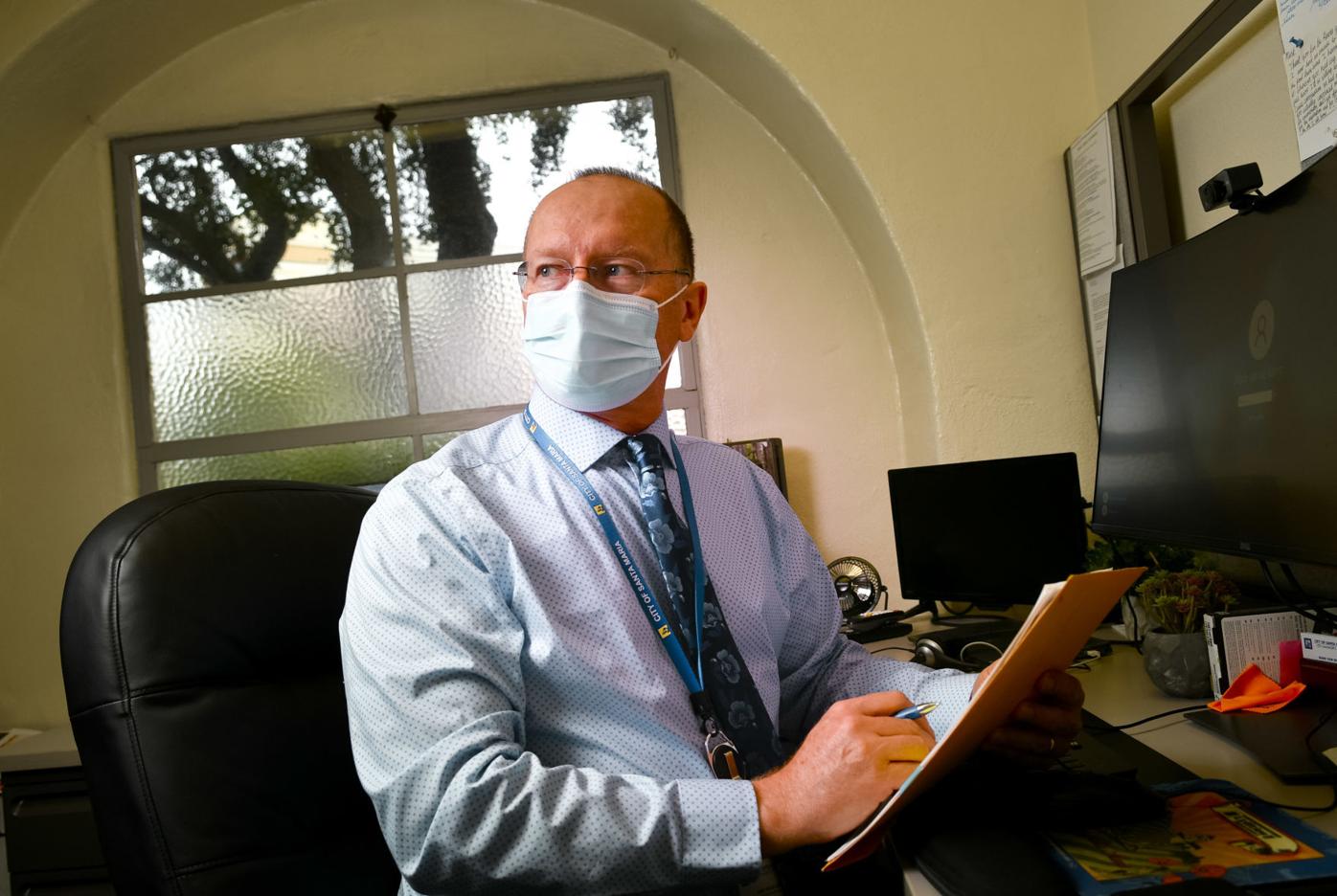 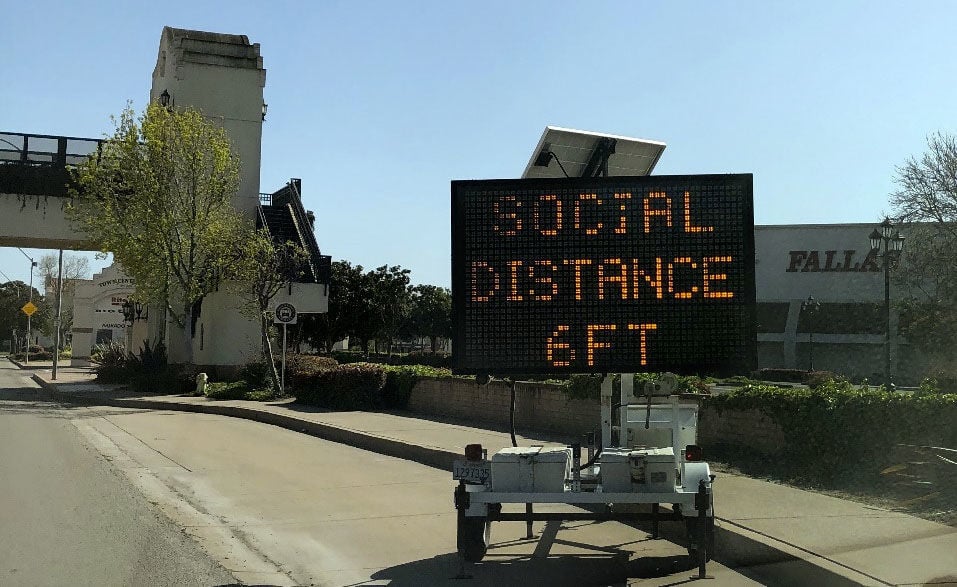 A lighted sign reminding residents of the order to maintain 6 feet of social distancing during the coronavirus emergency was placed on Broadway, just south of Main Street, in April 2020.

This graph from the Santa Barbara County Public Health Department illustrates how Santa Maria, represented by the top grey line, pulled far into the lead with total COVID-19 cases compared to other areas of the county, represented by other colors.

As COVID-19 began to spread through Santa Maria in early 2020, some residents raised concerns that the city's information about preventive measures was not reaching a majority of the population.

During March and April, Randy Jackson was one of dozens of city residents who contacted officials with observations about the communication gap, emailing Mayor Alice Patino on March 31. The Santa Barbara County Public Health Department had just begun sharing the location of confirmed cases, and by that day, 25 of the county's 99 cases were in Santa Maria.

"I have observed at public venues such as supermarkets and banks, a pattern of stark contrasts in the levels of social distancing," Jackson wrote in the email, obtained by the Santa Maria Times through a public records request. "This would appear to indicate that the importance of these preventive measures is not reaching a large segment of our city’s population. The recent spike in identified cases within Santa Maria would seem to support this."

Spanish is the main language spoken at home by 62% of Santa Maria residents age 18 and older, according to census data, and English is the principal language spoken in 33% of homes. Due to a lack of data collection, the number of Indigenous language speakers in the city is largely unknown.

At the same time Jackson was sharing his concerns, Patino and City Manager Jason Stilwell corresponded via email about a lack of action from the county Public Health Department in reaching non-English speakers.

“In my legislative meeting yesterday, I realized the outreach Public Health was supposed to be doing has not been done. We need to do more in brief messages to the Hispanic community, especially the [Oaxacan] population,” Patino wrote.

Over the next week, city leaders reached out to Public Health officials, sharing contacts for local Indigenous and Spanish-speaking organizations and news sources and also urging the department to share the load of spreading messages about handwashing and social distancing.

“In my opinion, we need to flood the market with hand-washing, don’t touch your face, surface disinfecting and physical distancing … cartoons, celebrities, grandmas, priests, kids, mechanics, cowboys, strawberry pickers, etc. on every market we can get into,” city spokesman Mark van de Kamp wrote in an email to Santa Barbara County spokeswoman Gina DePinto on March 31, 2020. “We need to bombard everyone with this daily everywhere they look. The clock is ticking on teaching people how to do this so that it is automatic.”

Over the course of the pandemic, Santa Maria city officials implemented various communication strategies that included placing street signs in strategic spots to encourage social distancing and masking, and distributing over 20,000 bilingual fliers about COVID-19 safety with utility bills.

Officials also fielded thousands of calls in a makeshift service center at the library, released short COVID-19 safety videos featuring an array of community members, and collaborated with local Indigenous and Spanish-speaking groups and news outlets to spread information across the community.

"We relied on partnerships with the nonprofits and other organizations in Santa Maria who have relationships throughout the Spanish and Mixteco communities," van de Kamp said. "One of my core beliefs is that the city is here to work for the community … we need to have that trust."

Despite its behind-the-scenes work, however, Santa Maria’s front-facing platform of information at city meetings, announcements about activities and budgeting has been limited mostly to English.

City meetings, many of which over the past year included COVID-19 updates, are only translated into Spanish if someone requests it. Upon such a request, six city employees certified in Spanish translation can take on the task, along with an outside translator if no one is available. Employees also help with recording voice messages in Spanish for the city's phone lines, according to van de Kamp.

“It took a while for the city of Santa Maria to know exactly where to plug in. So much of what we were waiting on was to get more guidance from the county." — Gloria Soto, Santa Maria City Council member

“The demand has not materialized to the level where we need [translation] for each meeting. We would like to see more, I think it would be useful to have it available, because we want more people to participate. We do make that known, that everyone is welcome,” van de Kamp said.

Santa Maria’s city government is not alone in offering limited content and information in Spanish. Only the city of Santa Barbara states that its City Council meetings are always translated into Spanish, while the cities of Lompoc, Solvang, and San Luis Obispo do not offer it automatically.

Santa Maria resident Adan Navarette said more proactive strategies are needed to engage the Spanish-speaking community, since many residents may not be aware such services exist.

“This is the work; working to make sure community services are reaching the people,” Navarrete said. "What the city can do is talk with us, and right now that’s not happening. They should talk to the parents in the community, and talk to them about what is happening during the pandemic.”

Changes, however, could be coming. In August, federal officials ordered Santa Maria to reexamine language access and cultural competency after concerns about discrimination were raised involving a now-retired H-2A housing city ordinance limiting where migrant agricultural workers could live in the city.

Rather than taking on a potential $400,000 fine by maintaining the ordinance, officials opted to repeal it and enter into an agreement with the U.S. Department of Housing and Urban Development (HUD) that requires, among other commitments, the development of a new Language Access Plan to ensure residents with limited English proficiency can access city services and programs.

Specifics of the city’s access plan and how it will be implemented are limited at this point, with the city still finalizing the plan and incorporating suggestions from HUD.

"The Language Access Plan is still in process, but it will include measures to ensure meaningful access to city programs and activities by Santa Maria residents who are of limited English proficiency. This includes providing oral and written language translation/interpretation when needed, staff training, and translation of 'vital' programs, notices and documents," said city Employee Housing Resource Officer Dana Eady.

A conservative approach and casting blame

While the city has worked hard behind the scenes to increase outreach during the pandemic, residents wanted more outward-facing support in the form of mandates and ordinances, like a local adoption of the state-level eviction moratoriums and stricter guidelines for businesses, according to data obtained through a public records request.

Several residents expressed fear of being evicted to city leaders, and requested that local landlords be reminded of the state-level requirements in the form of a local mandate, citing actions already taken in Santa Barbara, Goleta and San Luis Obispo County.

“I am a single mother and my [two] places of employment have closed,” wrote one resident, who identified as an “extremely concerned citizen,” in a March 30 email to van de Kamp. “My landlord is still expecting the full amount of rent, late fees will accumulate if not paid on time. Please explain how the residents of Santa Maria can be expected to shelter in place and pay their thousands of dollars of rent monthly at the same time.”

Santa Maria City Attorney Thomas Watson said initially that the city did not have the jurisdiction to make its own mandate beyond what was already outlined by the state. After more pushback, including an email writing campaign by local residents, the city formally recognized the state’s guidelines two weeks later, in early April, as part of the city’s emergency proclamation.

Tensions escalated, however, when Santa Barbara County Public Health Director Van Do-Reynoso shared a map highlighting the square-mile areas where most of the city’s COVID-19 cases had been confirmed. Among them were major portions of District 3, specifically north of Broadway and west of Betteravia Road — areas of the city that were being targeted for census outreach around the same time in 2020.

“Ironically, that was also the hard-to-count population for the census,” City Councilwoman Gloria Soto said. “It’s really high-density living quarters. Even if people wanted to socially distance themselves, for a lot of folks it was practically impossible to do that.”

According to Do-Reynoso, Santa Maria's status as a city with low health equity, combined with widespread noncompliance with health orders, was extremely concerning at the time.

“It worried me, too, because of the lack of compliance,” she said. “Early on, people were worried and people were anxious, but … as we evolved in our response efforts and our engagement, I think the partnership got better.”

It was unclear to the city and Public Health Department at the time why the spread was so high, and exactly how to stop it.

What city officials did agree on was a need for more collaboration with the county, partially in the form of data-sharing to help identify areas of spread. Stilwell said the city has never received the level of data that would allow them to see where cases were proliferating in the city, which they hoped would allow for more targeted outreach.

Researchers estimate there to be approximately 80 variants of Mixteco alone, disrupting the assumption that Mixteco is a uniform written and oral language and illustrating the need for targeted outreach in specific variants.

The Indigenous population found in Santa Maria is made up largely of individuals from the Oaxacan town of San Juan Piñas, where the main variant is known geographically as Mixteco de oeste alto. Many Mixteco speakers refer to their traditional dialects as "the language of the rain."

Over the course of the pandemic, interpreting organizations such as Herencia Indigena have provided informational COVID-19 videos focused on vaccines, the delta variant, and different health orders in several Mixteco variants from Guerrero and Oaxaca to reach different populations.

An estimated 25,000 Indigenous immigrants live in Santa Barbara County. As of 2008, Santa Maria was the second-most popular area in the state for Indigenous farmworkers.

Editor's note: This is the second of four stories in the weeklong series "COVID Hot Spot: an at-risk city" produced in partnership with the Center for Health Journalism, investigating the risk factors and decisions that allowed COVID-19 to spread disproportionately throughout Santa Maria over the past year and a half.

This is the first of four stories in the series "COVID Hot Spot: an at-risk city" produced in partnership with the Center for Health Journalism, investigating the risk factors and decisions that allowed COVID-19 to spread disproportionately throughout Santa Maria over the past year and a half.