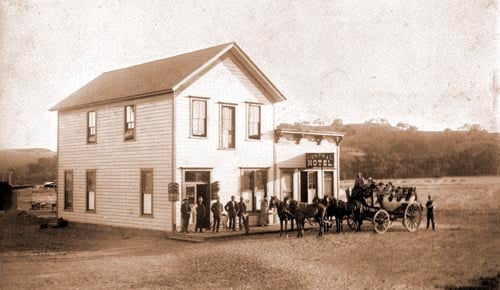 Mattei’s Tavern, shown in 1888 soon after it was built, was originally called The Central Hotel. 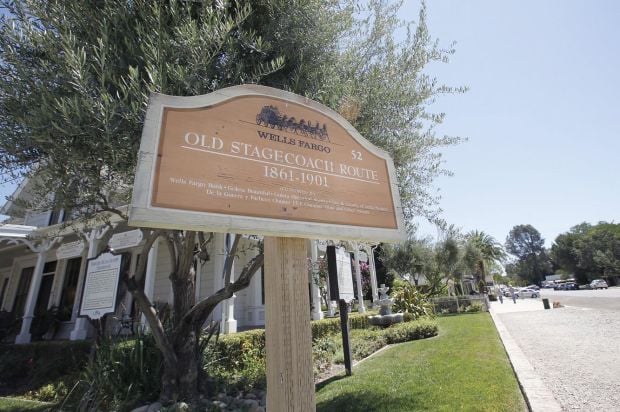 It only lasted 40 years.

But it remains one of the most romanticized epochs in county history.

Stagecoaches rattled over San Marcos Pass, carrying mail and passengers, from the 1860s to 1901, when the first railroad train went through between San Francisco and Los Angeles, and the stagecoaches died.

Developed by Goleta resident Patricia Corwin and financed largely by Wells Fargo Bank, the signs start at Santa Barbara’s Arlington Theater, once the site of the old Arlington Hotel where passengers began the arduous eight-hour trip over the Santa Ynez Mountains.

Here the route once diverged. The original route took stagecoaches over what was known as Slippery Rock. Two decades later, the route moved a mile east to Old San Marcos Road. Both routes are marked by signs.

While several signs appear on San Marcos Road, there are none on Highway 154, where Caltrans forbid them, said Corwin. However, several signs mark one-time stagecoach stations and meal stops on nearby Kinevan and Stagecoach Roads at the top of the pass. One stop, Cold Spring Tavern, still remains.

Signs resume at Highway 246, entering Santa Ynez, where one of the more elaborate signs stands at the intersection of Sagunto and Edison Street. A sign, with a picture, marks the site of the old College Hotel, where stages once stopped.

As the route heads north on Edison to Baseline Avenue, signs become more numerous. In the rural area, you almost feel you are returning to yesterday. Turning right on Alamo Pintado Road, the route ends at Mattei’s Tavern. Despite construction, the last sign, No. 53, is visible on a porch wall.

The trip ends in a flurry of carpenters’ tools.

Roadside Attractions is a weekly chronicle of sights along the Central Coast’s highways and byways. Sally Cappon can be reached at sjcappon@aol.com.

Mattei’s Tavern, shown in 1888 soon after it was built, was originally called The Central Hotel.