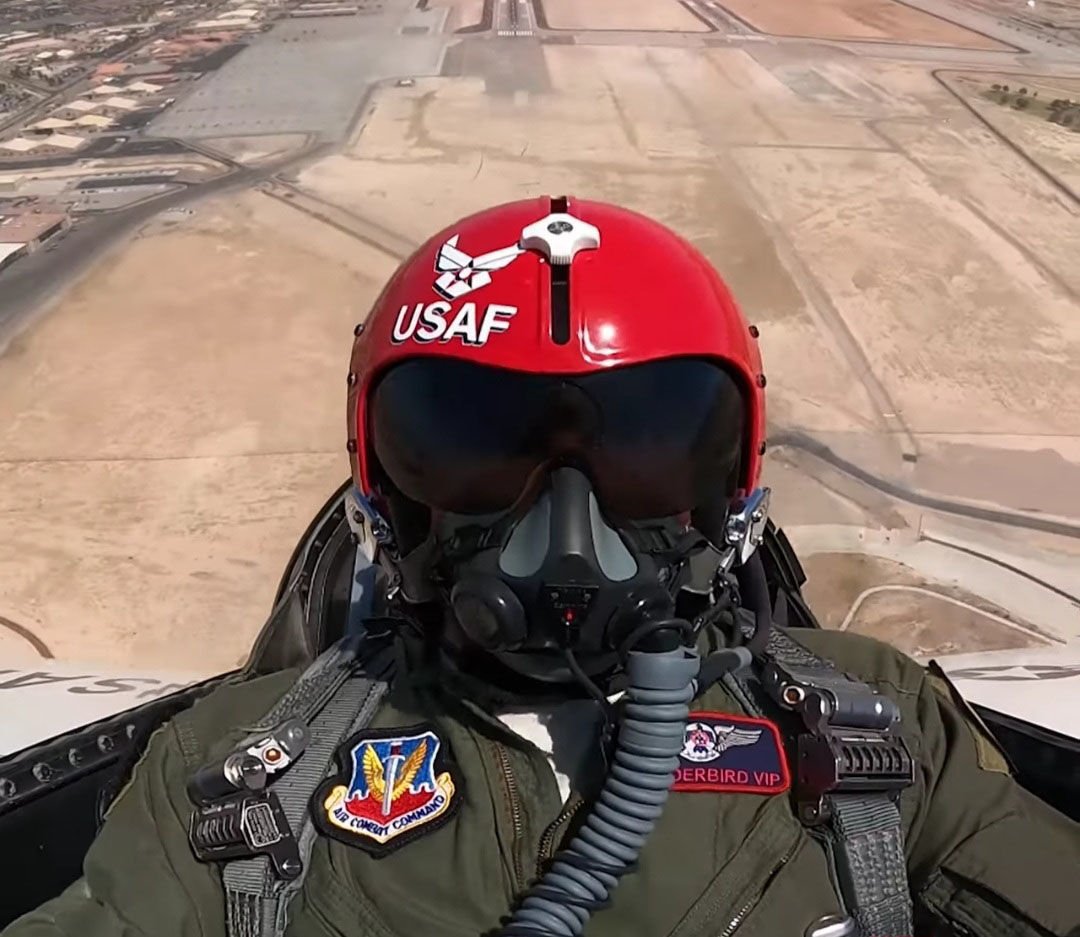 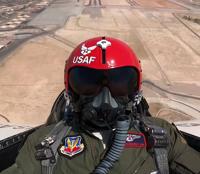 Former Ultimate Fighter Championship champion and UFC Hall of Famer Forrest Griffin in the backseat of a U.S. Air Force Thunderbird jet upon takeoff at Nellis Air Force Base, Nevada, Apr. 23, 2021. Air Force Recruiting Service recently teamed up with the Thunderbirds to fly Griffin. Since the UFC has a sizeable social media following, flying Griffin provided a chance to share his experience with the Air Force to a large audience. 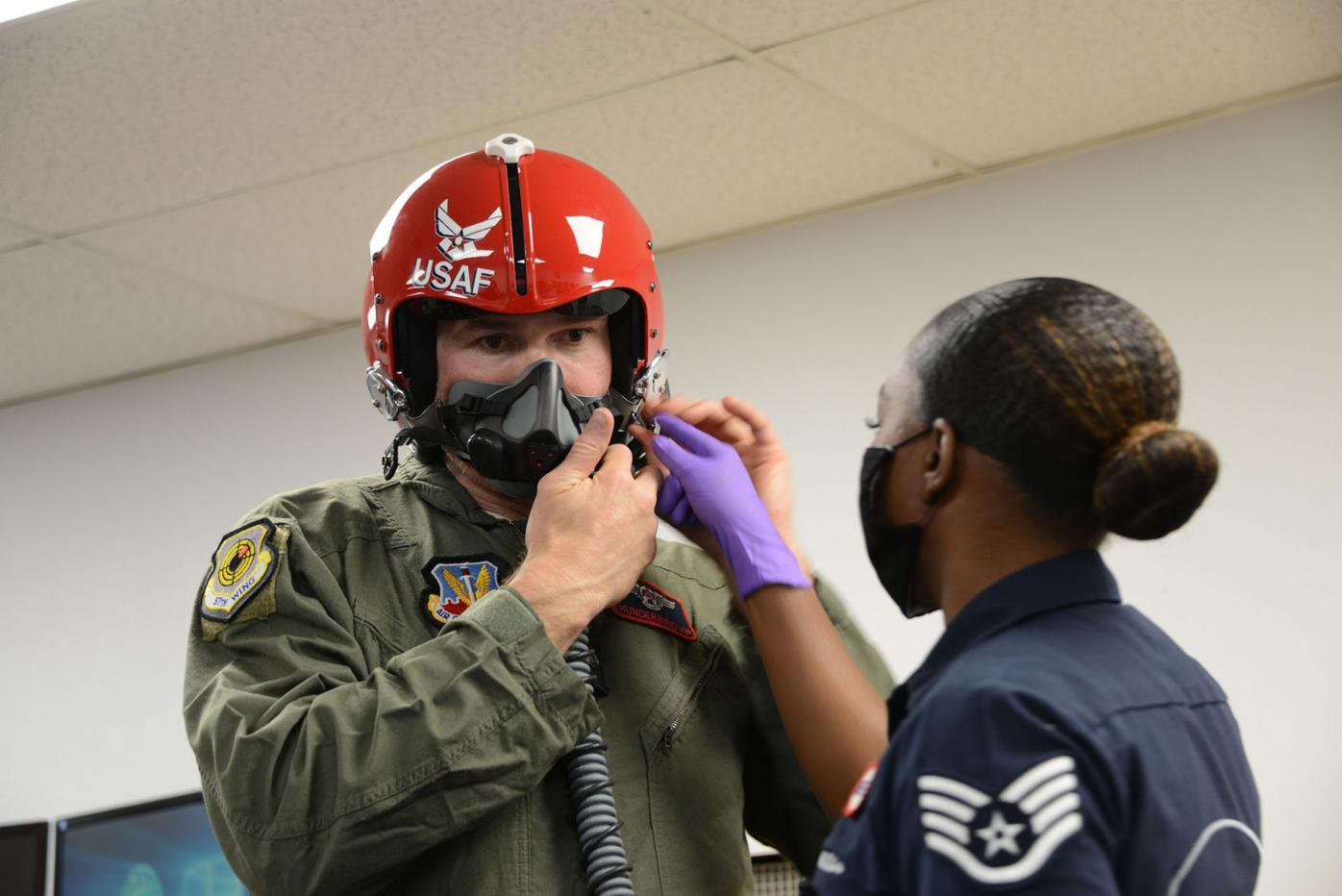 Former Ultimate Fighter Championship champion and UFC Hall of Famer Forrest Griffin getting fitted with a helmet prior to flying with the U.S. Thunderbirds at Nellis Air Force Base, Nevada, Apr. 23, 2021. 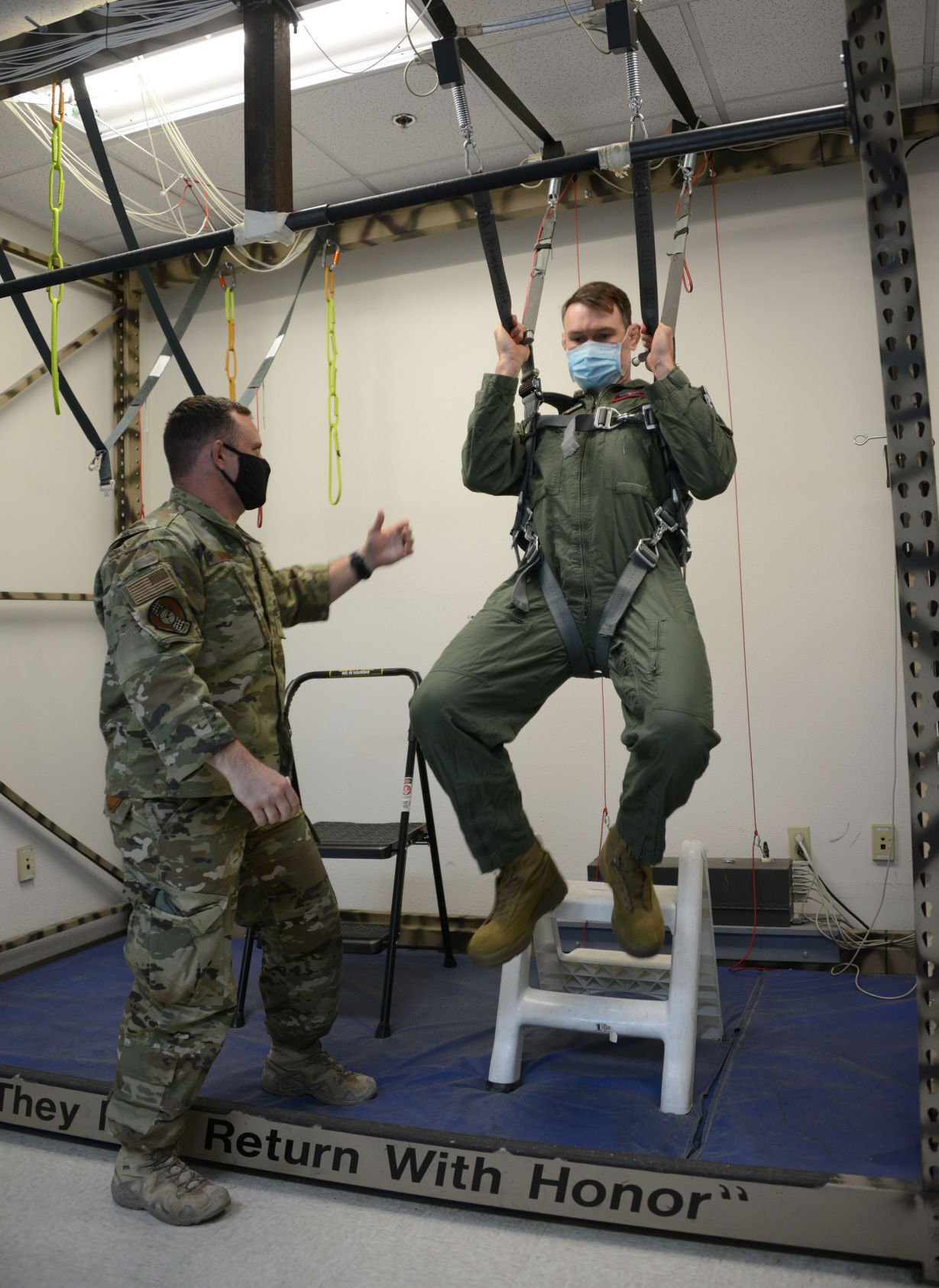 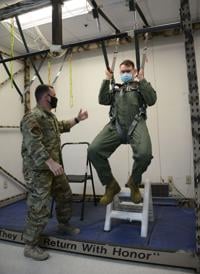 “The UFC and its fighters are huge supporters of the military and have a very strong presence on social media,” said Master Sgt. Daniel Bedford, AFRS national events program manager. “We sponsor UFC with a special focus on Special Warfare, a very difficult area to recruit. UFC and Special Warfare share many of the same characteristics.”

Since the UFC has a sizable social media following—28 million on Facebook, 17.7 million on Instagram, 8.1 million on YouTube and 7.3 million on Twitter—flying Griffin provided a chance to share his experience with the Air Force to a large audience.

For Griffin, getting to fly with the Thunderbirds was a once-in-a-lifetime experience.

On March 6, 2020, the Department of Defense Instruction 5200.48, Controlled Unclassified Information, was published. This instruction served a…

“The flight was amazing,” Griffin said. “People probably noticed that I used the word ‘amazing’ about 30 times immediately after I got on the ground. I can honestly say flying with the Thunderbirds was one of the most incredible things I’ve ever done in my life, and I’m honored to have shared as much time as I have with the men and women of the Air Force.”

While the flight definitely impressed Griffin, he was equally impressed with the Airmen he had the chance to interact with as he trained for his time in the air.

“Those Airmen have to be perfect every day because one missing bolt or one miscalculation of fuel can get someone killed … and, oh by the way, also destroy a $30 million aircraft,” he said. “I can’t imagine how much intelligence and concentration this takes. The other thing that impressed me is their ability to communicate as a team and work with other people from all over the country with very different backgrounds.”

Before Griffin became a champion in the UFC’s octagon, he was a police officer in Augusta, Georgia, so he knows a thing or two about service.

“Forrest is a great ambassador for the UFC,” said Master Sgt. Michael Guhr, AFRS national advertising branch superintendent. “He is an individual who had a career path and was working as a police officer. He decided not once but twice to take a detour with his life and take a chance in the octagon. He earned his way and is now a hall of famer. I feel this epitomizes many Airmen who start on one path, notice something is missing, and take a chance and decide to serve their country in the Air Force. Many have found a great deal of success and have fulfilled goals they never thought possible.”

“I truly believe the Air Force is a great career,” Griffin said. “Not only will you get the discipline and skills that come with any military position, but you get the technical and technology skills that are becoming more important for employers.”

Griffin has collaborated with the military throughout his career. AFRS recently filmed a production with UFC and Special Warfare at the UFC Athletic Performance Center in Las Vegas. Griffin was a big part of that production as a moderator and a participant.

“I’m always excited to get there and play the part of being in the Air Force,” he said. “I’m always left with how impressive the men and women are who do this every day.”

Griffin currently serves as the vice president of athlete development at the UFC Performance Institute, where he works with top-flight athletes.

“I deal with world-class athletes every day who have amazing physical and mental toughness,” he said. “But the combination of mental and physical fortitude required to control these aircraft under such intense physical strain is hard to conceive. The Gs (G-force) kicked my butt. I can’t imagine having to pilot the aircraft while under that physical stress. I went straight to work after the flight, laid my head down on my desk for about an hour and then accepted that I was too exhausted to get anything done, went home and laid in bed.”

“Flying with Forrest was awesome,” Markzon said. “I really didn’t expect anything less from a retired UFC fighter. A big guy like that knows a lot about pain and punishment, but he did awesome in the jet. We pulled 9.1 Gs, did all of our rolling maneuvers, flew inverted and did a little bit of a low-level out there, and he just did a great job.”

For AFRS and the Thunderbirds, recruiting is a shared mission. Markzon realized the potential of an event like flying a UFC fighter.

“The mission of the Thunderbirds is to recruit, retain and inspire,” he said. “Part of that mission is to introduce folks to the Air Force, the Thunderbirds and the military in general. UFC is a big company with a wide reach around the world, so to fly someone like Forrest in one of our jets gives us an immeasurable amount of recruiting opportunities.”

“The professionalism of the Thunderbirds is always second to none,” Guhr said. “It is easy to see how a VIP like Forrest Griffin would be excited for this opportunity, but it’s also important to note how excited the Thunderbirds were to host such a great American for the day. His infectious smile and graciousness with his time was a true morale booster for the Airmen in the Thunderbirds. From the time he arrived to the time he departed, he was met with smiles and laughter as well as an excitement to show what they do. These Airmen are true professionals.”