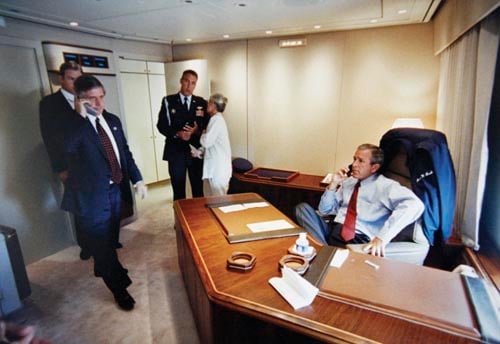 Then-Lt. Col. Tom Gould, background, who served as the Air Force military aide for President George W. Bush, speaks with staff members as the president takes a phone call aboard Air Force One on Sept. 11, 2001. 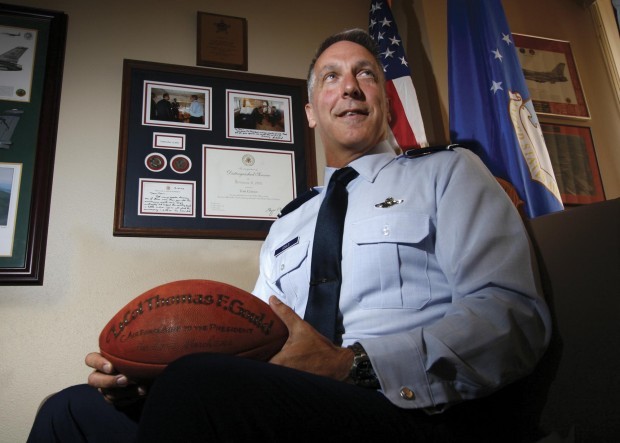 Brig. Gen. Tom Gould, 14th Air Force vice commander at Vandenberg Air Force Base, was the Air Force military aide for President George Bush and was with the president during the terrorist attacks on Sept. 11, 2001.

Gould coordinated the president’s flights and carried the “nuclear football,” a briefcase containing the launch codes for nuclear weapons.

Ten years ago, then-Lt. Col. Thomas F. Gould’s stint as a military aide to President George W. Bush was supposed to be low-key while the boss read to schoolchildren in a Florida classroom.

The brigadier general, who is now assigned to Vandenberg Air Force Base, certainly never expected to be a key part of the history-making day alongside the commander in chief as the nation came under attack Sept. 11, 2001.

Gould, currently the vice commander for 14th Air Force at Vandenberg, recently shared his rarely told story about serving as a military aide and flying aboard Air Force One with Bush and other key advisors in the hours following the attack.

“The most sobering part of the day,” Gould said, came as he peered out the window while the plane returned to Andrews Air Force Base, Md., near Washington, D.C. He spotted the distinctive Washington Monument and then saw smoke rising from the Pentagon.

It hearkened back to a statement his boss had made earlier in the day.

“It was very insightful. We all thought about it, but none of us articulated it. He said, ‘This fundamentally changes the way we will fight wars in the future,’ which 10 years later proves his point,” Gould said.

Explaining his duties that day, Gould said it’s important to understand the chores of the five presidential military aides — a coveted assignment held by representatives of the Air Force, Army, Navy, Marines and Coast Guard.

It’s a job with three purposes, primarily being emergency action officer for the president along with military representative for official functions and personal aide on weekends.

“I was there to ensure that the commander in chief had direct access to his military commanders, specifically in the realm of if we were under a nuclear attack I would present the president with his options,” Gould said.

Military aides carry the so-called “nuclear football,” a briefcase packed with critical codes to initiate a nuclear attack and other emergency operations details, if needed while the president is away from the White House. The nickname stems from the fact that the aides are always handing it off, Gould said.

Aides not assigned to the president on a specific day play an unofficial game of leap frog, heading to a site of a future visit to plan for various contingencies.

On the morning of Sept. 11, 2001, Gould, as the courier military aide, actually was off duty. The advance aide, a Marine Corps officer who had scouted the Florida locales, remained by the president’s side during the school visit.

“Four other military aides had nothing to do with 9/11 that day,” Gould said. “It was pure luck in timing that I happened to be in Florida.”

Off-duty for a few hours, Gould was running on a treadmill when his pager went off, as the Presidential Emergency Operations Center provided a heads up that an airplane had crashed into the World Trade Center in New York at 8:46 a.m.

He finished his workout and called his wife. A trained pilot, Gould automatically dissected how such an accident could occur. When the second plane hit shortly after 9 a.m., he abruptly ended the phone call with his wife.

“At that point I know something has happened,” Gould said. “It’s bigger than an accident. It’s an attack of some sort. I don’t think I thought through what kind of attack it was, but I knew it was something concerted.”

In his role, Gould had tactical control of presidential aircraft and immediately alerted the Air Force One pilot to recall the aircraft crew and be ready to depart as soon as possible.

When the motorcade arrived at the plane, Gould’s training kicked in as he met the Marine military aide under the nose of the plane to retrieve the “nuclear football.”

The original plan called for returning to Washington, D.C., but then the third plane hit the Pentagon about 9:37 a.m. A fourth crashed into a Pennsylvania field shortly after 10 a.m.

“At this point we don’t know the scope of this attack and what’s in front of us,” Gould said.

At 9:56 a.m., Air Force One took off from the Sarasota, Fla., airport. With uncertainty about whether other planes had been hijacked, and knowing those that were came from the East Coast, they made the decision to fly west. Gould notified the Pentagon with three requests — fighter jets for escort, refueling tanker and an Airborne Warning and Control System or AWACS to provide the ability to “see” around the plane.

Gould’s office at Vandenberg is decorated with pictures, including one showing what he said was a frequent scene that day on Air Force One — him huddling with the chief Secret Service agent and presidential Chief of Staff Andrew Card as they weighed the options, then advised the president.

“During one of those conversations he said, ‘I need to address the American people in the next hour.’ ...,” Gould said, describing Bush as adamant. “He was concerned from his perspective that the leader of the United States shouldn’t be in an airplane talking to the American people over a radio, which is the only capability we had at the time.

Plans were made to land so that Bush could address the nation.

“Like any good Air Force officer, I recommended an Air Force base,” Gould said half-jokingly.

He also knew Barksdale Air Force Base, La., had a secure location with good communication equipment and the ability to meet the presidential needs.

Gould called Barksdale Air Force Base, La., alerting that the commander in chief would be landing and issuing a laundry list of requests so the president could address the nation.

It was fortuitous pick, Gould learned. The B-52 bomber base was in the midst of the largest peacetime exercise and ready to support the urgent visit.

Air Force One touched down at 11:45 a.m., and the president delivered his remarks, which were recorded and broadcast to the nation.

After additional discussion and with various reports throughout the day of threats against the presidential plane, Air Force One left Barksdale and headed to Offutt Air Force Base, Neb., at the recommendation of Vice President Dick Cheney.

With four airplanes purposely crashed and aircraft still flying from Asia and Europe, officials weren’t certain if the threat was over.

“We just didn’t know where the next target was going to be,” Gould said, recalling lots of discussion on the decision to authorize military pilots to shoot down civilian aircraft.

“That decision was not made lightly, but the president had no other options,” Gould said.

So much uncertainty led Gould to believe they would remain at Offutt for a couple of days.

However, an emphatic statement by President Bush during a 3:15 p.m. video conference with his National Security Council changed that plan.

“Literally, in the middle of this meeting, the president declared very forcefully that ‘I will be back in D.C. in two and a half, three hours.’ We had been advising him all morning, “Sir, we can’t go back to D.C. We have to fly around for a while.’”

Gould slipped a note to Chief of Staff Andrew Card, saying they could return but should relocate Vice President Dick Cheney to ensure that both men weren’t in the same area in the event of another attack.

“We got back in the airplane and flew back to Washington, fighters on our wings.”

Air Force One, carrying the commander in chief, landed at Andrews AFB at 6:45 p.m.

But Gould’s shift wasn’t over yet. Nor were the scares.

As he settled into his bunk in the White House that night, a knock on the door warned of an inbound plane. Gould joined the president, first lady and Secret Service agent heading to a bunker below the White House.

It turned out to be a false alarm involving a military aircraft miscommunication with air traffic controllers.

Luck of timing led to his location aboard Air Force One on that history-making day, Gould said.

“I feel fortunate that I had the opportunity to stand alongside some of the most influential people in the world on such an important day and see how dedicated they were to taking care of the American people. The president and his staff, every decision they made was about protecting the American people.”

He and his family — wife Stephania and sons, Joseph, a senior at Cabrillo High School, and Thomas, a sophomore at Texas A&M Corps of Cadets — typically have spent the anniversary as a quiet day of reflection.

As he reflected on the events of the day, Gould noted it fundamentally changed everything, including how the United States addressed national security and interacted with other countries.

The attacks made him appreciate the American spirit, Gould said.

“Where we’ve come since 9/11 is truly a testament to the resiliency of New York, of our nation, of our military, of our soldiers, sailors, airmen and Marines to overcome a setback, if you will, rise to the occasion and beat the challenge,” Gould said.

The new year will bring a new job for Brig. Gen. Thomas F. Gould, the 14th Air Force vice commander who will leave Vandenberg Air Force Base a…

Then-Lt. Col. Tom Gould, background, who served as the Air Force military aide for President George W. Bush, speaks with staff members as the president takes a phone call aboard Air Force One on Sept. 11, 2001.

Brig. Gen. Tom Gould, 14th Air Force vice commander at Vandenberg Air Force Base, was the Air Force military aide for President George Bush and was with the president during the terrorist attacks on Sept. 11, 2001.

Gould coordinated the president’s flights and carried the “nuclear football,” a briefcase containing the launch codes for nuclear weapons.