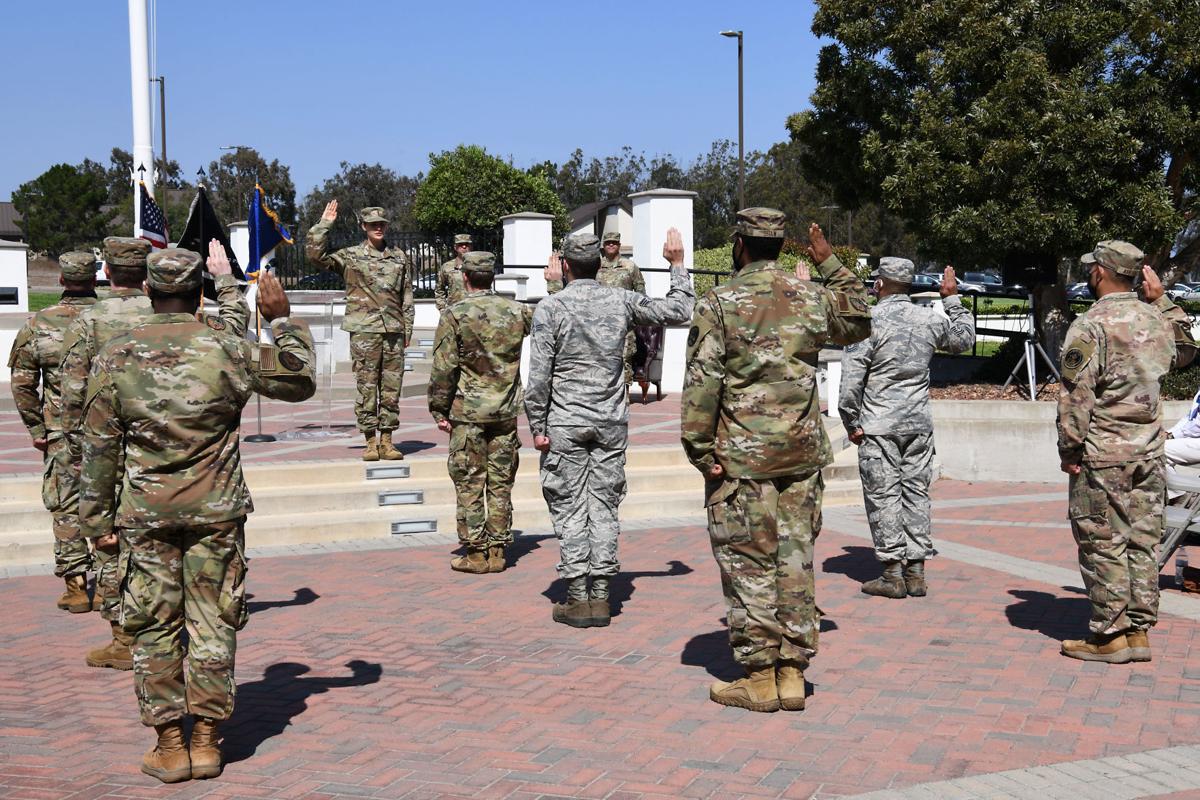 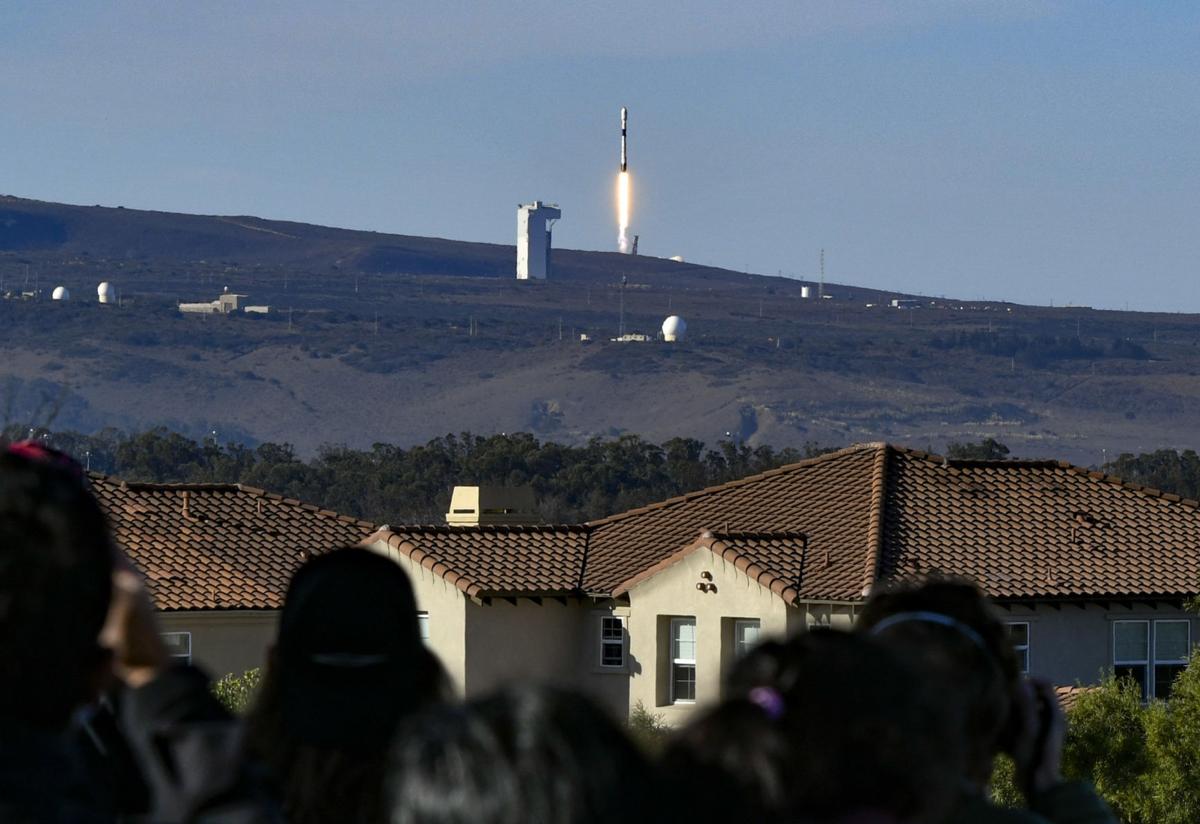 A SpaceX Falcon 9 rocket carrying the Sentinel-6 Michael Freilich mission lifts off from Vandenberg Air Force Base on Nov. 21, 2020. In the foreground, spectators watch from a park in Vandenberg Village.

Rep. Salud Carbajal and Sens. Dianne Feinstein and Alex Padilla also requested more information about why Vandenberg AFB was knocked off the list to house headquarters, according to a March 11 letter sent to Secretary of Defense Lloyd Austin.

Additionally, the letter recommended that officials consider locating Space Training and Readiness Command, or STARCOM, which would serve as the parent organization responsible for the education of several U.S. Space Force units, at Vandenberg AFB.

"We believe that Vandenberg AFB will be a top-tier candidate due to its existing training assets, including the 533rd Training Squadron," according to the letter.

The squadron is a unit that trains Space Force guardians in space warfare, including satellite command and control. The squadron was assigned to the authority STARCOM's Colorado-based provisional unit during a ceremony at Vandenberg AFB in September 2020.

"We look forward to learning more about the methodology that will be used in this basing decision and respectfully request that you give Vandenberg AFB all due consideration during the evaluation process," the letter continues.

In a letter sent to Air Force Secretary Barbara Barrett, Rep. Salud Carbajal and Sen. Dianne Feinstein sought a clarification on the selection process, specifically requesting information about how the base was evaluated.

The letter is a follow-up to one sent to then-Secretary of the Air Force Barbara Barrett in December seeking clarification about why Vandenberg AFB was excluded from the list of finalists for U.S. Space Command headquarters.

In 2019, Vandenberg Air Force Base was initially included on a list of top three finalists to host Space Command, which was formally established in December 2019.

Then, on May 15, 2020, Air Force leaders issued a new point system explaining how the selection process works, according to Air Force Magazine. John Henderson, the assistant secretary of the Air Force for installations, called for "eligible communities to self-nominate" to serve as the new command's host.

To qualify, communities must meet several criteria, including a location "within the largest 150 metropolitan areas in the country, within 25 miles of a current military base and have a livability index score of 50 or more points out of 100 based on ratings from the American Association of Retired Persons Policy Institute, which grades quality of life.

As recently as 2018, Lompoc and Santa Barbara County had overall livability scores of 53 and 52, respectively, according to the AARP index, which also rated "civic and social engagement" and "opportunity" in the two areas at 25 and 49 and 30 and 49, respectively, which is below the 50 threshold.

California was the only state to be included in 2019, then later excluded under the new selection process, which came after the governors of Texas and Florida protested and the two states were later added to the second list of finalists, according to the letter.

Feinstein and Carbajal requested evaluation metrics used to determine why Vandenberg AFB was left off the finalists list, which they said they never received, despite multiple requests.

They cited the base's proximity to the Space and Missile Systems Center at Los Angeles Air Force Base as to why Vandenberg was a prime candidate for Space Command.

On Feb. 19, the Department of Defense Office of Inspector General announced that it will investigate whether the Air Force "complied with DoD" policies, "used objective and relevant scoring factors," and "accurately and consistently" calculated costs and other factors among the six candidate locations.

Vandenberg Air Force Base was originally included on a list of three finalists for the U.S. Space Command in 2019, but was excluded from a second list of six finalists following a new point system issued by Air Force leaders in May 2020 and after the governors of Texas and Florida protested. The states were included in the new list issued in November 2020.

In January, U.S. military officials selected the Redstone Arsenal in Huntsville, Ala. to serve as host for U.S Space Command's permanent headquarters.

On Feb. 19, the Department of Defense Office of Inspector General announced that it will investigate whether the Air Force "complied with DoD" policies, "used objective and relevant scoring factors," and "accurately and consistently" calculated costs and other factors among the six candidate locations.

On May 15, 2020, John Henderson, the assistant secretary of the Air Force for installations, called for “eligible communities to self-nominate to serve as the host for U.S. Space Command, according to Air Force Magazine.

The nominations will be evaluated on the following criteria for a total of 100 possible points:

Vandenberg CrossFit group a product of resilience and commitment to fitness

Some would say it takes a unique form of resilience for military members who make a permanent change of station (PCS) every few years to adapt and rebuild their social networks in new locations. For a local group of CrossFit enthusiasts on Vandenberg Air Force Base, their shared passion for fitness and achieving their personal best propelled them to create their own close-knit exercise group, which also paved the way for each to place in the top 10 percent of a recent CrossFit competition.

The 355th Wing flies toward the future

The needs of tomorrow’s Air Force must be met today, and the 355th Wing remains on the leading edge of this effort to ensure its continued ability to wield lethal, ready combat airpower anywhere, anytime.

Honorary Commanders gain access to the forefront of space innovation

The Honorary Commander Program at Vandenberg Air Force base is a paired partnership between local leaders and base leadership. The distinction of the Honorary Commander position comes with a two-year term filled with exposure to Vandenberg missions through a series of tours, volunteering engagements, shadowing programs, and heritage celebrations.

Headquarters Air Force ROTC has reduced the number of years enlisted cadre serve at detachments from four to three years.

A construction project designed to test the energy efficiency of barracks huts, or B-Huts, could ultimately result in saving lives.

A SpaceX Falcon 9 rocket carrying the Sentinel-6 Michael Freilich mission lifts off from Vandenberg Air Force Base on Nov. 21, 2020. In the foreground, spectators watch from a park in Vandenberg Village.