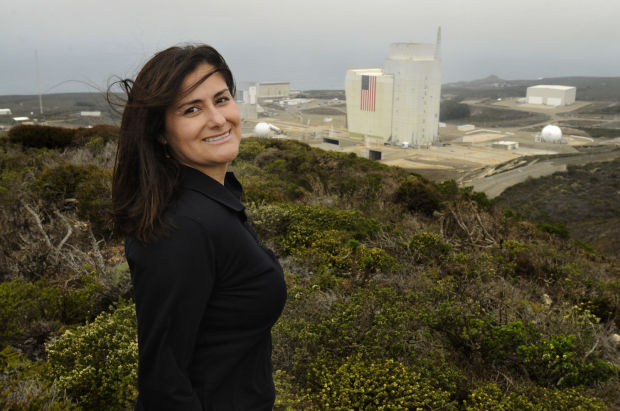 Margarita Marquez is an electrical engineer that helps launch rockets, including the upcoming Delta 4-Heavy that is schedule to liftoff from Vandenberg Air Force Base’s SLC-6, in the background. 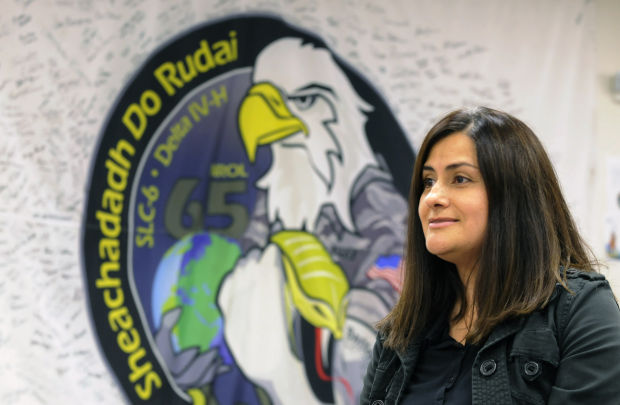 Margarita Marquez, shown with the NROL-65 mission flag signed by many workers, talks about launching rockets, including the upcoming Delta 4-Heavy. 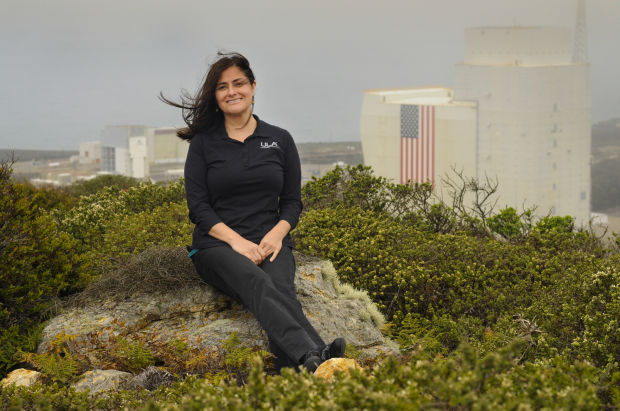 Margarita Marquez is an electrical engineer that helps launch rockets, including the upcoming Delta 4-Heavy that is schedule to lift off from Vandenberg Air Force Base's SLC-6, in the background.

Not eager to end up with a teaching career, Margarita Marquez wasn't sure how her love of math could add up to any other job — let alone one launching rockets.

But an inspirational teacher steered Marquez to an electrical engineering degree that eventually landed her a job with United Launch Alliance at Vandenberg Air Force Base.

Marquez, 38, of Lompoc is a systems test engineer and will sit with other critical team members on launch day for the Delta 4-Heavy rocket’s departure from Space Launch Complex-6. Liftoff is planned for 10:52 a.m. Wednesday.

This is her third mission as a primary console operator.

“I thought satellites were amazing, but when I saw rockets I thought, ‘It doesn’t get any better than this.’ Rockets are enormous. They’re huge. You can walk inside and you still have so much room.”

Her duties on launch day will involve monitoring telemetry for the first stage of the rocket.

“I basically am responsible for looking at everything that is in the avionics systems, any alarms, any issues, making sure everything’s working properly,” she said, adding her role continues throughout the countdown and just after liftoff.

She will be among crew members based at the Remote Launch Control Center several miles north of SLC-6, sitting in a front of computer — “that’s how we monitor our systems.”

“The day of launch is so stressful for me — it’s stressful and exciting at the same time,” she said. “It feels like this adrenaline rush. Your hands start sweating, your heart starts pumping. ... T minus four minutes — it’s eternal. It seems like it goes by too slow and you just want it to go.”

Marquez grew up in El Sereno, one of the oldest parts of Los Angeles, and graduated from Woodrow Wilson High School there.

Her immigrant parents had limited education — her mom dropped out of school to help raise siblings while growing up in Mexico, her father reads but writes slowly after leaving school at a young age.

Math was an early love for the young Marquez. In elementary school, Marquez recalled, she couldn’t wait to take the weekly math test each Friday when a 100-percent score would bring little prizes from the teacher.

“When I was a kid, I enjoyed math and sciences a lot,” she said, adding that in high school she was part of the Math Engineering Science Achievement, or MESA. The program for disadvantaged students helps them excel in math and science and earn math-based degrees.

“I still didn’t know what I wanted to do,” she said. “I thought maybe something related to math or computer science ...”

She ruled out teaching because she didn’t think she had the patience for the job. And the fact she didn’t even own a computer made her doubt the wisdom of pursuing computer science.

But an Introduction to Engineering course steered her in the new direction due to an inspirational instructor who was optimistic and had a patent for a pacemaker.

Because she needed to work while attending college, Marquez was a teacher’s assistant for three years at nearby schools. But as graduation drew near, she realized she had no engineering experience. She began hunting for internships and landed one with Boeing Satellite Systems in El Segundo.

The internship encouraged her to network with employees, which led to a four year job there. After she was laid off, a coworker suggested applying to ULA.

“His joke was it’s only three hours away from L.A., knowing that I was born and raised in LA. I didn’t want to leave LA. I was a city girl,” said Marquez.

She recalled telling her then-boyfriend and now husband, Yerko Dekovic — he works as a propellant engineer for ULA, they now have 14-month-old daughter Kiana — she had never driven farther north than Santa Barbara.

She applied, figuring it would be practice interview. An in-person interview took her to Lompoc, where the city girl initially wasn’t impressed. A job offer followed, and she figured she could tolerate being away from the city by spending weekends in Southern California.

She soon became a convert to benefits of small-town life.

First half of 2020-- Firefly Alpha with TBA payload

The collaborative—and sometime contentious—decision to launch the new U.S. Space Force will no doubt generate new questions and debates about …

Margarita Marquez is an electrical engineer that helps launch rockets, including the upcoming Delta 4-Heavy that is schedule to liftoff from Vandenberg Air Force Base’s SLC-6, in the background.

Margarita Marquez, shown with the NROL-65 mission flag signed by many workers, talks about launching rockets, including the upcoming Delta 4-Heavy.

Margarita Marquez is an electrical engineer that helps launch rockets, including the upcoming Delta 4-Heavy that is schedule to lift off from Vandenberg Air Force Base's SLC-6, in the background.