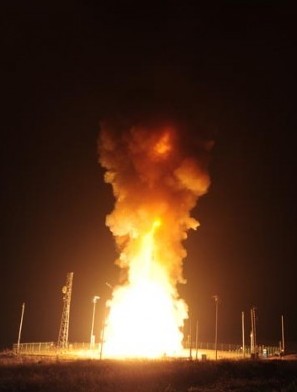 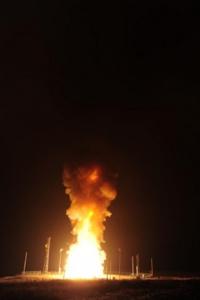 A Minuteman 3 missile blasts out of its silo on north Vandenberg Air Force Base early Saturday, resulting in a successful test of the unarmed weapon. The last test of a Minuteman seven months ago failed. //Joe Davila/USAF 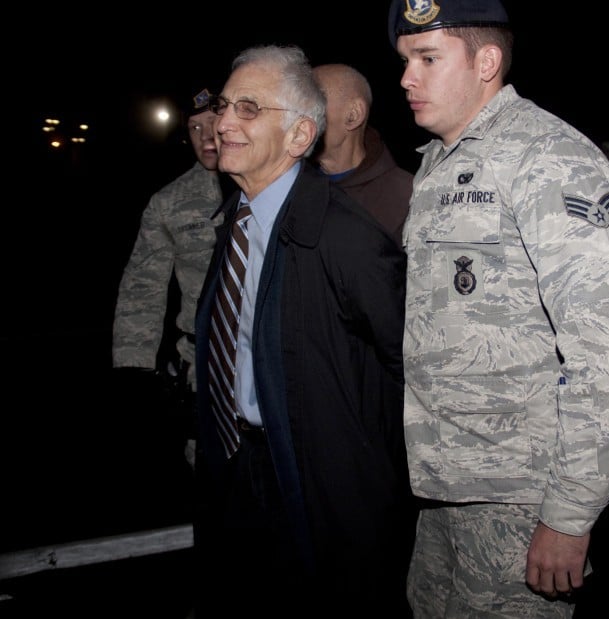 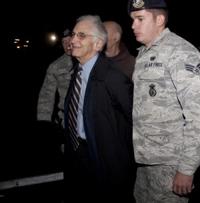 Protester Daniel Ellsberg is seen being led away by Air Force security forces in this February 2012 file photo after being arrested inside the Vandenberg Air Force Base main gate.

A Minuteman 3 missile blasts out of its silo on north Vandenberg Air Force Base early Saturday, resulting in a successful test of the unarmed weapon. The last test of a Minuteman seven months ago failed. //Joe Davila/USAF

Protester Daniel Ellsberg is seen being led away by Air Force security forces in this February 2012 file photo after being arrested inside the Vandenberg Air Force Base main gate.

Fifteen people protesting nuclear weapons were arrested for trespassing early Saturday at Vandenberg Air Force Base, where a Minuteman 3 missile that blasted out its silo became the West Coast’s first launch of 2012.

The unarmed intercontinental ballistic missile launched at 2:46 a.m. from an underground silo on North Base. Liftoff occurred about 45 minutes later than planned due to unfavorable weather at Vandenberg, Air Force officials said.

Despite the early hour of the launch, about 70 activists gathered in front of Vandenberg’s main gate to protest nuclear weapons and testing of intercontinental ballistic missiles.

Assembling just before midnight, protesters used songs, drums, speeches, banners and poems to demonstrate their objections to nuclear weapons and testing of ICBMs from Vandenberg.

Just before 1 a.m., more than a dozen protesters left the grassy area in front of the large Vandenberg sign and began walking in the street toward the main gate, where they were met by security personnel.

“It is the right of every American to gather in peaceful protest as well as to practice free speech, and we as military members work daily to ensure those rights are protected,” Col. Nina Armagno, 30th Space Wing commander, said in a written statement. “However, my number one responsibility is the safety and security of the personnel and property under my command.”

As activists waited to be handcuffed some of them sang “Stop the missile launching, we shall not be moved.” One woman sobbed uncontrollably as she was led away.

Those arrested included Daniel Ellsberg, former nuclear strategist for the government and the man responsible for leaking the Pentagon Papers to the press in 1971; Cindy Sheehan, who became an anti-war activist after her son was killed serving with the Army in Iraq; and Father Louis Vitale, who has been arrested multiple times in earlier protests at Vandenberg.

“Well, Dan, here we go again,” Vitale said as the group was arrested.

Ellsberg contends that the ICBM arsenal compels the United States to be on high-alert status and risks false alarms that could lead to devastating consequences.

“It’s outrageous and inexcusable that these weapons continue to exist,” Ellsberg told the crowd before being arrested.

He referred to something he had said during a 1983 protest at Vandenberg, when he also was arrested.

“What I said is, ‘This protest is a success even if the test goes off because it shows that you can’t any longer test first-strike weapons in this country without having to arrest Americans to do it,’” he said, bringing cheers and applause of support.

Sheehan, a Vacaville resident, stressed that every single life on the planet is valuable and must be kept safe from the effects of war.

Other speakers included Guadalupe resident Judy Talaugon, a Chumash descendant; and a man speaking on behalf of Micronesia.

Protesters included John Amidon from Albany, N.Y., a member of Veterans for Peace. He noted that nuclear weapons target every living being on the planet, including men and women, dogs and cats, and more.

Those arrested were issued citations for trespassing and later released in Vandenberg Village, base officials said.

The Air Force routinely conducts test launches of ICBMs from Vandenberg to gather data about the weapon system’s accuracy and reliability. And just as regularly, activists gather to lodge objections to nuclear weapons and the militarization of space.

Thick fog shrouded the Minuteman missile’s departure Saturday morning but several airmen shouted with glee as the rumble reached their viewing site at Vandenberg and the nighttime fog took on an eerie glow.

Once the unarmed weapon blasted off, the Air Force tracked its lone re-entry vehicle as it traveled some 4,200 miles to a target in the central Pacific Ocean.

“A successful test is one where the missile launches, completes its flight path within the narrow safety corridor, equipment functions properly, all sensor data is collected, and the simulated re-entry vehicle impacts where targeted,” said Megan Meyer, a spokeswoman for Global Strike Command, which oversees the Air Force’s nuclear weapons. “All test launches provide valuable data for use by the entire ICBM community.”

“These tests provide us the data necessary to ensure a reliable and effective ICBM force,” said Col. David W. Lair, 576th Flight Test Squadron commander. “These test launches and our test program bolster the credibility of our strategic deterrent capabilities.”

Saturday’s test comes seven months after the last Minuteman launch from VAFB ended in failure and led to an investigation.

Another Minuteman 3 test is scheduled to occur from Vandenberg this week, during a six-hour window set to open at 2:01 a.m. Thursday, Air Force officials have said.

In all, five Minuteman 3 tests are planned in 2012 from the base.

The first space launch of 2012 from Vandenberg is scheduled for March 29 when a Delta 4 rocket will carry a top-secret payload to orbit from Space Launch Complex-6.

And protesters plan to gather again at noon March 12 in front of the base for Occupy Vandenberg, an action to culminate the Pacific Life Community’s annual gathering.

Just before 1 a.m., approximately 14 protesters left the grassy area in front of the Vandenberg sign and began walking in the street toward th…