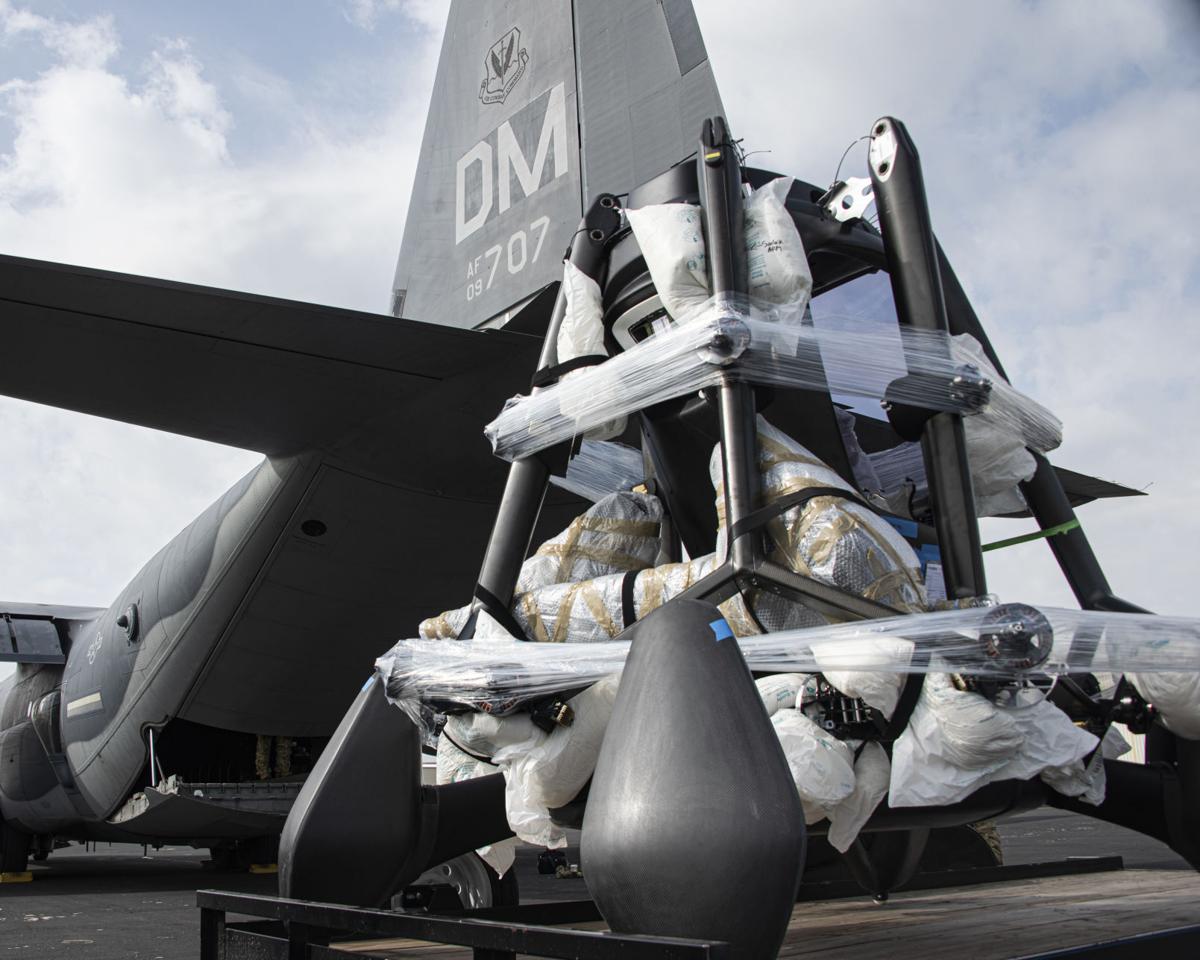 A LIFT Aircraft electronic vertical takeoff and landing aircraft sits on a trailer at Austin-Bergstrom International Airport, Texas, March 24, 2021. The eVTOL was transported from Ohio to Texas by the 79th Rescue Squadron as part of an ongoing relationship between industry partners and Air Force units that are working together to develop emerging technologies in support of tomorrow’s fight. 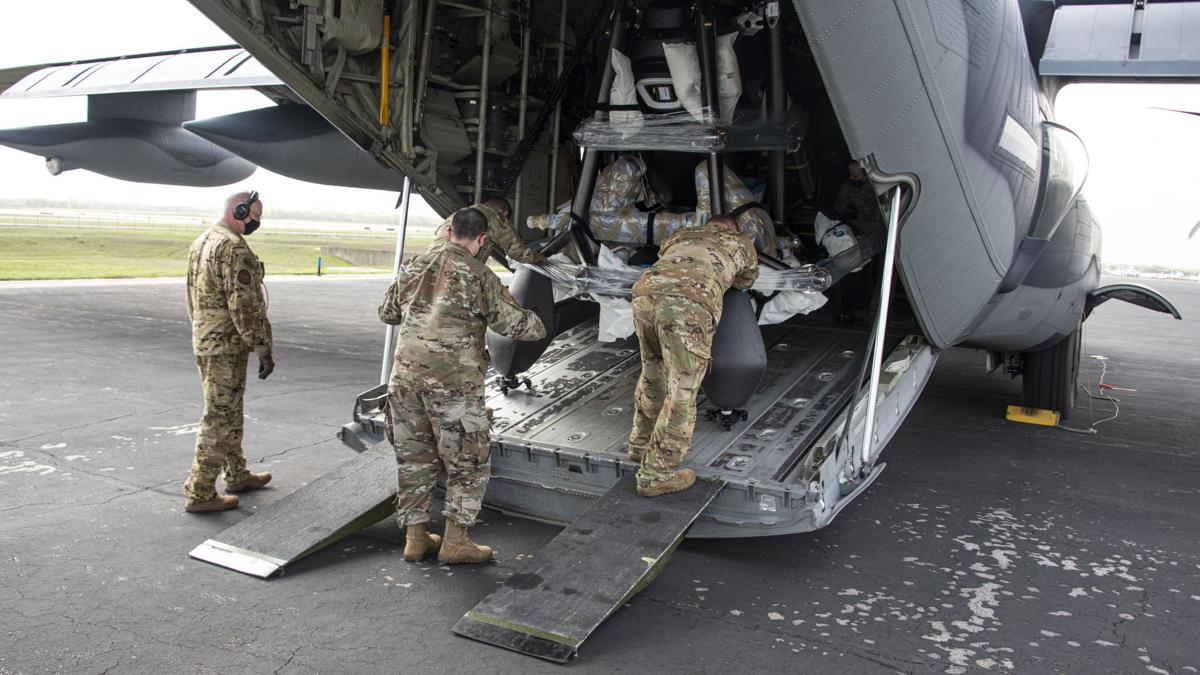 DAVIS-MONTHAN AIR FORCE BASE, Ariz. -- The needs of tomorrow’s Air Force must be met today, and the 355th Wing remains on the leading edge of this effort to ensure its continued ability to wield lethal, ready combat airpower anywhere, anytime.

Airmen from the 355th Wing, 621st Contingency Response Wing and AFWERX Agility Prime teamed up to move a LIFT Aircraft electronic vertical takeoff and landing aircraft using a military aircraft for the first time. The eVTOL vehicle was transported from Springfield, Ohio to Austin, Texas, March 23 – 24.

This effort was a proof of concept for the Air Force as the 355th Wing, the 621st CRW and other units across the force look to integrate the eVTOL technology into upcoming training. AFWERX and industry partners are working together to aggressively develop this to support the Department of Defense as it pursues further agile combat employment capabilities.

“We are working with industry and Air Force partners to continue developing this next-generation technology to eventually be able to do anything that a traditional aircraft can do,” said Maj. Brendan Gallagher, 563rd Rescue Group chief of weapons and tactics. “Due to the hard work and preparation of our loadmasters and the 571st Mobility Support Advisory Squadron, we were able to safely and effectively load the equipment onto the HC-130J.”

Loading this equipment onto the HC-130J Combat King II for the first time was no simple task, however. Air Force cargo specialists and flight engineers at LIFT Aircraft worked together to figure out configuration the eVTOL would need to be placed in for safe travel, proving that they can be transported using relatively small military aircraft with minimal equipment.

“With it being new, unfamiliar equipment, we had to come with a lot of variants and contingencies,” said Tech. Sgt. Joseph Wruck, 571st MSAS air transportation team sergeant. “Alongside the 79th Rescue Squadron, AFWERX and LIFT, we came up with a simple, safe and expedited way to load the aircraft with minimal specialized equipment by using the ramp system. The load took roughly 40 minutes, but we can get that down to 15 minutes in the future.”

The further integration and testing of this technology will ensure its employability in austere environments. In the future, operators expect this aircraft will be able to support a variety of missions, including personnel recovery and initial airfield assessment.

“The idea and execution of moving (the aircraft) in a more deployable state is a great validation of the design and how it was built,” said Jace McGowan, LIFT Aircraft flight development engineer and chief pilot. “We took the aircraft from just over 15 feet to just under eight. We are also working to get the time from unloading it off the aircraft to ready to fly down under two hours.”

As Airmen and industry partners look toward the future of innovation with this technology, AFWERX continues pushing it into new environments to test its capabilities.

“This load exercise came on the heels of major flight testing in Springfield, and we have more testing coming up in Austin and the Bushwhacker exercise (the 355th Wing’s agile combat employment exercise) in May,” said James Bieryla, AFWERX Prime division chief.

Bushwhacker is the 355th Wing’s ongoing series of agile combat employment exercises. The next iteration is scheduled this summer and will be the first time AFWERX eVTOL vehicles are integrated into dynamic military exercise scenarios.

“Our goal within Prime is to find emerging technology with dual capabilities and transition to deploy them rapidly after working with many mission partners to meet the needs of our operators and warfighters,” Bieryla said. “This movement with LIFT exemplifies how we aren’t content to sit around and wait on anything. We are getting after the chief of staff’s call to ‘Accelerate Change or Lose’.”

The eVTOL aircraft’s use in the upcoming Bushwhacker exercise is expected to demonstrate capabilities including personnel recovery and resupply. The 355th Wing also looks to test other more in-depth use cases in the future. This will improve dynamic forward adaptive basing concepts by pushing capabilities closer to the fight.

“This is the first milestone in developmental operations of eVTOL in rescue and attack, which highlights how the wing continues to actively engage on the front end of these efforts to continue building our readiness for tomorrow’s fight,” Gallagher said. “By doing this, we are furthering the rescue and attack capabilities as we look toward the future, because these are the next generation of flying platforms.”

“Innovation is critical and under AFWERX Agility Prime, we have a unique opportunity to leverage their capabilities and resources by working with technology developers and flight engineers earlier in the process to rapidly make changes and develop these technologies to meet mission requirements,” Gallagher said. “Instead of waiting to receive a product, we are getting engaged early to help shape it to meet our needs, which will pay large dividends once the product is mission ready.”

The eVTOL is in the beginning stages of its growth, but the potential of this technology cannot be overvalued. As it develops further, the effects of these aircraft will be seen around the globe.

“We are currently working with AFWERX to explore the next level of what is possible with this technology to meet the longer-term goals operators have,” McGowan said. “Getting this feedback from the operators is a great opportunity to shape things going forward. We are very happy to be able to work alongside the Air Force and meet the needs of the service.”

The ever-changing climate of conflict requires the Air Force and DoD to constantly adapt and innovate. The efforts of AFWERX Agility Prime, the 355th Wing and 621st Contingency Response Wing exemplify the Air Force’s commitment to increase capabilities and testing new equipment, ensuring the force remains ready for tomorrow’s fight.

The test launch of an unarmed intercontinental ballistic missile at Vandenberg Air Force Base was terminated Wednesday because of a fault detected by the system's computer during countdown, military officials said Thursday.

On March 23, what could have been a dire situation ended in the saving of two lives — thanks to the valor and heroism of two 88th Medical Group Airmen.

A C-5M Super Galaxy and C-17 Globemaster III loaded with oxygen cylinders and regulators, N95 masks and COVID-19 rapid diagnostic kits left Travis Air Force Base bound for India. The shipment is just the first. In all, the United States expects to deliver more than $100 million in medical supplies to the U.S. partner nation.

Perched on a scrub-oak-covered hilltop on the central coast of California is a small Air National Guard squadron that makes a big contribution to the Combined Force Space Component Command’s (CFSCC) mission to provide space capabilities to the joint warfighter and allied partners.

A LIFT Aircraft electronic vertical takeoff and landing aircraft sits on a trailer at Austin-Bergstrom International Airport, Texas, March 24, 2021. The eVTOL was transported from Ohio to Texas by the 79th Rescue Squadron as part of an ongoing relationship between industry partners and Air Force units that are working together to develop emerging technologies in support of tomorrow’s fight.