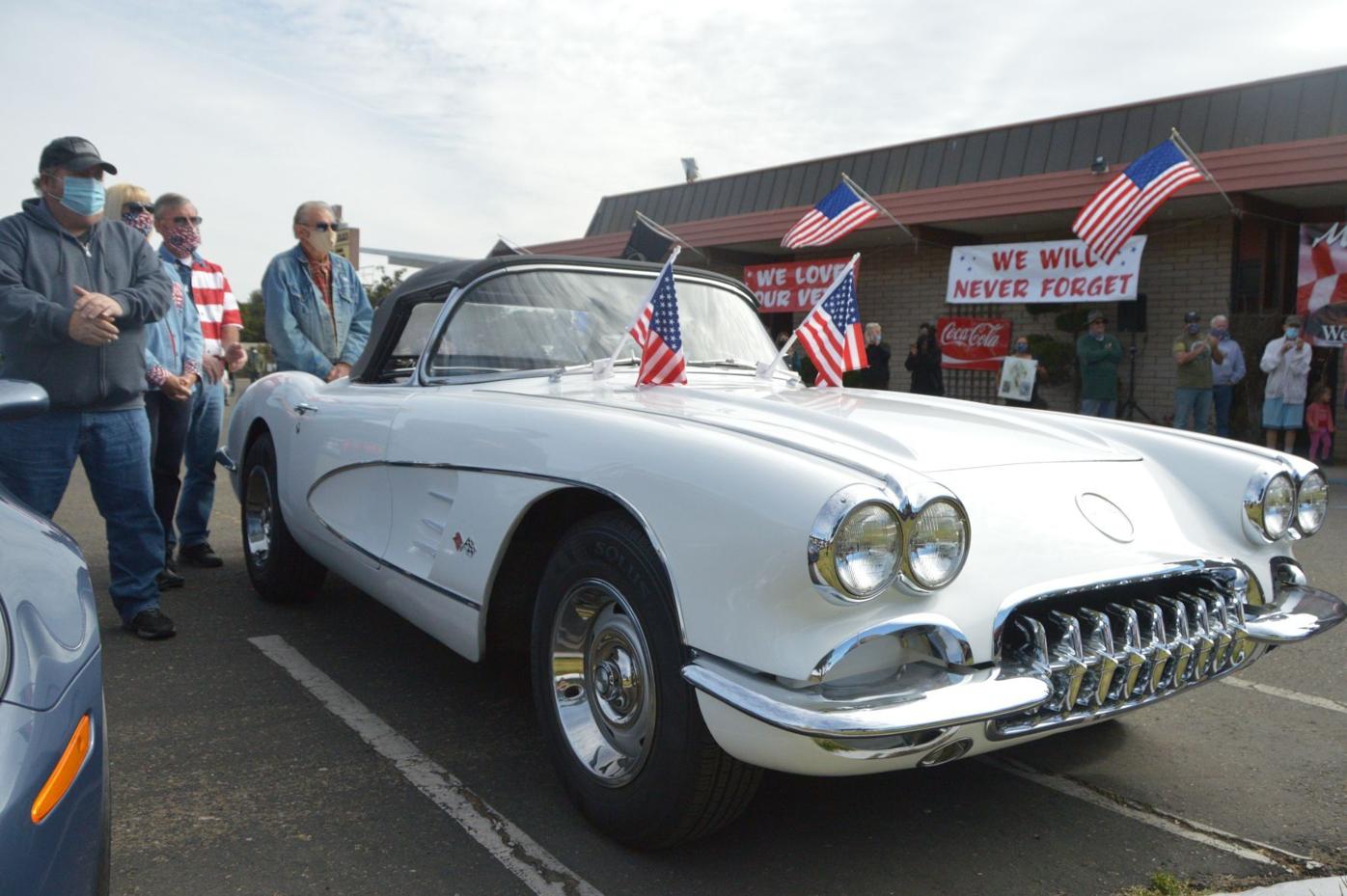 Vettes for Vets car club made an appearance at the Santa Maria Elks Lodge on Nov. 11, 2020, for Michael Clayton's annual Veterans Day barbecue. 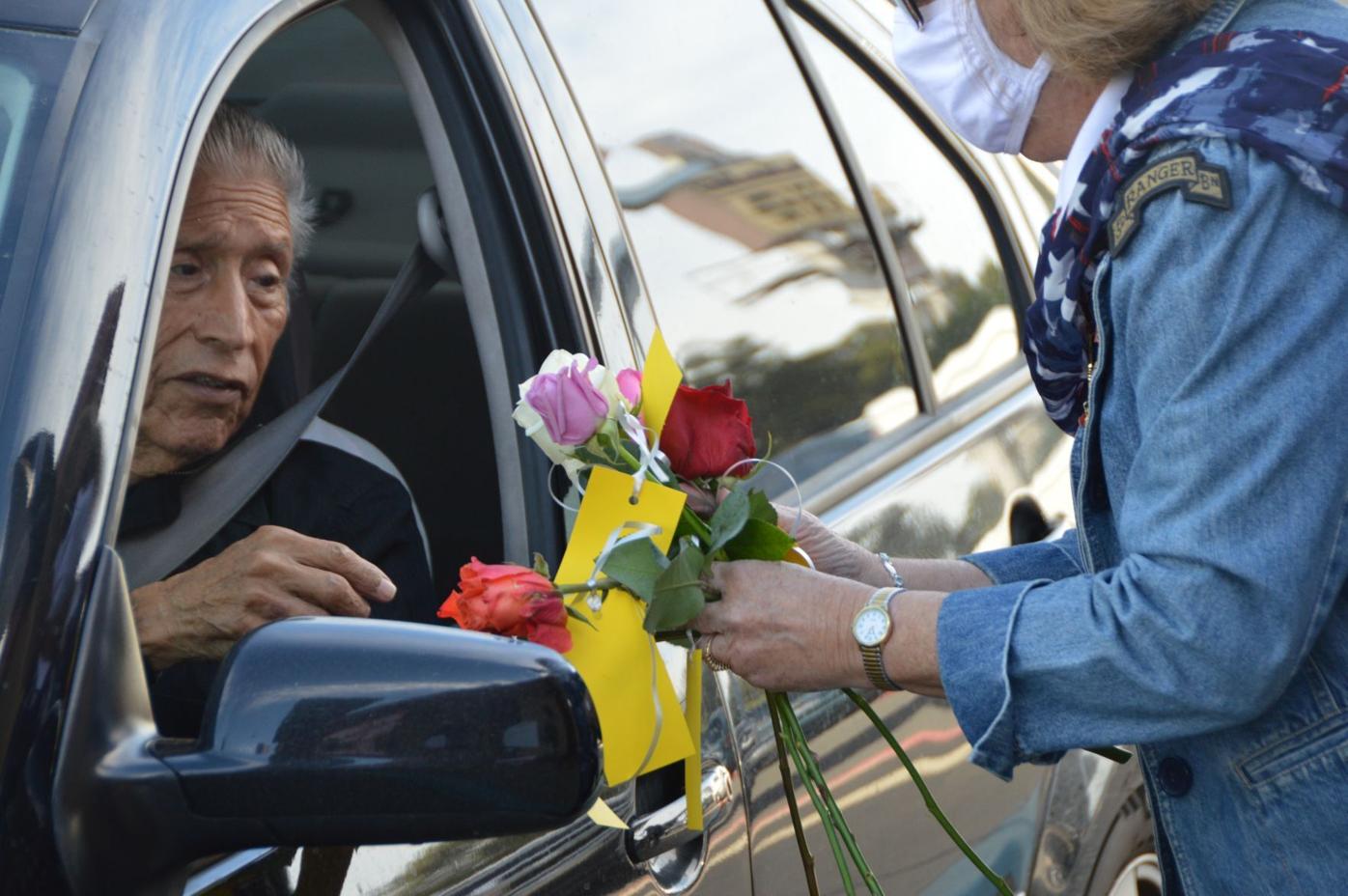 Members of a Santa Maria church handed out roses to motorists during a drive-through Veterans Day barbecue held at the Elks Lodge on Nov. 11, 2020.

Vettes for Vets car club made an appearance at the Santa Maria Elks Lodge on Nov. 11, 2020, for Michael Clayton's annual Veterans Day barbecue.

Members of a Santa Maria church handed out roses to motorists during a drive-through Veterans Day barbecue held at the Elks Lodge on Nov. 11, 2020.

Veterans Day is a federal legal holiday observed on Nov. 11 that honors the country's military veterans, including those who actively serve in the armed forces.

The holiday traces its roots to Armistice Day, which commemorates the end of World War I, and was formally changed to Veterans Day in 1954 via an act of Congress. Raymond Weeks is credited with organizing the first event using the term "Veterans Day" in Birmingham, Alabama, in 1947. The event was called a National Veterans Day celebration and included parades and other festivities, according to the Department of Veterans Affairs.

In Santa Maria and across the Central Coast, Veterans Day holds a special meaning among its citizens. Vandenberg Space Force Base is located nearby and many locals have taken it upon themselves to honor veterans in their own unique way, including attorney Michael Clayton.

This year, Clayton will be organizing his 21st annual Veterans Day barbecue at the Elks Lodge in Santa Maria, where he hopes to serve at least 2,000 tri-tip lunches. Organizers moved the event from the Veterans Memorial Building on West Tunnell Street after city officials advised Clayton to cancel the 2020 barbecue due to the COVID-19 pandemic.

Veterans of Foreign Wars Post 7139 on Thursday, Nov. 11 will host a Veterans Day program at 11 a.m. at the Solvang Veterans Memorial Hall, honoring those who have served in the military.

In addition to Clayton's barbecue, several more services honoring veterans are planned throughout the Central Coast.

The A Street Cafe in Santa Maria, located at 2445 A St., will be holding a color guard presentation of the American flag and also will be providing free meals to veterans.

A parade and air show will be held at the Santa Barbara Cemetery, located at 901 Channel Drive. The ceremony will include a UCSB color guard, performances by Gold Coast Pipe and Drum Band, David Gonzales and the Santa Barbara Choral Society, among others. The air show will be performed by The Condor Squadron and the ceremony will end with a flyover by a Navy Hawkeye Airborne Command and Control E-2 aircraft. The event is organized by the Veterans of Foreign Wars Post 1649 and the Pierre Claeyssens Veterans Foundation.

Clayton's annual Veterans Day barbecue will be held at the Santa Maria Elks Lodge 1538, located at 1309 N. Bradley Road. Like in 2020, this year's barbecue will be a drive-through event due to coronavirus safety protocols but will include a tri-tip lunch with all of the fixings, and appearances by Vettes for Vets organization and a color guard led by Santa Maria Police Lt. Jesus Valle. Clayton said he's dedicating the upcoming barbecue to the combat veterans of the Central Coast's motorcycle division.

Veterans of Foreign Wars Post 7139 will host a program at the Solvang Veterans Memorial Hall, located at 1745 Mission Drive. The event, which is open to the public, will include a flag-raising ceremony, songs by the Santa Ynez Valley Chorale and Santa Ynez Valley High School band, and guest speakers from Vandenberg Space Force Base and Post 7139. A luncheon in the American Legion wing will follow the program.

The YMCA in Santa Barbara, located at 36 Hitchcock Way, will host keynote speaker and Air Force veteran Joe Boris at an event with free coffee and donuts.

A luncheon will be held at the Santa Barbara Veterans Building, located at 112 W. Cabrillo Blvd.

The Lompoc Rotary Club will hold an event at 138 N. B St.

The inaugural Santa Ynez Salute to Veterans program will start with a patriotic parade through downtown Santa Ynez. The parade will kick off at the Maverick Saloon on Sagunto Street and travel to the Red Barn Restaurant and loop around the town before returning to its starting point.