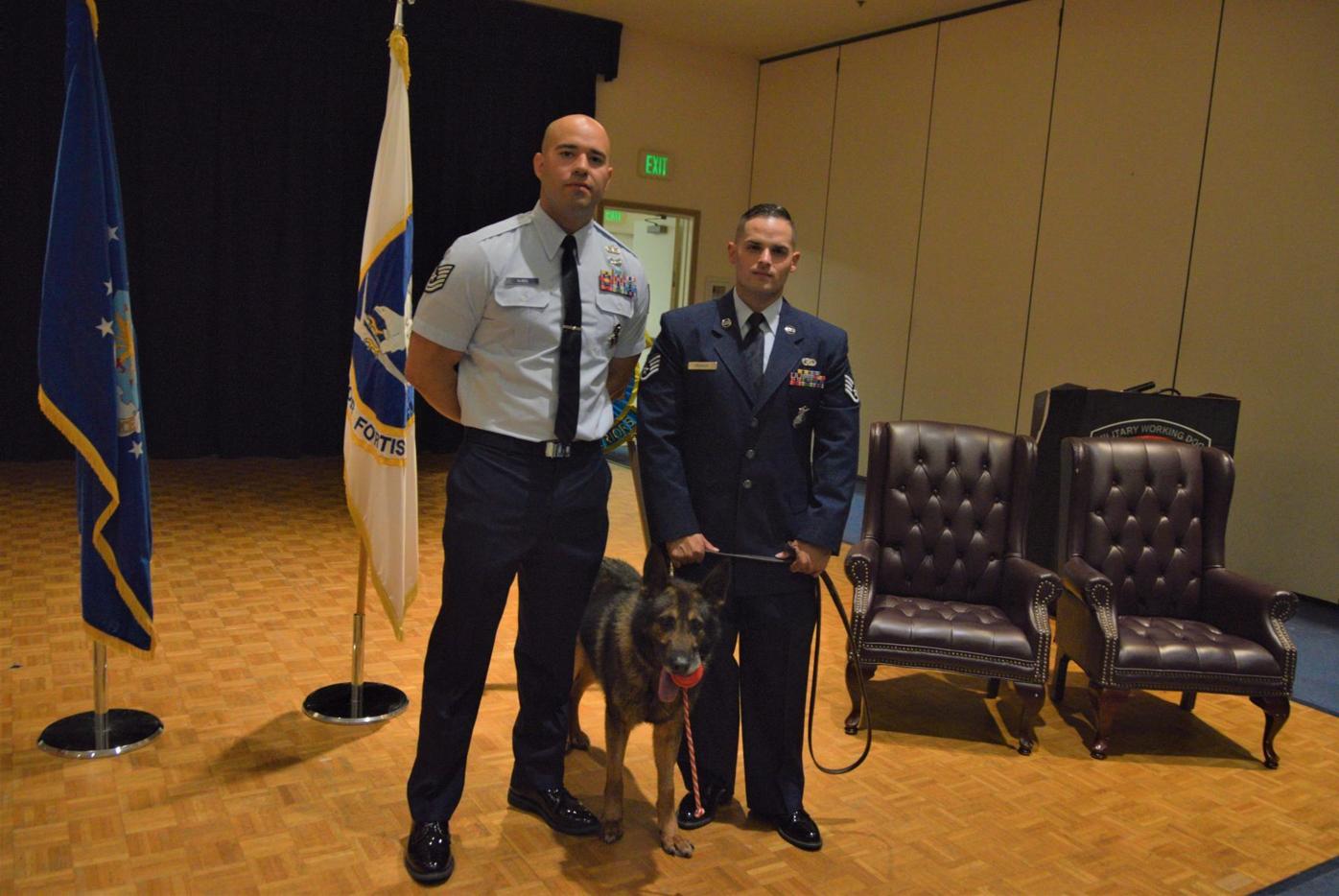 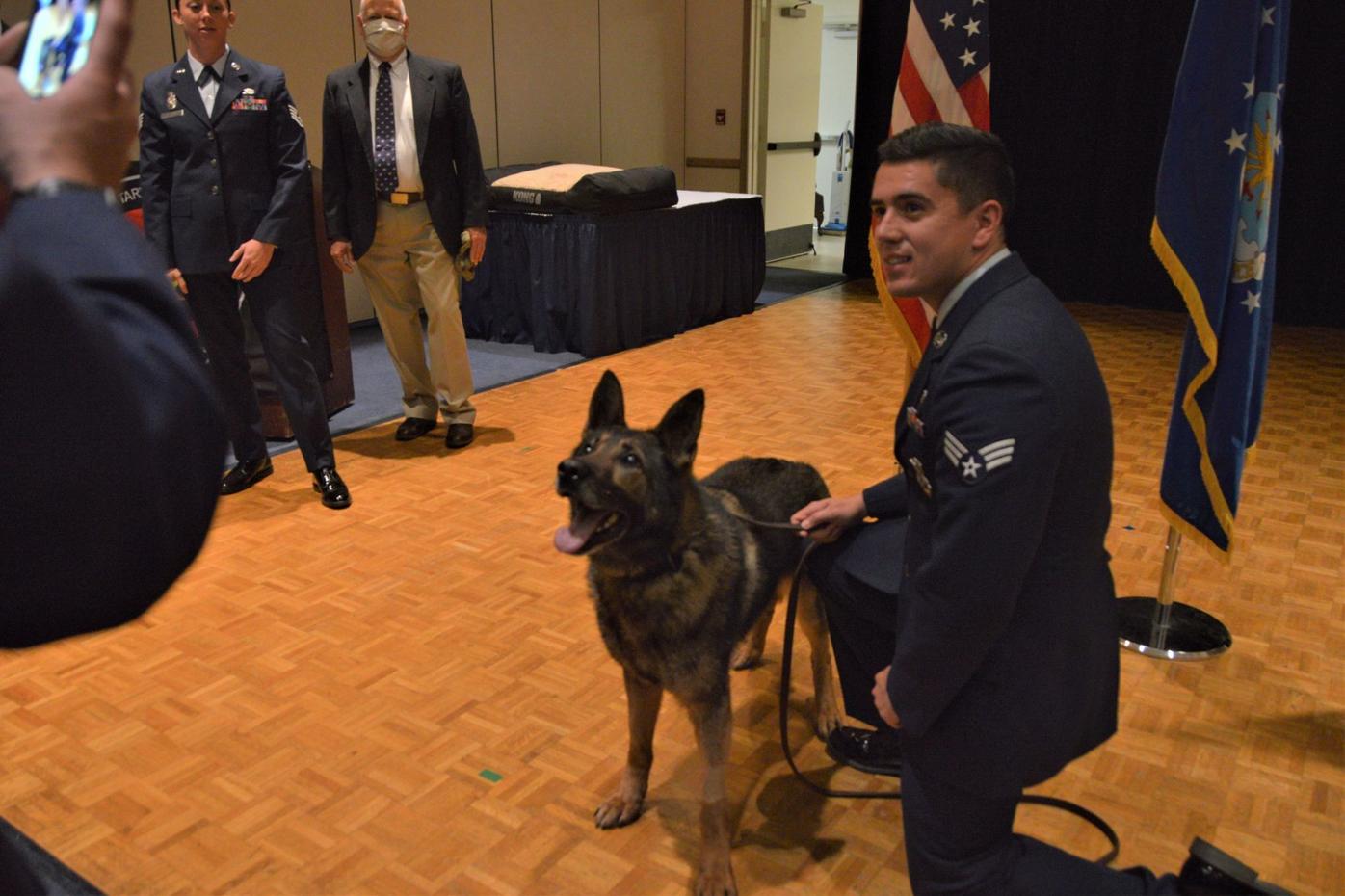 An Air Force senior airman poses for a picture with Jewel, a military working dog, during his retirement ceremony at Vandenberg Space Force Base on June 3. 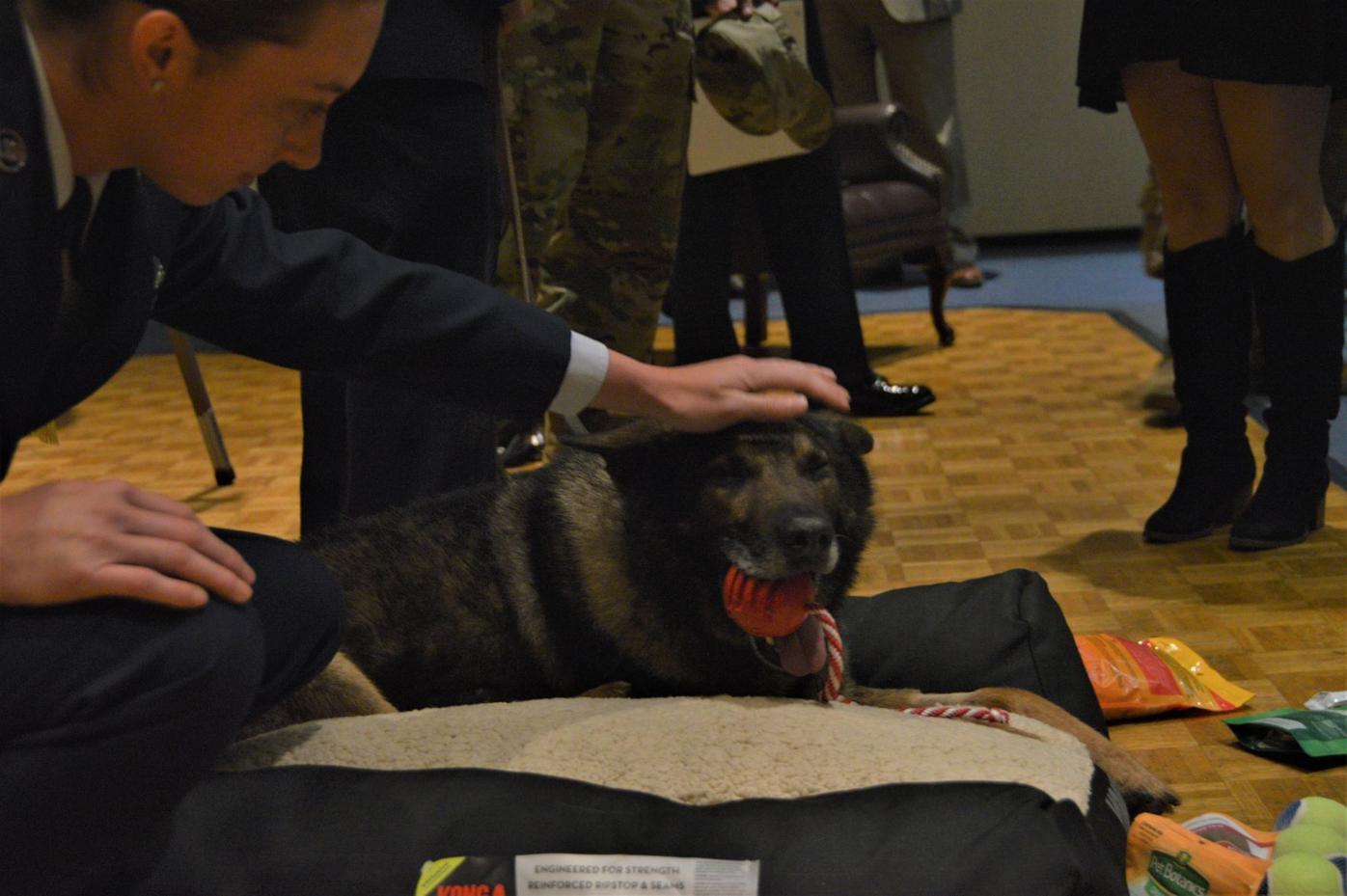 Jewel, a military working dog, received full honors at his retirement ceremony at Vandenberg Space Force Base on June 3. Jewel retired after six years and three months of service with the 30th Security Forces Squadron.

An Air Force senior airman poses for a picture with Jewel, a military working dog, during his retirement ceremony at Vandenberg Space Force Base on June 3.

Jewel, a military working dog, received full honors at his retirement ceremony at Vandenberg Space Force Base on June 3. Jewel retired after six years and three months of service with the 30th Security Forces Squadron.

Officials dressed in fatigues and pressed uniforms stood at attention inside a small room at the Pacific Club on Vandenberg Space Force Base on June 3 and awaited the guest of honor: an 8-year-old German shepherd named Jewel, who retired with full honors as a military working dog.

After a color guard and several speeches, followed by the ceremony's conclusion, Jewel wasted no time digging into a pile of treats and new toys waiting for him on top of a plush, new doggy bed at the front of the room. What a good boy.

“I do have to say, this ceremony is slightly different than the normal retirement ceremony because this is the only one where you could pet the retiree,” O’Neal said, before asking out loud why such a ceremony is held for a dog. “I will tell you that you are witnessing something that has only recently been allowed. It was not until the early 2000s that military working dogs were afforded these honors.”

Dogs have been used in battle for nearly as long as humans have fought wars. They have been a critical part of combat operations for centuries and were used in a variety of roles, including as couriers, sentries, scouts, securing base perimeters and raising alarms when sensing enemy troops, according to O’Neal.

In addition, dogs are known for their powerful olfactory senses, sniffing out drugs, bombs and humans with incredible accuracy. They were also a source of comfort and morale for troops.

But sadly, working dogs were considered “excess military equipment” and were often abandoned on the battlefield or euthanized when the fighting stopped, according to O’Neal.

That was until 2000, when President Bill Clinton signed Robby’s Law, which allowed military working dogs to be adopted by their handlers.

“Military working dogs, just like their human counterparts, have given their lives in service to their nation,” O’Neal said. “They do it simply for the love of their handler and for a few precious moments with their favorite toy.”

Born on Feb. 27, 2013, Jewel began his career on June 23, 2014, with the 341st Training Squadron at Lackland Air Force Base in San Antonio, where military working dogs are trained.

During that time, Jewel has worked under seven handlers as a narcotics detector dog, responding to numerous calls along the way.

Some of his most notable incidents include securing Vandenberg SFB for the arrival of former Vice President Mike Pence in July 2019 and locating a suspect involved in a fatal hit-and-run vehicle collision that killed a Santa Maria man on Santa Lucia Canyon Road June 16, 2020.

Now that Jewel is retiring, he will be adopted by a handler who has bonded with him the most, according to Air Force Tech. Sgt. Paul Olmos, of Hanford, who has worked as a kennel master at Vandenberg SFB since 2019.

"He will let you know that he wants to get out of the kennel and likes to work," Olmos said, adding that Jewel prefers to stay clean. "Like he's wearing a pair of Air Jordans and doesn't want to get them dirty."

A new commander of Space Launch Delta 30 will be welcomed Friday during a change-of-command ceremony at Vandenberg Space Force Base.