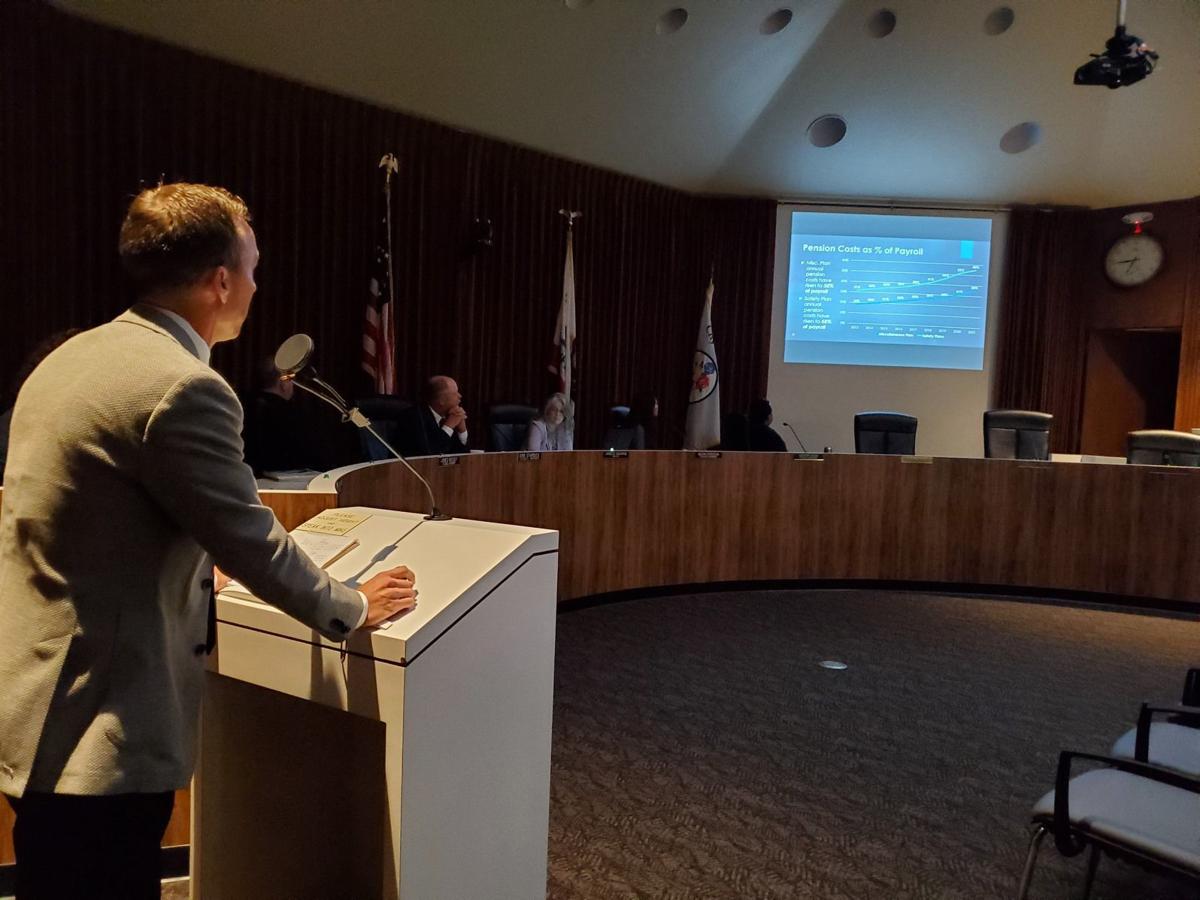 Mike Meyer, a vice principal with NHA Advisors, presents information related to CalPERs to the Lompoc City Council during a special meeting Thursday night at Lompoc City Hall. During the meeting, the council discussed whether to put a sales-tax increase before voters. 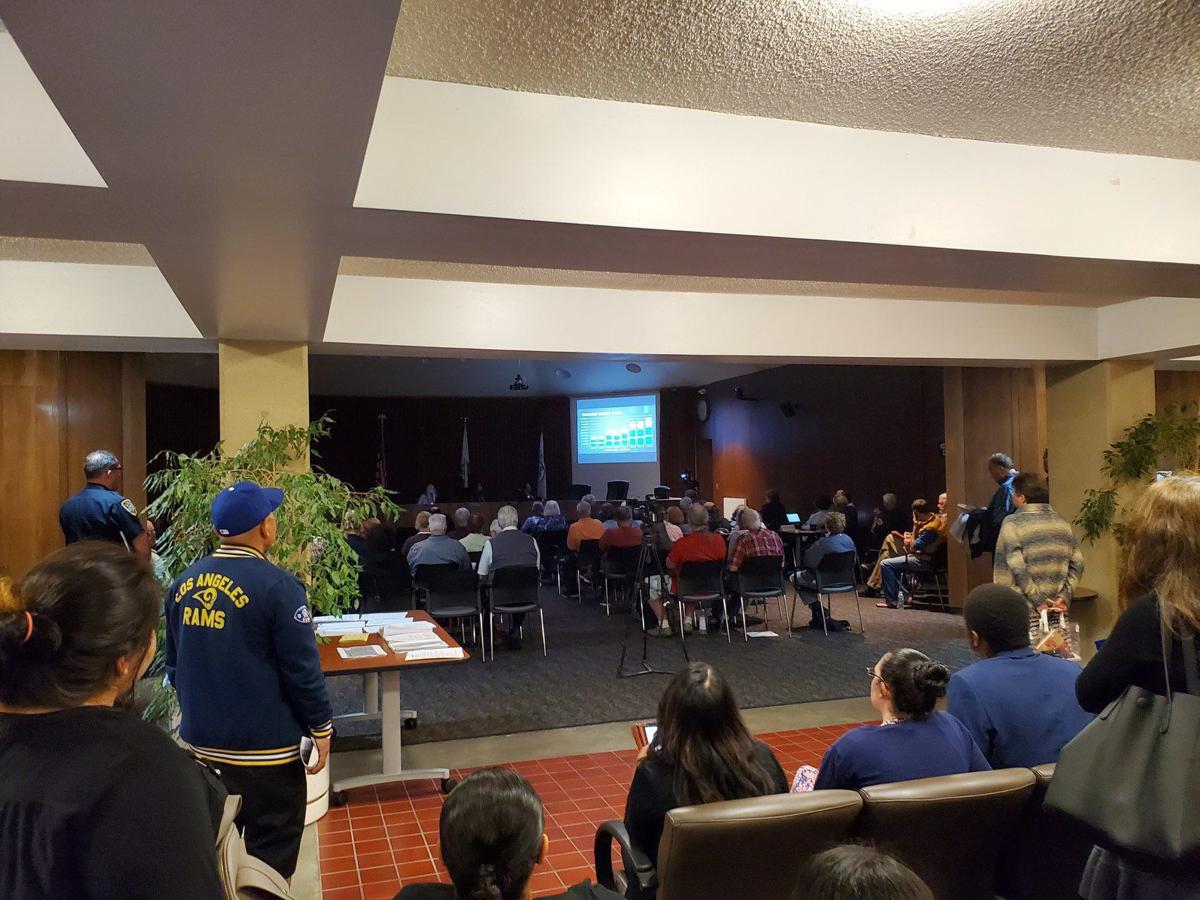 Community members fill Lompoc City Hall on Thursday night for a special meeting of the Lompoc City Council, which discussed whether to put a sales-tax increase before voters.

After nearly six months of public discussion and debate, the Lompoc City Council voted Thursday night to give Lompoc residents an opportunity to decide — via the ballot box — if they would like to raise the local sales tax in an effort to boost the city's flagging revenue.

The council wrapped up Thursday’s special meeting, which lasted more than two hours, by voting 5-0 to put a general sales tax increase of 1% on the March 2020 ballot. The move had been recommended in past budget cycles but became a primary topic of discussion for much of this year as the council and city staff looked to offset budget shortfalls and address the city’s significant obligation to CalPERS, the state’s public employee retirement system.

Thursday’s vote, which was followed by a round of applause from the dozens of community members who remained for the duration of the meeting, marked a change of direction for Councilmen Jim Mosby, Victor Vega and Dirk Starbuck, each of whom had previously expressed hesitation to the idea of using a tax increase to try to lift city revenue.

Prior to Thursday's vote, Mayor Jenelle Osborne expressed gratitude to the councilmen for continuing the discussion.

“Thank you all for changing your minds,” she said. “I believe you finally listened to the community. And while it’s not necessarily addressing the first need of public safety, it is absolutely addressing our outstanding debt and I think we can move forward in the future.”

The successful motion, which was made by Vega, directed city staff to prepare a ballot measure for a 1% general sales tax increase to be voted on during the state’s primary election on March 3, 2020. By choosing to place a general tax on the ballot, instead of a special tax, the measure will need support from a simple majority of the electorate, rather than the two-thirds support a special tax would need.

A general tax will also give the city leeway in how the money is spent, while a special tax would have required that the funds be allocated for a particular purpose.

To proceed with the ballot measure, the council will next need to approve a “fiscal emergency” ordinance at a future meeting. The exact ballot language is also slated to be reviewed at a later date. The ballot measure would need to be submitted to the Santa Barbara County Clerk-Recorder by Oct. 24.

If the tax increase succeeds on the ballot, it would last for 15 years, according to a sunset clause included as part of Vega's motion.

Twenty members of the public addressed the council during a 45-minute public comment session, with almost all of the speakers expressing support for putting a general sales tax increase to voters.

According to figures provided by city staff, a sales tax increase from the current rate of 7.75% to 8.75% would generate an estimated $4.9 million in additional revenue annually. The cost to put the measure on the ballot is estimated to be $20,000 to $25,000.

If the measure passes, the new tax would go into effect in July 2020 and the city would begin seeing the projected additional revenue in October 2020, according to City Manager Jim Throop.

How that additional money is utilized was a significant topic of discussion during Thursday’s meeting. Several residents expressed a desire to provide more funding to the city’s public safety departments, a sentiment that was shared by members of the council.

Key to those discussions, however, was the city’s $93 million obligation to CalPERS, about $43 million of which is slated to come from the general fund.

Mike Meyer, a vice principal with NHA Advisors, opened the meeting by sharing figures and financing options on how the city can pay down that debt. He noted that the CalPERS impact this fiscal year is expected to be about $9 million, which is up from the $5 million impact in 2013 but significantly less than the $14.5 million impact anticipated at its peak in 2031.

Some city employees, including leaders of the Lompoc police and fire unions, were among those who expressed support for the sales tax increase. They noted that while it will not go directly to public safety departments, it could free up money within the city’s coffers that could in turn benefit the entire city, including public safety.

While some speakers were critical of Mosby, Vega and Starbuck for their past resistance to the move, Mosby and Vega defended their prior actions.

Mosby said he felt that the recent budget cutbacks, many of which he helped spearhead, will serve the city well in the event that the tax measure fails to pass, and Vega said he felt like more information — such as the figures provided Thursday — was needed before moving forward with a potential tax increase.

“The CalPERS thing is changing monthly and daily and it’s just an extreme debt that everyone’s having a hard time keeping a handle on,” Vega said. “Nobody was ever against, that I know of, putting a tax on the ballot. … We were just trying to vet everything.”

City of Lompoc to explore formation of nonprofit, remove anonymity for some complainants

The Lompoc City Council agreed Tuesday to have staff explore the formation of a nonprofit organization to help fund city projects, and the governing body also approved a change to the city’s code-enforcement complaint process that will strip away anonymity for certain complainants.

As the city of Lompoc continues to deal with budget cutbacks, the Lompoc Chamber of Commerce is inviting community members to take part in a luncheon titled, “Let’s Talk Sales Tax.” The event is scheduled to begin at 11:30 a.m. Thursday, July 18, at the Hilton Garden Inn, 1201 North H St.

The Lompoc City Council voted 4-1 during Monday’s special session to adopt a 2019-21 biennial budget that is heavy on cuts, including the elimination of several positions. The adopted budget does not include any projections from a potential sales tax increase, but the governing body discussed parameters for a ballot measure to increase the city’s sales tax and made plans to further review those options at a future meeting.

The Lompoc Valley Chamber of Commerce announced Monday that it had launched an online survey regarding the addition of a 1-percent sales tax increase, and local residents are invited to weigh in on the matter. The announcement came just six days after the Lompoc City Council decided via a split 3-2 vote to move forward with a budget that does not take into account any new potential revenue from a sales tax increase, a move that had been recommended by city staff as a way to generate revenue and balance the city’s budget.

For the second time in as many years, the Lompoc City Council on Tuesday night voted against introducing a potential new tax measure as a way …

Lompoc Mayor Jenelle Osborne delivered a sobering State of the City presentation Thursday afternoon that emphasized several of the challenges — particularly those related to projected budget shortfalls — that the city is already dealing with or will be navigating in the near future. Before concluding, however, she assured her audience of mostly business and civic leaders that the tone wasn’t meant to be somber.

The Lompoc City Council voted 5-0 to declare a fiscal emergency, a move required by the state in order to put a measure on a special ballot, and also unanimously approved ballot language and allocated $25,000 to pay for a 1% sales tax increase to go on the March 3, 2020, state primary ballot.

Measure I2020, which has been at the center of public discussion for nearly a year, will ask voters to decide whether the city of Lompoc should raise its sales tax as a way to boost revenue. While some residents have expressed apprehension about the idea, city officials liken the measure to a much-needed life preserver.

Mike Meyer, a vice principal with NHA Advisors, presents information related to CalPERs to the Lompoc City Council during a special meeting Thursday night at Lompoc City Hall. During the meeting, the council discussed whether to put a sales-tax increase before voters.

Community members fill Lompoc City Hall on Thursday night for a special meeting of the Lompoc City Council, which discussed whether to put a sales-tax increase before voters.