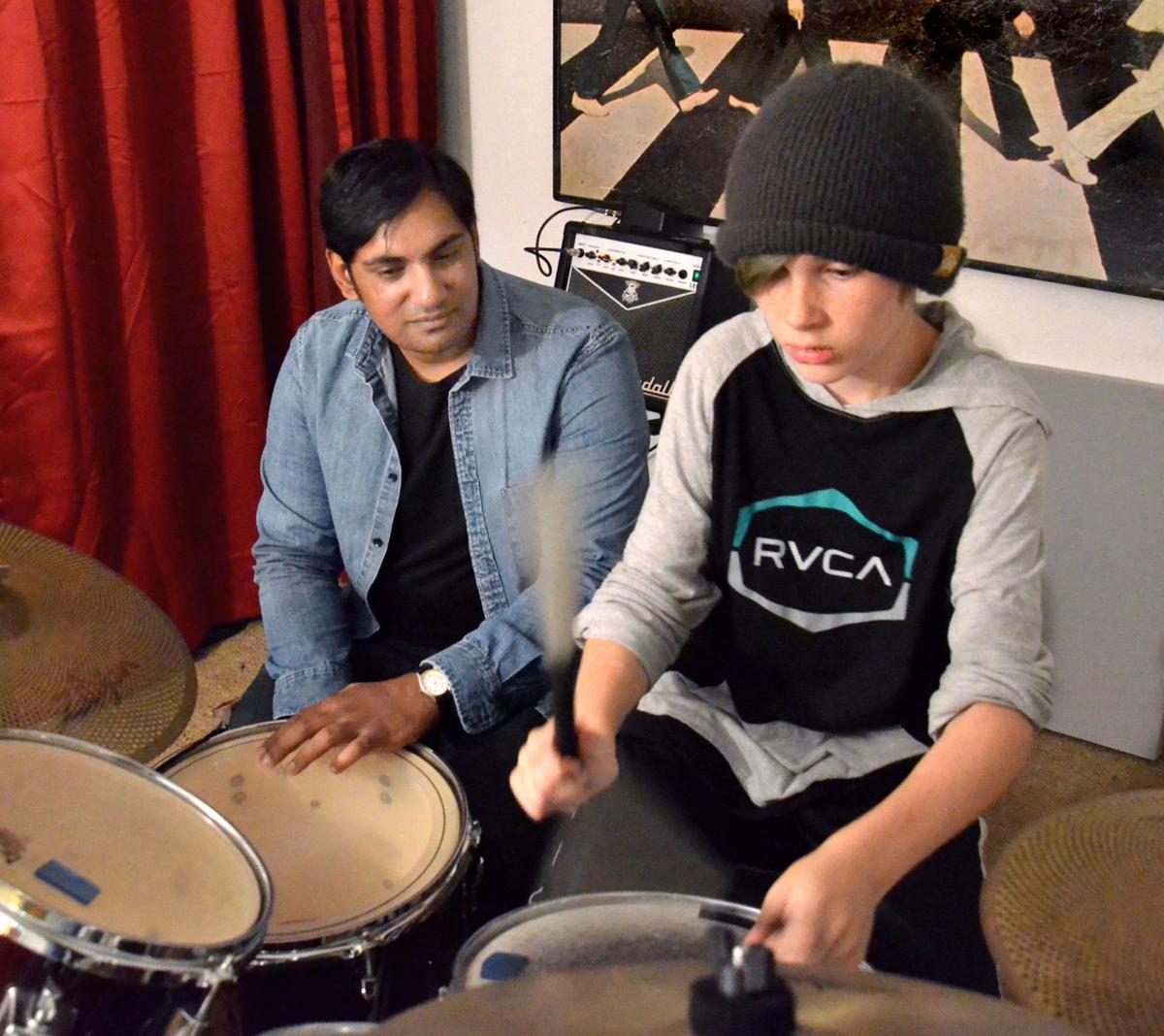 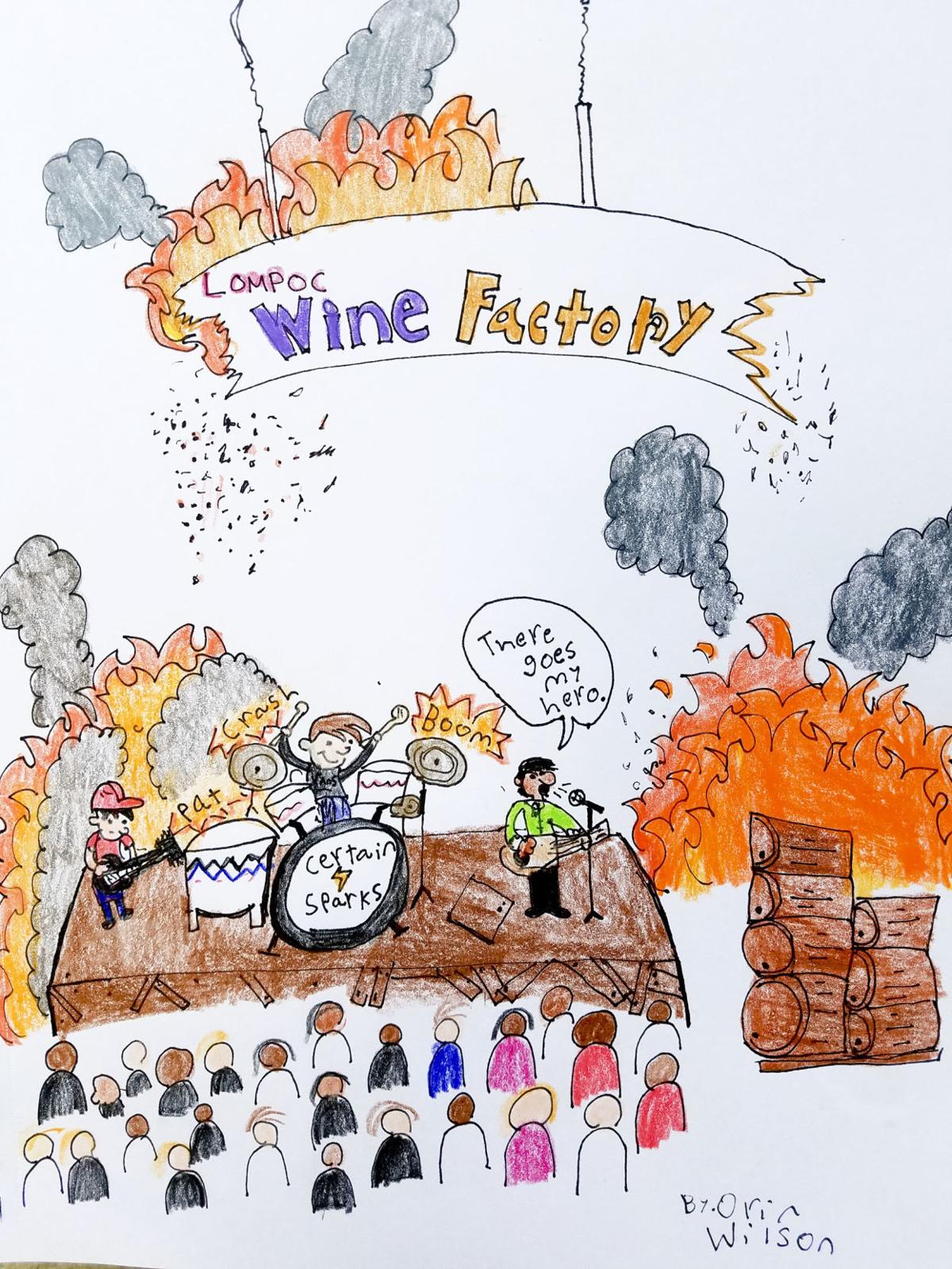 Orin Wilson drew this cartoon to illustrate the cancellation of his music recital over Lompoc regulations. 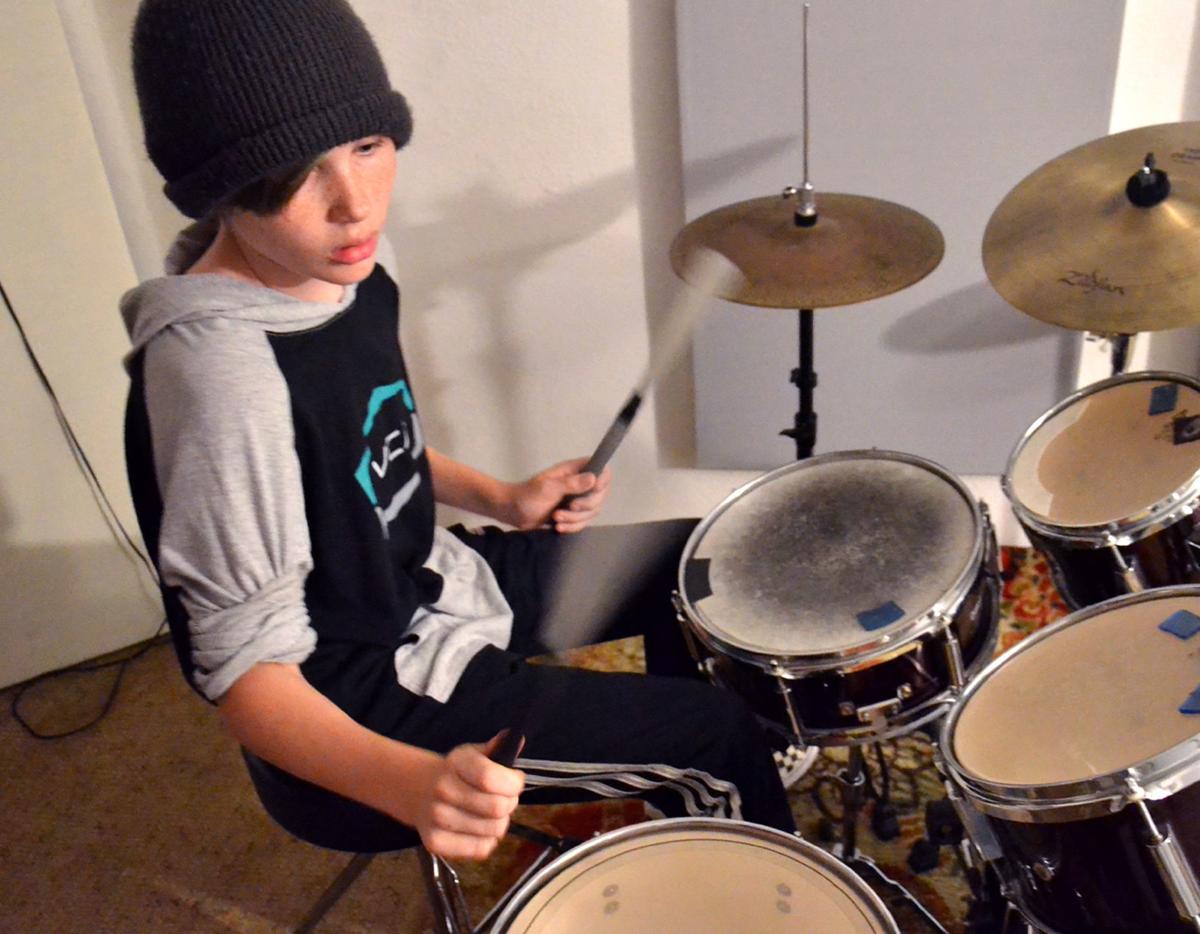 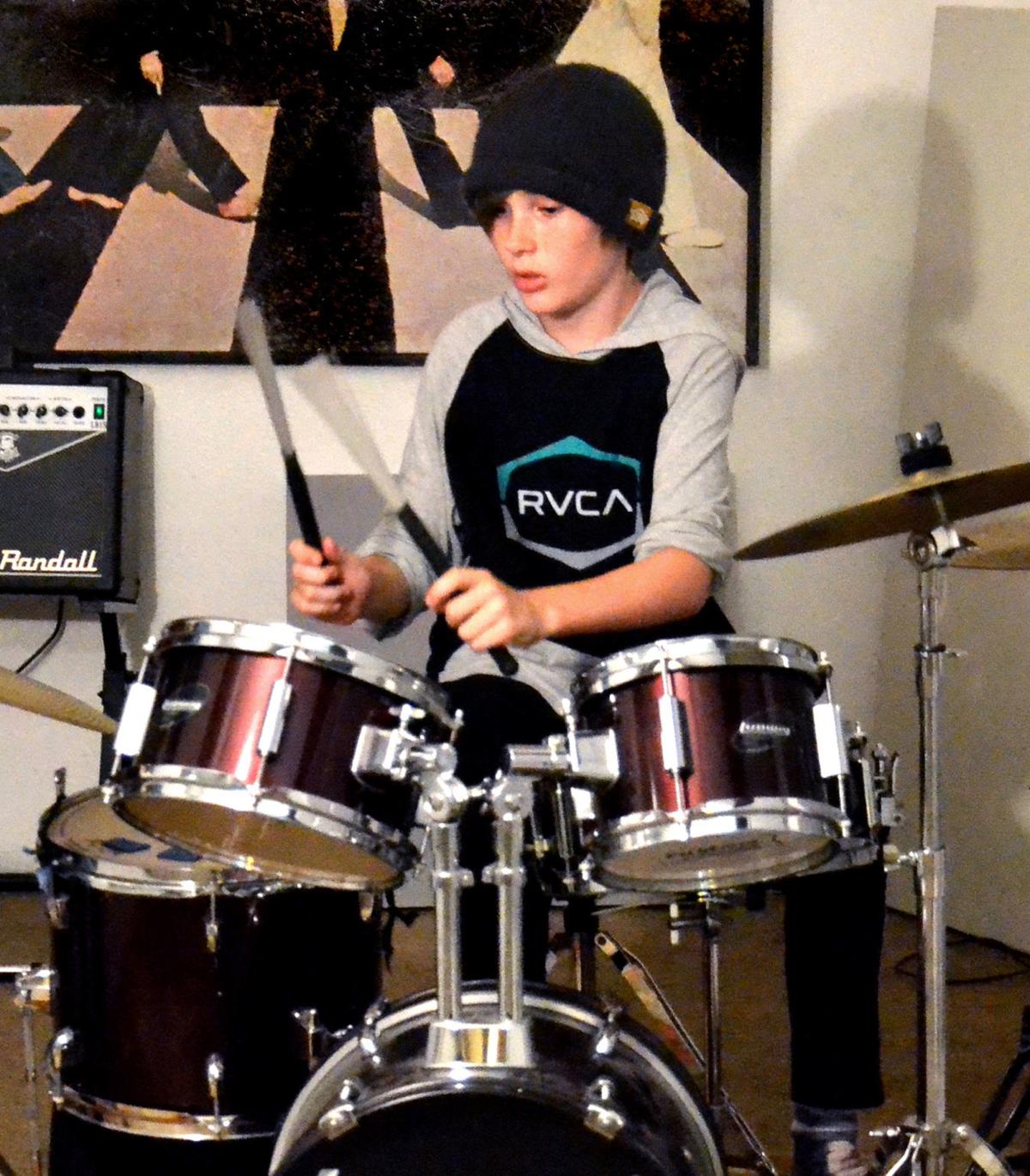 Orin Wilson,11, practices drumming during a lesson at Certain Sparks Music in Lompoc. 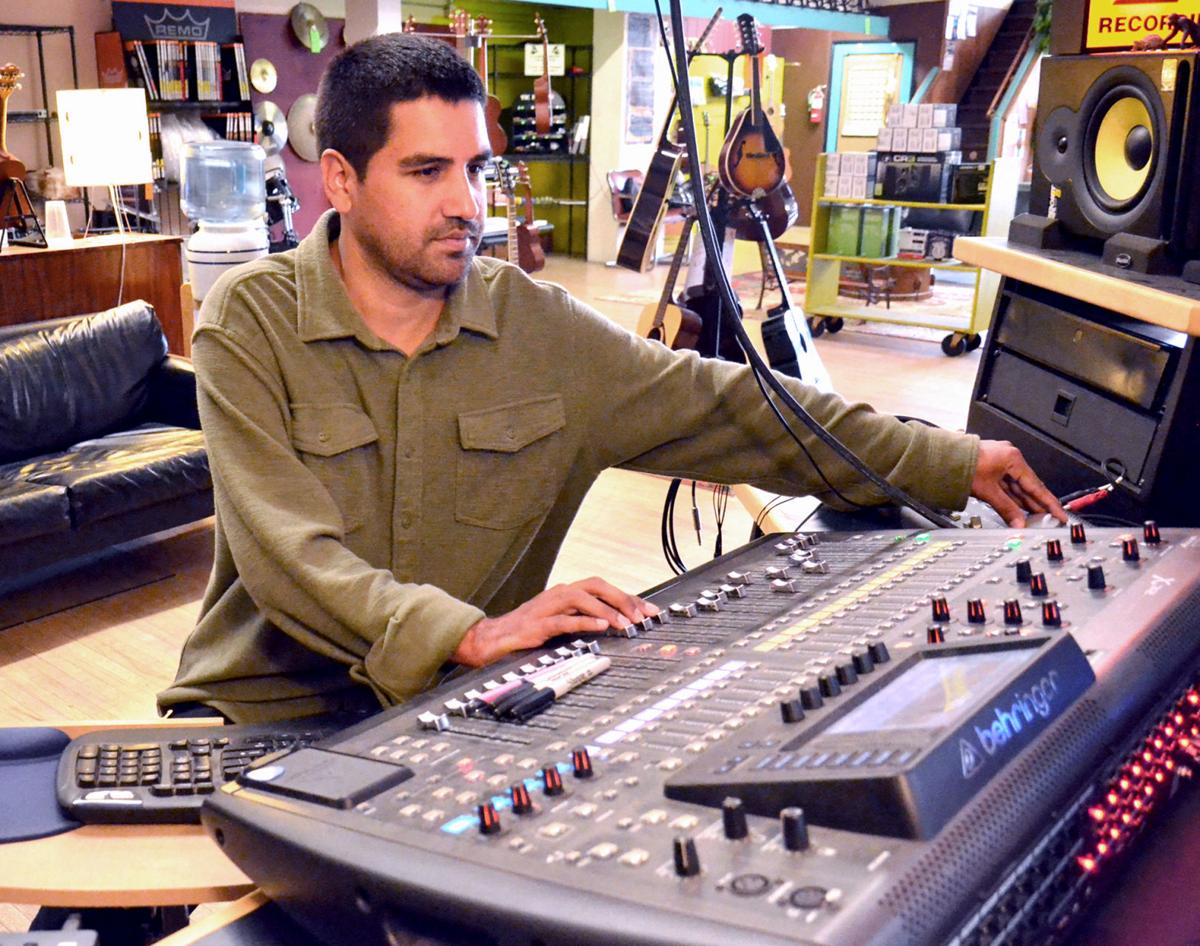 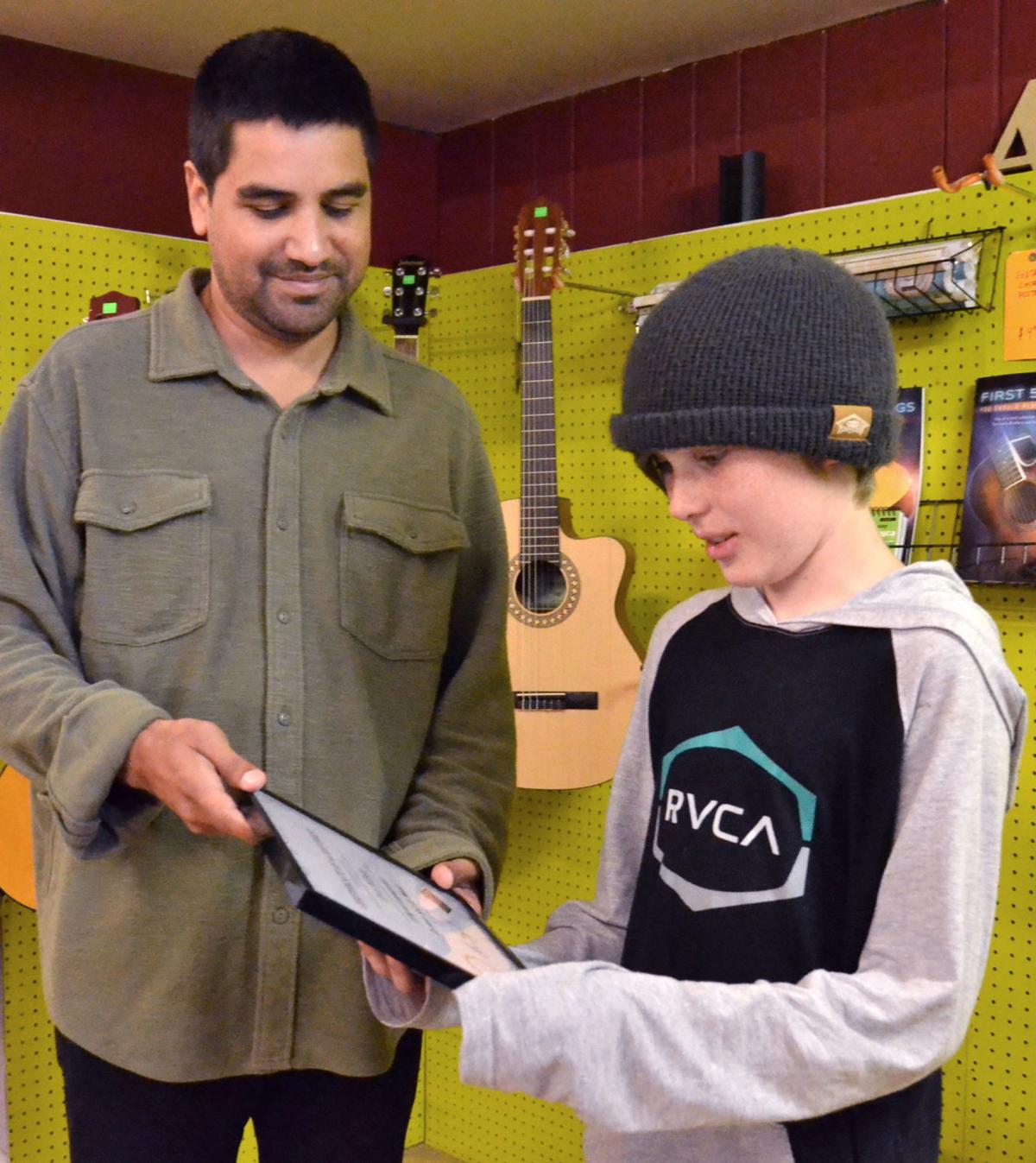 When Emily Wilson’s son, Orin, began playing the drums, the Lompoc mother said she could tell that something had clicked.

Orin, now 11, was diagnosed three years ago with autism spectrum disorder. He and his family soon found that his drumming was able to reach him in ways that therapists and other activities couldn’t.

“Music’s been great for him,” Emily Wilson said Friday. “The way that his music teacher relates to him is just unparalleled. I’m a teacher myself and I know it’s not easy connecting with kids all the time, and especially a kid like my own child.”

Both Orin and his mother were greatly looking forward to Orin performing the Foo Fighters' "Hero" in a recital this month — so much so that the duo postponed their move to New Mexico until after the anticipated showcase.

Then they learned the recital itself had been postponed, indefinitely.

The Wilsons are among several local families and musicians who have found themselves as collateral damage in what has become a conflict between the city of Lompoc and a pair of private businesses over those businesses' right to put on music recitals.

“We just hoped that the recital itself would be a good issue where the city would say, ‘You know, there’s really no loss with this, there’s only advantages, so go ahead and proceed and we’ll figure out a better long-term solution,’” said Randall Sena, the owner of Certain Sparks Music, which is at the center of the dispute. “That didn’t happen.”

The issue primarily centers on Certain Sparks Music holding its twice-per-year recitals for child and adult musicians at the Lompoc Wine Factory, a 1950s-era building that offers commercial space for local winemakers.

Bridge said he was ultimately told by city officials late last year that he would need to obtain a temporary use permit before hosting any similar events in the future.

Bridge said he first needed to make minor amendments to his business tax certificate and a minor use permit before he could begin the temporary use permit process. He said he filed both those changes in December and didn’t hear back from the city for three months.

In March, he said, he decided to go ahead and file for the temporary use permit anyway, particularly with the two-day Certain Sparks Music recital scheduled to begin on June 21.

That permit is still pending approval, a status that has angered many in the local music community.

Several speakers, including Emily and Orin Wilson, addressed the Lompoc City Council on June 18 to try to compel the governing body to help expedite the approval.

The issue had generated such a response even before the meeting that the city drafted a letter to explain to community members why the process was taking longer than usual.

“Please know that the city has been diligently working with the owners of the Wine Factory on the required improvements needed for their building to hold public events,” read a portion of the letter.

The letter went on to note that there are “a number of health and safety-related issues that need to be rectified before a (temporary use permit) can be approved,” and that the Lompoc Wine Factory “building is quite old, and was never designed or intended for its new/current uses.”

Bridge, who this month was appointed to the Lompoc Planning Commission by Councilman Jim Mosby, said he would like to clear up any issues but that he's still trying to determine the nature of those issues.

“We’ll be happy to do it; whatever they say,” Bridge said. “It’s just been kind of a hard time getting them to say.”

The concerns for Sena and others who spoke at the June 18 City Council meeting seem to go beyond this specific case.

Sena pointed out that similar venues around the Central Coast, including others in Santa Barbara County, host similar events with no problems. He and others said they’d like to see what they feel is common sense prevail over strict adherence to rules that they feel may not be necessary.

While addressing the City Council, Emily Wilson expressed her “deep disappointment in your petty enforcement of arbitrary permits and supposed safety concerns.”

“This absolute unsupportive, cold, heartless implementation of policy disturbs me,” she said.

Orin also voiced his displeasure and told the council that activities like music and skating “helps get all the negative energy out of me.”

A day later he even created his own political cartoon showing himself drumming in the Lompoc Wine Factory while surrounded by fire — an apparent take on the idea that the venue is unsafe.

Bridge, who said he remains optimistic that a resolution will soon be reached, extended on that point.

“It’s a metal building with concrete floors and barrels,” he said. “There’s not a big fire hazard here.”

While some have suggested moving to a new venue — two members of the City Council even offered to pay for use of the Dick DeWees Community and Senior Center, according to a city spokeswoman — Sena said that isn’t an appealing option.

“The very reason we do it over there [at the Lompoc Wine Factory] is because it’s the perfect venue for us acoustically, space-wise, and let’s not forget — we’re a business, they’re a business, and we have the right to try to make money at these events,” Sena explained. “They hope to sell wine and we hope to sell tickets — and the ticket money would all go to our foundation which helps provide music lessons for kids. So, a lot was lost.”

Although the Wilsons are planning to move after this month’s Flower Festival, Emily Wilson said she would consider making a special trip back to her hometown if the event ends up being rescheduled.

Either way, she said this whole experience could prove valuable for her son.

“He’s proud of himself for being able to participate in local politics at such a young age,” she said. “I think that’s an awesome lesson for him to learn — that he has a say in what happens in his town.”

Although it took a lot longer than everyone involved would have liked, it appears as though a dispute between the city of Lompoc and a local winery over the business’s ability to host music recitals has reached an amicable conclusion.

Orin Wilson drew this cartoon to illustrate the cancellation of his music recital over Lompoc regulations.

Orin Wilson,11, practices drumming during a lesson at Certain Sparks Music in Lompoc.