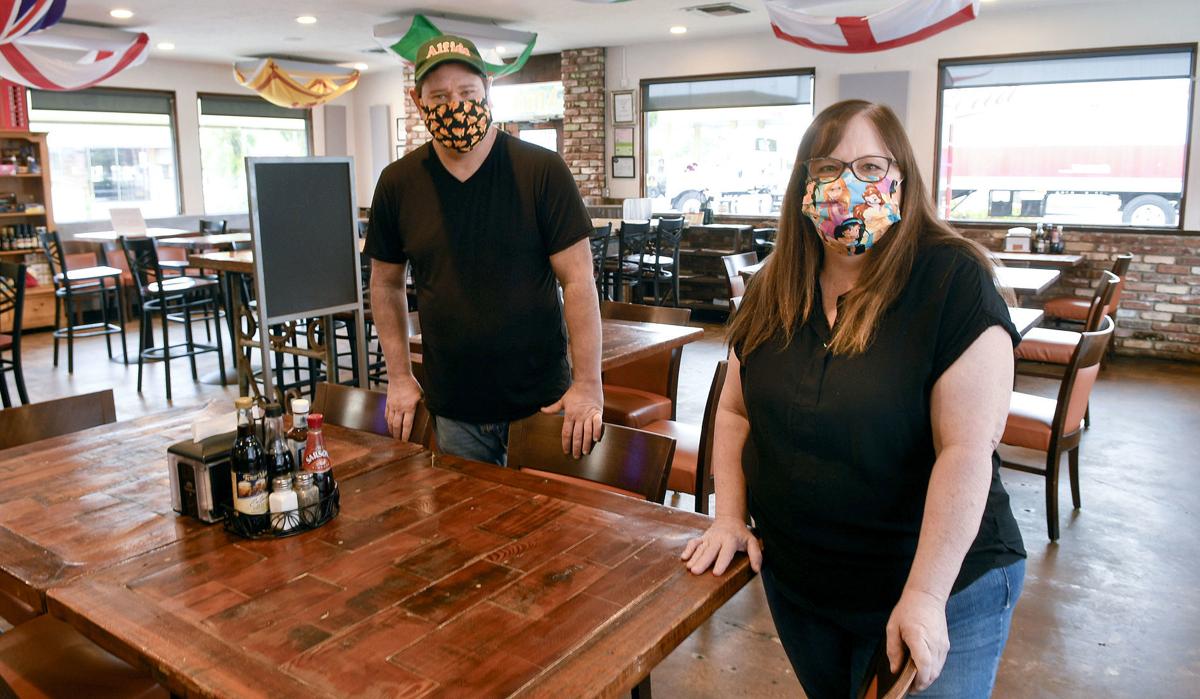 Nellie Sewall, right, and her business partner, Mike Sewall, are shown this month at Alfie's Fish & Chips, a restaurant they co-own in Lompoc. Nellie has had to take a step back from the business as she battles cancer. 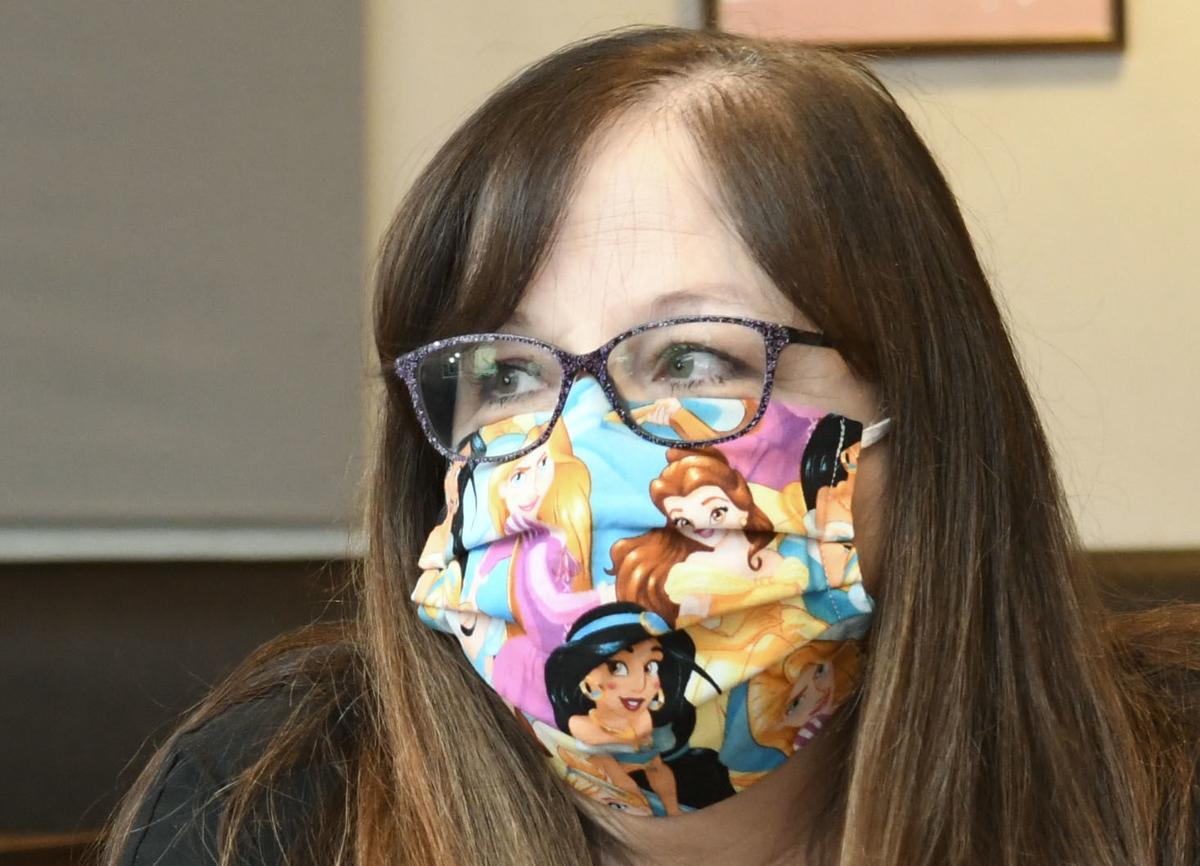 Nellie Sewall is shown this month at Alfie's Fish & Chips, a restaurant she co-owns in Lompoc. 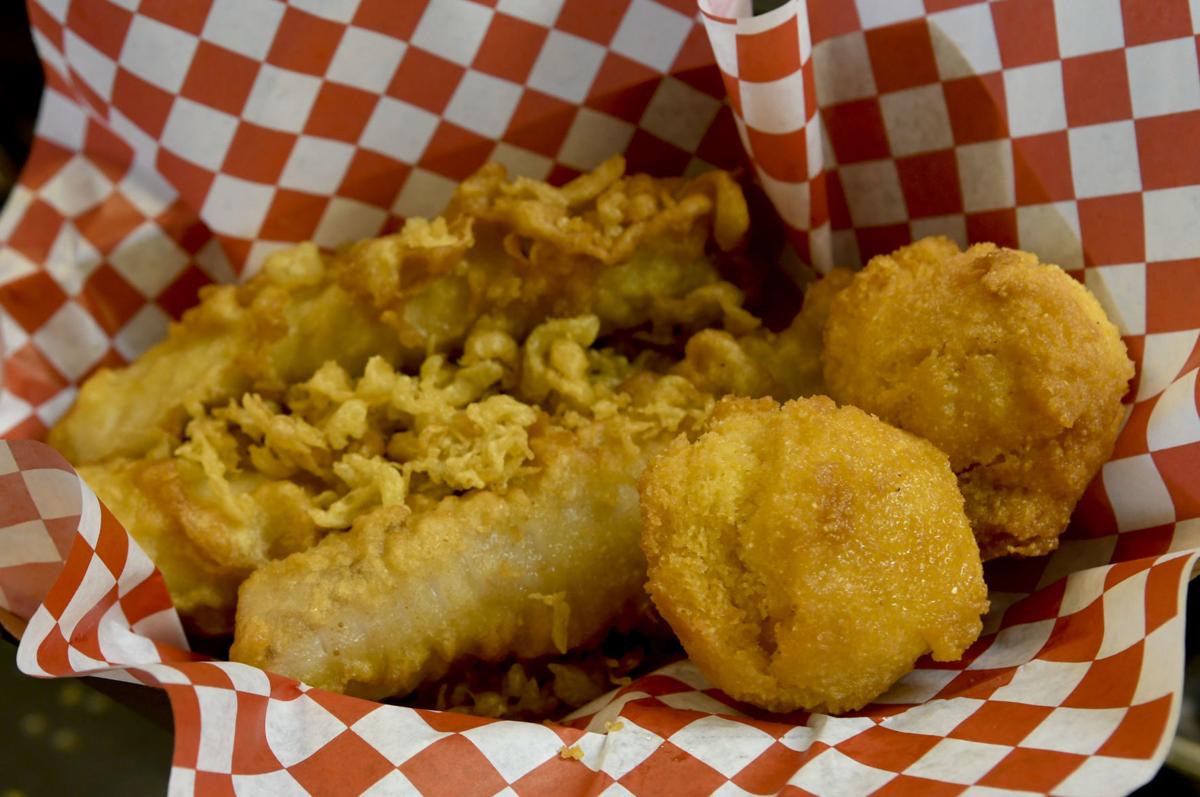 An order of fish and hushpuppies from Alfie's Fish & Chips is shown in this Sept. 13, 2019, file photo. Nellie Sewall, one of the restaurant's owners, has opened up about her battle with cancer. 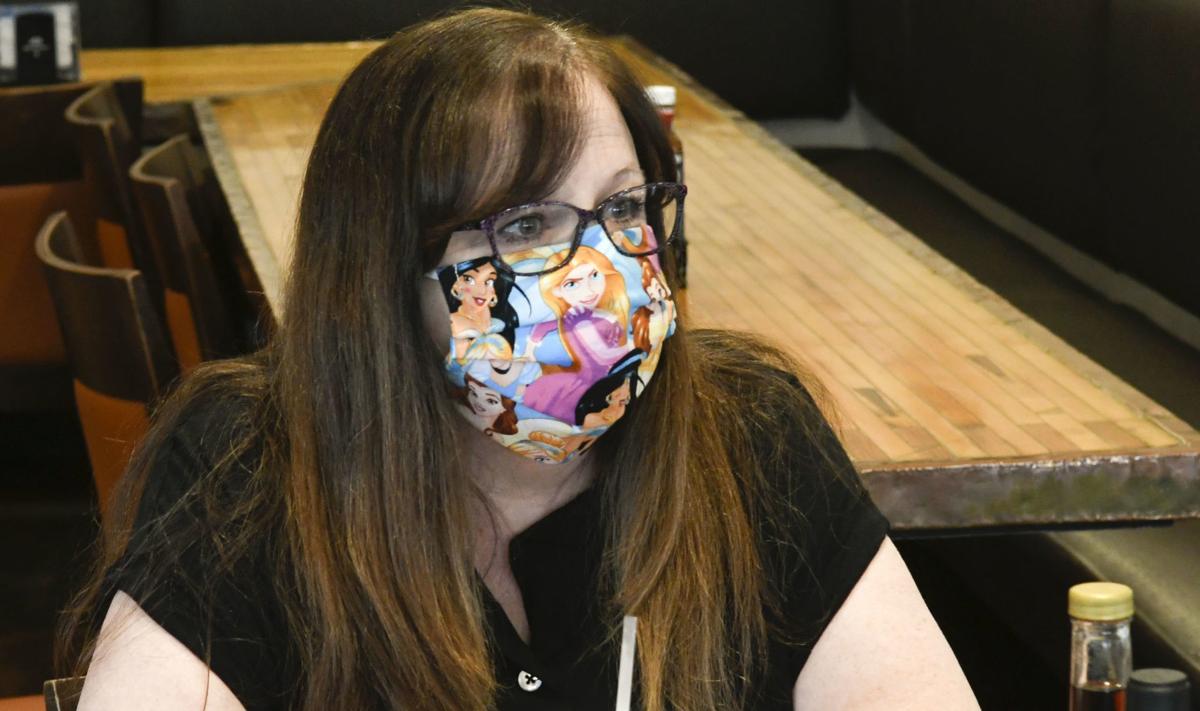 Nellie Sewall is shown this month at Alfie's Fish & Chips, a restaurant she co-owns in Lompoc. She has had to take a step back from the business as she battles cancer.

When Nellie Sewall, a co-owner of Alfie’s Fish & Chips in Lompoc, began to experience back pain while working in early April, she figured it was simply due to logging too many hours at the office.

Nellie, who owns the restaurant with her ex-husband Mike Sewall, initially injured her back last October while helping relocate Alfie’s to its new building at 610 North H St. Then, when the COVID-19 pandemic led to widespread business closures in mid-March, she increased her workload to help the restaurant adjust to a new takeout-based model in an effort to stay afloat.

It didn't take long, however, for her to learn that the discomfort she was experiencing was way more significant than fatigue.

“I don't remember driving home, but I got home, and then around 3:30 in the morning, I woke up and I was still in a lot of pain,” Nellie said, attempting to piece together her memories of April 3.

Her son, Preston, ended up driving her to an emergency room, where doctors discovered that her appendix had ruptured. They also made another alarming discovery: She had two potentially cancerous masses in her stomach that were cause for concern.

After undergoing surgery for her appendix and further testing on the masses, Nellie — who noted that her mom’s side of her family had been “riddled” with cancer — was diagnosed with Stage III Non-Hodgkin lymphoma. The cancer, it was determined, had spread to four separate parts of her body.

“That was one word I hoped I’d never hear,” she said of cancer, “but, you know, it happens. Cancer doesn't care; it just takes whoever it wants and does whatever it wants.”

Nellie, who began chemotherapy treatments in June, has tried to maintain a positive outlook, despite all the negative news she has received over the past four months.

The timing of her health scare wasn’t ideal, as it occurred in the middle of an unprecedented global pandemic that could threaten her livelihood, and less than a year after she and Mike had exhausted most of their financial resources to move their restaurant to its new, larger location. It's in part because of that latter issue that her now-adult children created a GoFundMe page to help with her bills.

“I'm positive I'm gonna get through this,” Nellie said. “It's gonna take a while and it's gonna be draining, but I will make it through this and I'll be OK when it's all over with. It may come back in a few years — who knows? — but that's just something I’ll have to deal with then. I have three grandchildren and four children to see grow and I want to be there for that, so I’ll do what I have to do.”

Despite the pain she suffered, Nellie said she views her appendix rupturing as a blessing.

“They said that I probably had this in my body for about two to three years,” she said of the cancer. “Lymphoma is so slow growing that most people don’t see symptoms until it’s too late. If my appendix hadn’t ruptured, I probably wouldn’t have known until it was past fixing.”

Mike Sewall noted that Alfie’s has a “whatever it takes” attitude that has carried the business through past obstacles. He said he doesn’t see this situation being any different.

“We have a choice,” he said. “We can all just sit and cry about it or we can stay positive and focus on our grandkids and focus on the positive things in life.”

Mike doesn’t hold back when describing his ex-wife's importance to the overall operation of Alfie’s.

“Nellie is responsible for our ease of transition to this place,” he said, referring to the restaurant’s new building. “She set up all the new systems. Going from one space to another sounds simple, but we had to set up whole new systems of where people are stationed and how things are done. All those systems were set up by Nellie.

“She made this place work,” he added. “And it worked on day one because of her.”

Both owners credited their staff and said they were confident Alfie’s would be able to weather the latest round of pandemic-related restaurant closures, which went into effect last week.

Because of the chemotherapy compromising her immune system, Nellie has had to take weeks off after treatments. And even when she is able to work, she now has to take frequent breaks to compensate for her body more easily running out of energy.

Nellie said she is looking forward to resuming a larger workload when she is able, but Mike said there is no rush.

“I don’t want to put any more guilt than she already feels on herself,” he said. “As far as I’m concerned, she needs to take care of herself; whatever it takes. We’re using that phrase a lot: Whatever it takes. We did it when we moved and we’re doing it now. Whatever it takes for her to get healthy and to get better, because we’ve got a large family and Nellie is at the top of it.”

Nellie, who was married to Mike for 13 years before divorcing seven years ago, said she’s thankful to have her ex-husband's support.

“We’re divorced, so most people would be like, ‘What?’” she said, laughing. “But he’s been very good about it.”

Mike interjected: “We’re still a family; we just happen to be divorced.”

Both Nellie and Mike noted that they did whatever they could to fund the relocation of Alfie’s last year, including utilizing much of their savings and racking up credit card debt.

“It took all of our savings and then some,” Nellie said.

They noted that they were able to acquire a small federal Paycheck Protection Program loan during the pandemic. That helped them rehire the three staffers they let go after the shutdowns began — one was pregnant and another was at heightened risk for COVID-19, so the Sewalls said they let them go so they could be eligible for unemployment benefits — and even hire additional staff to help make up for the loss of Nellie.

In what turned out to be fortuitous timing, the Sewalls purchased a health insurance plan for their business last year after going several years without. Although the plan was expensive, they said, it quickly paid off when Nellie’s medical issues pushed her past her out-of-pocket maximum threshold, leaving her new insurance to cover about $100,000 in bills.

But, she pointed out, that deductible reset on July 1, meaning she will likely be facing significant bills from her upcoming treatments. She is scheduled to undergo chemotherapy every other month for the next six months, and that could be extended if she learns that the cancer has spread to her bones. She expects to learn about that as soon as this week.

“A lot of people think, ‘Oh, you own a restaurant, you must be rich,’” Mike said.

“It’s not like that,” Nellie added. “We’re like everybody else; we live paycheck to paycheck sometimes. There’s times when we’ve even not been able to pay ourselves. So, financially, this has been very draining for me.”

Nellie noted that she grew up on a farm in Ohio and was always taught to never ask for handouts.

It’s because of that mindset, she said, that her children created the GoFundMe page without her knowledge.

“My kids kept telling me, ‘You’re going to be surprised by how much people will care,’” she said, as she wiped away tears that began to pool under her face covering. “And it has been surprising. I’ve been blown away by all the support.”

She noted that customers have dropped off or mailed in cards, some with money and some without, since learning of her diagnosis, and that friends and family have also extended support.

Some people, Nellie said, have told her they couldn’t help financially but that they wanted to pray for her. She said those prayers have also been greatly appreciated.

“I don’t want people to give me something that they don’t have,” she said.

“My parents always told me if you can’t afford something, don’t do it,” she added. “But this is something I had no control over, so I want to thank my kids for doing all this, and all the people for supporting me.”

To help remove some of Nellie’s financial stress as she focuses on her health, her now-adult children created a GoFundMe page titled “Help Pay Nellie’s Medical Bills.”

The page, located at www.gofundme.com/f/gqc9ya-help-pay-nellies-medical-bills, had raised a little more than $9,200 toward its $50,000 goal as of Tuesday afternoon.

Staff at the Lompoc Aquatic Center, located at 207 W. College Ave., welcomed back lap swimmers and began reintroducing some other programs on the first day of public access since the facility was closed on March 13 due to the COVID-19 outbreak.

Nellie Sewall, right, and her business partner, Mike Sewall, are shown this month at Alfie's Fish & Chips, a restaurant they co-own in Lompoc. Nellie has had to take a step back from the business as she battles cancer.

Nellie Sewall is shown this month at Alfie's Fish & Chips, a restaurant she co-owns in Lompoc.

An order of fish and hushpuppies from Alfie's Fish & Chips is shown in this Sept. 13, 2019, file photo. Nellie Sewall, one of the restaurant's owners, has opened up about her battle with cancer.

Nellie Sewall is shown this month at Alfie's Fish & Chips, a restaurant she co-owns in Lompoc. She has had to take a step back from the business as she battles cancer.