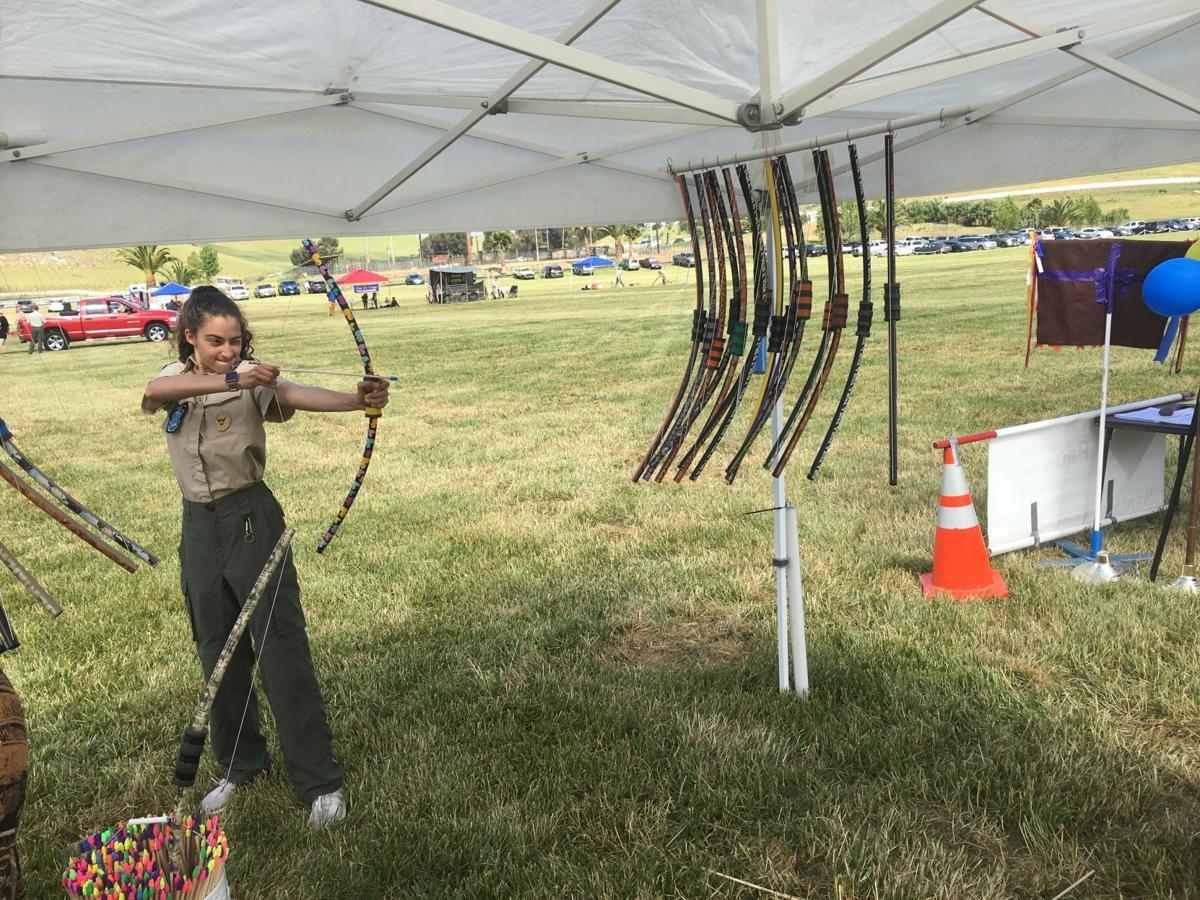 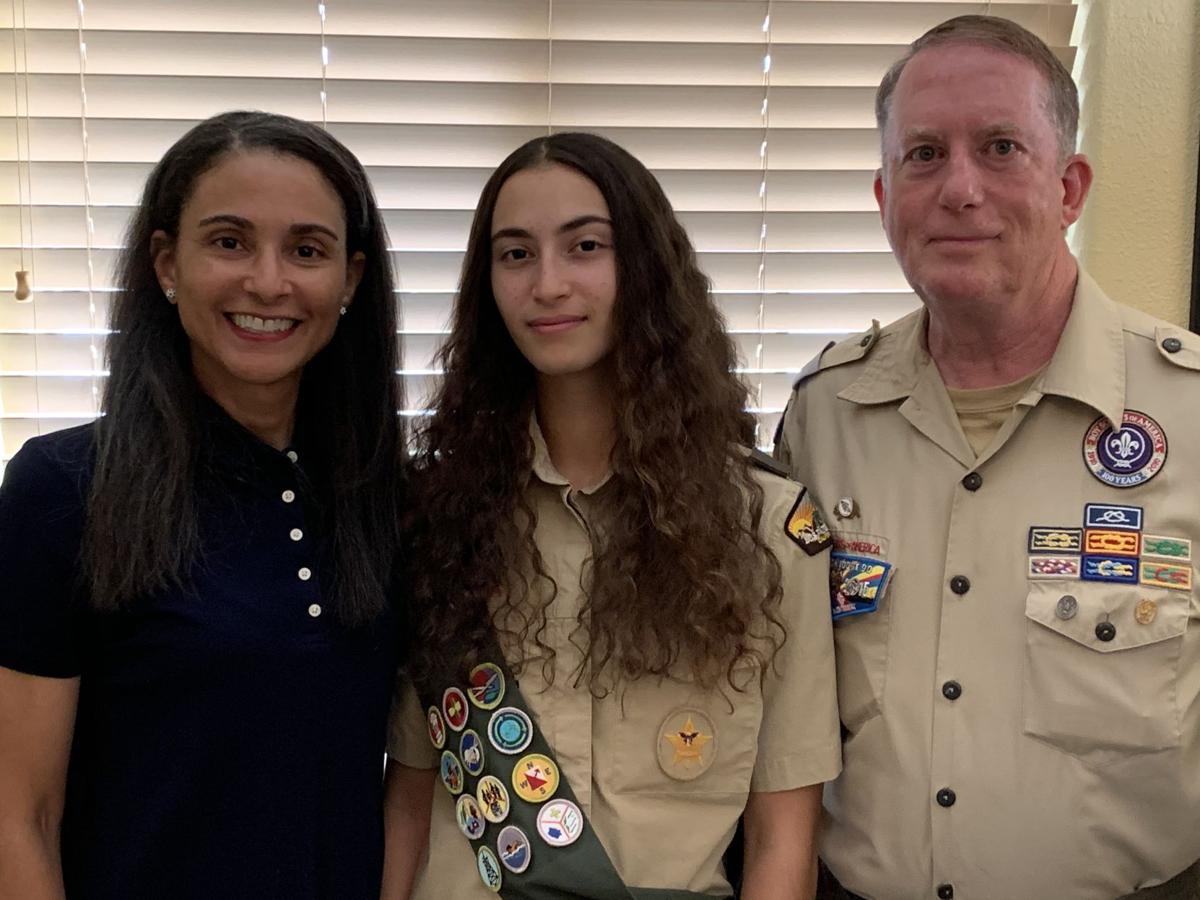 Sonia Wasserman is with mother, Sonia, and father Robert, an Eagle Scout. 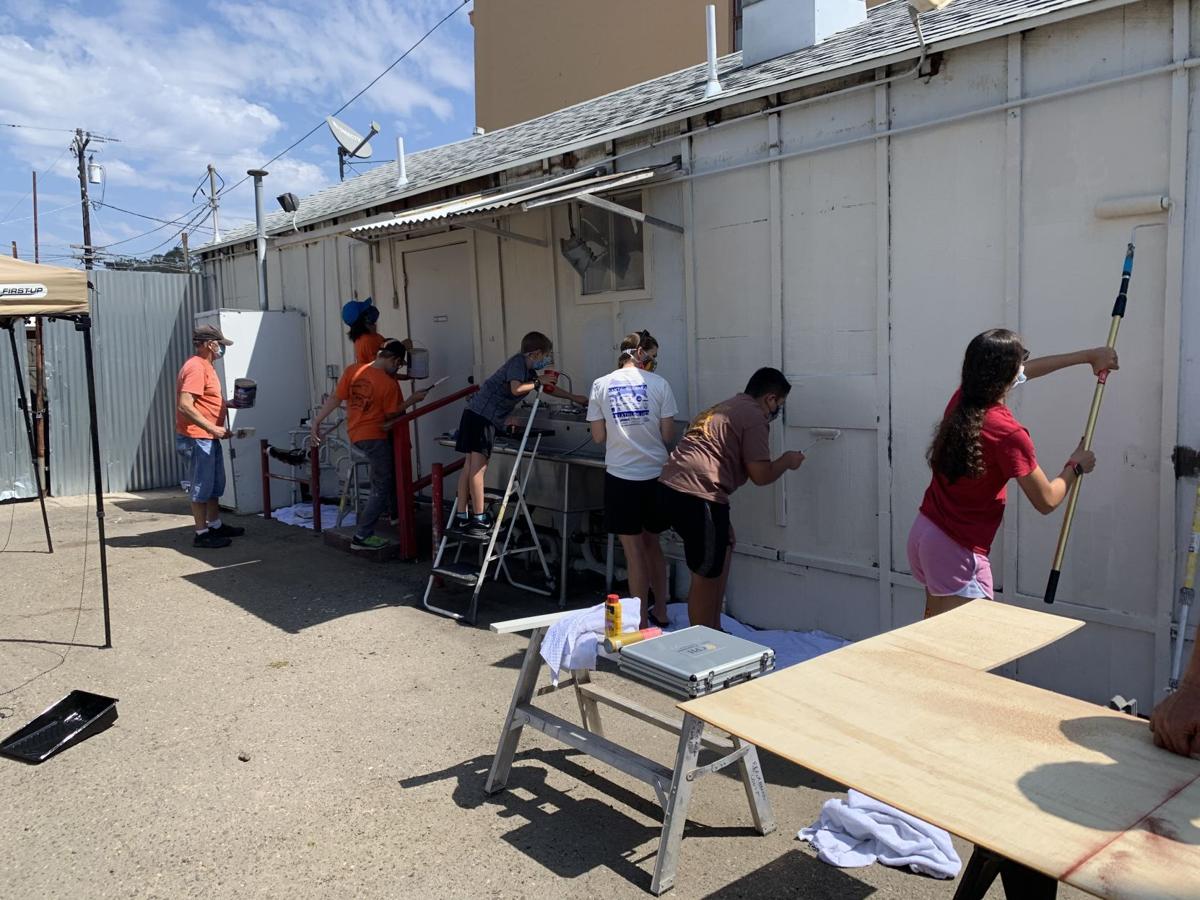 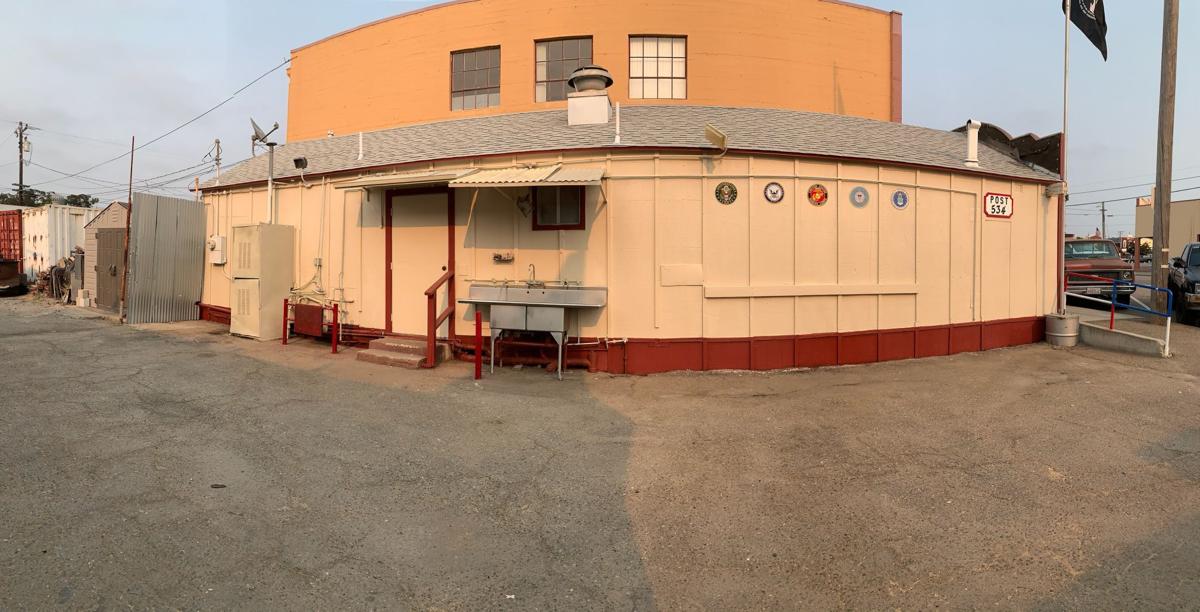 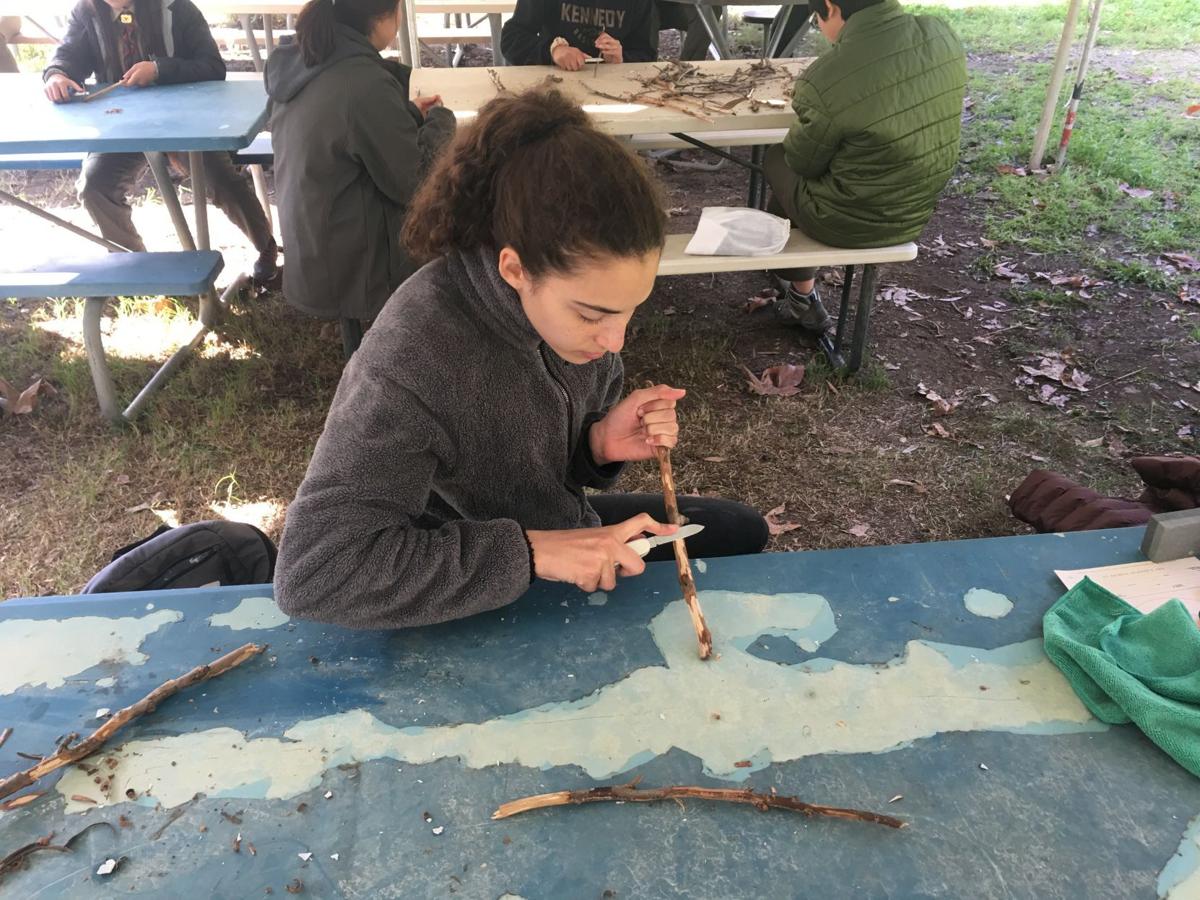 Sonia Wasserman demonstrates her skills with a knife during a Scout event. 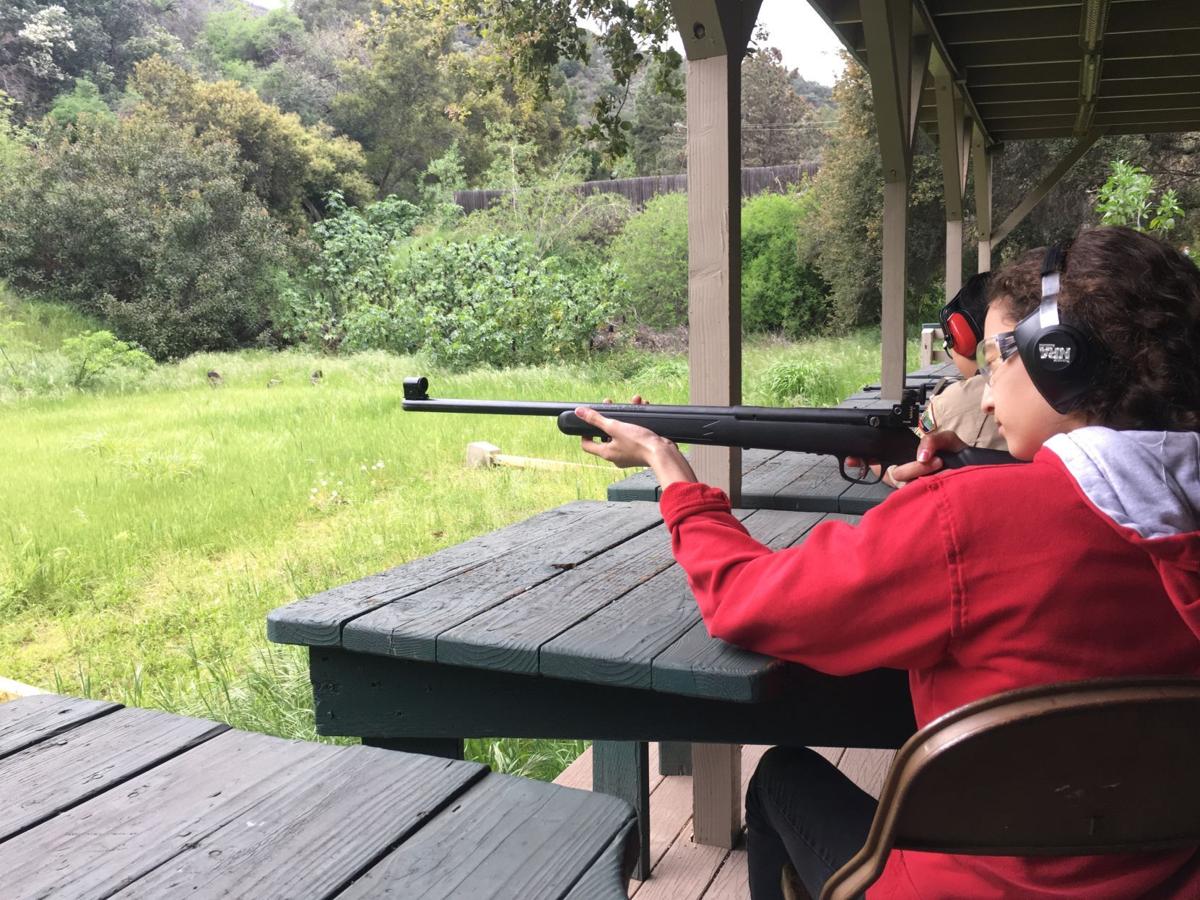 When Sonia Wasserman of Orcutt joined Scouts BSA last year, among the first cohort of girls ever officially to join the national program’s ranks, she wasn’t trying to prove anything. She was following in the footsteps of her father and brother, working to achieve the institution’s highest rank, and becoming a pioneer.

“I wasn’t really sure about it when I got into it, but I think it really has given me really cool opportunities and experiences. It’s always the things in life where you’re really uncertain whether it’s going to be good or bad that you end up having a good time,” Wasserman said.

She’d grown up alongside her brother, Allan Wasserman, as he achieved the Eagle rank, just like their father, Rob Wasserman, had done a generation before them. It wasn’t as if she didn’t already know what scouting was all about.

“There’s a lot, in this area especially, of controversy about girls getting in Scouts, but I think if somebody thinks they’re going to enjoy it, if you like adventure, being in the outdoors, it might be for you,” Sonia said.

Now she’s completed her Eagle project: wrangling half a dozen Scouts and a handful of additional volunteers to commit more than 100 hours to repair, restore and enhance an exterior wall of Orcutt’s American Legion Post 534 headquarters building.

Over Thanksgiving weekend, she was set to wrap up her final merit badge: cooking. Then it’s down to final interviews and her Board of Review.

“She’s been an incredible role model for my girls,” said Troop 78 Scoutmaster Hannah Rubalcava, who advises the Santa Maria Valley’s first female troop, which includes her own daughters.

Boy Scouts of America was established in 1910 as a spinoff of the original British scouting model established by Robert Baden-Powell “for the purpose of instructing boys of all classes in the principles of discipline, loyalty and good citizenship.”

By the 1960s, women served regularly as den mothers, Cub masters or den leaders, troop leaders, Explorer program advisors, and at the council level. In 1969, BSA opened its special-interest Explorers posts to young women ages 14 to 20, and two years later they were admitted to full membership in the Explorer program.

“Nationally, there have been a lot of changes in our membership policies toward more inclusion to make sure any family and individual who wants to join this program and participate has the opportunity, children and adults, regardless of religion, ethnicity, financial status, gender identity or sexual orientation,” said Los Padres Council Associate Development Director Erica Mundell-McGilvray. “The mission of Boy Scouts of America hasn’t changed. It remains to prepare young people to make ethical and moral choices over their lifetime.”

In 2019, those changes included opening the doors of its popular Scouts programs to girls. Seven Scouts BSA troops across the Central Coast’s Los Padres Council have incorporated girls including Troop 78 in Orcutt and Troop 007 in Buellton. Nearly 50 girls in the region signed up for the Scouts BSA program serving 11 to 17 year olds, and nearly 140 for Cub Scouts.

“It has been a great experience for our daughter and for us as parents. She has learned a lot, was exposed to the community, gained skills that are going to help her later on in life. I highly recommend it to any family that thinks that would work for them. It’s a great institution that has great people,” said Sonia Wasserman, the Orcutt Scout’s mother and namesake.

According to Los Padres Council President Trey Pinner, the inclusive policy largely has been well received. Troops remain separated by gender, but female troops, he said, follow the same program and standards as the male troops. Troops can be combined for activities like camporee or group campouts.

“Boys think differently than girls. They lead differently. Girls are probably ready to be leaders quicker than boys,” Pinner said.

“There’s definitely a different dynamic when you mix boys and girls. I think, as time goes on, it will become more acceptable to mix the boys and the girls, but I think it’s smart to ease our way into it and see what works. The structure’s fine for me for now. If it evolves over time, it’ll only get better,” Rubalcava said.

Local philanthropist George Bernard was so happy to see the doors flung open to girls that he donated $2,000 to each Northern Santa Barbara County girl's troop to help them get rolling.

“There’s something special here. I’ve been involved in a lot of special things in my life because of the connections and experiences I had in Scouting. These girls will get to do all that stuff, too,” said Bernard, who earned his Eagle Rank in the 1960s.

In summer 2019, Sonia was among the first members of a female patrol attending camporee. She and her patrol earned top awards in a variety of problem-solving challenges that incorporated leadership, teamwork and outdoor survival skills.

“You can’t make a difference if you’re too afraid to be the only person like you in a group. Engineering is male dominated, a lot of science majors are, but more and more women are coming into those things and being powerful. Girls who are afraid of doing things they want to because those things are male dominated should instead think of themselves as pioneers for future women,” the youngest Sonia said.

For more information about Scouting programs, to find local troops or to join, visit www.scouting.org.

With the assistance of 12 community members, Connell reported that on Nov. 26 and 27, cleanup of Route 246 headed west, starting at Brick Barn Winery, required 22 hours of labor which resulted in 20 bags filled with trash.

Sonia Wasserman is with mother, Sonia, and father Robert, an Eagle Scout.

Sonia Wasserman demonstrates her skills with a knife during a Scout event.