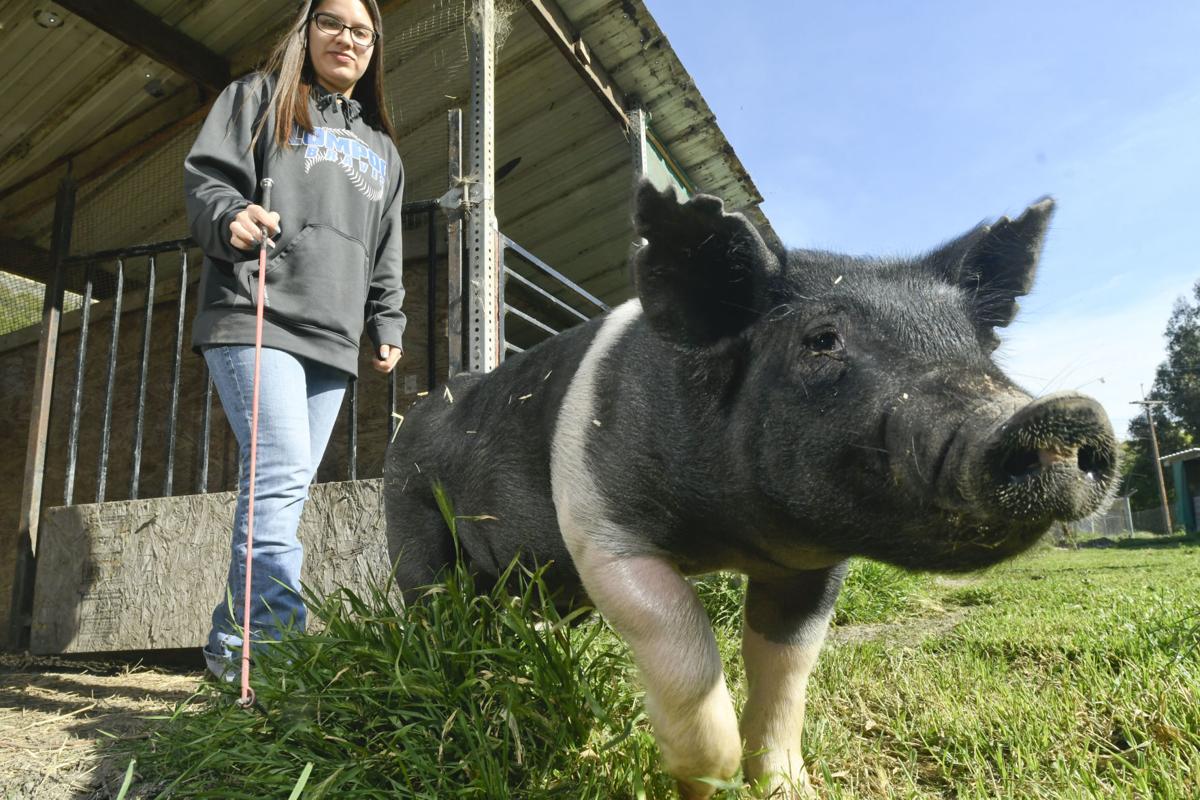 Jennifer Ayala, a senior at Lompoc High School, cares for her pig named Praise that she planned to sell during this summer's Santa Barbara County Fair. 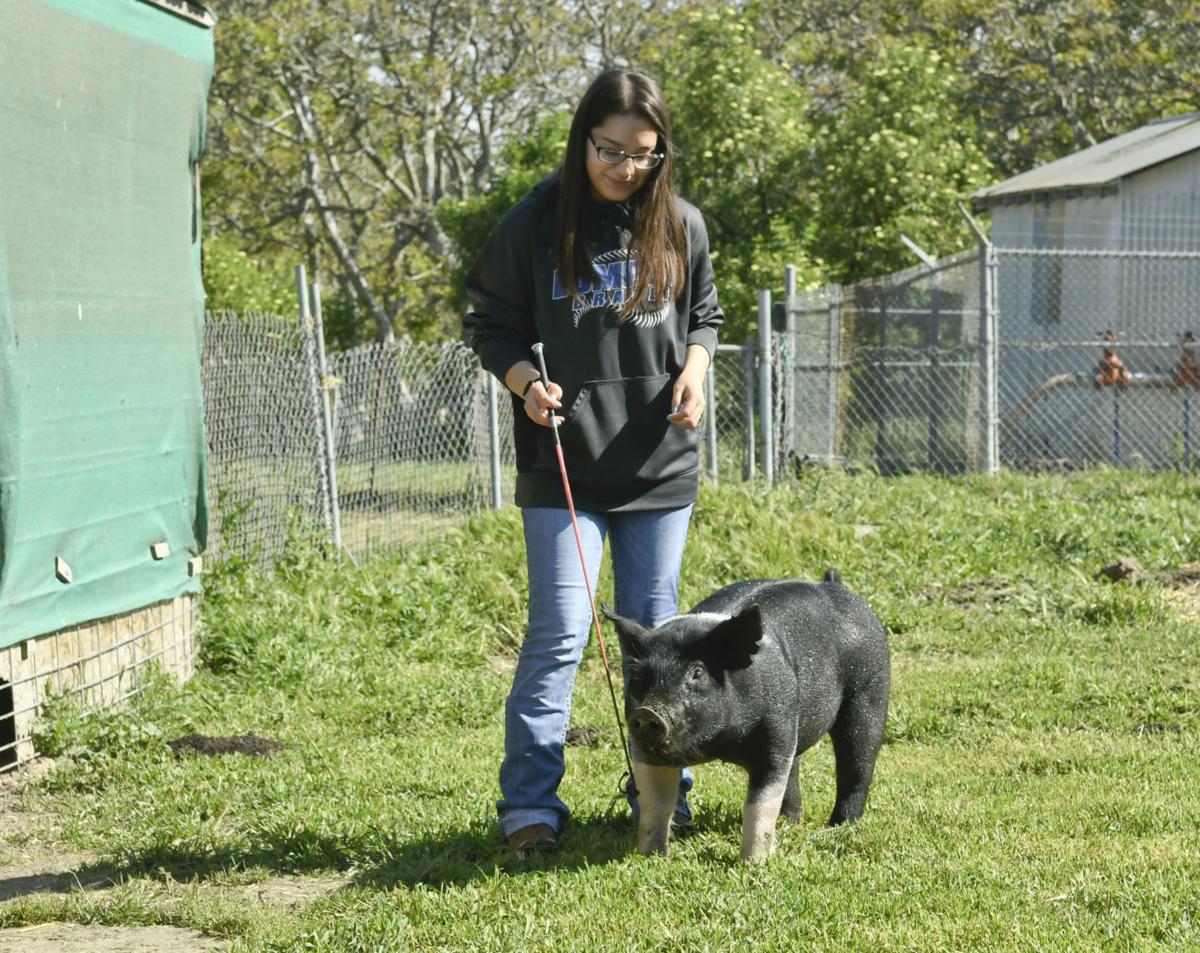 After raising her first hog through the Lompoc High School FFA program two years ago, Jennifer Ayala cried for a week after she sold the pig — which she named Partner, due to their closeness — at auction during the Santa Barbara County Fair.

Now a senior and raising Praise, her third pig in three years, Ayala finds herself on a different side of that emotional spectrum: worried that the COVID-19 pandemic may cancel this year’s fair and force her into debt as she prepares to go to college this fall.

Ayala, like many FFA students, took out a $1,000 loan this year through the U.S. Department of Agriculture to purchase Praise with the intent of selling him, ideally for a profit, at auction. With the coronavirus outbreak threatening the likelihood of the county fair, however, Ayala is now scrambling to find a buyer so she can repay that loan.

The past few weeks have been particularly stressful for Ayala, as she has come to accept the pandemic may lay waste to her plans.

“I think everyone right now is just kind of frustrated with everything,” Ayala said. “It’s just a difficult time. And for the kids who got loans, it’s like ‘OK, I owe this money. Now what?’”

This year's Santa Barbara County Fair has yet to be canceled, but after seeing so many other events get called off during the health crisis, Ayala said she’d prefer not to pin her hopes — and finances — to an event that may not happen.

Instead, she said, FFA advisers have begun encouraging students to try to sell their animals to private buyers, if they can.

Ayala said she’s reached out to some organizations around Lompoc and Santa Maria but has received little interest. Further complicating matters, she said, is that some foundations that have traditionally supported FFA by purchasing animals have announced that they will not be doing so this year, due to the negative impacts they’ve experienced from the pandemic.

Even in good times, she pointed out, it can be difficult to sell livestock.

Ayala said she sent about 30 buyer letters to local companies ahead of last summer’s fair, but still only got one person to come check out her pig in person.

“It was kind of disappointing because I had put in a lot of work, but it was OK,” she said. “We had a lot of fun.”

So far this year, she said, that has not been the case.

“I don't necessarily have a lot of connections with ranchers or with small businesses, so it's kind of difficult to reach out,” she said. “I’ve even asked family members, but I don’t think that’ll be an option anytime soon.”

The Fairpark’s board of directors is “watching things as they evolve," according to Fairpark spokeswoman Shelly Cone, and likely will wait until the end of this month before deciding whether to hold the fair, which is scheduled for July 15 through 19.

Cone noted the board has remained in contact with the Junior Livestock Auction Association, which organizes the FFA auctions.

In the event that the fair is not held, Cone said some contingencies have been discussed.

One of those, she said, could involve holding the livestock auctions on their own without the surrounding fair. She noted, however, that such a plan would face some potential obstacles — state and local health officials would need to be on board — and described it as a “last resort.”

The Fairpark board, Cone said, is also exploring ways to help connect FFA students with potential buyers outside of the traditional auctions.

“It is up to the individual families and the students that are participating if they would want to make a decision about their animal at this point and perhaps try to get a private buyer,” Cone said.

Cone noted other scenarios have been discussed but didn't know if those talks included consideration of a virtual auction.

Some larger buyers, according to Cone, have already pulled out of this year’s auctions, even if they are held in their traditional format, due to the economic downturn. So it is unknown how many buyers would participate in an online event.

“At this point there’s nothing definitive,” Cone said. “It’s just kind of a wait-and-see [situation].”

Ayala, who is preparing to attend Fresno State University this fall, said she doesn’t have the time to wait.

“Whoever wants to take Praise off of my hands is more than welcome,” she said. “Whether that be a local business, a butcher shop, or an animal rights group — I just need him off my hands. As sad as it is for me to say that, it’s my only option at this point.”

Despite this year’s difficult circumstances, Ayala said she has loved her time in FFA, which started as the Future Farmers of America program. She got involved her freshman year after watching her older brother, Edgar Ayala, excel in the program before he graduated from Lompoc High in 2014.

“The life is a climb, but the view is great,” she said of the program. “The life lessons that FFA has taught me, I wouldn’t change for the world.”

At Fresno State, Ayala plans to major in agricultural communication and minor in business. She said she’d like to one day own a marketing company.

Before focusing on all that, however, she first needs to sell Praise and repay her federal loan.

“It's like I’m a college student who's in debt before even starting college,” she said, noting her original plan was for Praise to be a money-maker heading into college.

To be sold at the junior livestock auctions, pigs must weigh between 225 and 270 pounds. Although Praise was just 114 pounds when Ayala weighed him in mid-April, she said he is well on track to reach that target weight by July, when the fair is scheduled.

'Devastated': High school seniors grapple with reality of not returning to school

Securing a buyer would be "huge blessing" for Ayala, who added, "It would be a weight off my shoulders."

Joke of the day table