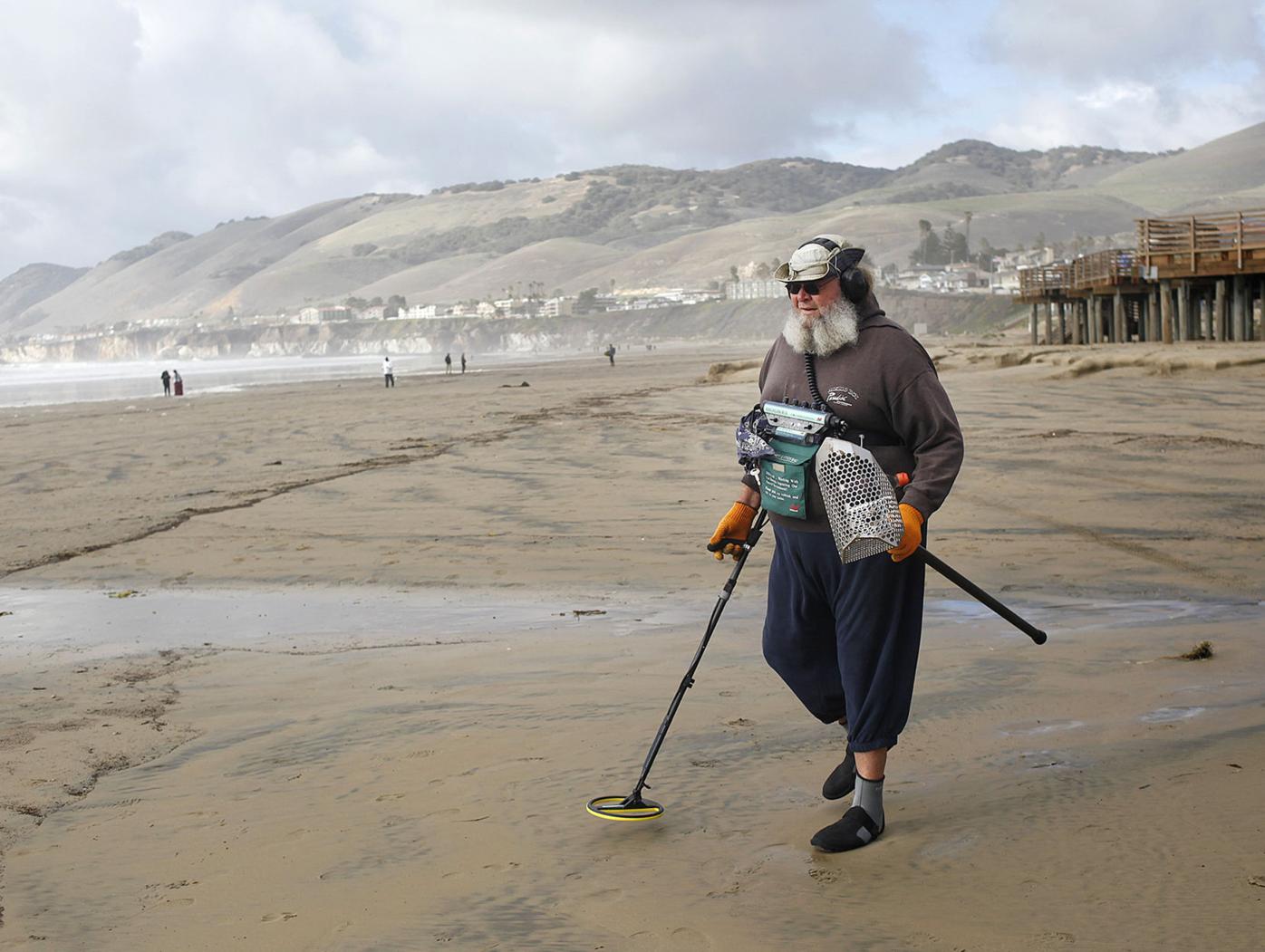 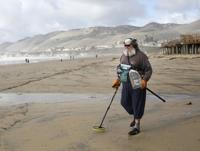 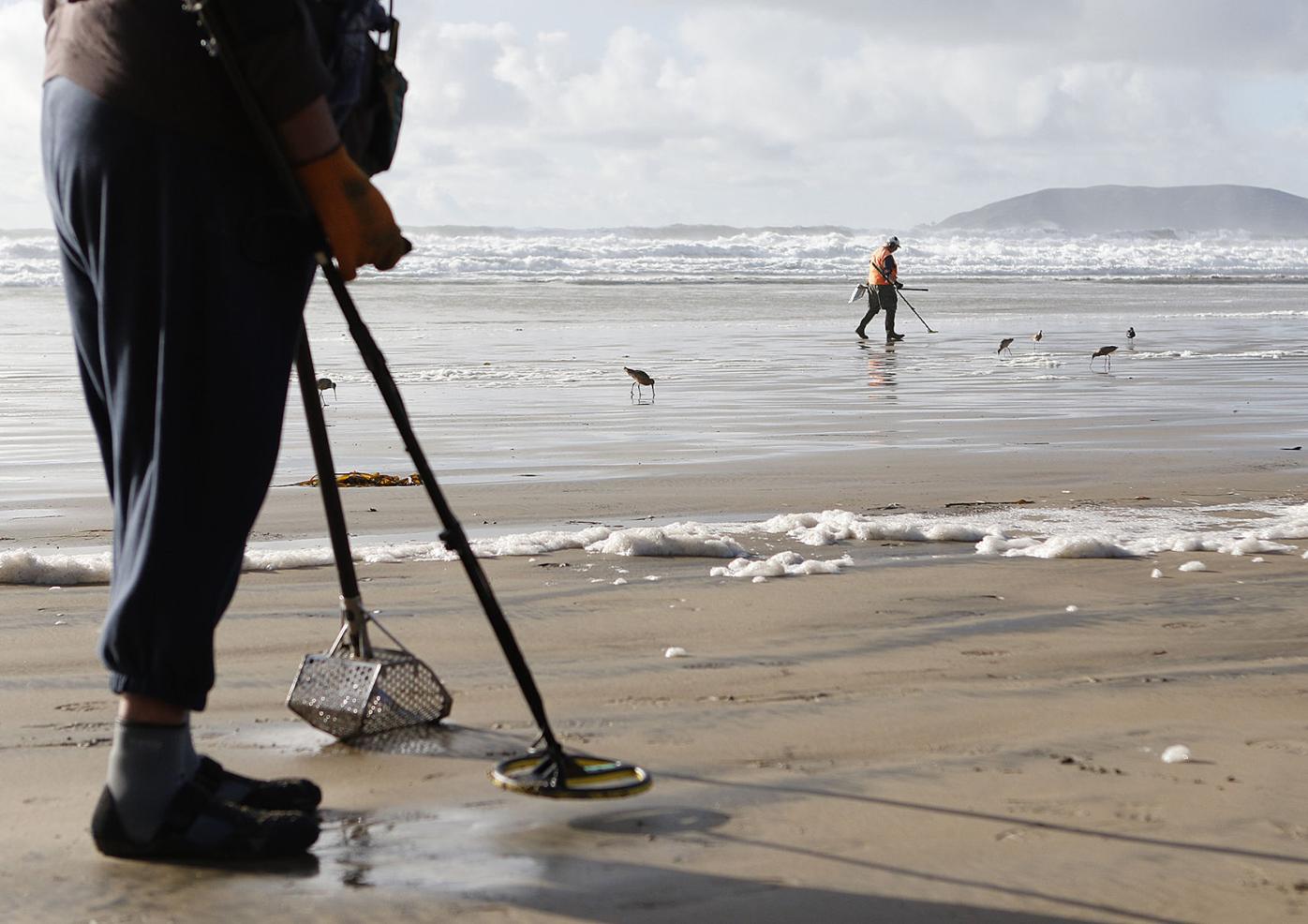 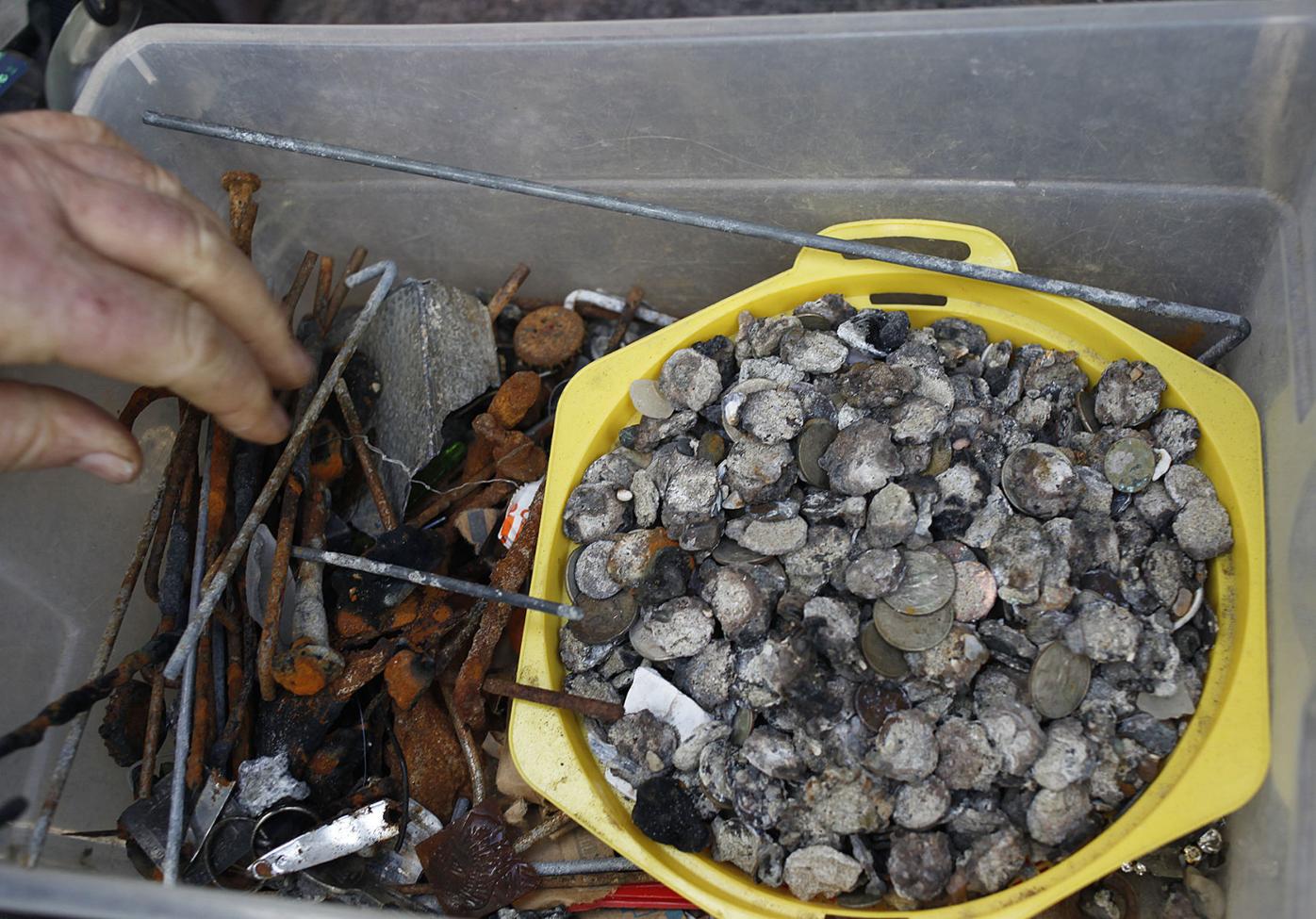 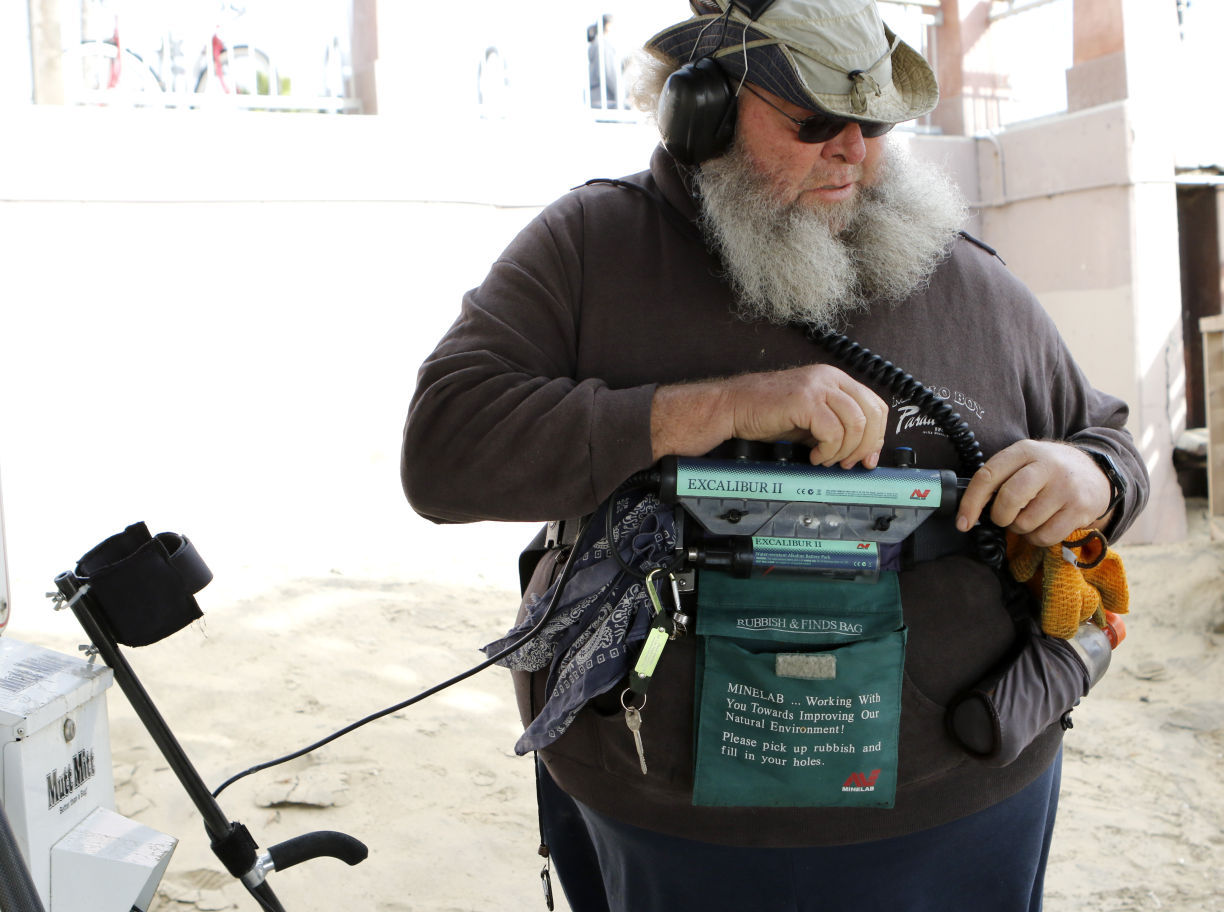 Larry Royal gets his metal detector ready before heading out to Pismo Beach to search for treasure last Thursday. 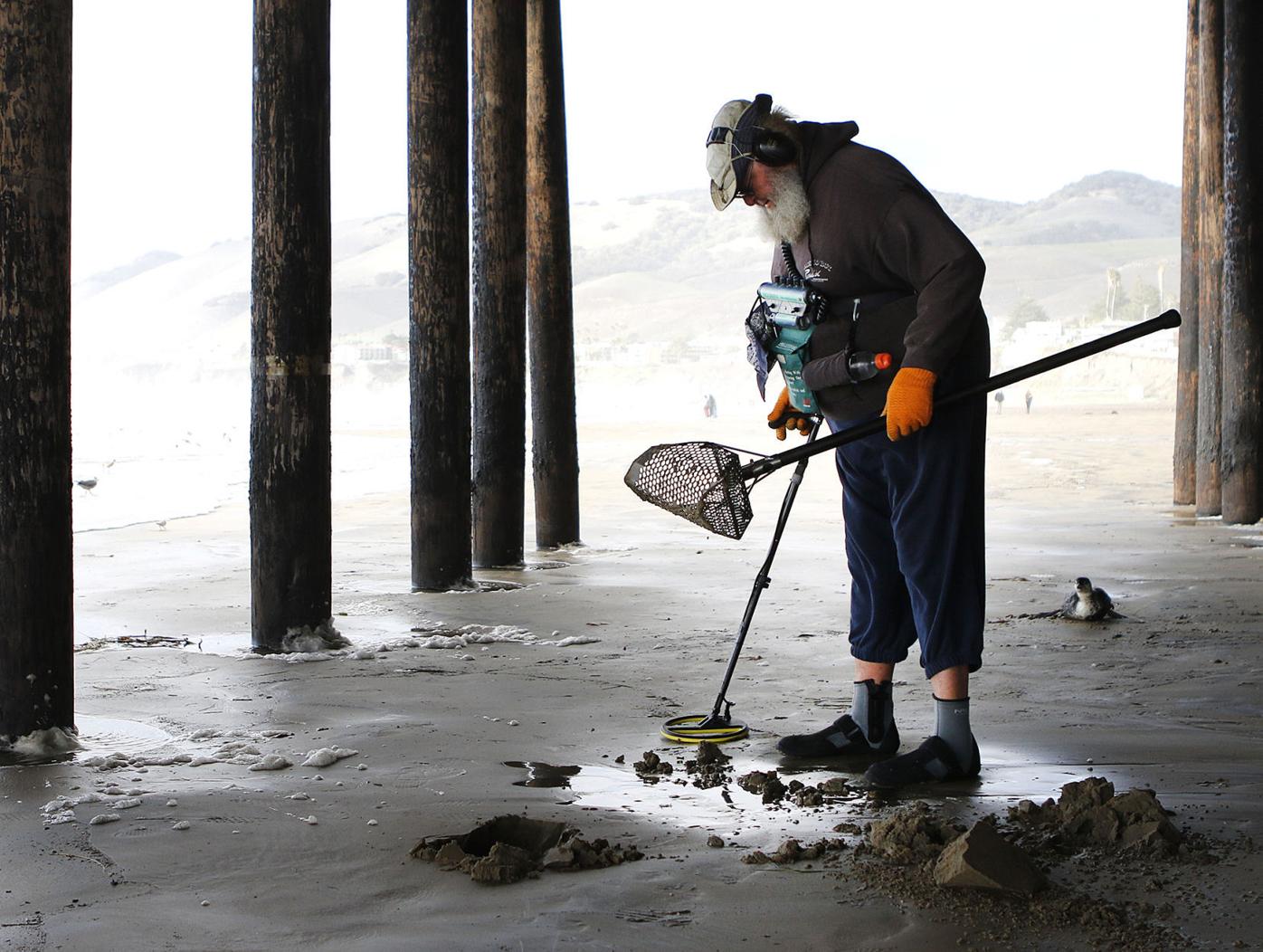 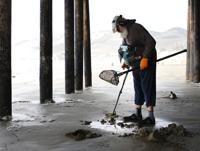 Larry Royal gets a hit on his metal detector underneath the Pismo Pier last Thursday.

Larry Royal gets his metal detector ready before heading out to Pismo Beach to search for treasure last Thursday.

Larry Royal gets a hit on his metal detector underneath the Pismo Pier last Thursday.

After a day on the beach, your spouse looks at you and says, "I lost my wedding ring." She slumps over, realizing that her expensive, one-of-a-kind, 1-carat diamond is gone forever because the chance of finding that ring on a crowded beach in the sand is next to impossible. Who are you going to call?

Seven years ago, Royal's wife died. After her loss and numerous surgeries, Royal couldn't move from his couch. His doctor told him unless he improved his health and got up, he was going to die. That's when he made the life-changing choice to dust off the metal detector and head to the beach.

Since then, the longtime resident has lost 100 pounds and continues to hunt Pismo Beach three hours a day, seven days a week, rain or shine. He also can be spotted at Avila and Shell beaches.

Royal doesn't want to keep these items; he wants to see them returned to their owners.

"On busy weekends, I park my car somewhere where people can see, and I am happy to help them find their lost possessions," he said. "My services are always free. People are welcome to tip me."

During the summer, he gets four to five calls after a busy weekend and encourages people to call as soon as possible.

"The sooner, the better. A lady called and told me what time of day she was at the beach and where she sat, and I was able to look up the tide and wind that day," he said. "I found her ring in about 45 seconds"

In September, he found Rosa Pineda's ring just 19 days after the Visalia resident lost it in the water at Shell Beach. Royal finds 40 to 60 rings a year.

Using rain boots, giant headphones, an Excalibur II metal detector and a custom carbon fiber pole with a stainless steel basket at the end, both search under the pier digging up change, a rusted tent spike and a can.

"If I dig it up, then I take it with me. I don't leave trash on the beach," Royal said.

"I have a long way to go to catch up to you,” joked Williams about his findings compared to Royal's.

"If I find a class ring, I try to track the person down and return the ring," Royal explained.

Royal is part of a website called theringfinder.com, where people can find treasure hunters all over the world.

"I love making the book of smiles. That's my goal," he said, referring to an online book of people posing with their hero treasure hunters after finding lost possessions.

At the end of each month, Royal donates 10 percent of the reward money and change he finds to the Food Bank Coalition of San Luis Obispo County and the president of the Central Coast Treasure Hunters Association, which has 44 members.

Daniel Dreifuss is a staff photographer for Lee Central Coast Newspapers. These are his observations.