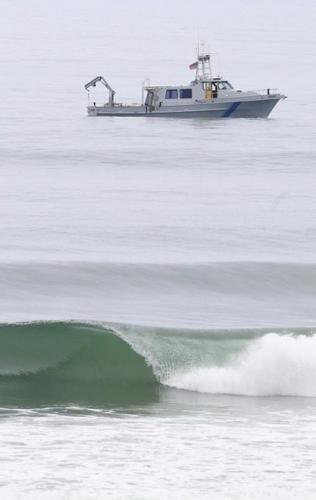 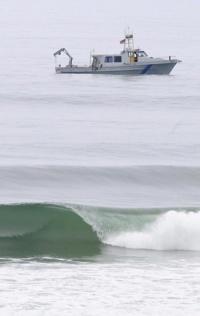 The state Fish and Game ship Bluefin patrols the waters off Surf Beach at Vandenberg Air Force Base near where the attack occurred.//Len Wood/Staff 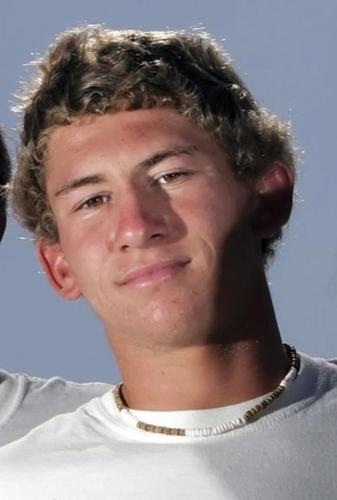 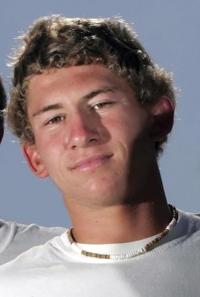 Buy Now
A shark described as being 14 to 20 feet long is believed to have bitten a hole in a boogie board, shown above, ridden by Lucas Ransom. The UCSB student suffered a massive wound to his left leg in the attack about 100 yards off Surf Beach.//Santa Barbara Sheriff photo
1 of 3

The state Fish and Game ship Bluefin patrols the waters off Surf Beach at Vandenberg Air Force Base near where the attack occurred.//Len Wood/Staff

Buy Now
A shark described as being 14 to 20 feet long is believed to have bitten a hole in a boogie board, shown above, ridden by Lucas Ransom. The UCSB student suffered a massive wound to his left leg in the attack about 100 yards off Surf Beach.//Santa Barbara Sheriff photo

A UCSB student body-boarding at Surf Beach with a friend died Friday after receiving a massive leg wound during a shark attack that led officials to immediately close all beaches at Vandenberg Air Force Base.

Lucas McKaine Ransom, 19, from Romoland in Riverside County, was about 100 yards off the beach just before 9 a.m. Friday when the shark suddenly pulled him under the water, reportedly biting off his left leg, according to the Santa Barbara County Sheriff’s Department.

His friend and witnesses pulled Ransom out of the water, but Vandenberg firefighters pronounced him dead at the scene, the Sheriff’s Department said.

The friend, Matthew Garcia, said Ransom cried out for help before he was pulled under and the waves turned red with blood.

Garcia said he was two feet from Ransom when the shark rose out of the water without warning and bit into Ransom’s leg.

Garcia said his friend cried “Help me, dude!” before disappearing

As huge waves broke over his head, Garcia tried to find his friend in the surf but couldn’t. He decided to get help, but turned around once more as he was swimming to shore and saw Ransom’s red body board pop up. Garcia swam to his friend and did chest compressions as he brought him to shore.

The ocean was calm and beautiful before the attack, with 8- to 10-foot wave sets that the friends had been tracking all week as they moved down the West Coast from Alaska, Garcia said.

“There was no sign, there was nothing. It was all very fast, very stealth,” said Garcia, 20.

The pair, best friends since high school, had joked the night before about the chances they would be attacked by a shark, Garcia said. It was the first time either had been to Surf Beach, and they planned to surf until about 11 a.m. and then go to class, he said.

Ransom’s mother, Candace Ransom, said her son had been home last weekend, but spent most of the time studying for midterm exams.

She last spoke to him Friday morning, when he told her he was going to surf sets of 8- to 10-foot waves at a beach that was new to him. His mother encouraged him not to go in the water, she told the Associate Press.

“I said, ‘Honey, if they’re so pretty why don’t you just sit and watch them. You’re at a place you’ve never been to before,’” Candace Ransom said. “He said, ‘Mom, don’t worry, I’ll be fine and I’ll call you when I finish up.’”

The attack prompted Air Force officials to immediately close all of Vandenberg’s beaches for at least three days.

“Right now, that’s a safety precaution,” said Vandenberg spokesman Jeremy Eggers. “We’ll re-evaluate that closure as time goes on, but right now the base beaches are closed for 72 hours.”

By Friday afternoon, Air Force officials said signs had been posted advising of the closure, and that crews would monitor the area by walking along the shoreline and riding all-terrain vehicles. Santa Barbara County crews also will conduct helicopter patrols.

Shortly after 1 p.m., people showed up at Surf Beach unaware of the tragedy. Others were on hand to greet passengers arriving on the Amtrak train that stops at Surf’s unmanned station.

Lompoc resident Joe Hecker brought his daughters, clad in bathing suits, to the beach to collect shells in the sand, only to learn of the attack-related closure.

“It’s unfortunate. It’s scary. It could be anybody’s kid,” he said.

Typically, he added, the warnings about Surf Beach hazards center on the dangerous undertow rather than sharks.

As he talked, two Coast Guard vessels performed patrols parallel to the coastline more than four hours after the attack.

Federal and state Fish and Game officials are working to identify the type of shark, which was described as being 14 to 20 feet in length, according to sheriff’s officials.

The Sheriff’s Department released pictures showing Ransom’s boogie board, minus a huge chunk, about 12 inches wide at the biggest part.

The Sheriff’s Department Coroner Bureau will conduct an investigation into the death, Air Force officials said.

Shark sightings occur periodically in the waters off the Central Coast. In July, a shark, estimated to be about 4 feet long, reportedly bit a surfer’s foot in Pismo Beach. Another sighting in September led to warning signs being posted in Pismo.

Earlier this year, authorities said that the increased number of dead sea otters with signs of shark bites along the Central Coast in August led Fish and Game officials to believe white sharks were “taste testing.”

The California Department of Fish and Game (DFG) scientists collected nearly three times as many shark-bitten otters in Pismo Beach and Morro Bay in August compared to the area’s 10-year average. A reported 19 injured or dead otters with shark bites were collected last month. Seven have been discovered in the first two weeks of September.

Over the past 10 years, the average number of shark-bitten otters for August is seven and for September is six, according to DFG.

In September 2008, a shark bit a surfer’s board at Surf Beach, and base officials issued a 48-hour warning to beach users. Base officials said at the time that they believed it was the first shark incident off Vandenberg and sought recommendations from other coastal parks about their policies for beach closures.

The Central Coast’s last confirmed fatal attack took place in 2003, when Nipomo resident Deborah Franzman died when a shark bit her as she was swimming in the ocean at Avila Beach.

Ransom was a junior majoring in chemical engineering, but was in the process of changing his major to chemistry because he wanted to be a pharmacist, according to his mother.

He had graduated from Perris High School, where he spent four years as a member of the swim team and also was part of the water polo team.

“He was probably… high energy is the best thing I can explain about him,” said swim coach Robert Long. “He was one of the kids that everytime I wanted him to perform when it came to crunch time, he would.”

In July 2007, Ransom was one of three lifeguards credited with saving the life of a boy in Murrieta after an incident at a community pool, according to a Riverside Press-Enterprise story.

Long, who has coached at the school since 1998, spent a significant part of Friday talking to current and former students and parents about the tragedy.

“We’re a pretty tight-knit group,” Long said, adding that he spoke to former teammates spread out across the country to notify them of Ransom’s death.

“It’s initially a shock,” added Long, who also coached Ransom’s older brother. “The type of attack — and kind of out of the blue — it’s really shocking.”

Garcia is also a Perris alum, and Long described him as a tough kid.

“I don’t think Lucas could have been out in the water with anyone better than him,” Long said of Garcia.

The Associated Press contributed to this story.

The man killed by a shark at a Vandenberg Air Force Base beach this morning has been identified as an Orcutt resident.