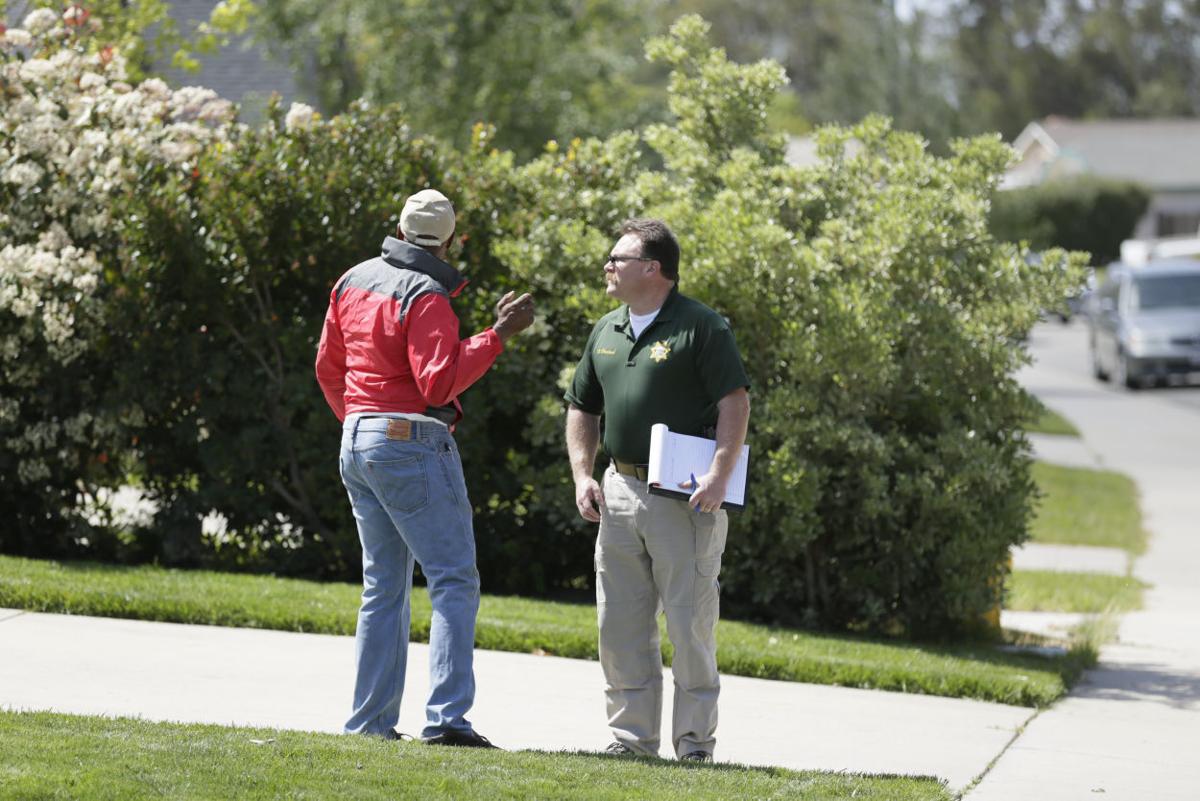 Santa Barbara County Sheriff's Lt. Brian Olmstead, right, talks to a witness in Orcutt, in March 2016. Olmstead believes if legal cannabis is allowed within county borders, additional investigators and staff would be needed for licensing, compliance checks and data analysis. 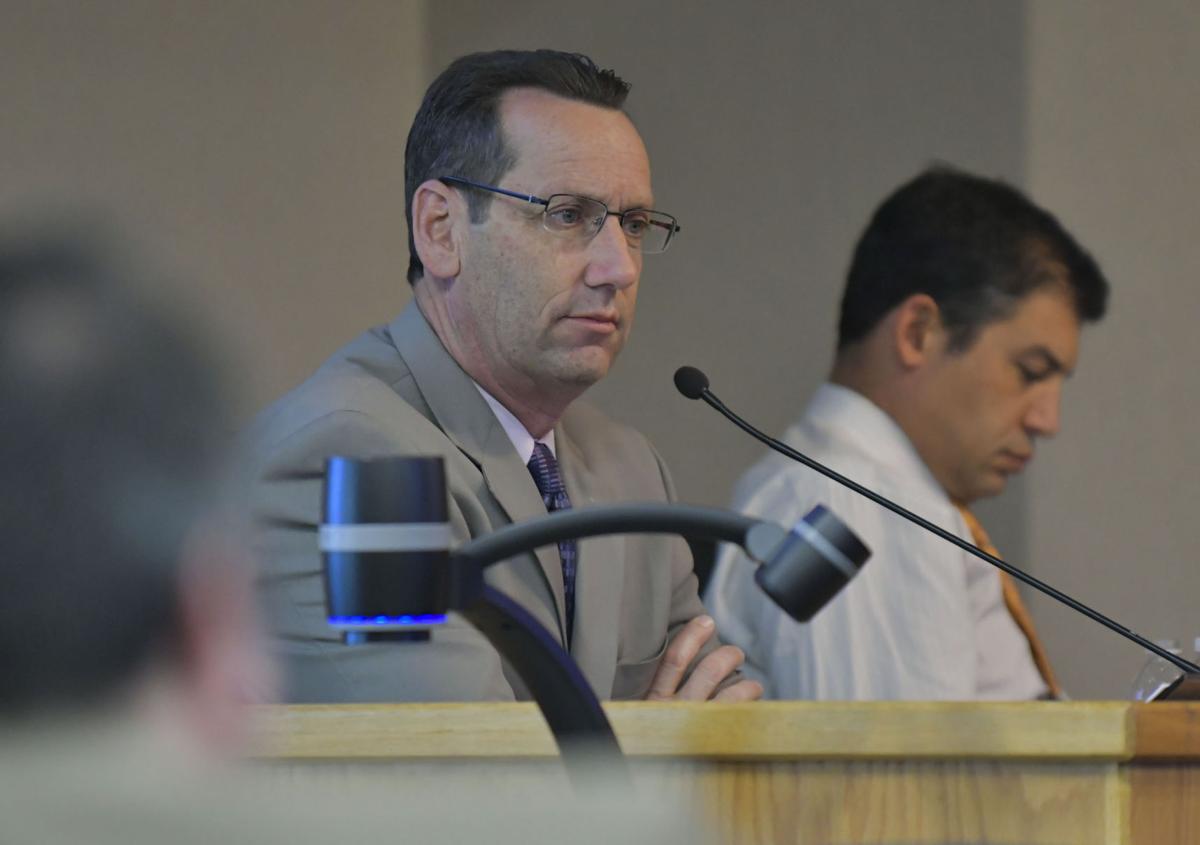 Santa Barbara County supervisors Steve Lavagnino, left, and Das Williams listen to a Dec. 12 discussion on marijuana during a meeting of the Board of Supervisors in Santa Maria.

As county officials grapple with whether or not to allow the cannabis industry to grow on the Central Coast, one key issue is the cost of enforcement.

Initial estimates put the price tag for Santa Barbara County's initial enforcement efforts — licensing, compliance checks, inspections — at more than $2 million in the first year. From there, the cost is expected to grow to more than $3 million per year.

Part of that enforcement effort would require beefing up the sheriff's Narcotics Unit, which could ultimately double that force.

The Sheriff's Office now has five narcotics investigators and one sergeant assigned to its Narcotics Unit, according to sheriff's Lt. Brian Olmstead.

If cannabis is allowed within county borders, six investigators would need to be assigned to licensing, compliance and illegal grows, in addition to a supervising sergeant and two civilian employees to complete data analysis and other needed duties, Olmstead said.

Beyond cannabis investigations, the Narcotics Unit would have to continue its other duties — combating the spread of methamphetamine, heroin and other drugs, assisting in homicide investigations and surveillance, Olmstead said.

County leaders estimate that in addition to adding to Sheriff's Office personnel, they would need to add 14 full-time employees the first year, then an additional 10 employees over the next few years. Those employees would be assigned to various departments associated with regulating the cannabis industry.

If Santa Barbara County leaders agree to allow the cannabis industry to grow, the first step would be expanding the Sheriff's Office, the planning and development divisions, and other offices and facilities. Then, they would have to determine how to fund that expansion.

Deputy County Executive Officer Dennis Bozanich said a majority of the funds needed to support and enforce cannabis laws will have to come from the county's general fund.

"Funding for enforcement activities to reduce the unregulated and illicit cannabis market is largely anticipated to need to come from general county revenues," he explained.

Supervisors are in the process of developing a tax and fee structure for cannabis that could help pay for the expansion of services, with the options including levying gross receipts taxes or an across-the-board percentage tax on cannabis businesses. Voters will have the final say on what a tax structure will look like in a ballot measure to be proposed for either June or November 2018.

If a new tax structure is not created, it could prove devastating to county coffers.

"If a cannabis tax is not placed on the ballot or is defeated by voters, the cost of illegal cannabis enforcement would be competing for general revenues used for many other county programs," Bozanich said.

The county Board of Supervisors could decide that the financial risk may not be worth the reward and bar the industry from doing business in the unincorporated parts of the county. If they take that path, new taxes and a ballot measure would not be needed.

Lee President's Award - Green Rush in the 805?: Cannabis on the Central Coast - Looking at land use, money, science, law enforcement and education

The teenager killed in Friday night's shooting was identified as 16-year-old Pablo Sixto, who was shot shortly before 9 p.m. in the 700 block of North E Street in Lompoc, according to police.

A former flute teacher who taught programs across Southern California, including in the Santa Ynez Valley, pleaded guilty Thursday to a federal child pornography-related charge, according to a U.S. Attorney spokesman.

One person was injured in a shooting near LaSalle and Columbus drives Saturday night, according to a Santa Maria Police spokesman.

A man suspected of stealing a vehicle was arrested in Orcutt on Tuesday after the owner was able to locate the vehicle using a smartphone app, according to a California Highway Patrol spokesman.

For the first time in department history, Santa Maria Police used a drone, or unmanned aerial vehicle, to seek out a suspect hiding in the riverbed over the weekend.

A Santa Barbara County Jail inmate who tested positive for COVID-19 in July, but recovered, was found dead inside his cell on Tuesday, according to a spokeswoman.

Santa Barbara County Sheriff's Lt. Brian Olmstead, right, talks to a witness in Orcutt, in March 2016. Olmstead believes if legal cannabis is allowed within county borders, additional investigators and staff would be needed for licensing, compliance checks and data analysis.

Santa Barbara County supervisors Steve Lavagnino, left, and Das Williams listen to a Dec. 12 discussion on marijuana during a meeting of the Board of Supervisors in Santa Maria.