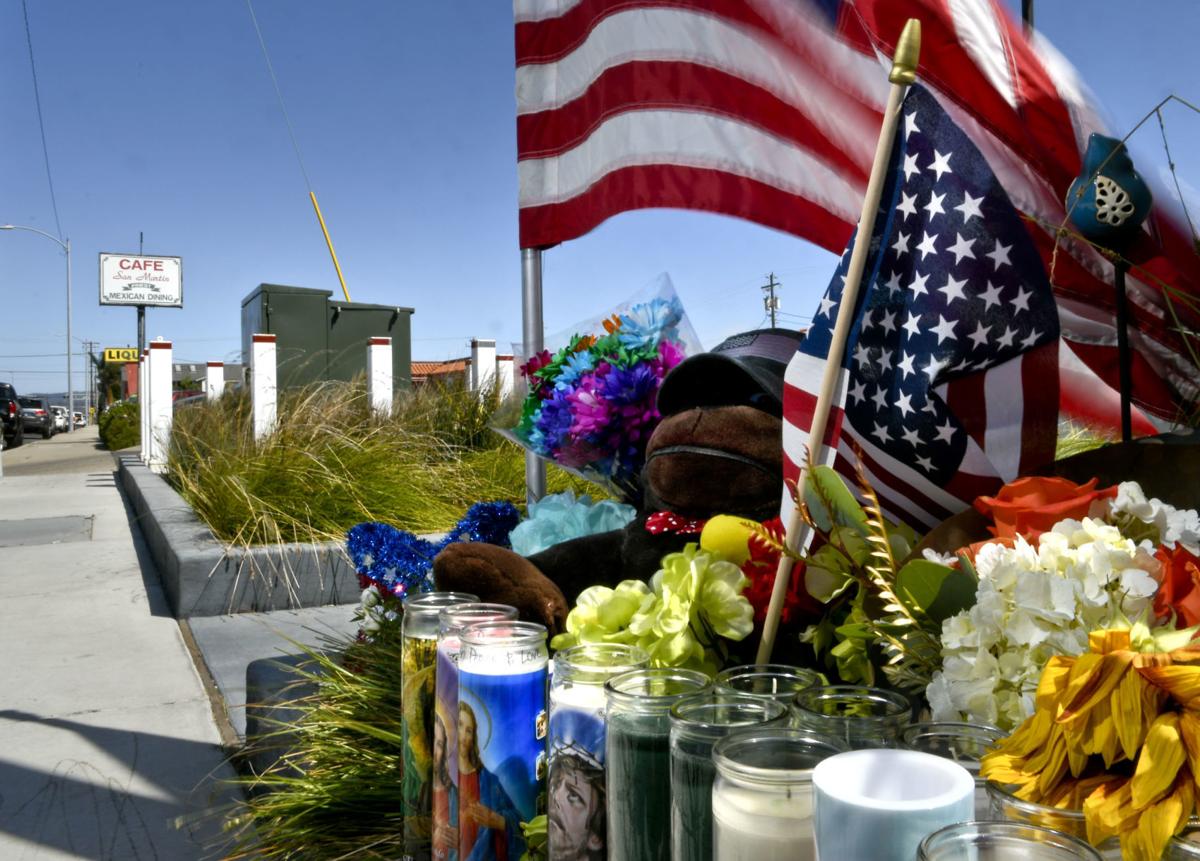 A memorial for Marlon Brumfield, a 22-year-old Army soldier who was killed in Lompoc while on leave from Germany, stands near the intersection of North A Street and East Ocean Avenue on Tuesday. 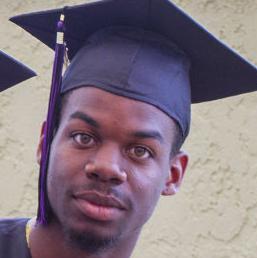 Marlon Brumfield was shot and killed while walking near the intersection of Ocean Avenue and A Street in Lompoc early Sunday morning. He was visiting home while on leave from Germany for the month when he was reportedly shot, according to the Lompoc Police. This is a contributed photo from his graduation from El Puente Community School in 2015. 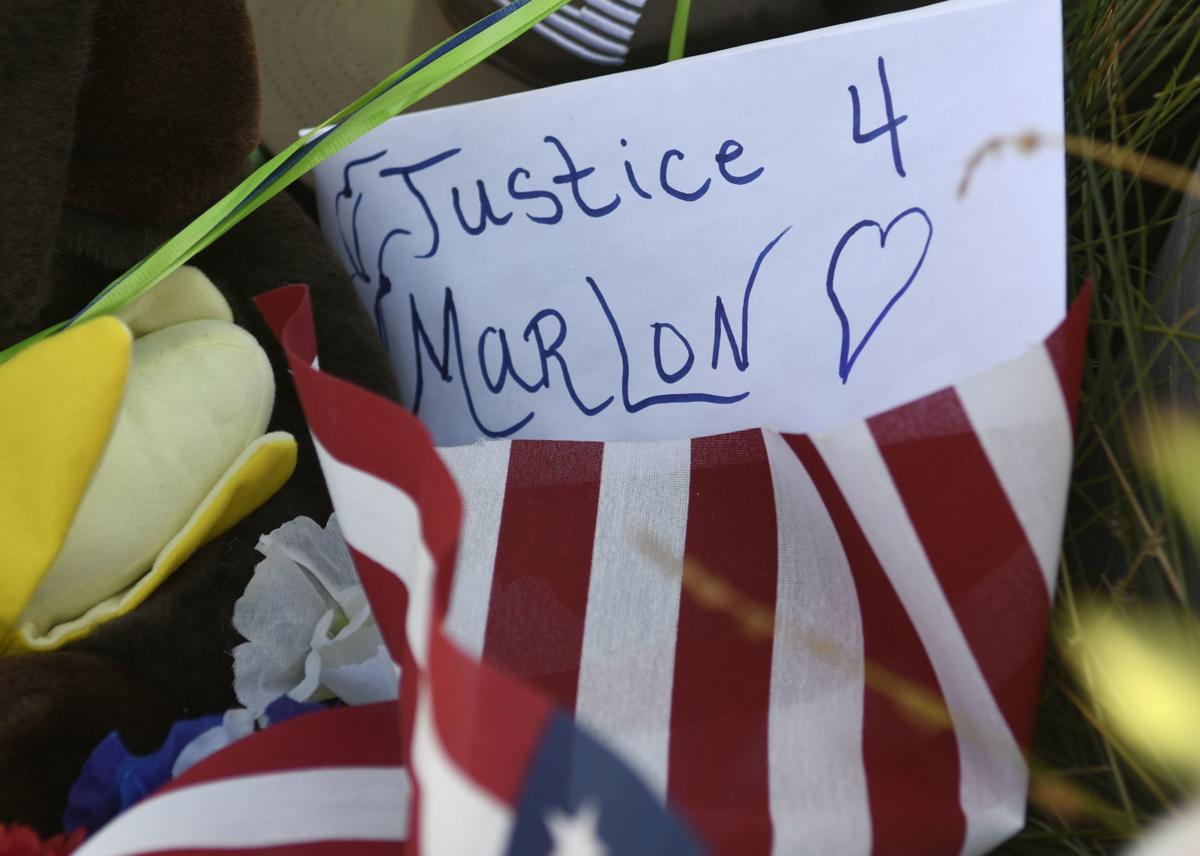 A memorial for Marlon Brumfield, a 22-year-old Army soldier who was killed in Lompoc whileon leave from Germany, stands near the intersection of North A Street and East Ocean Avenue on Tuesday.

A 22-year-old Army soldier was gunned down in Lompoc early Sunday morning, an act that left the community reeling a day later.

Marlon Brumfield was home while on leave from Germany when he was shot and killed just before 2 a.m. Sunday near the intersection of North A Street and East Ocean Avenue. Brumfield was shot multiple times, according to the Lompoc Police Department, and was pronounced dead at the scene.

No suspects had been identified as of Monday evening, according to Lompoc Police.

By Sunday afternoon, a memorial for Brumfield had sprouted up near the scene of the shooting, which marked the sixth homicide this year in Lompoc. That total number of killings is unusually high for the city of 43,000, and Sunday’s latest homicide ushered in online messages of condolences from around the world from those who knew Brumfield, while it also reignited an ongoing conversation about public safety in the city.

A look at the six homicides that have occurred this year in the city of Lompoc:

On Monday, Lompoc Police Chief Joe Mariani expressed sadness over the shooting and said his department was involved in an "active and very aggressive investigation."

"The detectives here are highly committed and they are working above and beyond," Mariani said. "Since early Sunday morning, these guys have probably gotten a couple hours of sleep because they’ve been turning every stone and following every lead."

Lompoc Mayor Jenelle Osborne released a statement Sunday in which she encouraged community members to help identify suspects in the homicide, while also expressing her own concerns about public safety.

“I am deeply saddened by the loss of Marlon Brumfield,” Osborne said. “Marlon’s life impacted Lompoc and the entire country, given his mission to serve. I am very concerned about the rise in crime, and am committed to building a safer Lompoc.

“Marlon’s death must not be in vain but part of the demand for change,” she added. “Public safety will continue to be our city’s top priority. Despite the reduction in staff and resources in the Lompoc Police Department, I am confident Lompoc police will work as hard as ever to solve this heinous act. It is important that we rally together as a community, alongside our police department, to reduce crime.”

More from #Lompoc Police Chief Joe Mariani on public safety in the city, which has experienced 6 homicides so far in 2019. #LompocRecord #SantaMariaTimes pic.twitter.com/f5pC4k69Pi

Meanwhile, social media accounts linked to Brumfield were flooded with messages expressing anguish about his death and offering support to his surviving friends and family.

Brumfield was a graduate of El Puente Community School and went on to attend Hancock College before joining the Army. He had a fiancé and left behind friends across the globe, thanks in large part to his travels with the Army.

Current and former servicemen and women shared memories of Brumfield in many of the online posts, with his sense of humor and ability to make people laugh standing out as a common theme.

Even people who didn’t know Brumfield offered condolences and gratitude for his service.

More from #Lompoc Police Chief Joe Mariani on public safety in the city, which has experienced 6 homicides so far in 2019. #LompocRecord #SantaMariaTimes pic.twitter.com/f5pC4k69Pi

Diane Aro posted on Facebook that she taught Brumfield, his mother and his sister at Hancock College. She called them “wonderful people.”

“It breaks my heart,” she wrote of Brumfield’s death.

Public safety has been a much-discussed topic in Lompoc this year.

Some community members addressed the Lompoc City Council during a March 9 goal-setting workshop to ask that the city do more to provide protection and positive opportunities for youth. Mariani and other city officials have pointed to a lack of funding as a primary cause for the Lompoc Police Department's inability to be proactive in addressing the city's rising crime.

Mariani said Monday that he didn't want to talk about department finances, given the seriousness of Sunday's crime. Still, he acknowledged, as he has in the past, that the Lompoc Police Department cannot afford to do everything it would like. Despite that, he said he was confident his officers would get to the bottom of Brumfield's death.

Lompoc residents Chuck Madsen and Tim Harrington began discussions about 18 months ago on a plan to establish a Lompoc youth center that would empower teenagers and young adults and provide them with a wide range of services and opportunities. After doing much of the early planning themselves, the pair began hosting focus groups last month and are now ready to share their vision for a project that they view as an “investment in Lompoc’s future” and hope to get off the ground early next year.

“I want people to understand that there is no greater priority for a police department to investigate than a homicide or loss of life," the chief said. "That takes priority over everything. Despite what people may want to believe or think, the Lompoc Police Department has not fallen short in its responsibility to investigate those cases.”

There had been some speculation online that there was a racial element to the killing of Brumfield, who was black. Mariani said he had no evidence of that being the case.

In defending his department, Mariani noted that four of the six homicides this year have resulted in suspects being arrested. The two still-unsolved cases are the July 1 death of 25-year-old De'Andre LeJames Valrie, who was also gunned down, and Brumfield.

Mariani said he was confident those cases would be solved in the very near future, possibly “within the next few days.”

He added that his officers have the same concerns as many others in the community.

“I have employees that knew this young man, who grew up with him, so it’s had an effect on them, too," he said. "We’re not removed from this community; we’re a part of this community.”

Anyone with information about Sunday’s shooting is encouraged by police to contact the Lompoc Police Department at 805-736-2341 or to submit tips through the LPD’s mobile app. Tips can be made anonymously.

#Lompoc Police Chief Joe Mariani discusses yesterday's killing of a 22-year-old Army soldier in the city. He stressed that his dept will get to bottom of crime. #LompocRecord #SantaMariaTimes pic.twitter.com/aGEnC98Elj

Ink for a cause: Lompoc tattoo shop to host fundraiser for police department

Fortified Tattoo Co., 135 North H St., will host a fundraiser Friday to benefit the Lompoc Police Department. The event is being held in response to Lompoc's rising crime rate.

A memorial for Marlon Brumfield, a 22-year-old Army soldier who was killed in Lompoc while on leave from Germany, stands near the intersection of North A Street and East Ocean Avenue on Tuesday.

Marlon Brumfield was shot and killed while walking near the intersection of Ocean Avenue and A Street in Lompoc early Sunday morning. He was visiting home while on leave from Germany for the month when he was reportedly shot, according to the Lompoc Police. This is a contributed photo from his graduation from El Puente Community School in 2015.

A memorial for Marlon Brumfield, a 22-year-old Army soldier who was killed in Lompoc whileon leave from Germany, stands near the intersection of North A Street and East Ocean Avenue on Tuesday.