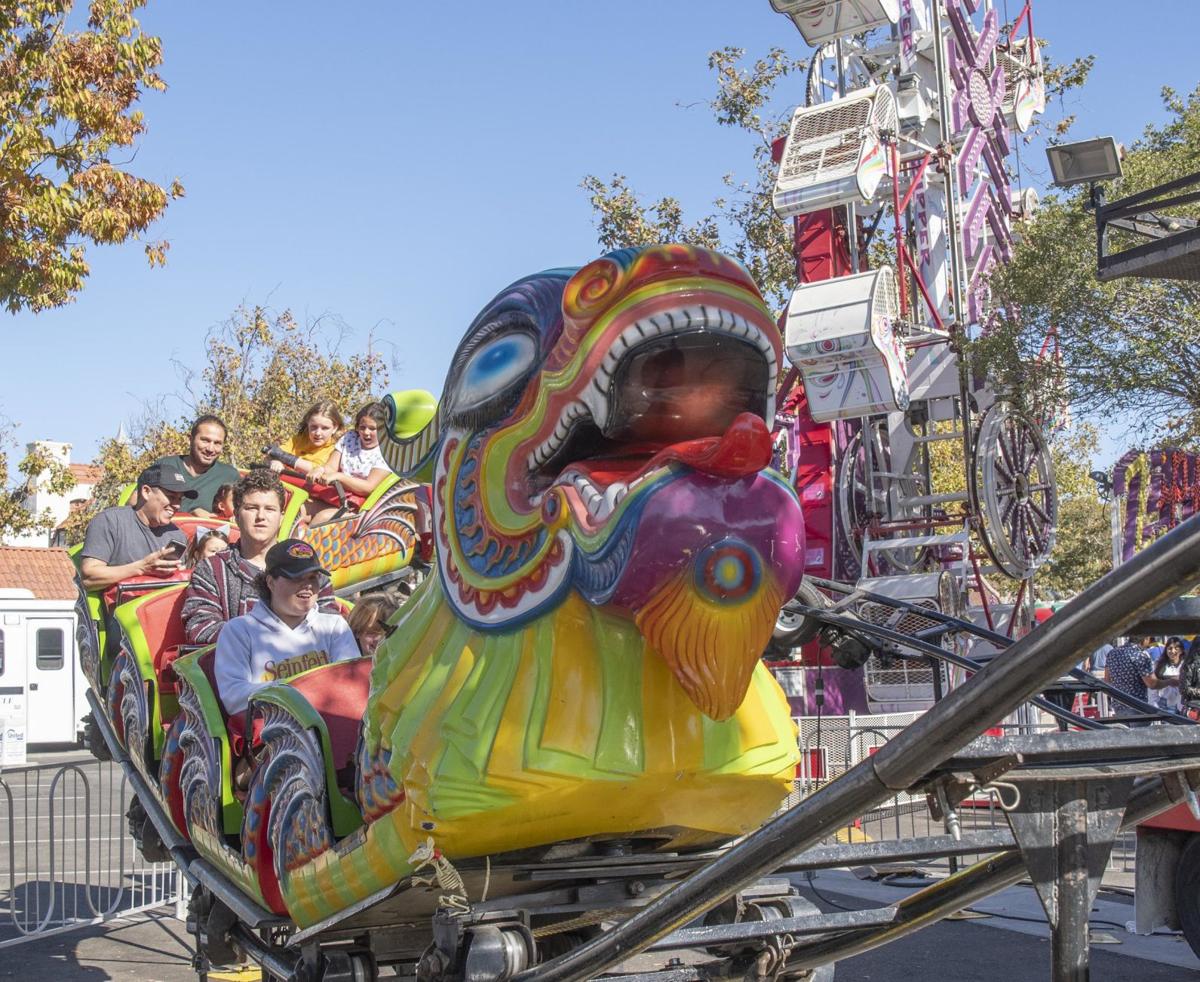 Riders of all ages ride on the Express at the carnival during the Solvang Fall Festival Saturday. 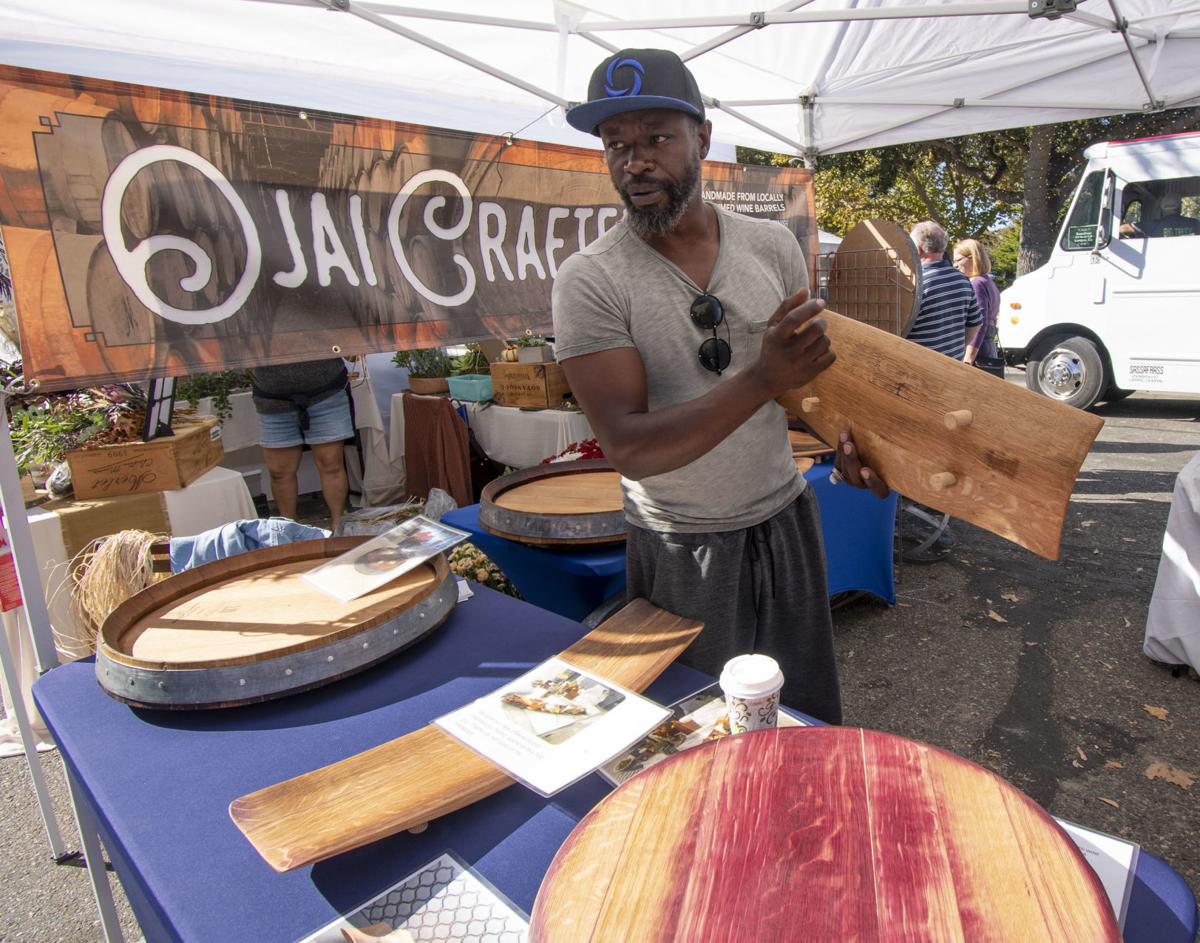 Vendor Obadiah Wakabe, of Ojai, shows a customer an oak cheese board at his booth at the Solvang Fall Festival Saturday.

While the city of Solvang is touting the inaugural three-day Fall Fest as a resounding success, merchants are reporting mixed reviews.

The event drew a reported 15,000 people to downtown Solvang with carnival rides, live music and a variety of vendors, but several businesses say it was not beneficial to the village. One closed its doors early due to lack of business.

“This carnival was not the type of activity that belongs in Solvang. There’s no need. We had customers so angry, people who come in all the time, that they couldn’t find parking, couldn’t get to the store easily, that it was so very loud. They couldn’t believe the city would allow something like this,” said Julie Palladino of Renaissance Antiques on Copenhagen Drive.

The street was shut down to vehicle traffic for five days for the festival, which drew locals and tourists alike Nov. 15-17. Festival preparation began two days before the event with the installation of booths and barricades effectively shutting down local traffic.

“I see that people were so excited about it and that brings me joy, but it would have been so much nicer if my customers could have come into town if they wanted to. I don’t know what the answer is. I just know that I can’t sustain my business and won’t sustain my business if I have to constantly have the front of my store shut down. It’ll be ‘bye-bye jeweler,’” said Ginger Cleland, owner and buyer for Designs in Gold.

On Friday and Saturday of Fall Fest weekend, Cleland said she took in only 16 percent of receipts compared to the same period in 2018. Palladino’s business was reportedly down 82 percent year over year.

“Not only did the barricades keep people from having free access to our stores, the noise level was intolerable. It was basically disturbing the peace. That’s not what this town is about,” Palladino said.

But the weekend worked out for Cecco’s on First Street.

“I was pessimistic going into the weekend, and Friday night I wasn’t doing any business,” said owner David Cecchini.

Then the carnival really got going, he pulled his pizza oven and some of his staff out to a vendor booth, and business took off.

There was no shortage of amusement rides, games, cotton candy and smiling faces in downtown Solvang Sunday, as the carnival-themed Solvang Fal…

“It worked out really well because the energy was really good. We had a lot of business, all locals and regular customers and families. We did three times as much business on Saturday as we normally do and twice again as much on Sunday. For me, it worked out. I can’t speak for everyone,” he said.

Mayor Ryan Toussaint said the event was embraced by the community with multi-generational families sharing space with local businesses and carnival rides. He noted that, as a first-year event, it could certainly use some reworking in the future as could any new event.

“Not every event is for everyone. One of the really important take aways here is that there were so many families out from the Santa Ynez Valley, people who don’t come out for the events that are designed more to pull in tourism,” Toussaint said. “Historically, when the downtown is all about tourism, it alienates the locals about downtown. This festival is about a different way of thinking, about reacquainting the locals with the downtown, about inviting them back in. It’s important to involve the local community.”

For some businesses such as First Street Leather, the weekend was a financial wash.

“I’m sure there’s mixed reviews. We looked at our numbers between this year and last and they’re about the same. There was no monetary change in business, so Fall Fest didn’t hinder us but neither did it overly help us. The only thing I wish they would have done is let us retailers know well in advance so we could have staffed up and warned our regular customers about parking,” said First Street Leather General Manager Travis Mueller.

Merchants said the single lost weekend isn’t the only issue, however. The street closures have been repeated as the city focuses on larger events.

“This is the third event in about six weeks where they’ve barricaded our street,” Palladino said, referring to closures for Gran Forno, Stomp and Fall Fest.

While merchants had mixed reviews of the event itself, those contacted were unanimous on several points including: the number of street closures that affect their business; a need to be included in pre-event notification of any closures; an interest in attending merchant meetings prior to said events; and the adverse impact on parking during street-closure events.

“I understand the city is ever changing and looking for how best to promote Solvang. I get that. I wouldn’t have made it here 30 years if I didn’t understand that. But to keep a brick-and mortar business open is difficult because there’s so much offered online now. As a city, if we want to keep local merchants, if we want to try to keep the world of brick-and-mortar alive, we have to be considerate of them,” Cleland said.

Ron and Julie Palladino: Fall Festival a net-minus for Solvang

Solvang, its City Council members and various entities who are responsible for the Fall Festival this past week appear to have lost sight of t…

In an effort to breathe new life into a Solvang tradition, attract visitors and shoppers and put the city firmly on the holiday tourism map, Solvang City Council on Monday enthusiastically threw its support — and up to $110,000 — behind bringing a lighted drone show and light show to Julefest.

A Lompoc man on Thursday pleaded not guilty to felony charges related to the gang-related shooting death of a U.S. Army soldier in September 2019, following at least two delayed appearances due to quarantine.

Riders of all ages ride on the Express at the carnival during the Solvang Fall Festival Saturday.

Vendor Obadiah Wakabe, of Ojai, shows a customer an oak cheese board at his booth at the Solvang Fall Festival Saturday.