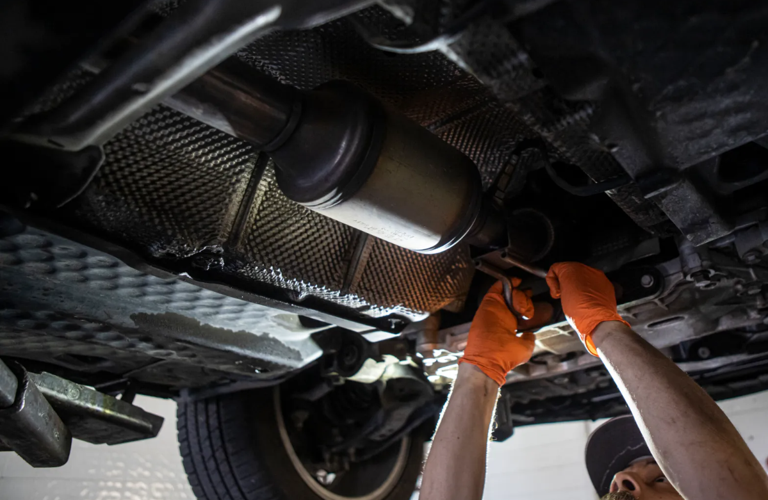 Mechanic Alex Esparza works on a catalytic converter of a vehicle at Van Ness Auto Repair in Fresno on Sept. 13, 2022. 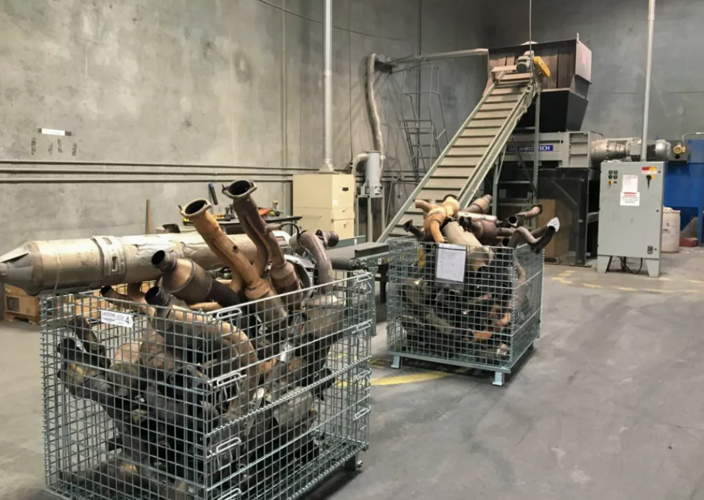 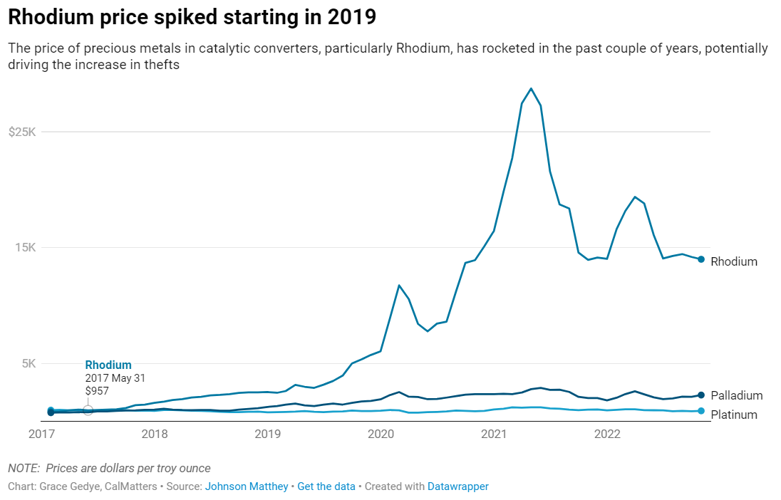 The value of the precious metals in converters, particularly rhodium, has skyrocketed since late 2019. Rhodium is currently valued about eight times the price of gold.

A beam of light glints beneath Isaac Agyeman’s 2009 Prius, parked outside his Temecula home early one August morning.  One person is under the hatchback, another by its side and a third is stationed nearby. After a few mechanical roars and a quick scoot out from under the car, all three hurry away.

It was the second time Agyeman’s catalytic converter — which scrubs a car’s emissions to make them less toxic and contains precious metals —  had been stolen. This time, he caught the whole thing on camera.

“I was upset. I was really frustrated,” he said. He filed a police report, sent them the footage and called his insurance company. On top of everything, it was his birthday.

Agyeman paid $500 for the repair and his insurance covered the rest. He forked over another $150 to get a protective gate installed over his converter, hoping to deter future would-be thieves, and between $6,000 to $8,000 on an upgraded home security system, he estimates. As of September, he still hadn’t heard anything from the police, he said.

Catalytic converter theft has spiked across the country in recent years, from 1,298 reported thefts in 2018 to 52,206 in 2021, according to claims data from the National Insurance Crime Bureau. The bureau sampled member company claims data to identify catalytic converter theft trends, and a spokesperson wrote in a statement that the numbers don’t represent all thefts.

Nationally, 37% of catalytic converter theft claims tracked by the bureau in 2021 were in the Golden State — a disproportionate share, even accounting for California’s large population.

About 1,600 are stolen per month in California, per a 2021 presentation from the state’s Bureau of Automotive Repair. Hondas and Toyotas, particularly older Priuses, are most often targeted, according to claims data provided by the AAA Automobile Club of Southern California. Hybrids have two converters and the parts tend to get less wear, making them more valuable, according to the National Insurance Crime Bureau. Thieves sell the converters, which can be removed in minutes with an electric saw, for $50 to $250, the bureau wrote in a statement.

Folks all over the state have suffered.

This summer, police recovered 112 converters and arrested 28 people in the Inland Empire. In September, four marked San Francisco Police Department vehicles were relieved of their converters.

In April, staff at Yolo Food Bank in Woodland realized a catalytic converter had been stolen from a Prius they use to make small deliveries. Staff used their own cars to drop off food while the Prius was out of commission, said Maria Segoviano, director of marketing communications at the food bank.

The organization paid about $400 for a shield to protect the converter and began parking the car inside its warehouse. And, because this wasn’t the first time they’d had someone break through a wire fence to get to their parking lot, they decided to invest in an heavy-duty, 8-foot fence.

“Catalytic converters obviously have been around forever, and they’ve been getting stolen forever, but never this bad,” said Jared Cabrera, a service writer at Art’s Automotive in Berkeley.

Before the pandemic, it was almost unheard of, he said. Now he estimates he sees four or five cars a week that have had their converters stolen.

The value of the precious metals in converters, particularly rhodium, has skyrocketed since late 2019, potentially driving the surge in theft. Rhodium is currently valued around $14,000 per troy ounce, about eight times the current price of gold.

“It's so incredibly difficult to investigate these cases, to charge them, and to hold anybody accountable,” said Tamar Tokat, a Los Angeles County deputy district attorney.

It’s rare that people are caught by police while they’re taking the converter, since it happens so quickly. And if law enforcement finds someone with hundreds of converters, it might be suspicious but, said Tokat, because converters are unmarked, they can't be traced back to a particular car.

“How can we disprove a claim that it came from a junkyard, or disprove a claim that they [were] given it by some other auto mechanic?” said Greg Totten, CEO of the California District Attorneys Association. It’s very difficult under those circumstances to prove to a jury of 12 — beyond a reasonable doubt — that it was stolen, he said.

Lawmakers across the country have scrambled to curb the catalytic converter crime spree.

States have passed at least 37 laws, according to Essex. But the laws are so recent there’s little evidence yet which, if any, are effective.

California lawmakers also produced their own pile of 11 bills this most recent session. Many died early, but four wound their way through several layers of committees and votes. They are:

The first three bills were signed into law while the fourth failed to pass a late August vote in the Assembly. That bill was sponsored by the Los Angeles district attorney’s office and was aimed at making it easier for law enforcement to investigate and prosecute catalytic converter theft.

Car dealers, who would have been tasked with etching numbers onto converters, opposed the bill. They didn’t think it would deter theft, said Brian Maas, president of the California New Car Dealers Association, and they thought it could be expensive. For cars where the catalytic converter is easy to get to, it wouldn’t take much time, he said. But for others — say, a car that has a converter attached to its engine block — the etching could cost hundreds or thousands of dollars, Maas said.

Legislators amended the bill so that it didn’t require VIN numbers if the converter wasn’t “readily accessible” and marking it “would reasonably require the significant removal or disassembly of parts of the vehicle.” But Maas said that standard wasn’t sufficiently defined, and was worried the ambiguity would lead to lawsuits against dealerships. “I can't tell you today what ‘significant disassembly’ means. I don't know which car that applies to,” Maas said.

“We're concerned that our dealers are going to be held responsible for not marking a catalytic converter that ultimately might have been stolen,” he said.

The bill’s author, democratic state Senator Tom Umberg from Garden Grove, said he was “honestly shocked,” in a statement after the bill’s failure.

“I’m not surprised that the auto dealers and car manufacturers would be reluctant to take on this task to support their customers — we engaged in multiple conversations with them in the last seven months.  Frankly, I’m more surprised that the majority of the California State Assembly chose the concerns of the car dealers over the cries of help from their constituents.”

Tokat, with the Los Angeles County district attorney’s office, thinks the two laws regulating the sale of converters will be less effective without the VIN etching bill. “We've already had record-keeping laws on the books for many years now and they've really been ineffective,” she said.

Still, others see the new laws as a step in the right direction. They won’t completely “wipe out” the issue, said Amanda Gualderama, a legislative advocate with AAA. But the bill limiting who can legally sell converters, SB 1087, closes loopholes in existing laws, she said.

Will Congress step in?

Congress could also mandate that VIN numbers be etched onto converters. Under federal law, cars are already required to label several other parts, including the engine. A bill in congress would add catalytic converters to the list and create a grant program to help pay for marking existing vehicles.

“I kind of think it's appalling that the manufacturers don't just voluntarily put the VINs on the catalytic converters because they know they're a huge target,” said Rosemary Shahan, president of Consumers for Auto Reliability and Safety, a consumer advocacy non-profit.

CalMatters reached out to Ford, Toyota, and Honda. Ford didn’t respond to CalMatters’ questions. Toyota also didn’t answer CalMatters’ questions, but a spokesperson said in a statement, “Catalytic converter theft is an industry wide challenge … the most effective approach requires close collaboration between the broader automotive industry and local and state authorities to devise legislative solutions aimed at eliminating the market for these stolen parts.”

Honda, which didn’t answer questions, directed CalMatters to the Alliance for Automotive Innovation, an advocacy group for car manufacturers.

The Alliance did not make anyone available for an interview but said, via a statement, “Catalytic converter theft is a major problem in California and across the country… We are working closely with policymakers and law enforcement authorities on how legislation or other efforts, including increasing public awareness and enhanced penalties for unlawful possession, can help deter this kind of criminal activity.”

What’s a car owner to do?

There are steps motorists can take to reduce the odds their converter gets stolen, according to the Bureau of Automotive Repair. Parking on a well-lit street — or in a garage if you have one — helps. You can adjust your car’s alarm, to make it more likely to go off if someone tries to get under the vehicle. And there’s a whole niche market of shields, clamps, protective plates and cages that can be installed to protect converters.

But not everyone can park on a well-lit street or in a garage, and gadgets don’t guarantee protection. Cabrera, at Art’s Automotive, says he’s seen cars with theft deterrent devices still wind up with their converters stolen.

For one driver, though, a converter shield has provided security — at least so far. Greg Feldmeth, a retired teacher in Altadena, had his catalytic converter stolen four times beginning in 2020. When he got a Prius years ago, he was happy with the car and its great gas mileage.

“Since then, I've wondered if it was the right choice,” he said. He’s become familiar with the “horrible” noise his Prius makes when it no longer has a converter.

After the part was stolen for a fourth time in October 2021, Feldmeth had a protective shield installed. His converter has stayed put since.

This article was originally published by CalMatters.  You can read more of their coverage of California state government on CalMatters.org.

Is California’s beleaguered jobless benefits agency ready for a recession?

California’s Employment Development Department struggled to keep up with the demands of the pandemic. But a potential recession isn’t likely to be as intense, and the department has made several changes that could smooth the process of getting benefits.