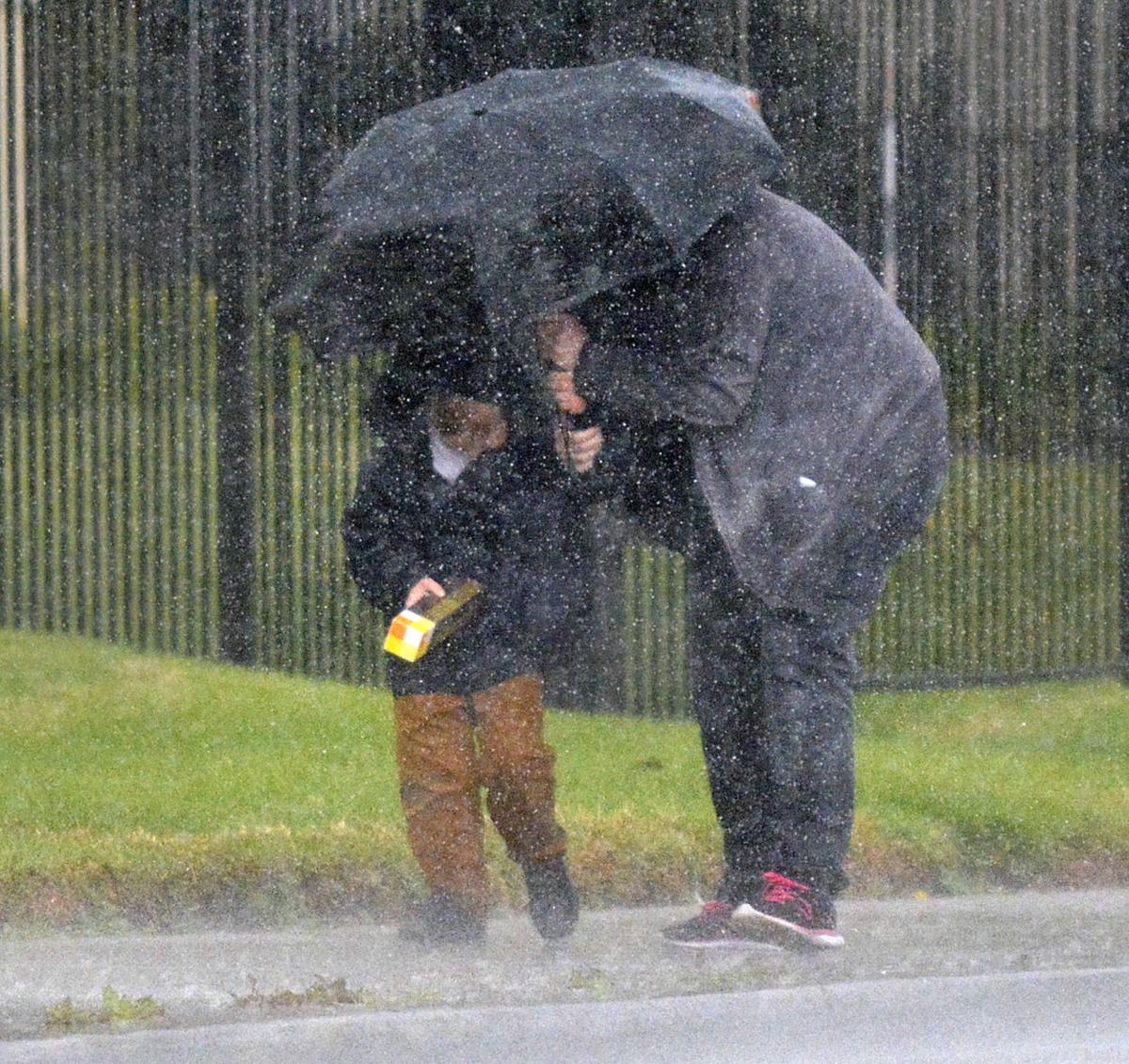 A woman and child huddle under an umbrella in heavy rain Monday afternoon on West Pine Avenue in Lompoc. 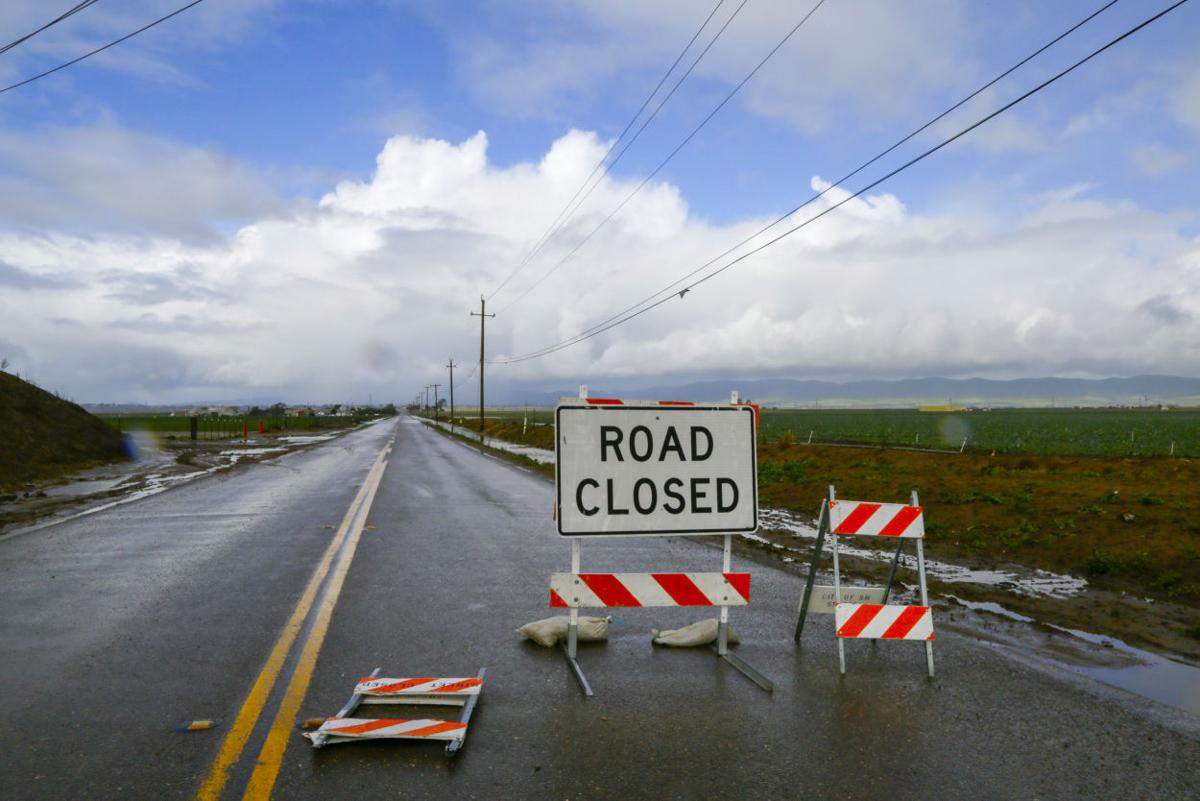 Black Road, north of Stowell Road and west of Santa Maria, was closed for a time Monday due to flooding. The barricades were removed shortly after 3 p.m. 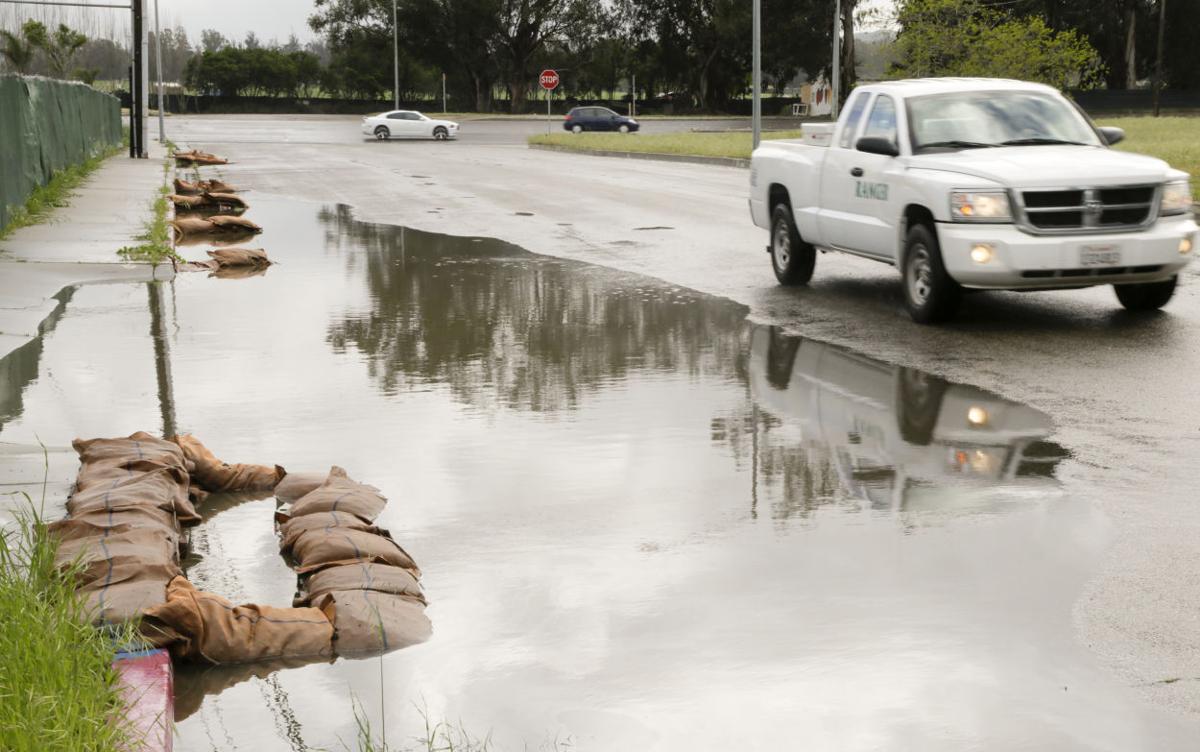 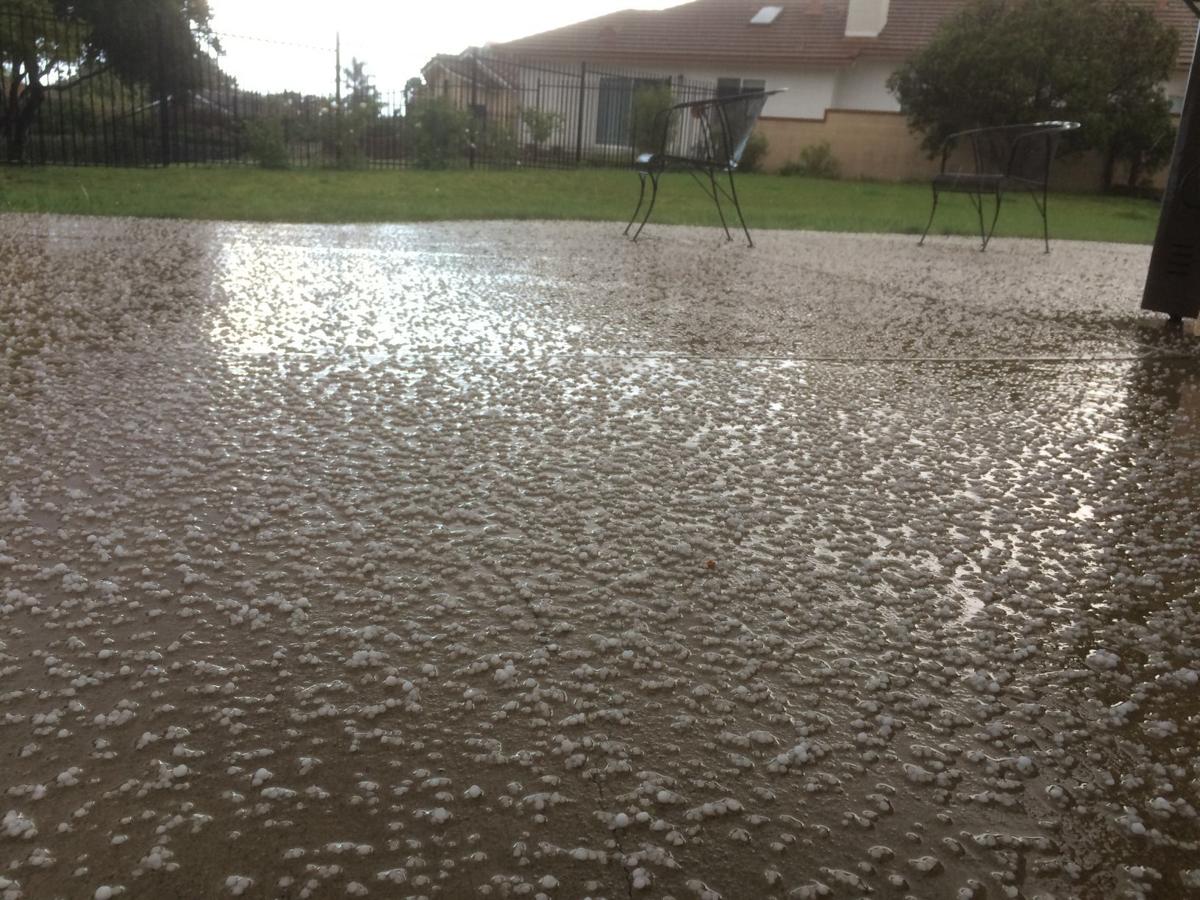 Hail from a storm Monday morning covers the backyard of a home in Lompoc. 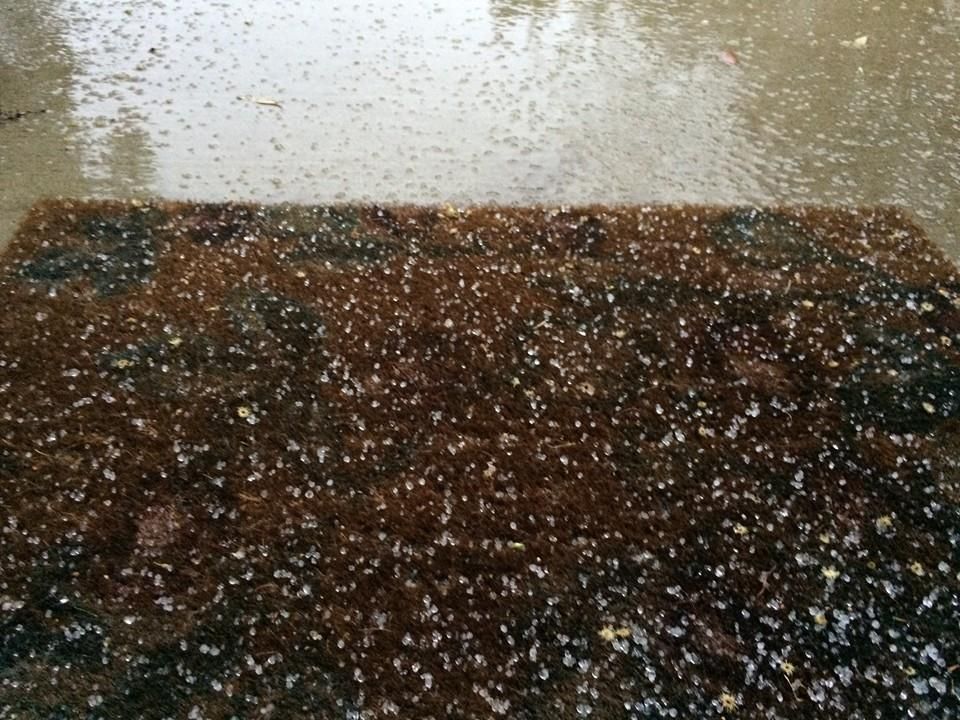 A storm system carrying strong winds and showers moved through the Central Coast on Monday, causing flooding and minor damage.

“We had a cold front move through late last night to early this morning, and that brought a line of heavy rain with some thunderstorms through the area, with gusty winds along, ahead of and behind the front,” said meteorologist Robbie Munroe of the National Weather Service.

“(That’s) moderately strong for Santa Maria, because they’re somewhat protected by the winds from the hills and the mountains in that area,” Munroe said.

The combination of wind and rain was enough to knock down trees and cause flooding around town.

“The wind is what causes the trees to go down,” said Steve Kahn, Santa Maria’s Public Works director. “You have super saturation of soil from the rain, and then wind uproots them.”

Four trees fell throughout the city over the weekend, and the intersection of Black and Stowell roads was closed down Monday due to flooding. However, Kahn said the damage was otherwise minimal.

Luckily, Kahn said, his department has mastered the preparation required to respond to big storms.

“We have gotten so prepared for these storms that we don’t have to do special preparation,” Kahn said. “The rain vehicles are prepared to go out and do things like close streets and unclog drains.”

“We were getting hail, lightning, thunder, pretty much anything you can think of,” he said.

At about 2 a.m. Monday, Tamayo got a call from one of his newspaper carriers who was trapped on Tepusquet Road after a tree went down and flooding and thick mud made it impossible for the car to exit the area.

“It was flooded all over,” Tamayo said. “It was really bad on Santa Maria Mesa Road between Sisquoc and Tepusquet.”

Other parts of the county also experienced flooding, including Highway 101 at the Casitas Pass Road offramp, Munroe said.

The types of weather conditions found throughout the Central Coast are not necessarily uncommon with that type of storm system, Munroe said.

“It certainly doesn’t happen every time, but it’s not unusual either,” he said.

Lompoc had reports of only a few broken tree limbs, including one that broke a vehicle's windshield off Chestnut Avenue, according to the city’s Urban Forestry Supervisor Codie Blea.

“With winds that strong, you shouldn’t park under a tree,” Blea said. “That’s a recipe for damage.”

Things were mostly quiet in Solvang as well, as no significant damage was reported, according to the city’s public works director, Matt van der Linden.

And that’s normal, he said, adding that damages are not typically reported during the first storm but rather during subsequent storms, when the ground is more saturated.

In Buellton, there were no damage reports; however, Jonata Park Road had mud and silt wash over from the farm uphill, according to that city’s public works director, Rose Hess.

“We ask everyone to keep checking their property drains to ensure it is clear of debris (and) leaves to make sure water can flow where it is supposed to,” Hess said. “Also, make sure to turn your irrigation off.”

As of 5 p.m. Monday, the Central Coast had at least 1 inch of rain in the past 24 hours, according to Santa Barbara County’s Public Works Department.

Lompoc got 0.85 inches, while Vandenberg Village got 1.15 inches.

Santa Ynez had the most rain in the valley, getting 1.20 inches, followed by Los Olivos at 1.18 inches. Buellton got 1.08 inches while Solvang saw 1.06 inches.

Overall, the rain put a dent in Santa Barbara County’s rainfall percentage, currently estimated at 71 percent. The percentage means that the average winter normally has had more precipitation than what the county has experienced so far.

But more rain is around the corner, Munroe said.

“We have another possible storm system working its way into the area either late Thursday or early Friday, with showers possible through the weekend,” Munroe said. “It’s kind off and on at this point.”

Whether the new storm system mimics the one just experienced is still unknown, Munroe said.

“It’s too early to tell exactly what kind of impact it will have,” he said. “The models aren’t in complete agreement given that it’s that far out.”

Munroe did warn that a high-surf warning remains in effect until noon Tuesday.

“With the larger waves and the high water, give the ocean a little more respect and always keep an eye on it,” Munroe. “With the rogue or sneaker waves, they can occasionally pull someone in.”

A woman and child huddle under an umbrella in heavy rain Monday afternoon on West Pine Avenue in Lompoc.

Black Road, north of Stowell Road and west of Santa Maria, was closed for a time Monday due to flooding. The barricades were removed shortly after 3 p.m.

Hail from a storm Monday morning covers the backyard of a home in Lompoc.