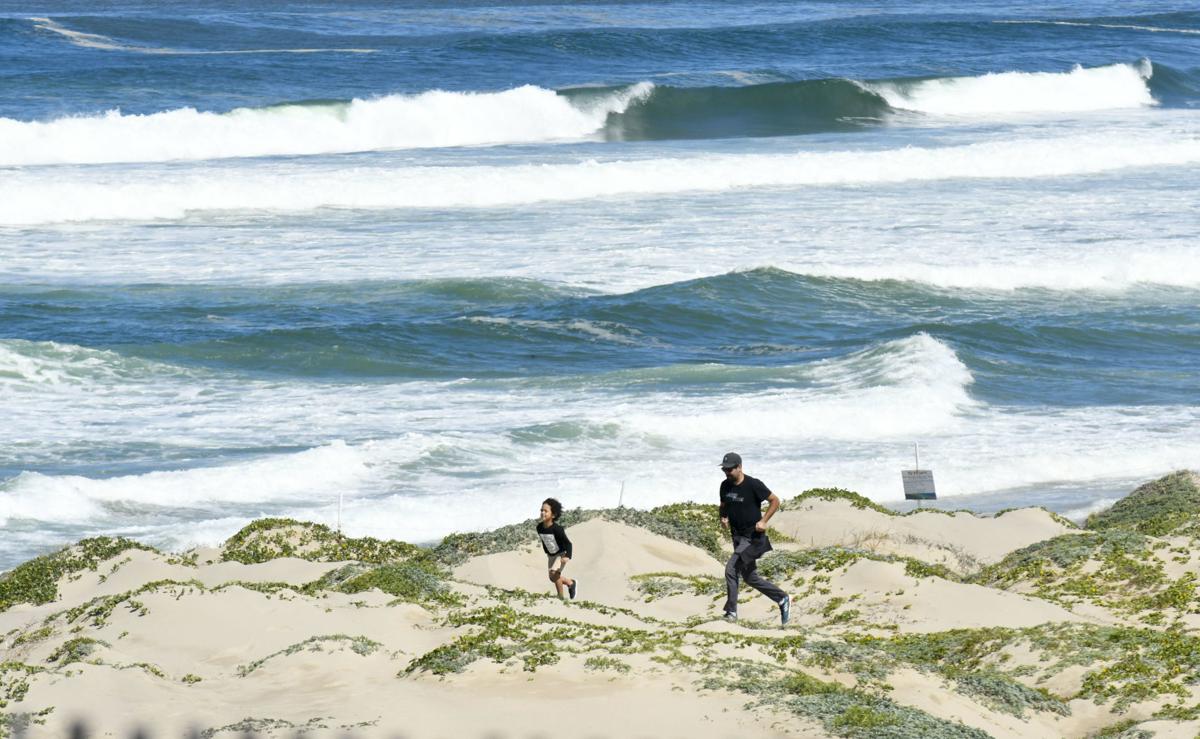 A man and child run in the dunes at Surf Beach, west of Lompoc, on Tuesday morning. 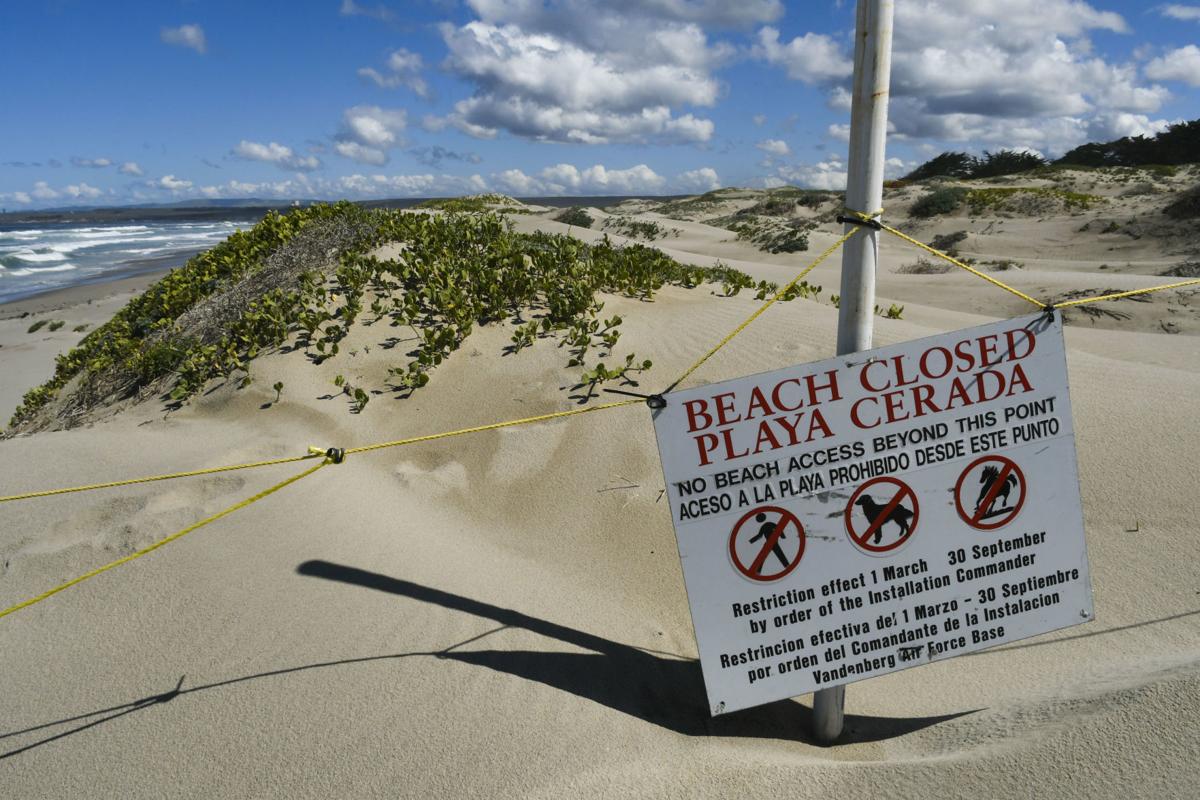 A sign and roped area closes part of Surf Beach, north of the parking lot, on Tuesday morning. An area south of the signs is open. 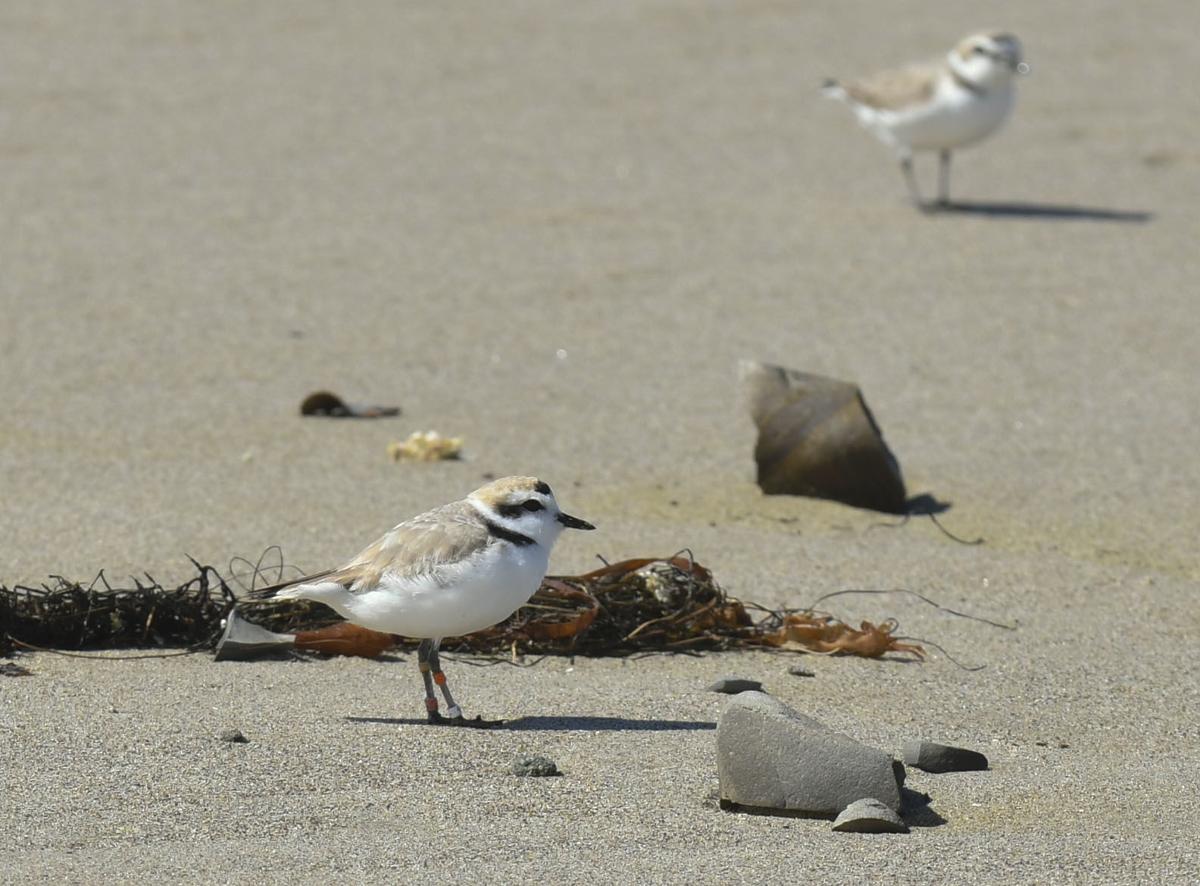 Western snowy plovers stand outside the reach of the waves at Surf Beach, west of Lompoc, on Tuesday morning. 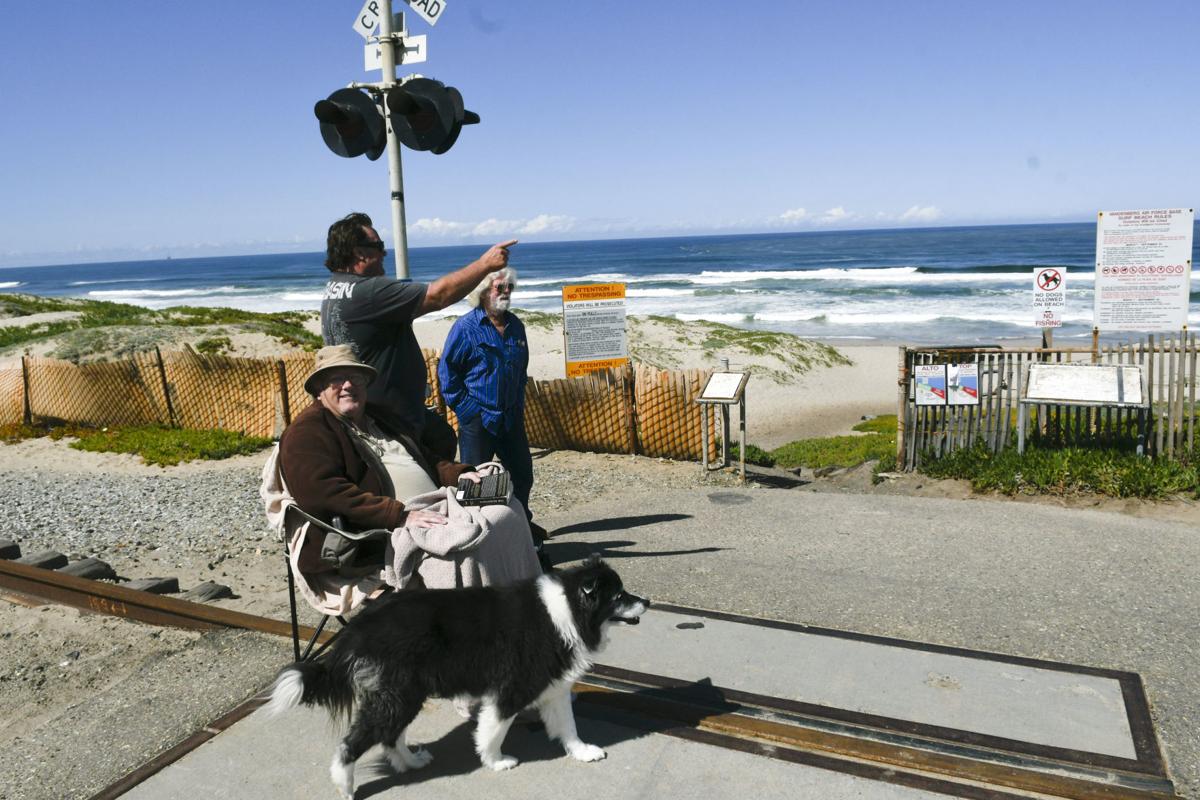 Visitors to Surf Beach watch the waves near the train tracks Tuesday morning. 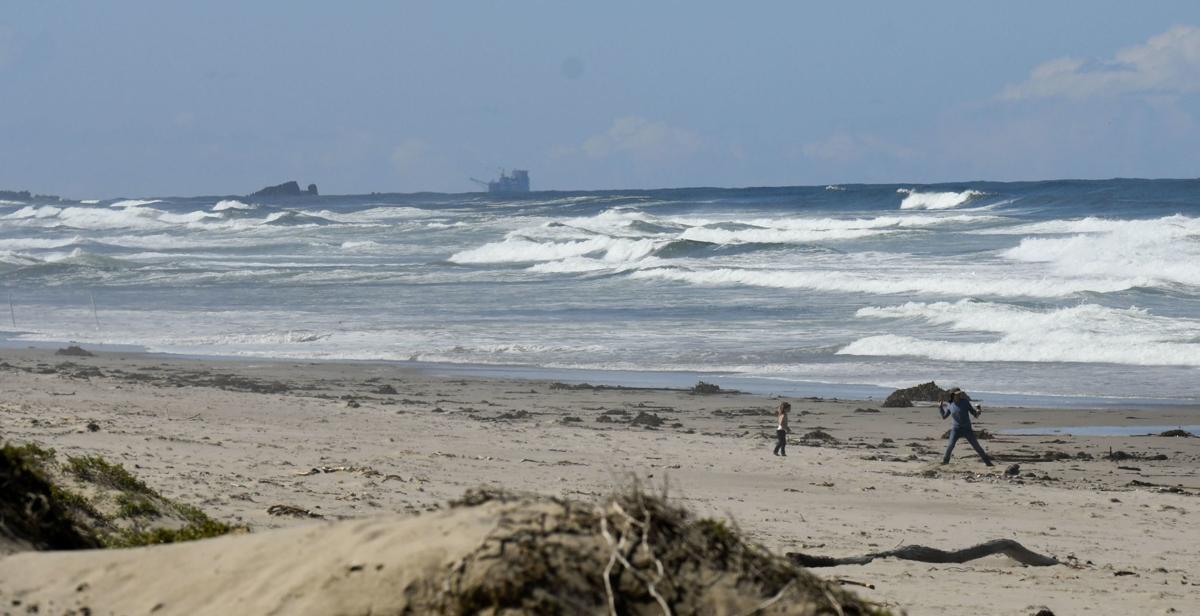 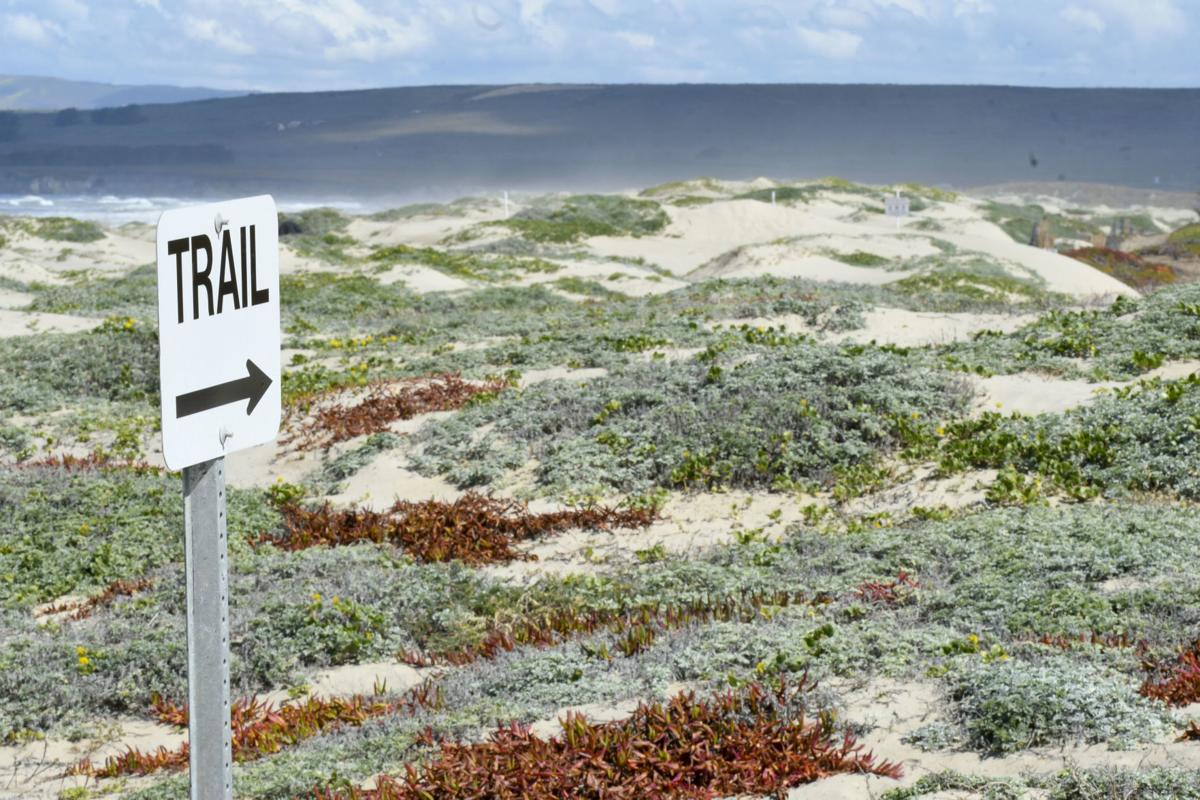 A trail parallel to the railroad tracks allows access from Surf Beach to Ocean Beach Park. 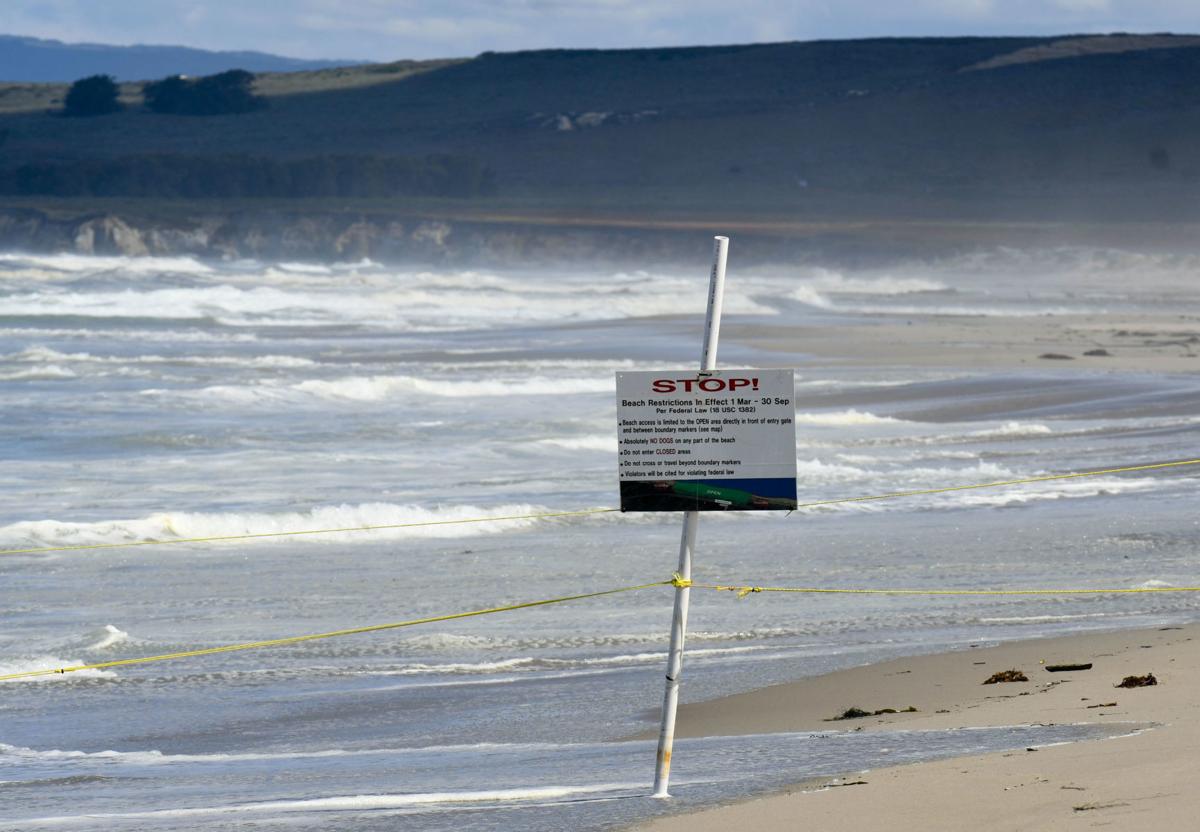 The Santa Ynez River breaks through the sand at Ocean Beach Park to reach the Pacific Ocean on Tuesday morning. 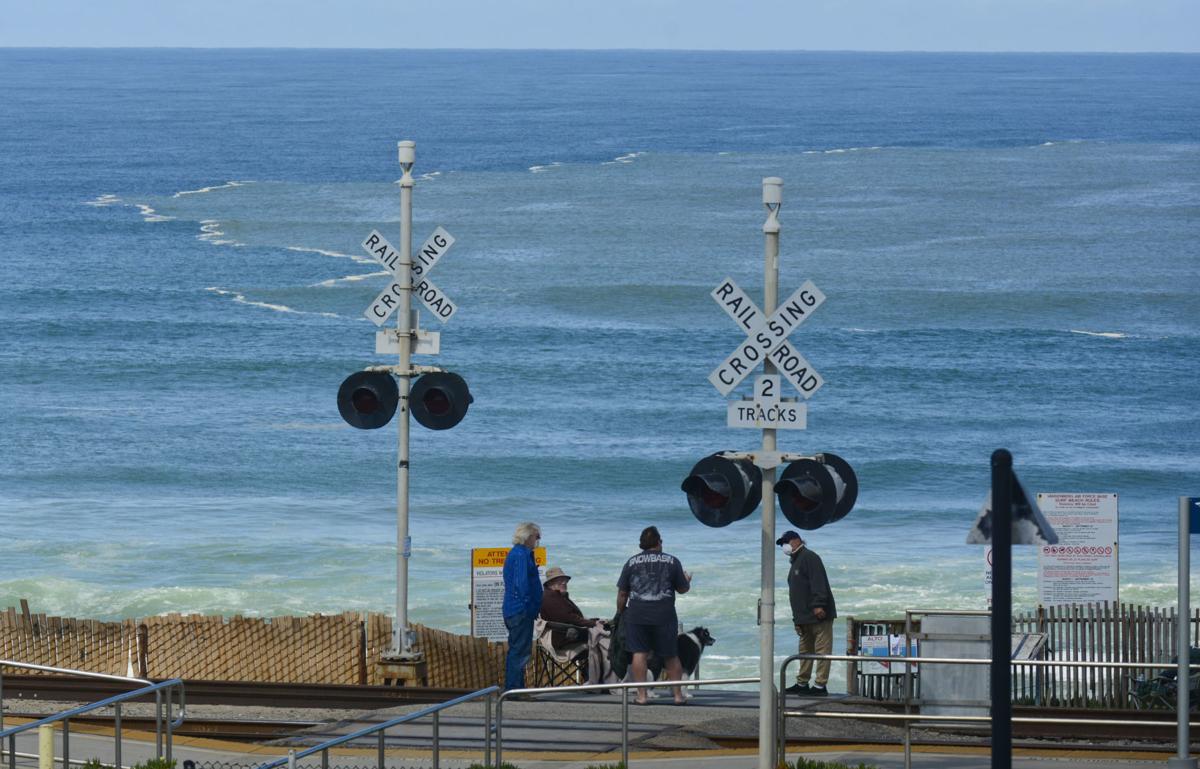 Runoff from the Santa Ynez River has a different color than the Pacific Ocean, after the fresh water broke through the sand at Ocean Beach Park to reach the ocean on Tuesday morning.

For generations, Surf Beach has served a multitude of purposes for members of the Lompoc community.

The coastline, which connects the Lompoc Valley with the Pacific Ocean, has been a playground, a watersports venue, a gathering place, and, sometimes, just a spot for calming relaxation.

As the COVID-19 pandemic continues to disrupt the lives — and, in some cases, livelihoods — of so many in the Lompoc Valley, the beach has seemingly taken on a new role in its evolving relationship with the community.

Dale Hammond, a docent at Surf Beach, said that over the past month he has noticed people using the beach as a refuge to escape stresses and/or anxieties brought on by the coronavirus crisis. Hammond said he views that trend as further evidence of the significant bond between the beach and the people of Lompoc.

“They come here with countless, wonderful memories, now part of an extraordinary experience spanning the generations of those who’ve lived, loved, and raised their families in this valley,” he said. “Surf [Beach] seems to me like a temple of today.”

Surf Beach remains one of the few public spaces that people can still visit amid all the shelter-in-place recommendations that have been made by public health officials. But just like at La Purisima Mission State Historic Park — another popular Lompoc Valley outdoor space — visitors are advised to be responsible and adhere to public health guidance while utilizing the 1.25 miles of accessible coastline.

Since it is on Vandenberg Air Force Base property, the beach is patrolled and monitored by docents and airmen with the 30th Space Wing.

Col. Anthony Mastalir, commander of the 30th Space Wing, acknowledged that the beach can be a particularly effective respite for people who may be dealing with added anxiety due to the ongoing pandemic.

“This is a stressful and hectic time for everyone,” Mastalir said. “We are experiencing something completely unprecedented in our lifetimes. Part of getting through this together is making sure we are taking care of ourselves physically, mentally and emotionally. Walking on the beach and getting outside can help alleviate stress and be a great retreat for some.”

Although the beach remains open, Mastalir stressed that base leaders are not recommending that people necessarily make plans to go there.

“Health and safety are our No. 1 priorities,” he said. “The safest place to be right now, as determined by federal, state and local officials, is at home. That said, we understand the need to get outside for exercise and fresh air.”

Mastalir asked that all beach visitors follow the recommendations of the federal Centers for Disease Control and Prevention, as well as those of local public health agencies.

Additionally, the restricted boundaries that are in place to protect the Western snowy plover during its nesting season remain in place, so beachgoers are encouraged to remain mindful of those, as well.

As part of those restrictions, dogs are not allowed on the beach during the plover nesting season, which runs from March through September. They are allowed, on-leash, outside of the nesting season.

Hammond said he finds the relationship between Surf Beach and the people of Lompoc to be “moving.” Mastalir, who has previously supported efforts to give the community more access to the beach, said that link was not lost on him.

“Vandenberg Air Force Base has employed several measures in light of this guidance to help protect the health and well-being of our members to ensure that we are carrying out our national security mission," he said. "We understand how hard this is for our community and the nation as a whole. We will get through this together.”

April 10 recap: Lompoc news you may have missed this week

Royal Healing Emporium — located at 721 W. Central Ave., Suite D — opened its doors this month, even with most people in the state advised to stay at home to limit the spread of COVID-19. It is the third dispensary to open in Lompoc this year, and the ninth overall.

The U.S. Fish and Wildlife Service has permitted Vandenberg Air Force Base to keep Surf Beach open for recreational access throughout the 2020 breeding season for the Western Snowy plover, the city of Lompoc announced Thursday.

With some medical supplies in short supply amid the ongoing COVID-19 pandemic, Lompoc Valley Medical Center is now accepting donations from the community.

The event was held, according to a Lompoc Unified School District spokeswoman, as a way for the employees "to show the students and their families that although they may not be at the school with them, they still care."

Although the staff and volunteers of the North County Rape Crisis and Child Protection Center will continue their work — even if much of it has been altered — they find themselves in a similar position as many local nonprofits amid this coronavirus crisis: Doing what they can to make it through an unprecedented global event while facing a largely uncertain future.

Principal Paul Bommersbach began work late last week on a mural on the southern wall of the Lompoc High gym that includes the names of the 360 members of this year’s senior class, as well as a couple messages of support for the class. That move is in addition to a large banner that the school has begun publicly displaying around the city to congratulate the class on its accomplishments, despite what turned out to be an abbreviated final year.

Beginning at 6 a.m. Sunday, April 19 — the same day the Bend Marathon would have been held — Corrin Juré and John Steffens will take off from the Cabrillo High campus in Vandenberg Village with plans to run 26.2 miles to Jalama Beach. The virtual marathon was dubbed by the pair as the “Social-distancing Unofficial Marathon,” or SUM 2020.

Lompoc High student Jennifer Ayala took out a $1,000 loan this year through the U.S. Department of Agriculture to purchase a pig with the intent of selling it, ideally for a profit, at auction during this summer’s Santa Barbara County Fair. With the coronavirus outbreak threatening the likelihood of the fair, Ayala is now scrambling to find a buyer as soon as possible so she can repay that loan.

A man and child run in the dunes at Surf Beach, west of Lompoc, on Tuesday morning.

A sign and roped area closes part of Surf Beach, north of the parking lot, on Tuesday morning. An area south of the signs is open.

Western snowy plovers stand outside the reach of the waves at Surf Beach, west of Lompoc, on Tuesday morning.

Visitors to Surf Beach watch the waves near the train tracks Tuesday morning.

A trail parallel to the railroad tracks allows access from Surf Beach to Ocean Beach Park.

The Santa Ynez River breaks through the sand at Ocean Beach Park to reach the Pacific Ocean on Tuesday morning.

Runoff from the Santa Ynez River has a different color than the Pacific Ocean, after the fresh water broke through the sand at Ocean Beach Park to reach the ocean on Tuesday morning.