Packers vs. 49ers: Follow updates from the NFC Championship game

Throwback Thursday: Historic coverage of impeachment in the United States
Share this
{{featured_button_text}}
1 of 11 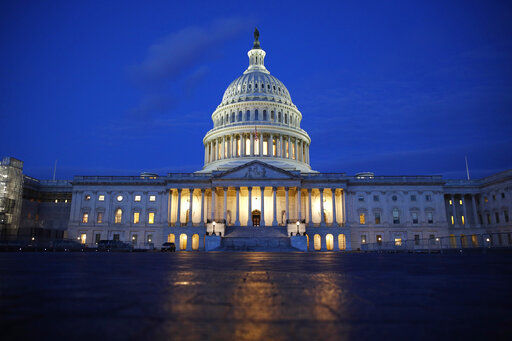 FILE - In this Dec. 4, 2019, file photo, light shines on the U.S. Capitol dome in Washington. The votes are there. The rules and choreography are set, more or less. And now — hear ye, hear ye — the Senate impeachment trial of President Donald Trump is set to begin. 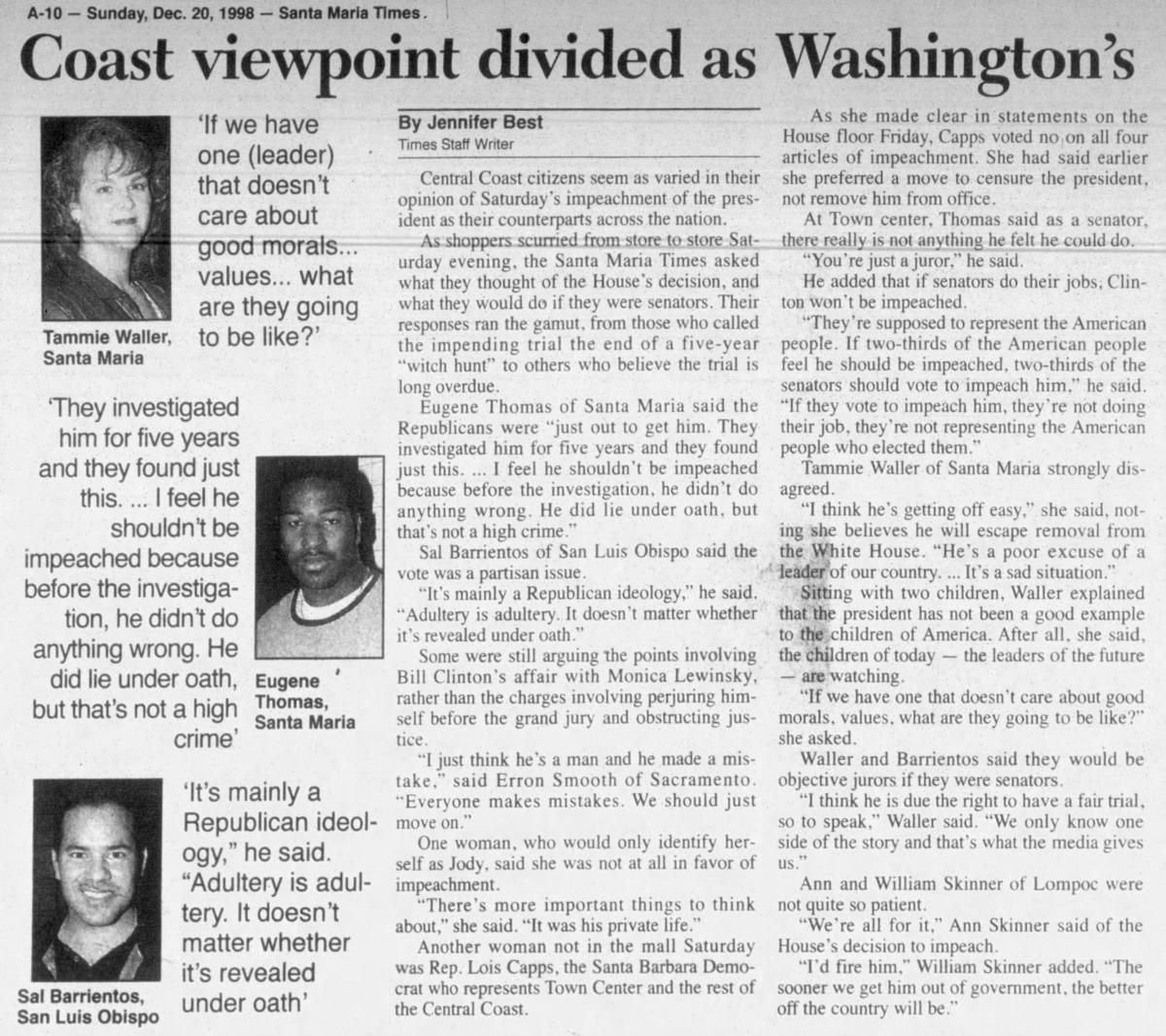 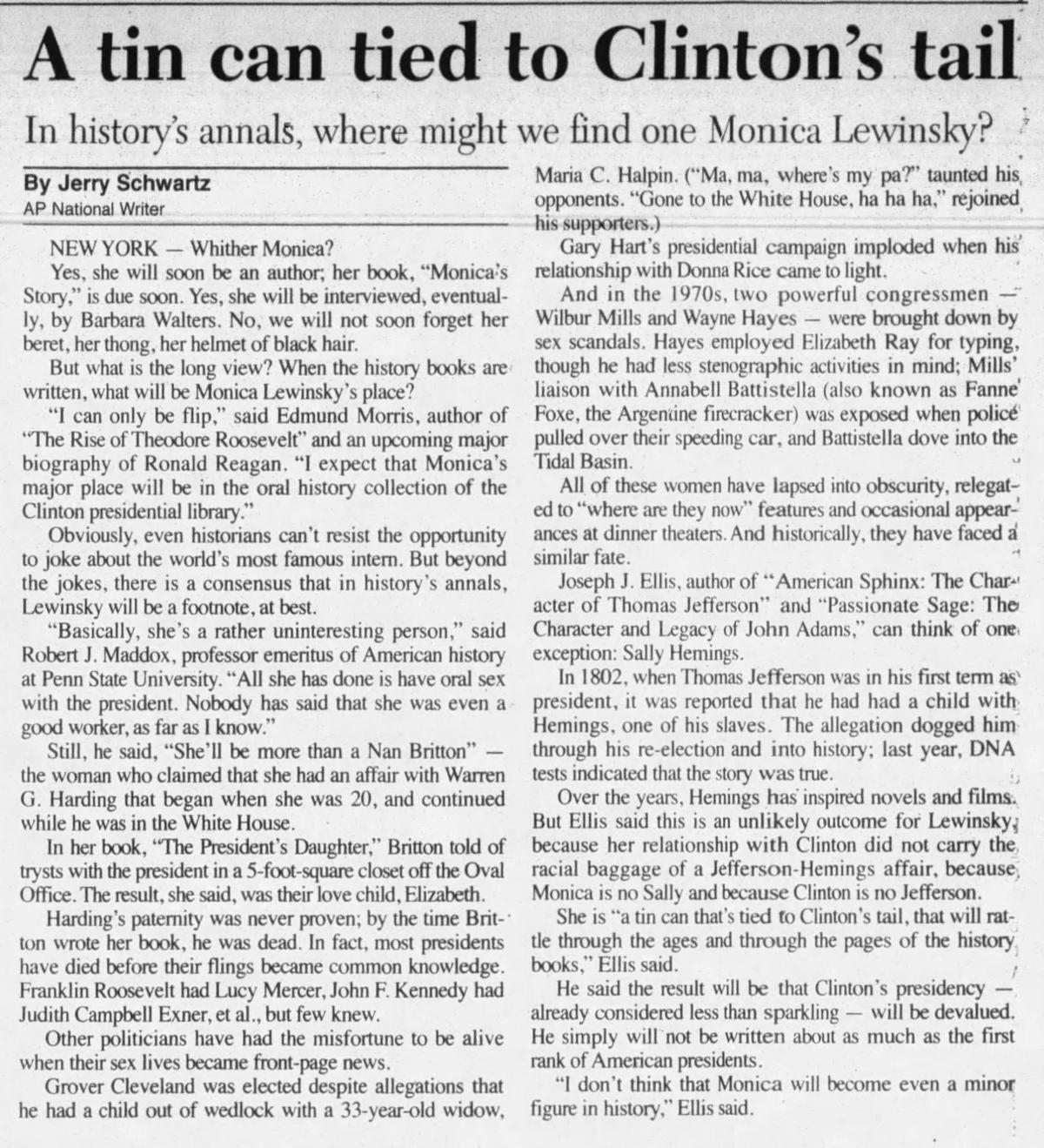 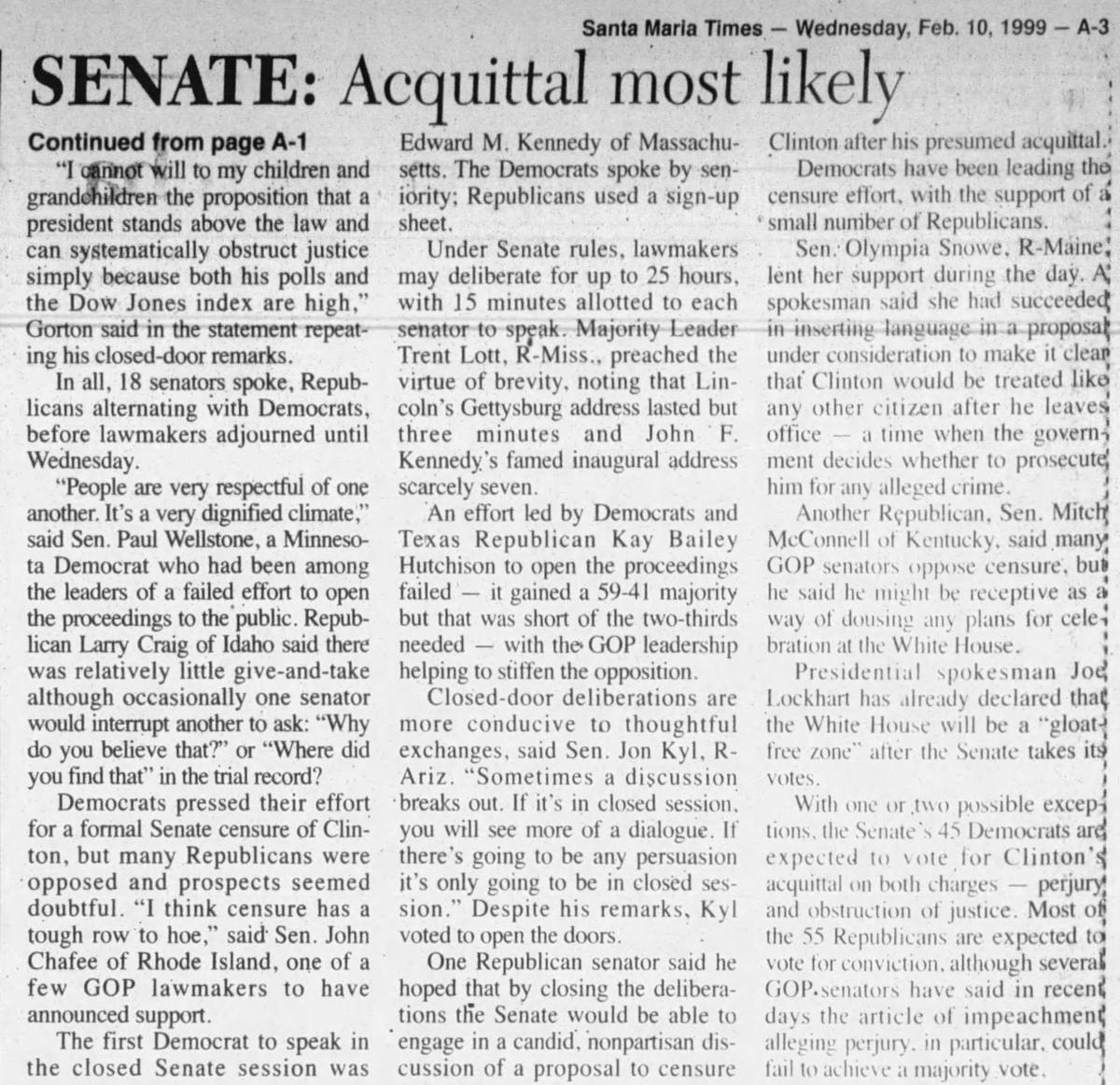 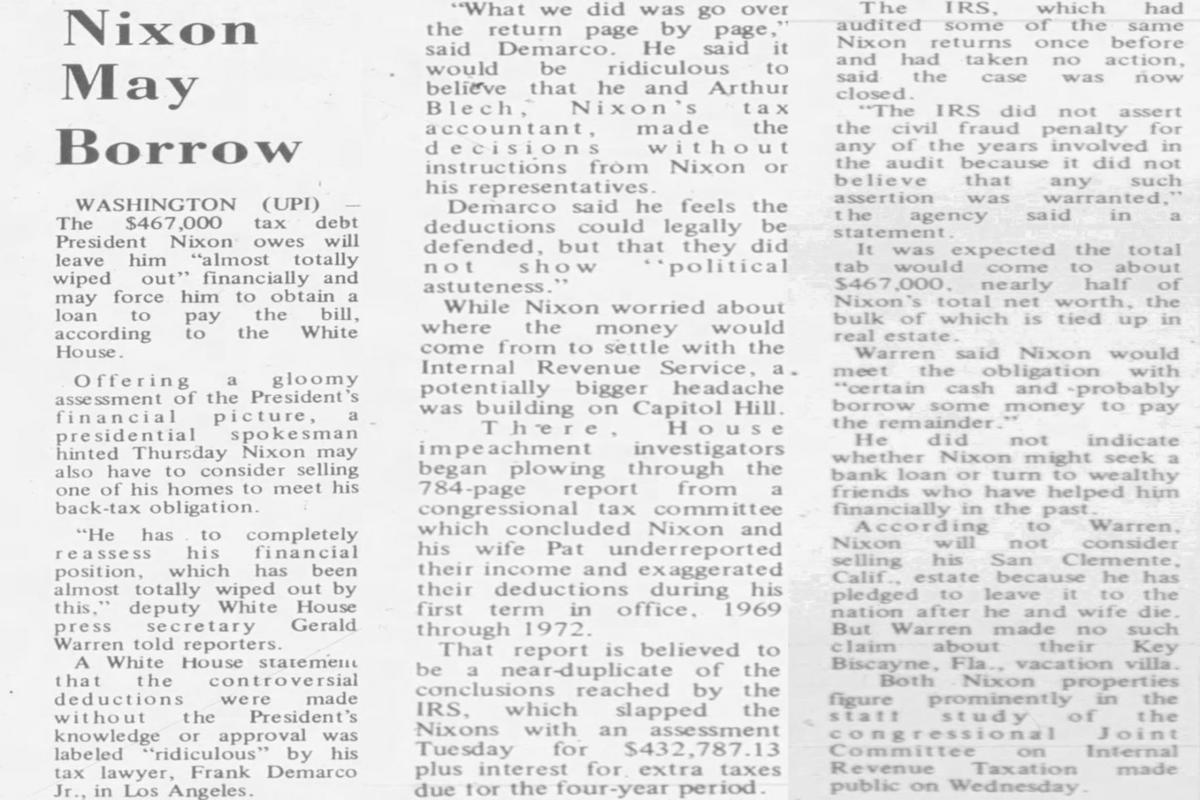 The impeachment process of President Donald J Trump has dominated headlines coast to coast for several months now. While the speeches, hearings, and tweets have driven the majority of the coverage, and the reaction to the coverage; specifics about the actual process of impeachment have been few and far between. We hope to explain the process itself a bit better in this 'Throwback Thursday'.

Impeachment is an action taken by Congress that charges and convicts a federal office holder of misconduct that is improper, illegal or brings the office into a place of dishonor.

It is much like a criminal indictment on a specific charge.

When investigative bodies, civil courts, or Congressional hearings bring information to light that would constitute an impeachable offense, the House of Representatives is presented with potential articles of impeachment by the House Judiciary Committee.  The House then votes on the veracity of each individual charge and if approved by a simple majority, the approved articles are sent to the Senate for adjudication.

If the House of Representatives votes to impeach a federal office holder, that office holder has been "impeached".

House votes to send Trump impeachment to Senate for trial

The U.S. House voted Wednesday to send two articles of impeachment against President Donald Trump to the Senate and approve House prosecutors for only the third impeachment trial in American history.

It is then up to the Senate where the matter is open to floor debate and argument until the Senate votes on whether the officer is found guilty of the charges brought against them by the house, and whether or not they should be removed from office.

Three Presidents (Donald Trump, Bill Clinton and Andrew Johnson) have had Articles of Impeachment pass the house, none of them were found guilty by the Senate.

While there were multiple investigations into the actions of the Nixon administration surrounding the famous Watergate break-in, President Nixon's tax problems, a separate break-in at an LA attorney's office, the secret bombing campaigns in Laos and Cambodia during the Vietnam War, and more; Nixon resigned before the Articles of Impeachment were voted on by the house.

We have used the phrase 'federal office holder' for people who have been impeached or have had articles of impeachment against them approved by the House, because despite the high profile nature of Presidential impeachments, the vast majority of impeachment proceedings and convictions have been against federal judges, and most happened before the 1900's.

With the help of the House Judiciary Committee we will take a look back at the history of presidential impeachments.

Some cases might start in other committees but it is the judicial committee that sends them through to the full House.

In some instances the committee conducted its own investigations and in others reports from special prosecutors, courts or grand juries were used to bring articles of impeachment against the accused office holder.

The information in ITALICS contained in the following passages comes from the House Judicial Committee's report on its work dealing with impeachment cases that was released on August 14, 2007.  The history included in this report was used to form the basis of the most recent report from the Judiciary Committee about impeachment proceedings against President Trump.

The House, however, on December 7, 1867, rejected the Committee’s resolution impeaching the President. A second inquiry into the President’s conduct began with the new year, this time under the direction of the Committee on Reconstruction.

On February 10, 1868, the Reconstruction Committee received the evidence gathered in 1867. On February 21, 1868, President Johnson formally dismissed Secretary of War Edwin M. Stanton. The dismissal of Stanton was a direct violation of the Tenure of Office Act of March 2, 1867, which required Senate concurrence in the appointment and removal of members of the Cabinet.

Congressional reaction to Stanton’s dismissal was immediate. The day after President Johnson removed Stanton, the Committee on Reconstruction recommended impeachment of the President.

On February 24, 1868, the House approved the Committee’s resolution, and subsequently, 11 articles of impeachment were adopted by the House on March 2 and 3, including the charge that the President had criticized Congress in speeches. The principal focus of the articles, however, related to the dismissal of Stanton.

In dramatic votes taken on May 16 and May 26, President Johnson was acquitted by a single vote on each of the three articles against him that were presented to the Senate.

On February 6, 1974, for the first time since the administration of Andrew Johnson, and only the second time in the history of the Republic, the House of Representatives formally authorized an impeachment inquiry of a president.

On that day, the House of Representatives adopted House Resolution 803 by a vote of 410 to 4, authorizing and directing the Committee on the Judiciary “to investigate fully and completely whether sufficient grounds exist for the House of Representatives to exercise its constitutional power to impeach Richard M. Nixon, President of the United States of America” and to report “such resolutions, articles of impeachment, or other recommendations as it deems proper.”

This action officially set into motion an investigation by the Judiciary Committee which culminated in the Committee’s reporting three articles of impeachment. It eventually led to President Nixon’s resignation on August 9, 1974, and to Vice President Ford becoming the

38th President of the United States. During the first session of the 93rd Congress approximately 40 resolutions were introduced in the House of Representatives calling for either the impeachment of or an investigation into the possible impeachment of President Richard M. Nixon.

The October 20, 1973 presidential firing of Special Watergate Prosecutor Archibald Cox precipitated a majority of the resolutions

On February 6, 1974, the House passed House Resolution 803 by a vote of 410 to 4 authorizing and directing the Judiciary Committee “to investigate fully and completely whether sufficient grounds exist for the House of Representatives to exercise its constitutional power to impeach Richard M. Nixon, President of the United States of America.” The resolution granted subpoena power to the Committee, and specifically authorized the use of funds made available under House Resolution 702 to carry out the investigation.

On April 3, the Joint Committee on Internal Revenue Taxation reported its findings that President Nixon owed $476,431, including interest, on back taxes for the years 1969 through 1972. On April 11, the Judiciary Committee, exercising the power granted to it by House Resolution 803, issued a subpoena to President Nixon. The subpoena demanded tapes and other records of 42 presidential conversations, which the Committee had sought to obtain from the White House for nearly two months.

President Nixon, in a conciliatory response on April 4, stated that he would pay the back taxes. On the evening of April 29, in a precedent-setting speech to the Nation, the President announced that he would turn over to the House impeachment investigators, and make public,edited transcripts of White House conversations that “will tell it all” and prove him innocent in the Watergate affair.

On July 19, 1974, both of the Committee’s senior counsels argued that by virtue of the evidence presented during the hearings, a recommendation for a Senate impeachment trial was warranted. On the evening of Wednesday, July 24, for the fi rst time in history, formal deliberations of a congressional Committee considering arguments for and against impeachment of an American President were broadcast over the Nation’s television and radio networks.

On August 5, however, Nixon’s remaining support in Congress began to crumble following his disclosure that six days after the Watergate burglary, he had ordered a halt to the investigation of the break-in for political as well as national security reasons and he had kept this information from his lawyers and supporters on the Judiciary Committee. In the face of resignation demands by his strongest supporters, the following morning, told his cabinet that he did not intend to resign and believed that the constitutional process should be allowed to run its course.

In a televised speech from the oval office, Mr. Nixon, at 9 o’clock the following evening, announced that he intended to resign as President of the United States because “it is evident to me that I no longer have a strong enough political base in the Congress to justify [the] effort [to stay in office].” He made no mention of impeachment, but the significance of the Judiciary Committee investigation was self-evident.

President Nixon formally resigned in a letter to the Secretary of State some 14 hours later, shortly after 11:30 a.m. on August 9, 1974. Gerald Rudolph Ford automatically became the Nation’s 38th President at that time.

The impeachment proceedings with respect to President Clinton began in the 105th Congress and concluded in the 106th Congress.

The first impeachment-related resolution introduced in the 105th Congress was that of Representative Bob Barr, who introduced House Resolution 304 on November 5, 1997. This resolution directed the Committee on the Judiciary to undertake an inquiry into whether grounds existed to impeach William Jefferson Clinton, the President of the United States, and to report its recommendations to the House of Representatives and, if the Committee so determined, produce a resolution of impeachment.

In the latter days of the 105th Congress, on September 9, 1998, the House received a communication from Kenneth W. Starr, an independent counsel appointed to investigate allegations of criminal wrongdoing by President Clinton.

At 9:33 p.m. the following day, the House Committee on Rules reported House Resolution 525 as an original measure, H. Rept. 105–703, providing for deliberative review of the independent counsel’s communication.

The resolution directed the Committee on the Judiciary to review the communication and related matters to determine whether sufficient grounds existed to recommend to the House that an impeachment inquiry be commenced. The resolution stated that the material transmitted to the House by the independent counsel on September 9th was deemed to be referred to the Committee.

Under the resolution, a 445 page portion of the material comprising an introduction, a narrative, and a statement of grounds, was to be printed as a House document, while the remainder of the material transmitted was to be deemed to be received in executive session, and was to be released from that status on September 28, 1998, except as otherwise directed by the Committee.

After spirited debate in the House two of the four impeachment charges were sent to the Senate on December 19, 1998.

FILE - In this Dec. 4, 2019, file photo, light shines on the U.S. Capitol dome in Washington. The votes are there. The rules and choreography are set, more or less. And now — hear ye, hear ye — the Senate impeachment trial of President Donald Trump is set to begin. 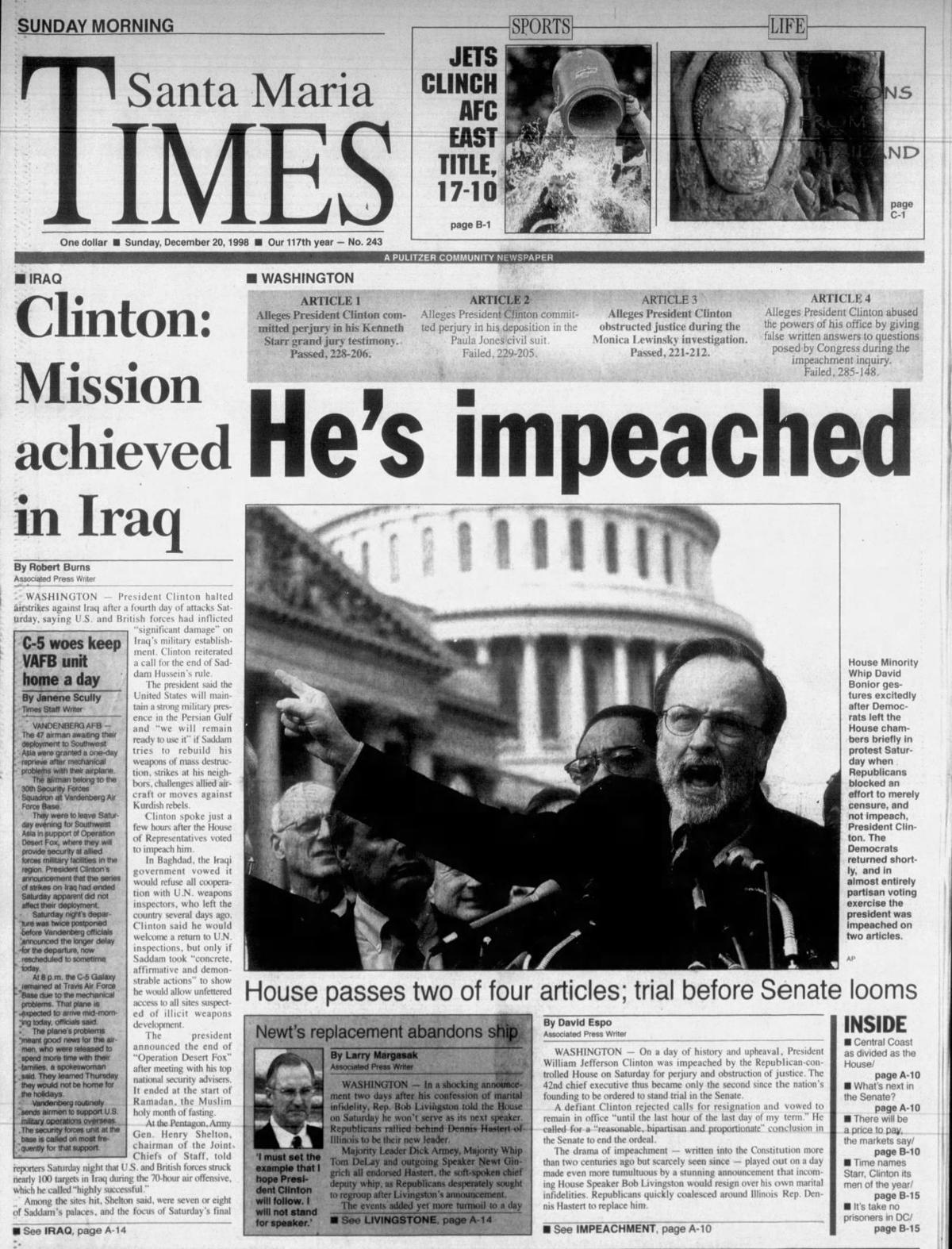 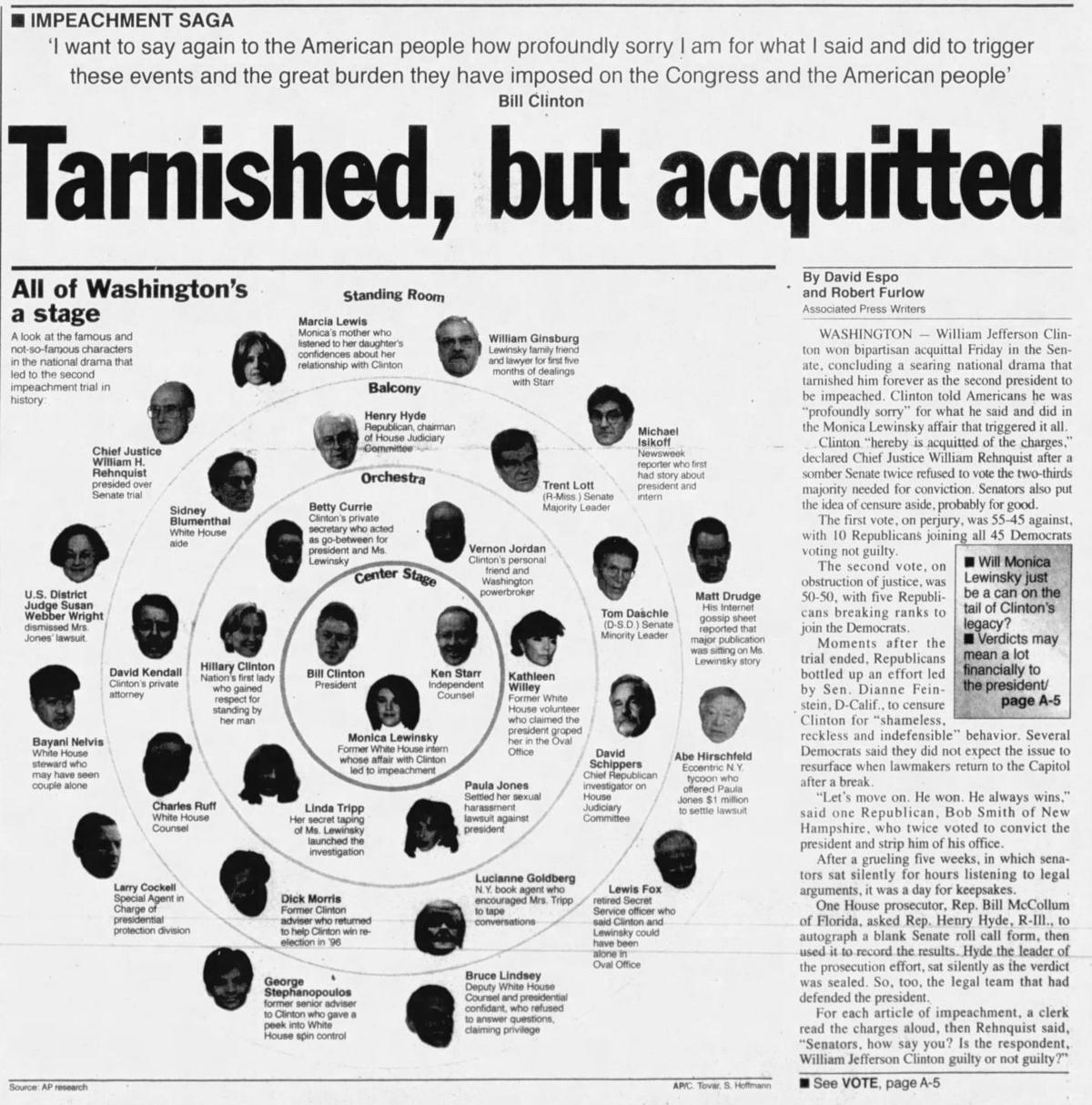 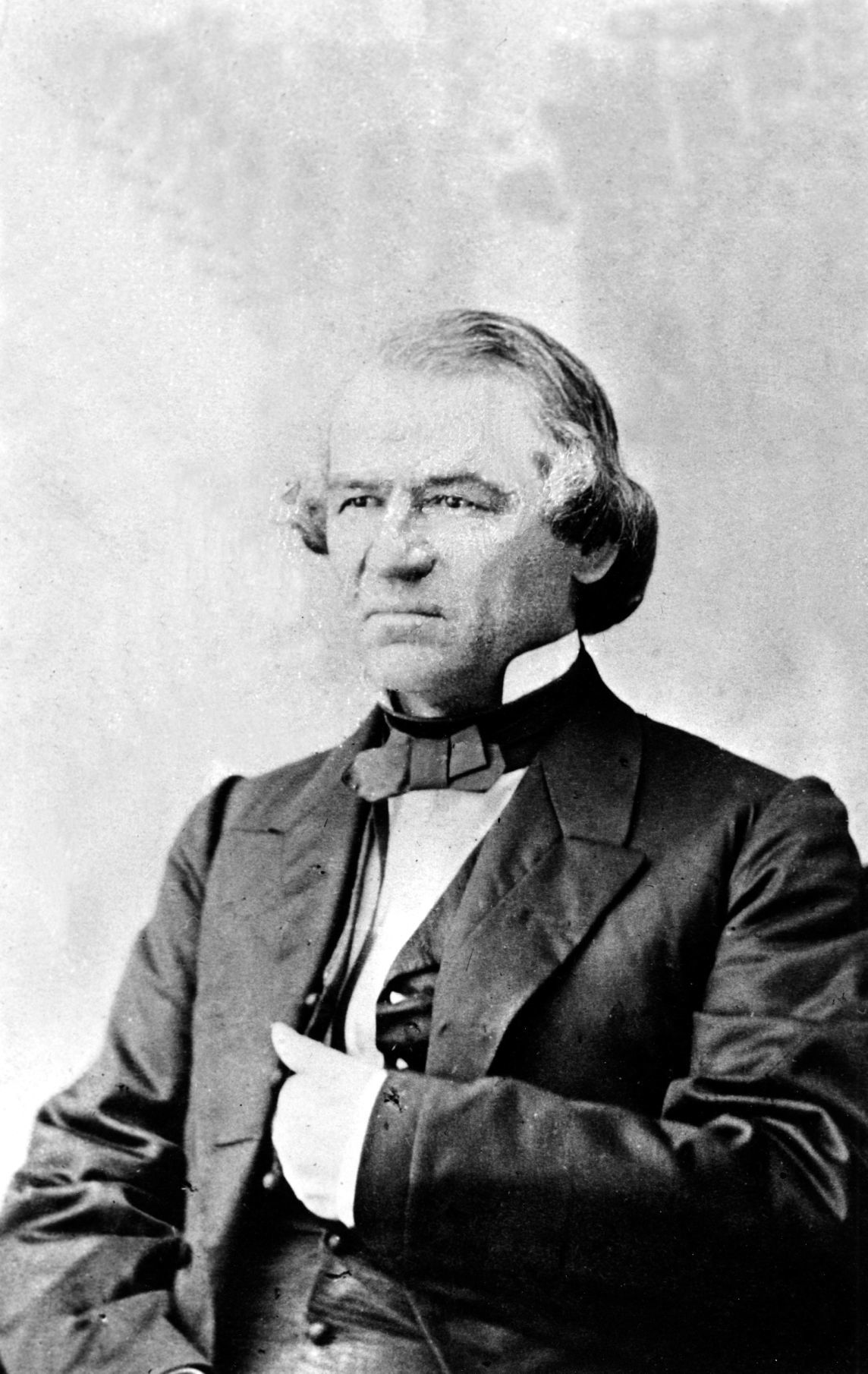 This is an undated photo of the seventeenth President of the United States Andrew Johnson. (AP Photo)