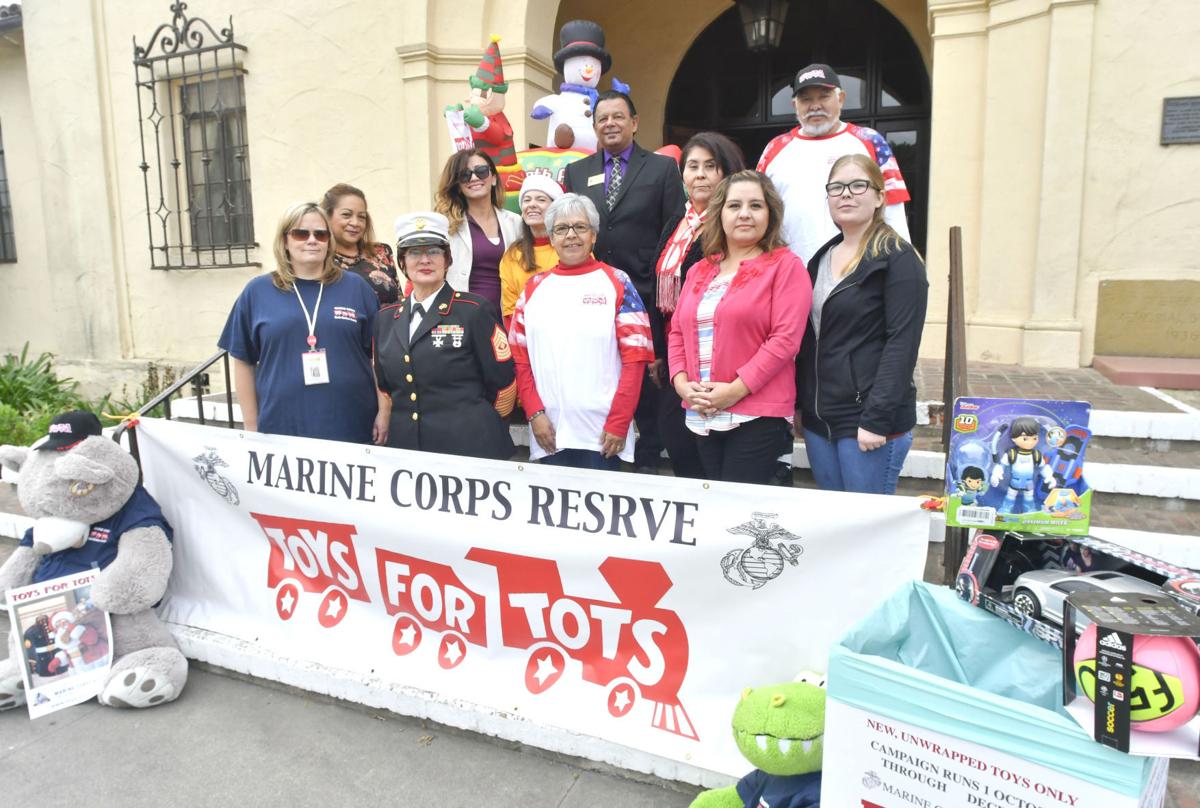 Officials gather at the Veterans Memorial Building for Thursday's kickoff of the Toys for Tots drive in Lompoc. 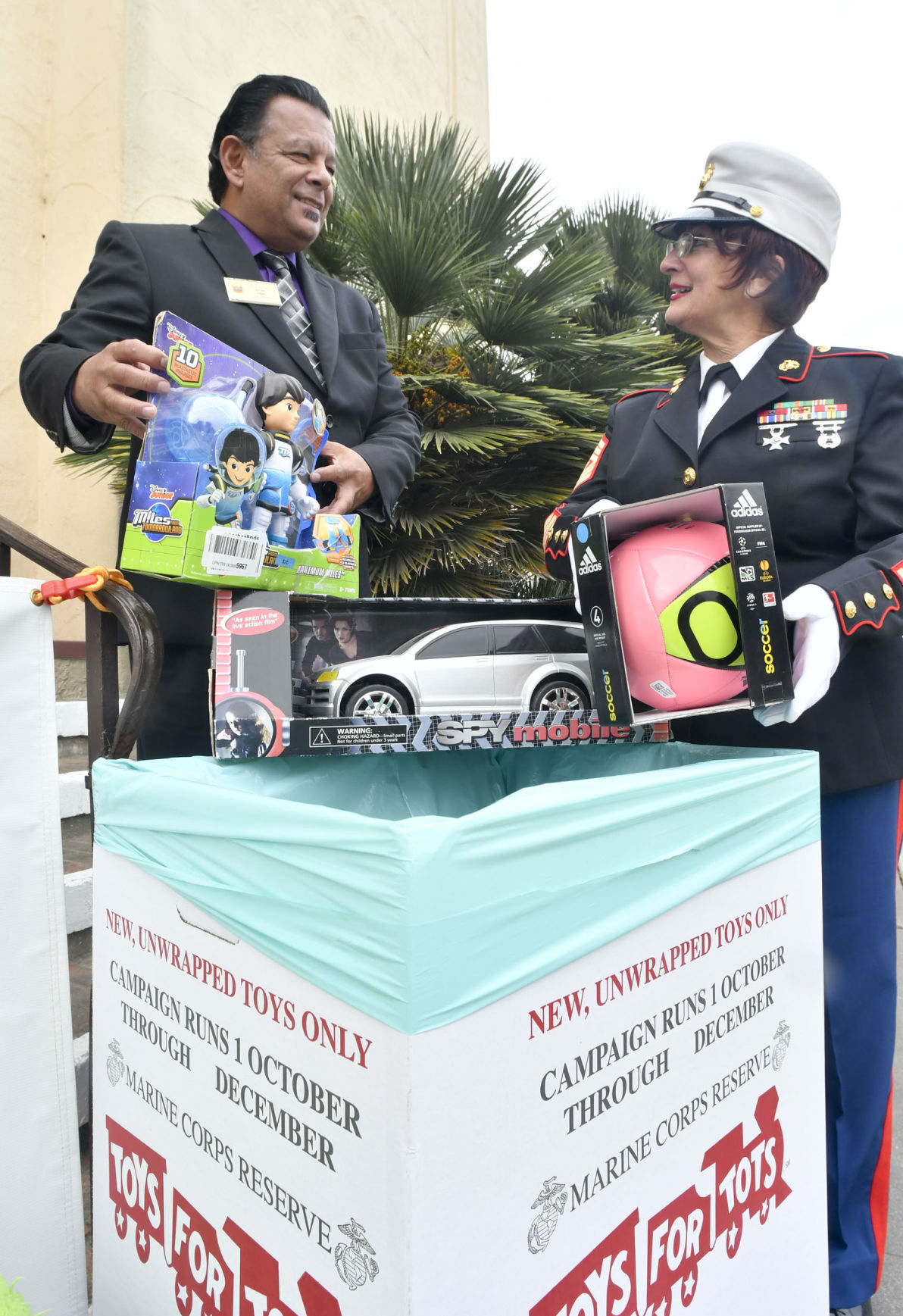 Lompoc City Councilman Victor Vega and Soledad Kennedy talk during Thursday's kickoff of the Toys for Tots drive in Lompoc.

The annual Toys for Tots campaign is underway in Lompoc as collection boxes have gone out to several area businesses and agencies in an effort to brighten the holiday season for local families in need.

Organizers of the local Toys for Tots program gathered Thursday morning at the Lompoc Veterans Memorial Building to jump-start this year’s collection drive. The kickoff event included representatives from the Marine Corps Reserve, which founded the Toys for Tots program in 1947, as well as representatives of Santa Barbara County’s Community Action Commission (CAC), which is coordinating the Lompoc effort for the fifth straight year.

They were joined by other community and civic leaders.

“I enjoy this every year,” Soledad Kennedy, a Lompoc resident and Marine Corps Reserve member who has been involved in Toys for Tots campaigns around the county for more than two decades, said prior to the kickoff.

Through the campaign, community members are encouraged to donate new, unwrapped toys, a task that can be accomplished at several locations around the city. Among the spots where collection boxes are scheduled to be placed are at each of the Lompoc fire stations, Toyota of Lompoc, the Embassy Suites, Perry’s Auto, Raytheon and Walmart.

Parents who would like to register their family to receive the toys can do so Nov. 14 and Nov. 15 at the Lompoc Veterans Memorial Building, 100 E. Locust Ave.

For more information on registration, contact the CAC at 740-4555.

Toys will be given out during a distribution event at the Veterans Memorial Building on Dec. 16.

A few upcoming events will look to add to the toy drive’s haul.

The Lompoc Valley Distance Club will host its annual “Chase Santa” run/walk beginning at 9 a.m. Dec. 2 at River Park. The entry fee to participate in the event, in which runners and walkers attempt to outpace a participant dressed as Santa Claus, is $5 plus one unwrapped toy with a value of $10.

More information on that event is available by contacting Fran at 733-2255 or iristocrat@gmail.com.

Also on Dec. 2, Barnstormers Aero Services Inc., will host its annual display and entertainment event at the Lompoc Airport. Several types of aircraft are expected to be made available for viewing at that event, set to begin at 10 a.m. As in the past, the entry fee will be one new, unwrapped toy.

On Dec. 10, the Whistle Stop in Lompoc will hold its annual motorcycle ride to benefit Toys for Tots from 8 a.m. to 5 p.m.

The Toys for Tots organizers also work with other agencies that help families in need, including the American Red Cross and the Salvation Army.

Anyone who would like to volunteer to help with this year’s campaign is encouraged to contact the CAC, also at 740-4555.

Over the last few years, an average of about 600 Lompoc families each year have been treated to gifts from Toys for Tots. Kennedy said she’s hopeful that number goes down this year, even if the total of toy donations goes up.

“Less numbers are better,” she said, referring to the total number of families that register. “If the numbers go down, that means the economy is doing better in Lompoc. So we’re always looking for lower numbers.”

A Santa Maria woman was charged with trafficking firearms for the Aryan Brotherhood gang Friday following a federal multi-agency sting operation that yielded more than 60 arrests across three states.

A murder charge and three enhancements were upheld against a Santa Maria woman accused of killing a 53-year-old man and tossing his dismembered remains in a Nipomo golf course pond in 2018.

Three female agricultural workers received minor injuries after a Ford Ranger truck went off the road and struck them in a field near the Santa Maria landfill Tuesday.

3 minor injuries reported after vehicle goes over side of Hwy 166, east of Santa Maria

Three people were injured Friday morning after their vehicle drove over the side of Highway 166, east of Santa Maria.

Santa Barbara County sheriff’s investigators are looking for a man who sexually assaulted a female hiker Nov. 8 on the Aliso Trail in Santa Yn…

Vandenberg Air Force Base has been cut from the newest list of finalists in the competition to become headquarters of the U.S. Space Command, …

Three men and eight juveniles were arrested on suspicion of illegally using firearms following several reports of shootings in Lompoc since October amid a recent uptick in gang-related crimes.

Customers in Santa Barbara County to get renewable electricity in January

Officials gather at the Veterans Memorial Building for Thursday's kickoff of the Toys for Tots drive in Lompoc.

Lompoc City Councilman Victor Vega and Soledad Kennedy talk during Thursday's kickoff of the Toys for Tots drive in Lompoc.