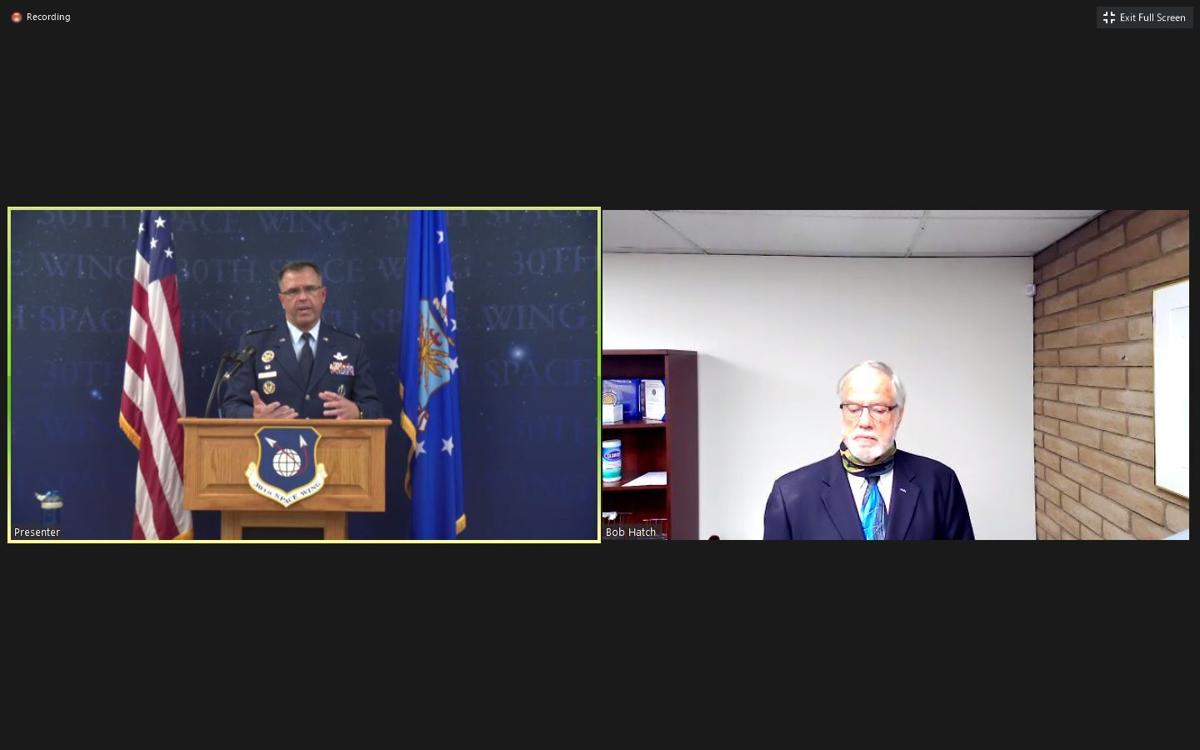 This screenshot from Thursday's "State of the Base" webinar shows 30th Space Wing Commander Col. Anthony Mastalir, left, answering a question from event emcee Bob Hatch. During the event, Mastalir discussed some of the changes that are expected at Vandenberg Air Force Base in the coming months. 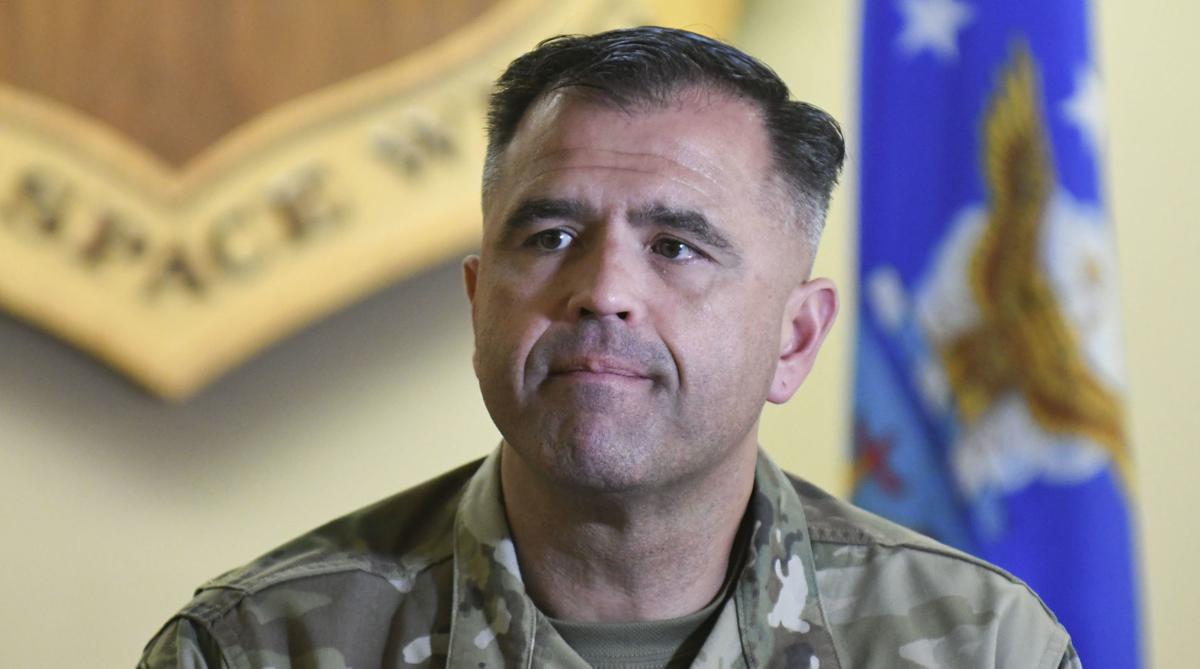 Col. Anthony Mastalir, shown in this Oct. 3, 2019, file photo, led an online "State of the Base" presentation Thursday in which he discussed some of the changes that are in store for Vandenberg Air Force Base.

As Col. Anthony Mastalir, commander of the 30th Space Wing, looked ahead to the future of Vandenberg Air Force Base, he expressed a great deal of excitement — as well as significant uncertainty — for what could be the most transformative period in the installation’s history.

During a “State of the Base” webinar Thursday, Mastalir pointed to VAFB’s new role as a host site for a key component of U.S. Space Command, which supports the recently established U.S. Space Force, as well as a new push by base leaders and community partners to develop the base into a thriving spaceport capable of supporting a rapidly growing commercial space industry, as just some of the major transitions underway.

With so much in flux, Mastalir acknowledged that even he was unsure what VAFB will look like or even be called by this time next year. And those questions weren’t just limited to the base itself.

“Surprisingly, we still don’t know what we’re gonna call ourselves, so for now we’re just saying 'space professionals,'” Mastalir said, noting that the 30th Space Wing name would also soon be no more.

That revelation fit with the theme of the presentation, marked by enthusiasm for the road ahead while simultaneously embracing the unknown.

“You’ve probably seen a lot of articles in the papers and there’s a ton of different ideas out there,” Mastalir said, referring to the job title that will replace “airman” for enlisted Space Force servicemen and women. “All I can tell you is that decision is not going to be made at my level, and I would tell you that the chief of space operations is getting a lot of input, as well.”

The new Space Force, which became the country’s sixth armed service branch when it was stood up in December 2019, figures to play prominently in VAFB’s plans.

Along with currently housing a component of U.S. Space Command, VAFB is also still under consideration to serve as the command’s headquarters. A decision on that is expected in early 2021, Mastalir said.

In the meantime, a lot of the structural setup of the Air Force wing and ranks at the base are being changed, along with various insignia, to reflect the new mission of the Space Force, which is headquartered at the Pentagon.

Those changes are expected to include new Space Force uniforms and prominent displays of the recently revealed Space Force logo. Mastalir highlighted the new logo in his presentation, which also featured the Space Force’s first recruitment commercial — a 30-second spot that Mastalir said was filmed at VAFB in early March.

Perhaps most notably, VAFB’s very name could soon become a thing of the past.

In March, the 30th Space Wing hinted that the base could be on the verge of being renamed Vandenberg Space Force Base, but Mastalir said Thursday that action had been put on hold as a national debate has grown around bases being named after people with problematic pasts.

There has been no significant push to remove the name Vandenberg — the base is named after the late Hoyt S. Vandenberg, a former Air Force general who helped the Air Force become the first military branch to racially integrate — but Mastalir suggested that base naming, in general, was too sensitive an issue to rush into.

“There’s a lot of turbulence right now with base naming, so we’re gonna continue to work through that and we will let you know if we have a new identity,” he said.

Although VAFB is most widely known for its Western Range, which serves as the United States’ West Coast launch site for polar orbits, this year has been particularly quiet on that front. The base has hosted a pair of unarmed Minuteman III intercontinental ballistic missile tests so far in 2020 — including one on Tuesday — but no rocket launches.

“This is fortuitous,” Mastalir said of that lack of rocket activity, “given the COVID-19 pandemic really set everybody back on their heels for a few months here, and, in many ways, we’re still kind of hunkering down and learning how to perform operations differently, safely in the midst of this global pandemic.”

Mastalir said the base’s launch action should pick up for the second half of the year, with two more ICBM tests and three commercial rocket launches planned over the next five months.

One of those rocket launches is slated to be a flight test for a new Alpha rocket developed by Firefly Aerospace. That test will mark Firefly’s first launch from VAFB. The other planned launches, none of which have set dates, involve a SpaceX Falcon 9 rocket, which is also slated to land back at the base, and a United Launch Alliance Delta IV Heavy.

Beyond 2020, that schedule could really pick up.

On Wednesday, Mastalir joined with leaders from REACH, an organization that aims to boost the Central Coast economy, and other community partners to announce an agreement they had reached to develop an active spaceport at VAFB, a plan that includes transforming a portion of the base into a publicly accessible commercial launch zone.

Mastalir said that he and military officials were simply partners in the project and he declined to offer a timeline for completion.

Once developed, though, backers of the plan expect for dozens of companies to utilize the zone, thereby boosting the economies of the surrounding communities.

Mastalir said VAFB was ideal for such a spaceport, given its geographic position and excess of land. Base leaders have already identified a 2,000-acre plot of land that could host the commercial zone.

In describing the potential for the commercial zone, Mastalir said it boils down to identifying what infrastructure is needed to help launch companies be able to operate without overly burdensome costs. That could include the creation of administrative offices, payload integration facilities, command and control rooms for in-orbit satellites, or spaces for research and development that would allow for various groups to work together.

“This would be an opportunity [for] some of these new entrants that perhaps want to spend their capital focusing on the innovation that they’re gonna bring to the market, rather than a lot of the overhead costs,” Mastalir said. “This could help defray, potentially, some of those costs and make the Central Coast more attractive for those customers and for those launch providers.”

During the event, presented jointly by the Lompoc and Santa Maria chambers of commerce, emcee Bob Hatch commended Mastalir for his leadership in preventing a coronavirus outbreak on the base.

Hatch noted that Airmen have continued working and traveling during the pandemic, and said that their ability to remain virus-free was crucial for national defense.

Mastalir said the base’s current active coronavirus case count was “slightly more than zero,” but he added that “we’re definitely in a good place right now.” He credited that low count to contact tracing programs, which he said have shown that base personnel have been following protocols and taking their health and safety seriously.

“I am delighted to be able to report that our contact tracing does not reveal that members are acting irresponsibly; what it reveals is that everybody is adhering to the guidelines that we have put out,” he said.

It's because of the pandemic that the "State of the Base" presentation was held online Thursday. It was initially supposed to be an in-person event on base in mid-March, but was postponed due to the health crisis.

Mastalir noted early in his presentation that he never planned on delivering his address to a camera in a mostly empty room, but he said "extraordinary times call for extraordinary measures."

With so much on the horizon — new launch providers, new launch vehicles, a new military mission — Mastalir said he was confident the coming months would remain extraordinary at VAFB.

“The market, in terms of launch demand, is gonna grow,” he said. “All the indicators are in place. I’ve seen so many architectural proposals that call for massively proliferated constellations; I’m talking hundreds, thousands of satellites. ... So the demand is gonna be there.”

The ICBM, which is a component of the United States’ nuclear weapons system, was launched from the northern portion of VAFB at 12:21 a.m. It reportedly traveled more than 4,200 miles to the Kwajalein Atoll in the Marshall Islands.

Charles “Les” Fish, a veteran of World War II and the Korean War, figured he’d celebrate his 99th birthday Monday by simply having a quiet dinner with a neighboring family at their home. After the meal, however, the family brought Fish to a chair that had been set up in its yard, and a clearly surprised Fish watched as a parade of vehicles passed by the home and at least a few dozen people offered gifts, cards, or simply well wishes.

The launch of the Air Force Global Strike Command ICBM, which is a component of the United States’ nuclear weapons system, is scheduled for a window between 12:01 and 6:01 a.m. The test was announced Tuesday morning by the 30th Space Wing.

The missile, which is part of the nation’s nuclear weapons system, was fired shortly after 12:03 a.m. The purpose of the test, according to Air Force Global Strike Command, was to validate and verify the safety, security, effectiveness, and reliability of the weapon system.

The bid to bring the command to VAFB was formally submitted Wednesday to the Air Force. It was supported by REACH, an economic impact organization that focuses on the Central Coast, as well as several elected officials, including Gov. Gavin Newsom; Sen. Kamala Harris, who is also the Democratic nominee for vice president; Sen. Dianne Feinstein; Congressman Salud Carbajal; and Assemblyman Jordan Cunningham.

This screenshot from Thursday's "State of the Base" webinar shows 30th Space Wing Commander Col. Anthony Mastalir, left, answering a question from event emcee Bob Hatch. During the event, Mastalir discussed some of the changes that are expected at Vandenberg Air Force Base in the coming months.

Col. Anthony Mastalir, shown in this Oct. 3, 2019, file photo, led an online "State of the Base" presentation Thursday in which he discussed some of the changes that are in store for Vandenberg Air Force Base.