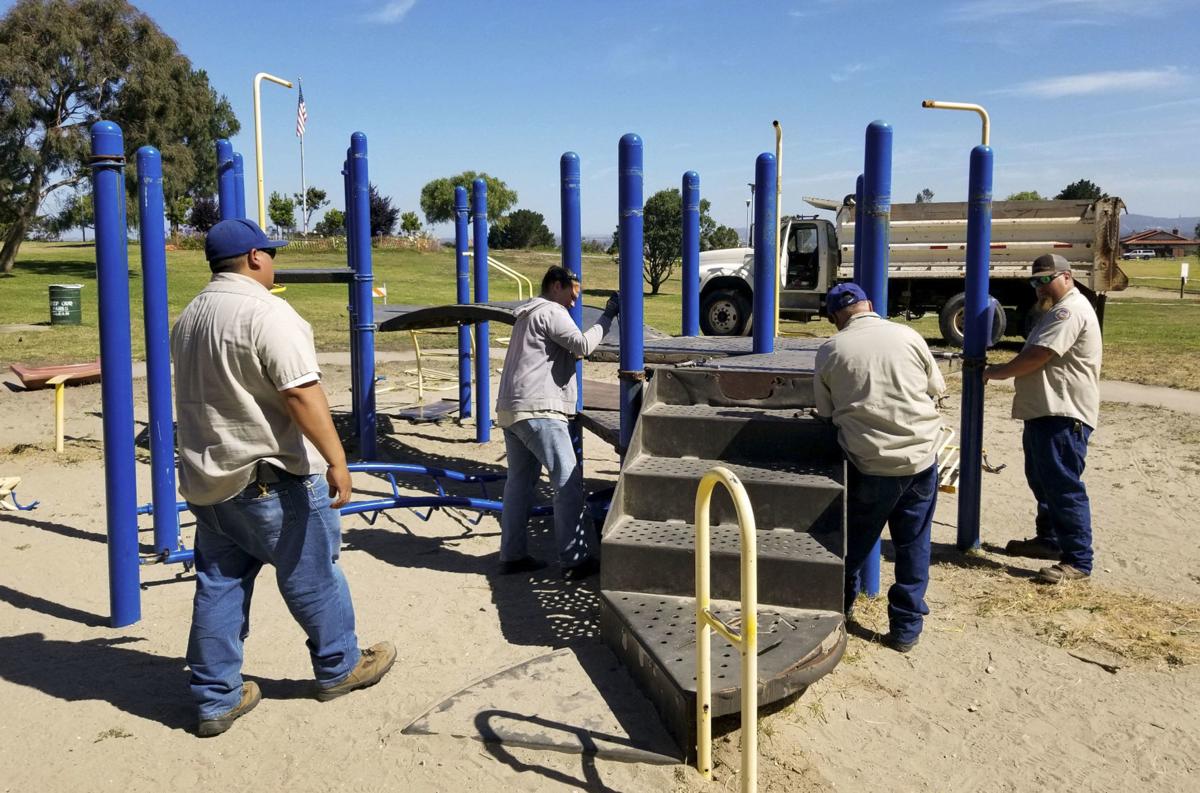 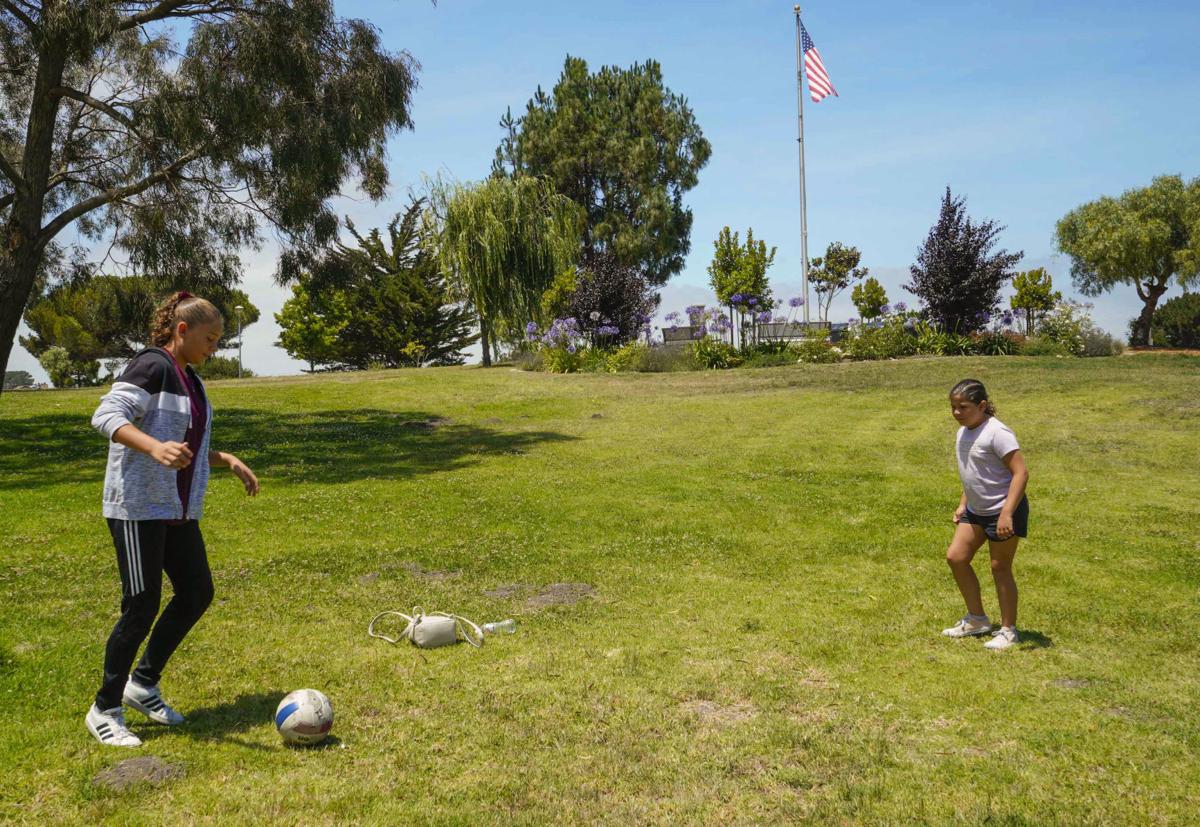 Celeste Craighead, left, 12, and her sister Jade Craighead, 8, both of Sacramento, play soccer near one of the vacant play areas at Beattie Park. Playground equipment has been removed due to its unsafe condition. 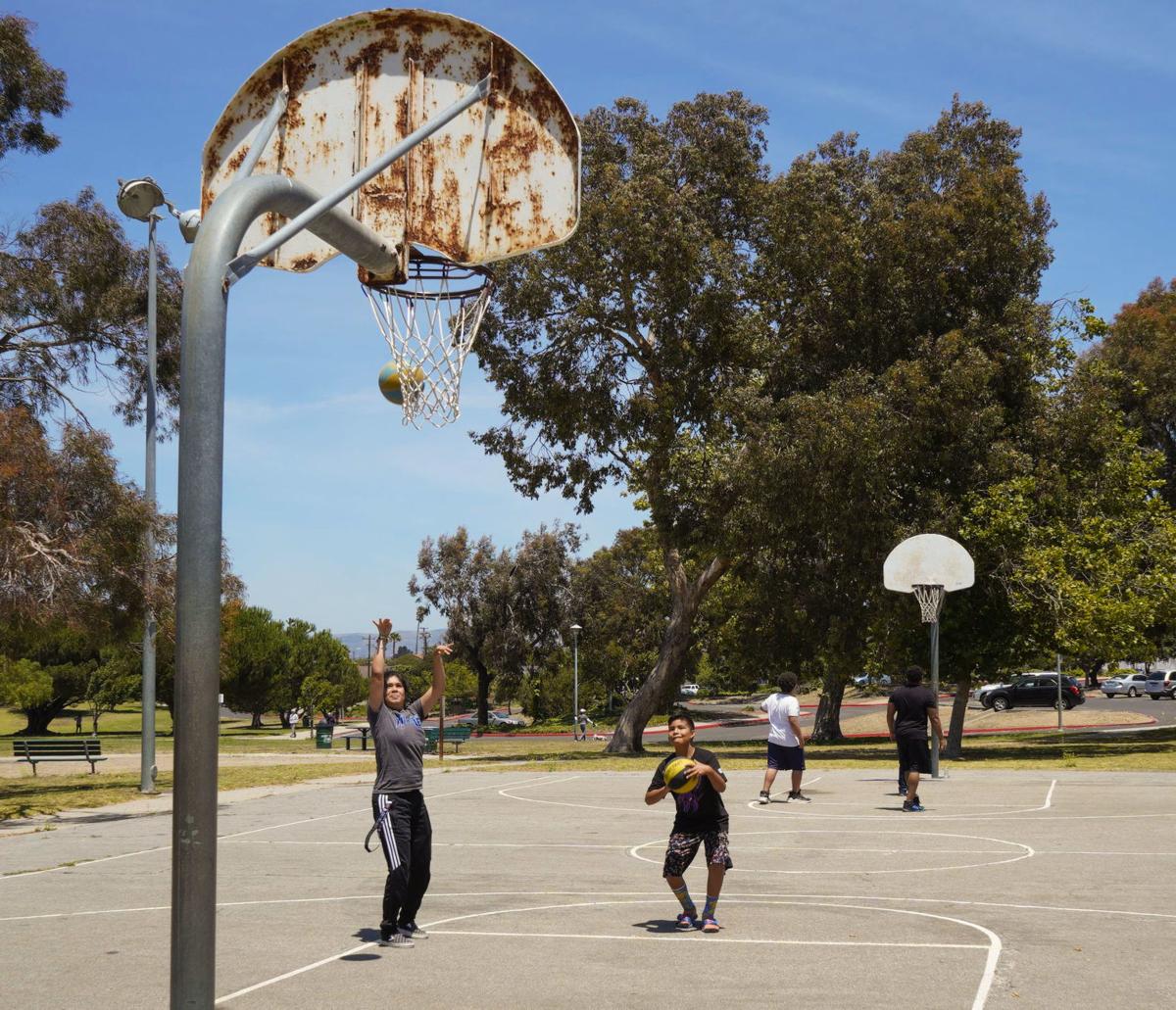 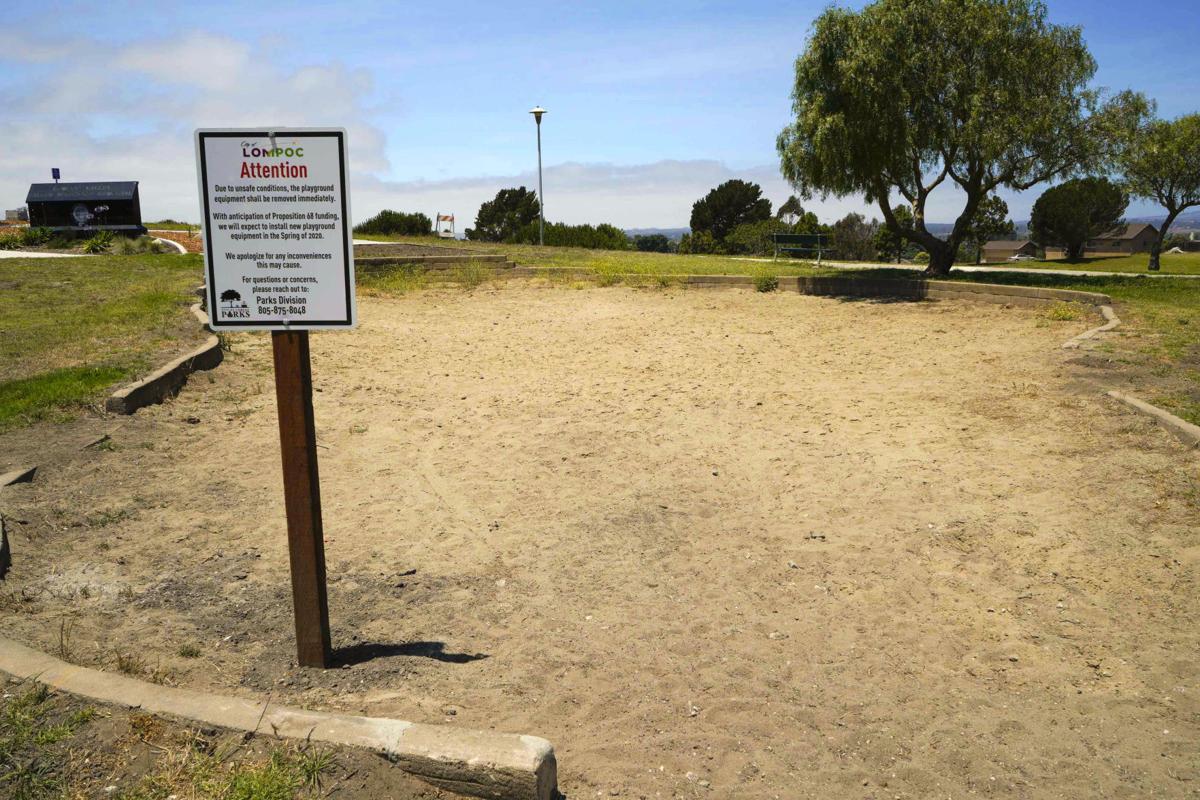 Dirt remains in an area that once held playground equipment at Beattie Park in Lompoc. 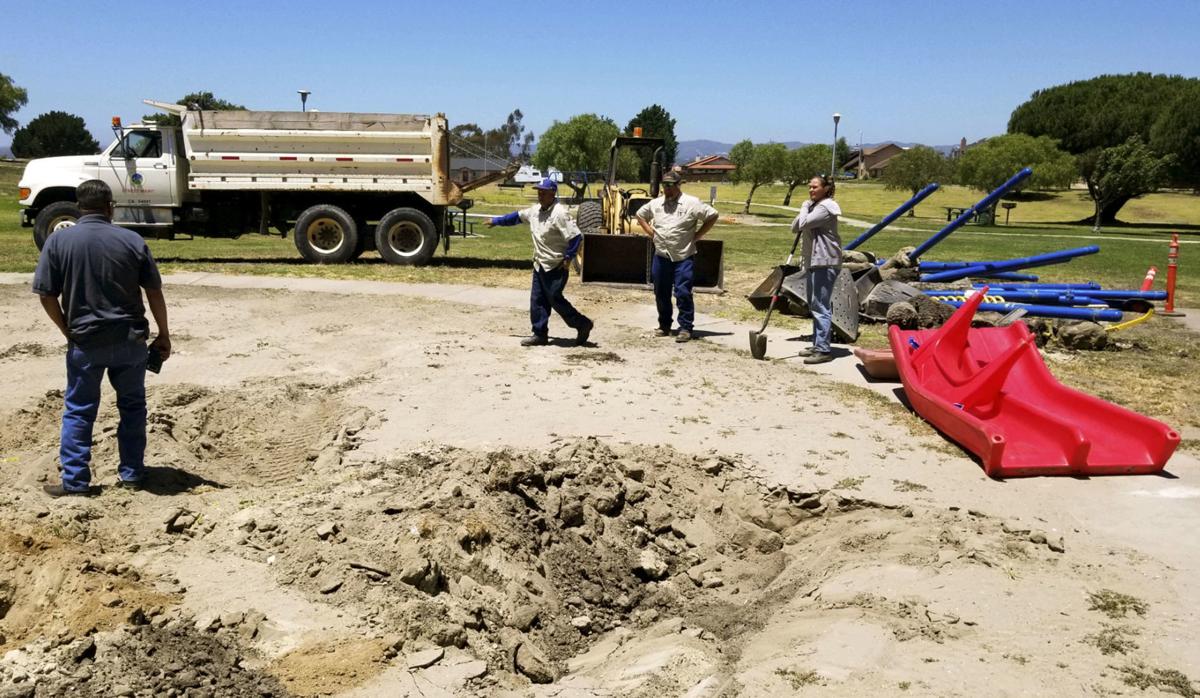 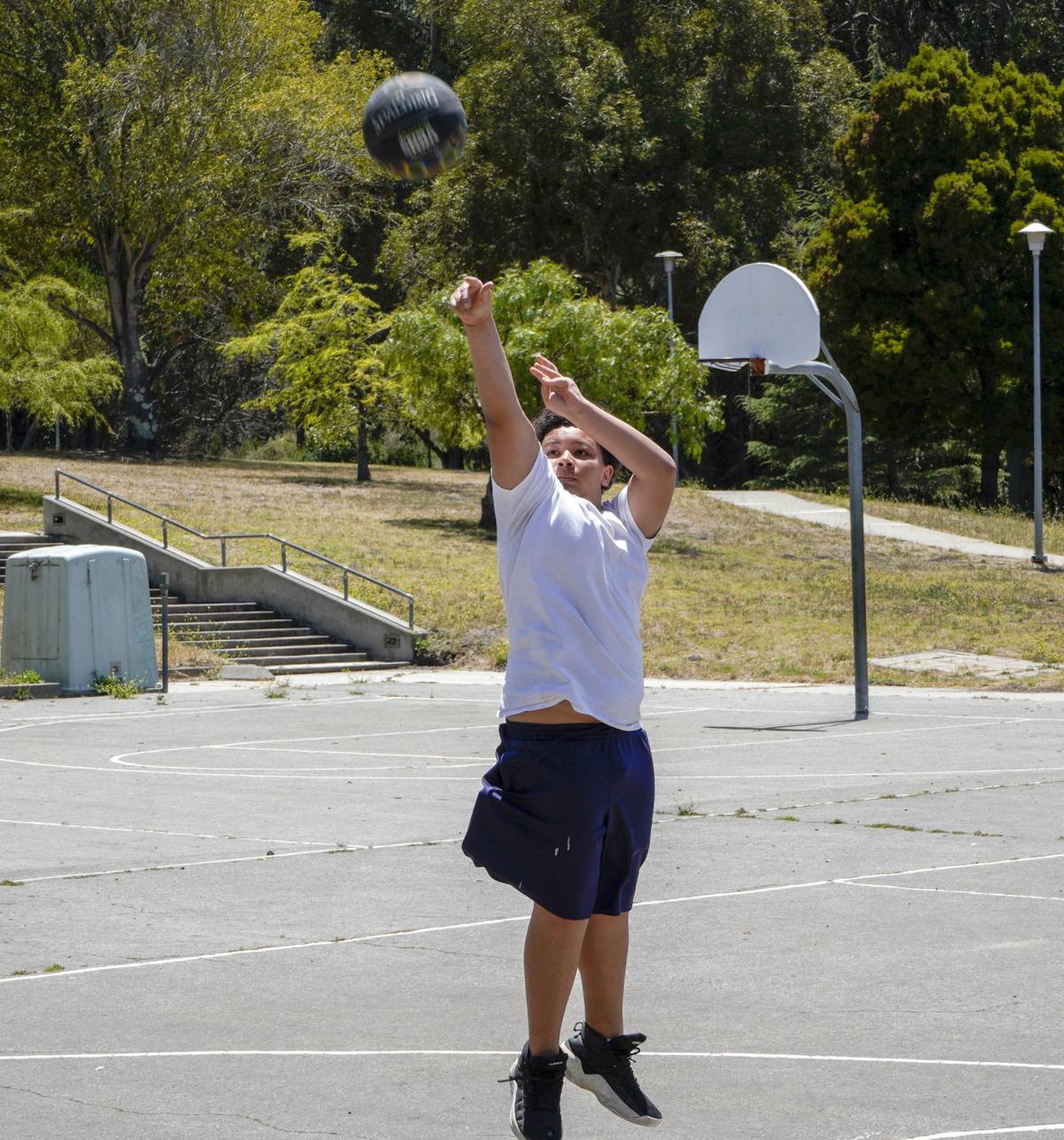 Jovoni Green, 9, of Lompoc, shoots baskets at Beattie Park in Lompoc. New playground equipment is expected to be installed at the park in 2020.

Lompoc leaders are planning to spruce up some of the city’s parks with millions of dollars in state grant funds, and community members are encouraged to let them know what types of upgrades they’d like to see.

City officials are preparing to apply for up to $10 million from the state’s Proposition 68 fund to provide updates at Johns-Manville and Pioneer parks. Prop 68 is a $4 billion bond referendum that was passed by California voters in June 2018 to fund park projects, among other things, in low-income neighborhoods.

Lompoc will seek $4 million to $5 million for each of those two parks, according to Lompoc Recreation Manager Mario Guerrero Jr. The deadline to apply for that funding is Aug. 5. If the grant applications are approved, the city could receive the money as soon as January, Guerrero said.

To develop plans on how to most effectively use the money, the city has created an online survey — accessible at www.surveymonkey.com/r/DQTRVSX — and also held community meetings in early July. Community members are encouraged to complete the survey and/or reach out to city officials with ideas or suggestions.

“The community meetings have been very helpful,” Guerrero said Tuesday. “Community feedback from the meetings has included suggestions for new playground equipment that can be used by those of all ability levels, as well as new fitness equipment. Community members also asked for nice landscaping with security lighting throughout the park.”

Other plans being considered at the parks include the installation of new concession stands, restrooms, baseball fencing/netting, sod, gopher wire and brick dust, score booths and dugouts, as well as improved landscaping.

In addition to those parks, the city will seek Prop 68 funds — through a different, per-capita process — to provide upgrades at Beattie Park.

While the Beattie Park funding wouldn’t be available until spring 2020 at the soonest, work has already begun at the 50-acre park. This month, city crews removed the park’s playground equipment, some of which was broken or otherwise in a state of disrepair.

If the state funding is approved for Beattie Park, at least some of the funds will be used to purchase and install new playground equipment, according to a city spokeswoman.

“Public involvement will be sought throughout the Beattie Park improvement process,” said Samantha Scroggin, the city’s public information officer, in an update to the community on the Prop 68 grant process.

Anyone seeking information on the process, or wanting to share concerns or ideas with city leaders, is encouraged to contact Guerrero at 805-875-8095.

Dirk Ishiwata, the city of Lompoc’s facilities, fleet and park maintenance manager, has a whiteboard in his office that spans from the floor t…

Community members are encouraged by the city to review detailed information on two different options for the park and then participate in a survey to provide feedback on the choices. The information is available on a Beattie Park Playground and Fitness Equipment Project webpage at: https://www.cityoflompoc.com/government/departments/recreation/beattie-park-playground-and-fitness-equipment-project/-fsiteid-1.

Celeste Craighead, left, 12, and her sister Jade Craighead, 8, both of Sacramento, play soccer near one of the vacant play areas at Beattie Park. Playground equipment has been removed due to its unsafe condition.

Dirt remains in an area that once held playground equipment at Beattie Park in Lompoc.

Jovoni Green, 9, of Lompoc, shoots baskets at Beattie Park in Lompoc. New playground equipment is expected to be installed at the park in 2020.