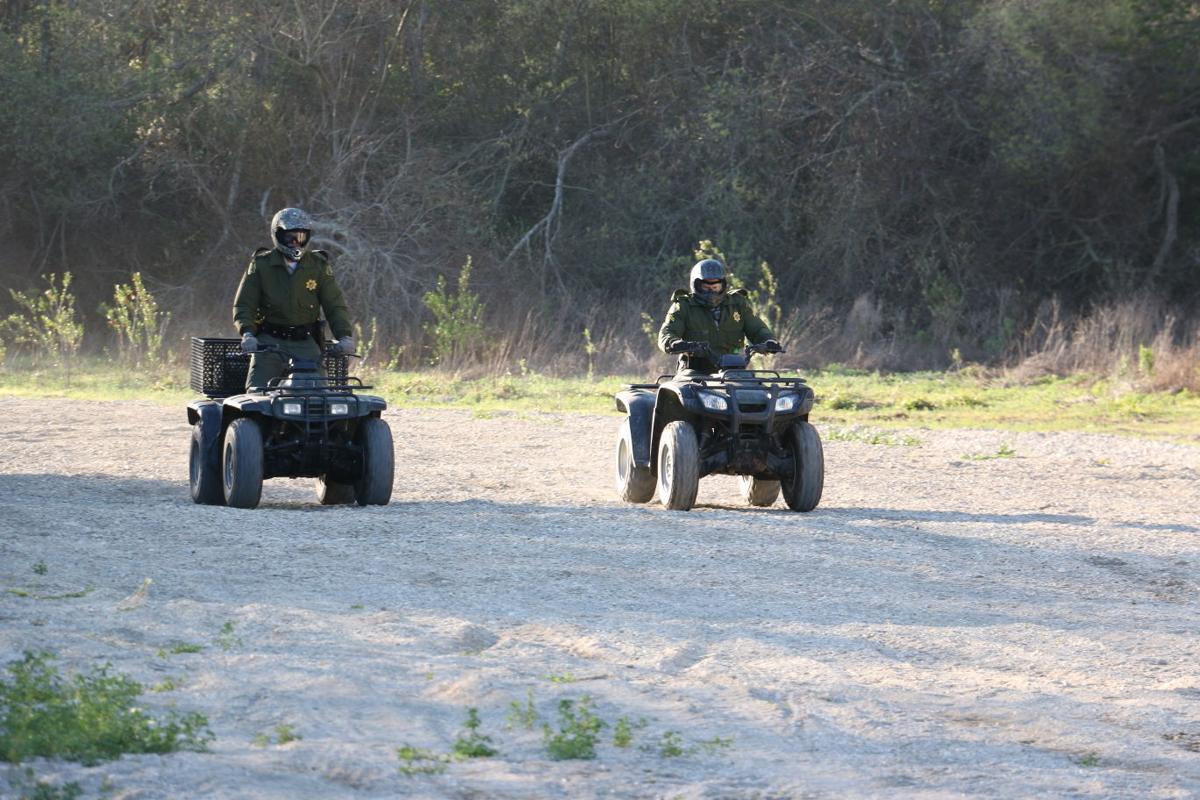 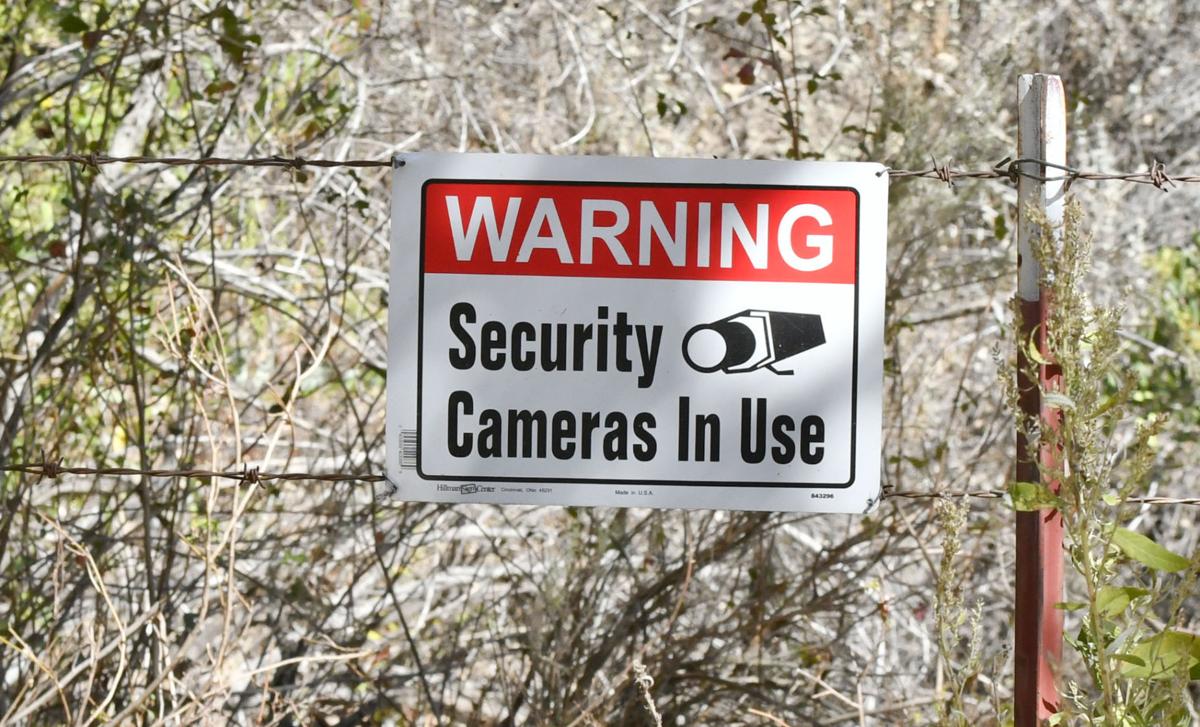 A sign on a barbed wire fence on a dirt portion of Tespusquet Road warns trespassers about security cameras. Cultivators are employing surveillance methods to ensure their cannabis crops and equipment are not stolen. 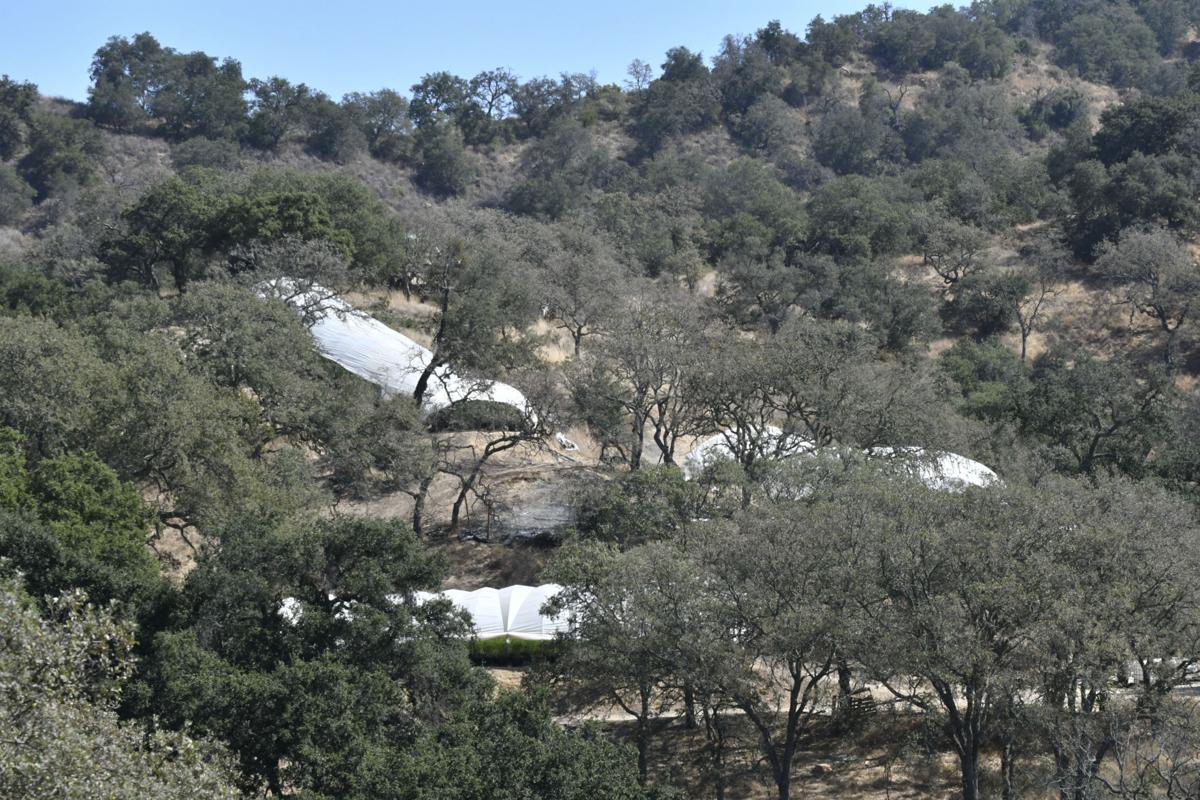 Marijuana grows in hoop houses off Tepusquet Road, northeast of Santa Maria, in October. As more of the high-dollar crop is planted, more opportunities will exist for thieves looking to make a quick buck, according to sheriff's officials.

The day after Christmas, a cannabis growing operation in Carpinteria was hit by thieves who made off with plants as well as harvested marijuana, an example of what could become a growing problem for cultivators.

About 9 a.m. Tuesday, deputies from the Coastal Division were called to investigate a report of trespassing and vandalism at an orchard, but when they arrived they discovered the perpetrators had only entered the orchard in order to cut a hole in a fence and gain entry to an adjacent marijuana farm.

Deputies contacted the cultivator, who confirmed a burglary had taken place and provided a list of missing items.

That afternoon, the investigation led deputies to a motel and two suspects — a Ventura man and San Diego woman — allegedly in possession of methamphetamine and drug paraphernalia, which resulted in their arrest and a subsequent search of their possessions and vehicle.

That search allegedly yielded about 50 pounds of plants and marijuana as well as other items stolen from the cannabis farm, plus burglary tools, a Sheriff’s Office spokesman said.

The two were booked into County Jail on suspicion of conspiracy, vandalism, burglary and possession of stolen property, burglary tools, a controlled substance and drug paraphernalia, with bail set at $20,000 each.

Items they’d allegedly stolen were returned to the grower in a rapid resolution to crime that can take weeks or months to be solved, if ever.

As more of the high-dollar crop is planted in 2018, more opportunities will exist for thieves looking to make a quick buck, sheriff’s officials said.

Senior Deputy John McCarthy, who has worked on rural crime for nearly 20 years with the Santa Barbara County Sheriff’s Office and has been assigned to the Rural Crime Unit full time for about 10, said most crimes involving cannabis operations are investigated as narcotics crimes rather than agricultural crimes, which are his focus.

McCarthy investigates between 100 and 160 rural crimes a year throughout the county, assisted by 15 to 20 deputies who are on collateral assignment but generally work patrol, although some of them have been through rural crime school.

The most common crime McCarthy deals with is the theft of equipment — water pumps, irrigation lines, tractors and, more recently, tractor batteries.

“If it’s not nailed down or it is nailed down, it will get stolen,” he said, and that includes crops and livestock.

Some of what’s stolen from farms and ranches ends up on illegal marijuana operations.

“We’ll see an increase in the theft of chemicals and drip irrigation lines at the start of the marijuana season,” McCarthy said. “That will be taken out into the backcountry for the illicit grows.”

But cannabis growers themselves, like the one in Carpinteria, can become the targets of thieves.

“Plants will get ripped off sometimes,” McCarthy added.

As more cannabis farms come online and the use of the weed becomes more widespread, McCarthy said he expects to see an increase in such crimes, which will likely shift investigations from the Narcotics Unit to the Rural Crime Unit.

“I think we’ll see an increase in theft from grows,” he said. “Eventually, it will be considered a cash crop, and then it will become an agricultural crime.”

Farms not the only targets

Guarding valuable plants in the field is just one of the crime and safety issues raised by the legalization of cannabis.

Because marijuana is still illegal at the federal level, most banks, which are federally regulated and insured, won’t allow cannabis growers, processors and dispensaries to open accounts, which puts the cannabis industry in the position of dealing strictly in cash.

Recent studies have indicated as many as three-quarters of medical marijuana operations don’t have bank accounts.

So operators receive cash for the cannabis they sell, must store that cash somewhere and must use it to pay for everything from supplies and salaries to utility bills and even taxes.

Medical marijuana will become tax-exempt in 2018, but recreational cannabis will be subject to not only state but county taxes.

Under Proposition 64, the state excise tax on retail recreational marijuana will be 15 percent, which the Legislative Analyst’s Office estimates will result in about $1 billion a year in revenues. But once county taxes are added, cannabis operations could be looking at rates of 30 to 35 percent.

The Santa Barbara County Board of Supervisors wants to establish a local rate that will hold the overall assessment at 30 percent.

County officials believe that a 2-percent rate on gross receipts could result in $8 million in revenue a year, while a rate of 6 percent could yield $24 million. In addition, cannabis operations will have to pay licensing fees.

The county will have to collect all that in cash, creating security issues for county employees as well as the cannabis operators.

The California Department of Tax and Fee Administration, formerly the State Board of Equalization, collects taxes and redistributes them, and officials say large cash payments are being made by medical marijuana operations at regional offices not equipped to handle such sums.

Khurshid Khoja, general counsel of the California Cannabis Industry Association, recently related how a dispensary testing agent was attacked inside his lab by a man armed with a hammer. Another man involved in a cannabis operation was kidnapped and driven out into the desert, where he was tortured to force him to give up the location of his money.

Credit unions that aren’t under the federal umbrella are more likely to work with cannabis operations, and one credit union in Washington uses an armored car service to collect cannabis cash, which costs more but keeps the community safer.

California has set up a Cannabis Banking Working Group to see if a state bank for cannabis operations is feasible, but in the meantime, those in the industry are on their own.

That may, in part, be behind anecdotal reports from some Tepusquet residents that guards armed with assault rifles and vicious dogs have been seen patrolling marijuana farms.

McCarthy said he’s only heard of armed guards on the illicit backcountry grows operated by drug cartels, not legitimate grows.

Law enforcement officials may have another issue to deal with as well — the potential for the marijuana black market to continue and possibly even expand, which would be the exact opposite of what Prop. 64 proponents hoped to accomplish by making cannabis a legal commodity.

The problem is that in addition to being in a cash-only business, cannabis operators are faced with the red tape and costs to become licensed and legal, prompting some to operate illegally and sell their product on the black market.

Cannabis sold on the black market won’t be tested for quality and purity and it won’t be taxed, putting an additional burden on the county budget for unfunded enforcement efforts.

Analysts have estimated that 40 percent of the cannabis sold in Colorado is traded on the black market even though it’s legal there.

And, if the black market flourishes in California despite legalization, it’s also likely that drug cartels will continue to smuggle marijuana into the country aboard panga boats, which are often found abandoned along the Central Coast shoreline after their loads of pot have been offloaded.

Lee President's Award - Green Rush in the 805?: Cannabis on the Central Coast - Looking at land use, money, science, law enforcement and education

A Santa Maria woman was charged with trafficking firearms for the Aryan Brotherhood gang Friday following a federal multi-agency sting operation that yielded more than 60 arrests across three states.

3 minor injuries reported after vehicle goes over side of Hwy 166, east of Santa Maria

Three people were injured Friday morning after their vehicle drove over the side of Highway 166, east of Santa Maria.

Santa Barbara County sheriff’s investigators are looking for a man who sexually assaulted a female hiker Nov. 8 on the Aliso Trail in Santa Yn…

A murder charge and three enhancements were upheld against a Santa Maria woman accused of killing a 53-year-old man and tossing his dismembered remains in a Nipomo golf course pond in 2018.

Three female agricultural workers received minor injuries after a Ford Ranger truck went off the road and struck them in a field near the Santa Maria landfill Tuesday.

Customers in Santa Barbara County to get renewable electricity in January

Three men and eight juveniles were arrested on suspicion of illegally using firearms following several reports of shootings in Lompoc since October amid a recent uptick in gang-related crimes.

The news of Newsom's dinner at the French Laundry only strengthened Miguel Aguilar's resolve. “Yes, we all make mistakes, but his apology was pathetic,” Aguilar, founder and owner of Self Made Training Facility, said. “He told us he was outdoors, but then the photos surfaced.”

A sign on a barbed wire fence on a dirt portion of Tespusquet Road warns trespassers about security cameras. Cultivators are employing surveillance methods to ensure their cannabis crops and equipment are not stolen.

Marijuana grows in hoop houses off Tepusquet Road, northeast of Santa Maria, in October. As more of the high-dollar crop is planted, more opportunities will exist for thieves looking to make a quick buck, according to sheriff's officials.