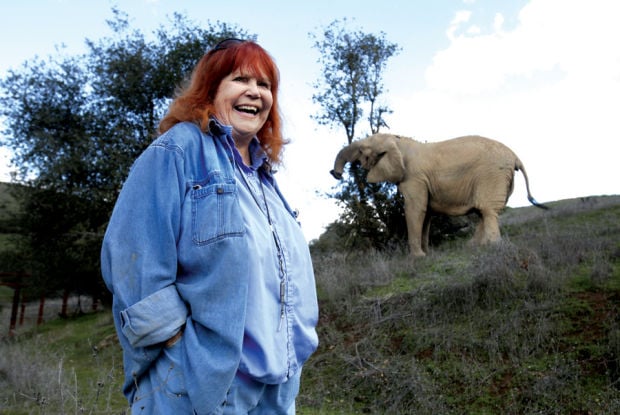 In this 2009 file photo, Pat Derby, founder and director of the Performing Animals Welfare Society, is seen at the ARK 2000 Sanctuary near San Andreas. Derby, a former Hollywood trainer for Flipper, Lassie and other performing animals, later devoted her life to protecting them after seeing widespread abuse. She died at age 69. 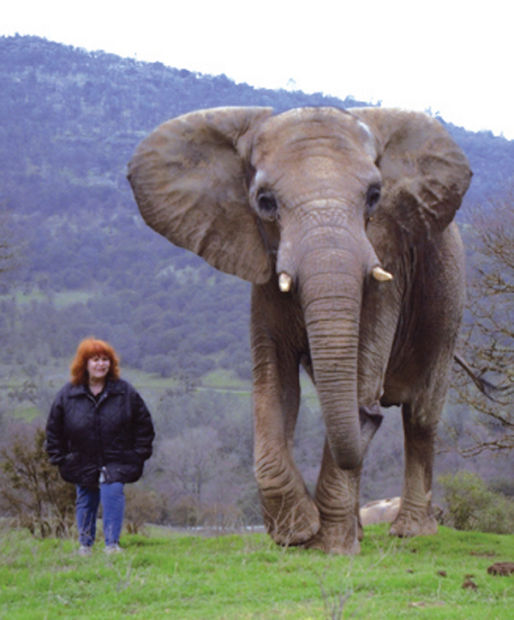 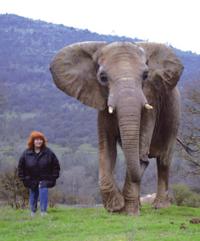 Pat Derby’s first love was elephants. She is seen with her beloved elephant called 71. 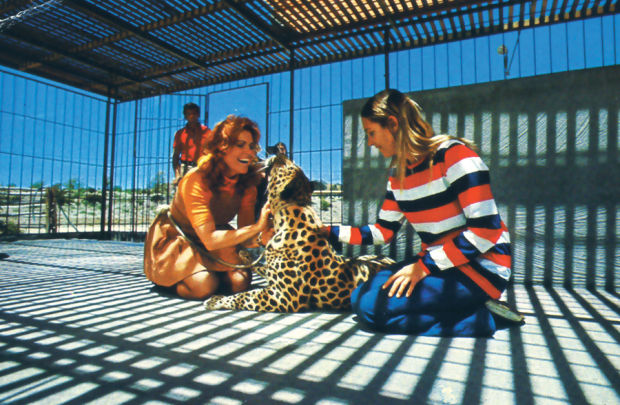 Derby poses with a leopard and assistant. 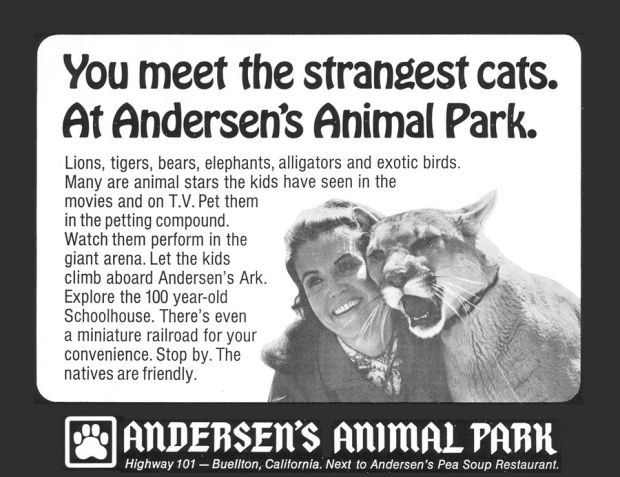 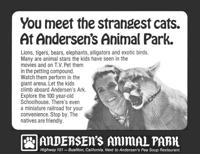 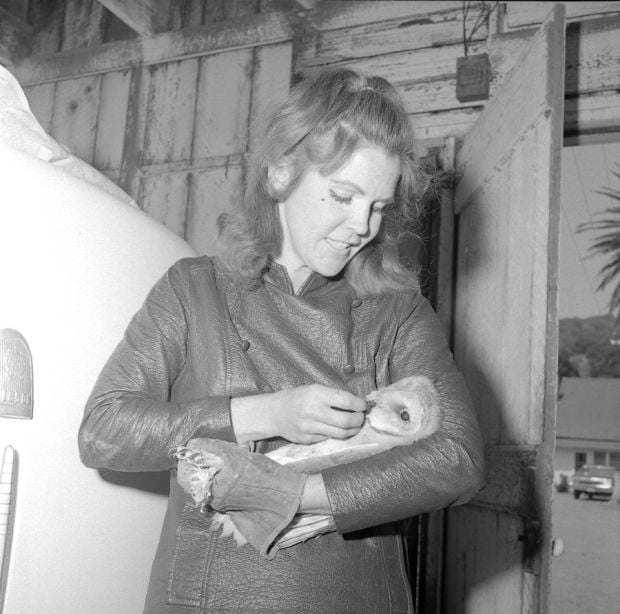 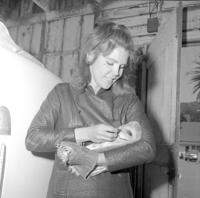 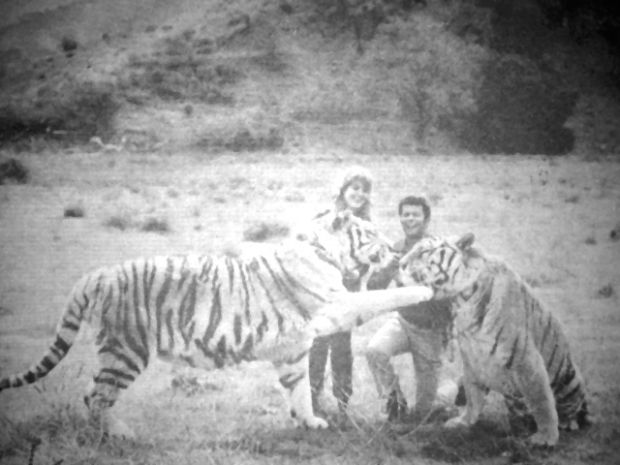 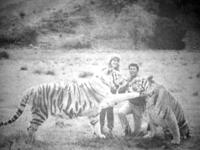 In this 2009 file photo, Pat Derby, founder and director of the Performing Animals Welfare Society, is seen at the ARK 2000 Sanctuary near San Andreas. Derby, a former Hollywood trainer for Flipper, Lassie and other performing animals, later devoted her life to protecting them after seeing widespread abuse. She died at age 69.

Pat Derby’s first love was elephants. She is seen with her beloved elephant called 71.

Derby poses with a leopard and assistant.

When Pat Derby, a world-renowned animal trainer turned animal activist, died this month, widely circulated news accounts identified her as the woman who had trained Lassie and other famous animals and then decided to speak out against the use of performing animals because of the way she saw them being treated in Hollywood.

What wasn’t said was that Derby had a prominent history in Buellton.

In the late 1960s, she and her then-husband, another animal trainer named Ted Derby, moved to Buellton and opened Andersen’s Animal Park, next to Pea Soup Andersen’s restaurant, where they performed with two Siberian tigers, Boris and Rijo; a Canadian timber wolf named Nehani; a lion named Lucky; and a menagerie of exotic animals.

She went on to become the president and co-founder of the Performing Animal Welfare Society (PAWS).

“The great sorrow I have for the loss of one of the greatest women I have ever met is almost beyond words,” said C.C. Beaudette-Wellman, owner of Happy Endings Animal Rescue Sanctuary in Santa Ynez. “I used to kid her and tell her it was all her fault I have dedicated my life to animals. It was all her fault I learned what loving unconditionally really meant. Learning there was no fear in love.

“She took me under her wing when I was a teen and nurtured the fire that God had put in my heart for animals. That was back in some very dark days in Buellton for her, yet she always had time for me. I often felt she considered me one of the many wild babies she raised!” Wellman said.

“I have always tried to repay her by teaching other kids the lessons she taught me about love and the strength that comes with it. She will always be my hero, mentor, and I am so honored to have called her friend.”

According to PAWS, Derby was the first to champion the cause of performing animals, and today, because of her tireless work and fierce determination, most animal protection organizations have captive wildlife programs that address the issues of performing animals. She also built the first elephant sanctuary in the United States.

The group said Derby’s advocacy for animals began more than 36 years ago when she began working with captive wildlife as a Hollywood animal trainer in movies and television commercials along with her husband.

She was the trainer and spokesperson for the famed Lincoln Mercury “Sign of the Cat” cougars, Chauncey and Christopher, at that time one of the most recognized advertising symbols in the world. While working on television series such as Gunsmoke, Lassie, Daktari and Flipper, she witnessed neglect and abuse prevalent in animal training.

Determined to bring attention to the problem, and to initiate better standards of care for performing animals, Derby chronicled her adventures in her first book, written with Peter S. Beagle, titled “The Lady and Her Tiger,” an exposé of the treatment of performing animals.

Following her husband’s death in 1974, Derby met Stewart in 1976, and the two spent the next few years promoting “The Lady & Her Tiger” with television appearances on the Today Show, the Tonight Show,

The Merv Griffin Show and others.

After extensive lecture tours for national humane societies, the two were persuaded to form their own organization to protect performing animals and captive wildlife. They formed the Performing Animal Welfare Society (PAWS) in 1984.

In 1985, Derby and Stewart moved to Galt, a small town south of Sacramento. They immediately began lobbying for state standards for the care of captive wildlife. That year their first bill, AB 1620, was signed into law. Because of what they felt was a critical need for experienced care providers for abused and abandoned captive wildlife, they opened their first wildlife sanctuary, in Galt, that year.

PAWS’ ARK 2000 is home to lions, tigers, bears and elephants, and is the only sanctuary in the country to house bull elephants.

PAWS also investigates reports of abused performing and exotic animals, documents cruelty, and assists in investigations and prosecutions by regulatory agencies to alleviate the suffering of captive wildlife.

As a recognized expert on the care of captive wildlife, Derby testified before Congress twice and served on several state committees setting standards for the care and handling of elephants and other exotic species. She was a charter member of the California Department of Fish and Game’s Committee for the Humane Care of Captive Wildlife.

When PAWS opened the first elephant sanctuary in the United States, Derby and Stewart pioneered a method of elephant handling that uses no bull hooks, weapons or aversive training techniques.

For more information about PAWS, visit www.pawsweb.org or the group’s YouTube channel.