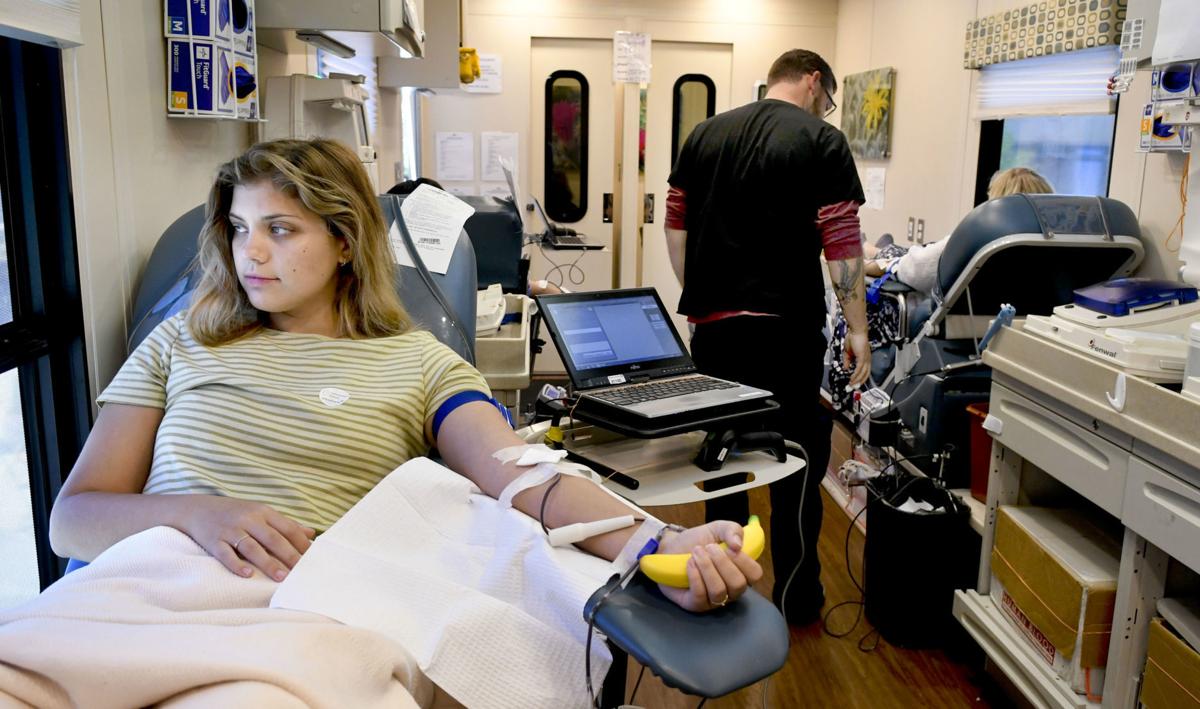 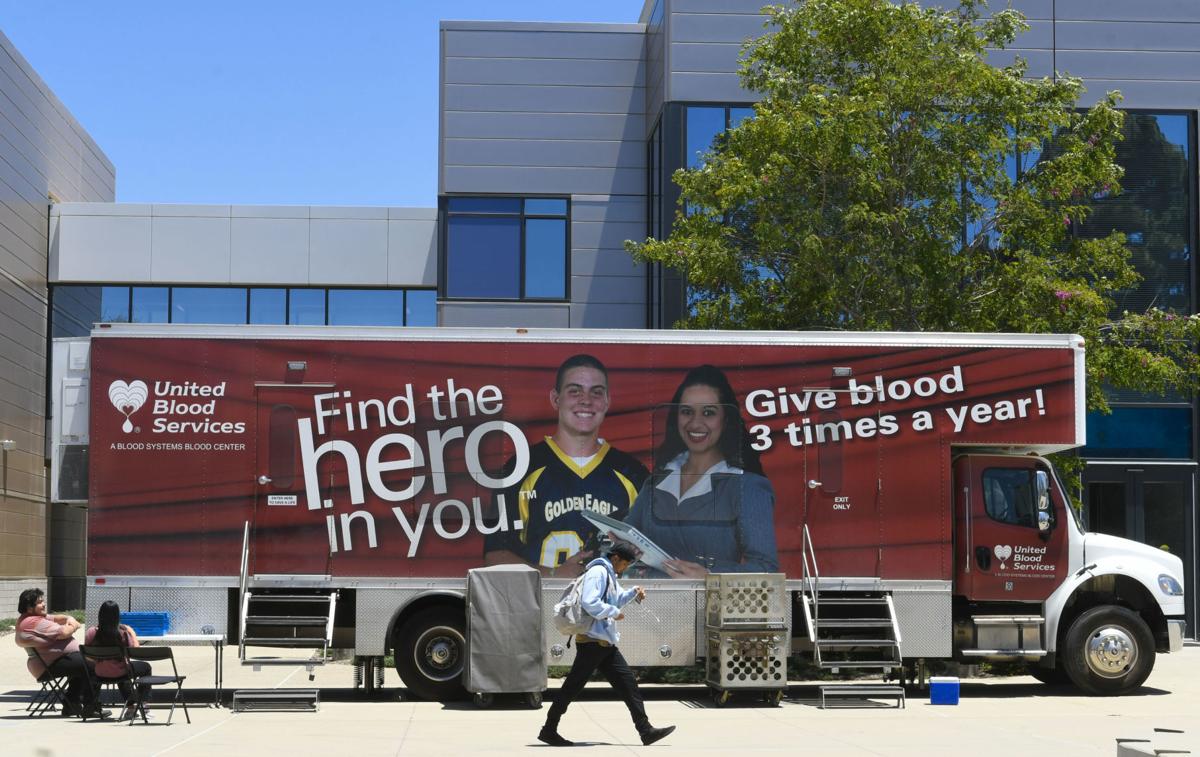 The Vitalant blood donation van is parked outside the student center during a blood drive Tuesday at Hancock College. 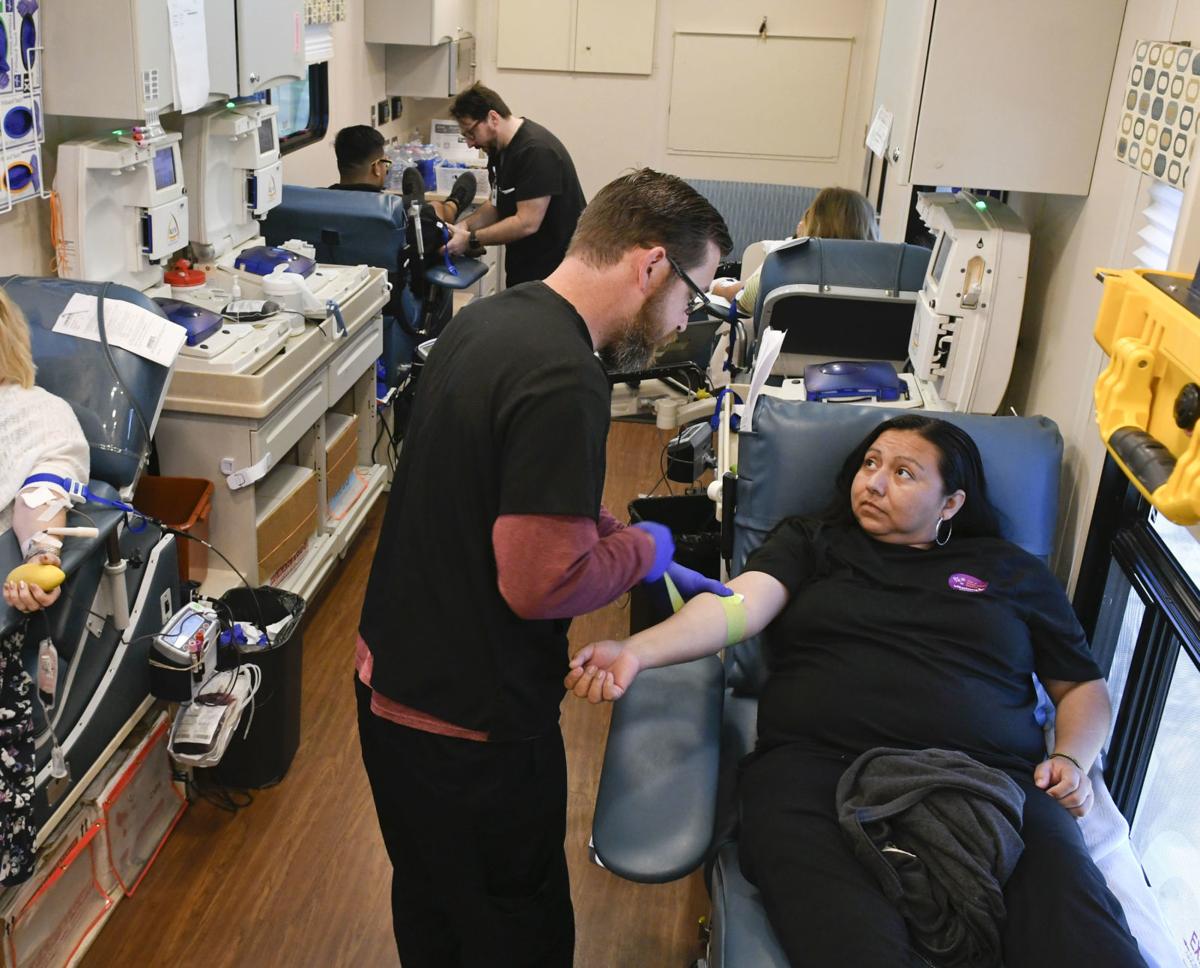 Vitalant had never set up a blood donation drive during the summer at Hancock College until Tuesday came along.

But recent incidents at the Oceano Dunes State Vehicular Recreation Area helped prompt the nonprofit blood supply organization in Santa Maria to seek blood donations on the eve of the Fourth of July.

“There are people out on those dunes flipping over and driving into the water — doing that stuff,” said seven-year Vitalant employee Mark Eichenberg, who manned the donation booth. “[The blood] can go there.”

O-negative blood can be given to people with any blood type, so it's known as the "universal blood type," but all types of blood are needed.

Platelet donations are also always needed, because platelets have a shelf life of only five days.

Walk-in donations are welcome, but appointments are recommended. To make an appointment, visit vitalant.org or call 805-542-8500.

Vitalant marketing manager Sergio Coppa added by phone: “I think [the deaths and injuries at the dunes in 2019] was a primary reason to have [the drive] during the summer.”

The nonprofit community blood service provider brought a blood donation van and booth to the front of the college's Rabobank Student Center from 10 a.m. to 3 p.m., taking in donations from appointments made via phone and online, as well as walk-in donors.

Eichenberg and Coppa, though, said they believe the week of Fourth of July is a prime opportunity to save a life.

“This blood will also go anywhere in the U.S.,” said Eichenberg, who gave away free T-shirts that read “Make Everyday Awesome” to people who gave blood at Hancock.

Coppa added that Vitalant doesn’t want to wait until the fall or spring to conduct blood donation drives at select cities on the Central Coast.

“We try to do something in the summer when there’s fun going on,” Coppa said. “This week is really challenging with vacations and traveling. We’re in need of donations always.”

Eichenberg, who had 22 appointments scheduled before noon, said he loves operating out of the Hancock location.

“Hancock is solid. They always do a great job,” Eichenberg said. “What we were concerned with was we usually don’t do blood drives at Hancock in the summer. We do it during the school year.

"But it’s so nice," he said. "We have a little bit more of a smaller contingent, but it’s more manageable. The nicest people have come to donate blood.”

Hancock College student Dominic Perkins, 20, saw Tuesday morning as a prime opportunity to donate his blood to someone else.

He donated just by walking up to the Vitalant booth.

“I got an email from [Hancock] yesterday,” said Perkins, who aspires to become a male nurse. "The appointments were full, but I had a morning class and they said they opened at 10. I walked in and they had two open spots [near noon].

“During the Fourth of July, plus being from a military family, there was a lot of interest in donating blood.”

Chloe Ackels, 20, showed up before her afternoon class to donate blood.

She said she takes pride in the fact that her blood will go toward someone in need during this holiday week.

“That’s the reason you want to come out and do it,” Ackels said.

Vitalant is urging both existing and first-time donors of all blood types to visit vitalant.org or call 805-542-8500 to schedule an appointment at one of the four donor centers on the Central Coast, which include San Luis Obispo, Santa Barbara and Ventura, or at a mobile blood drive.

Walk-ins are welcome at any of the locations, Vitalant officials said.

The California Coastal Commission voted 8-2 Thursday to defer a recommended ban on off-road vehicles at the Oceano Dunes for one year, while i…

The Vitalant blood donation van is parked outside the student center during a blood drive Tuesday at Hancock College.