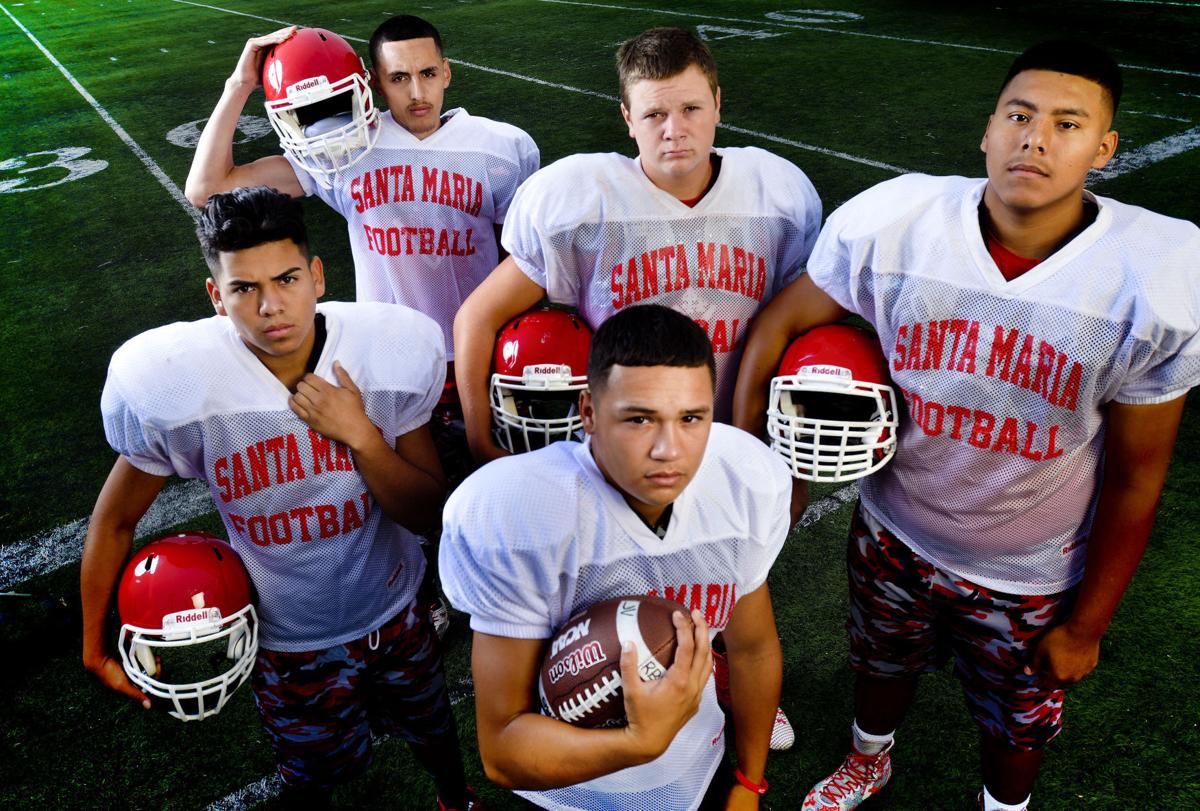 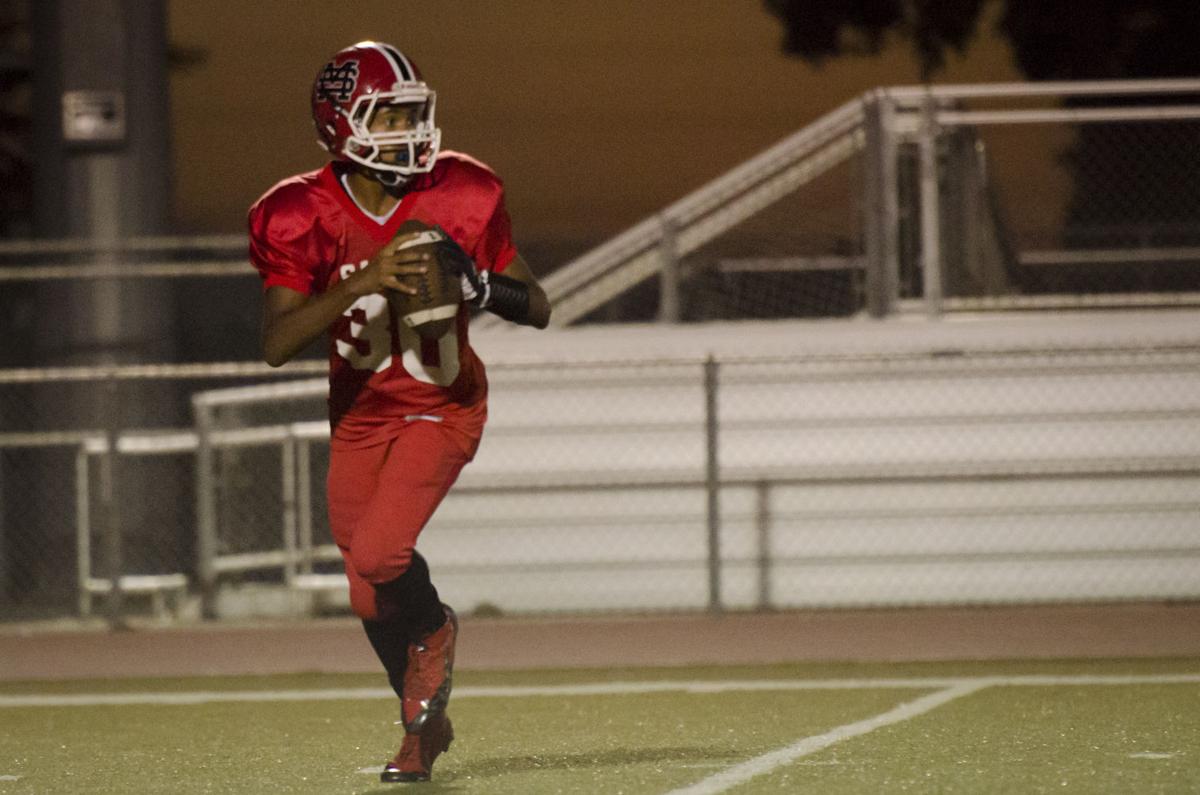 Santa Maria's Jonathan Ramos did just about everything for the Saints as a sophomore in 2015, playing in the middle of the defense while also earning some playing time at quarterback, receiver and running back. Saints coach Dan Ellington expects him to have a bigger impact in 2016. 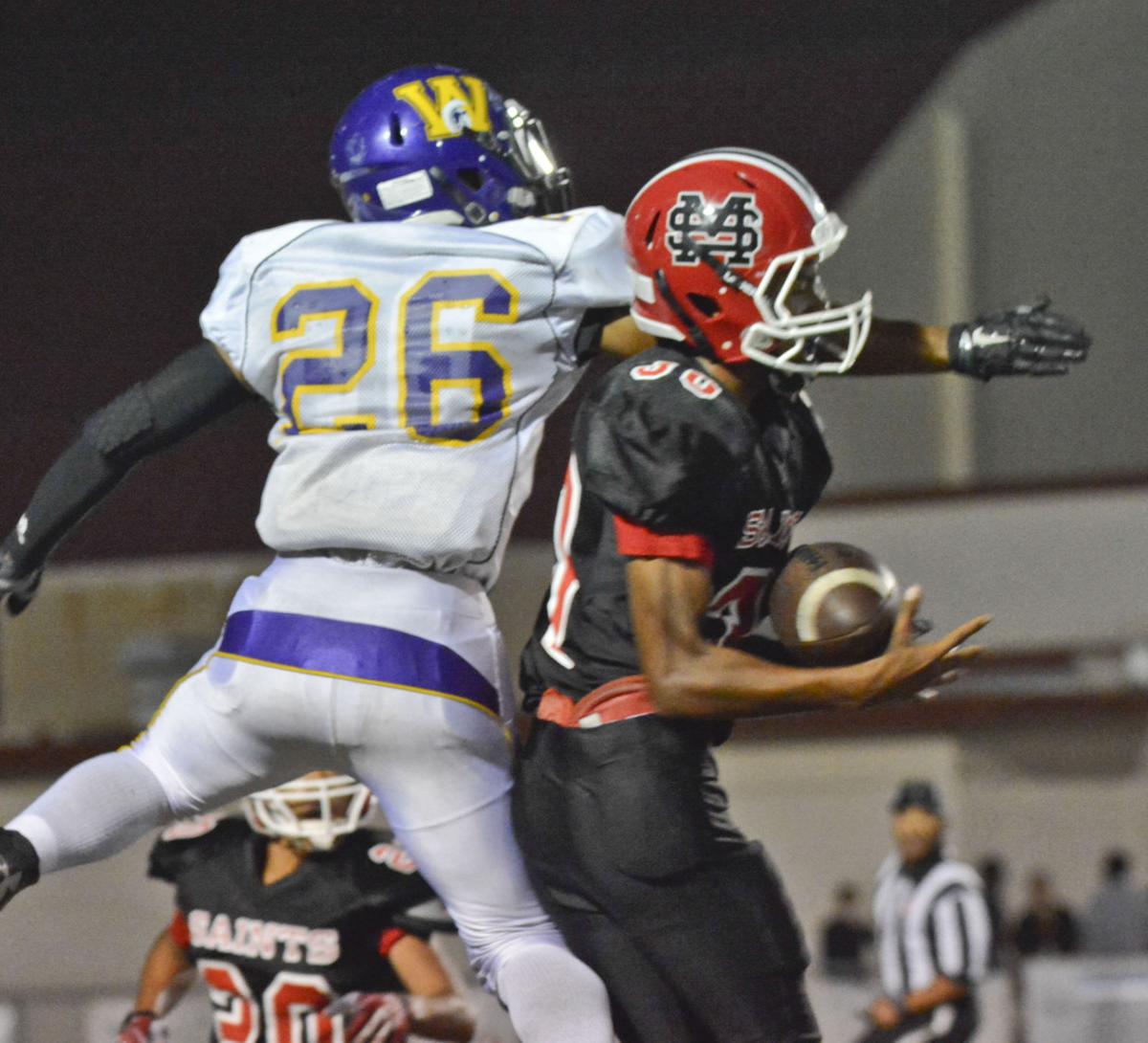 Santa Maria's Jonathan Ramos, right, intercepts a pass intended for Righetti's Deandre Thomas in September of 2015. Ramos missed almost all of his junior season with a knee injury. He's back for the Saints, though, and is No. 24 on the Central Coast 60. 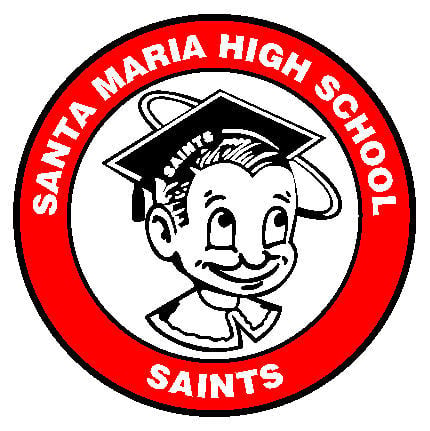 The Saints are ready for some football.

Santa Maria High School is expecting a big 2016 season on the gridiron.

Coach Dan Ellington firmly believes he has a team that can go a long way this year.

“I think we’re going to be an above .500 team and we’re going to challenge for a league title,” said Ellington at the Times’ recent football Media Day.

In his second season as the Saints’ head coach, Ellington feels he has the pieces in place to build a winner.

“It’s been a challenge, I’m not going to lie,” said Ellington. “Trying to build a program over here has been challenging but at this point it is so much better than last year. I’m really excited.”

Last year the Saints went 2-8, with one of those wins coming after a Cabrillo forfeit.

The Saints later shocked Morro Bay 31-7 in a Northern League matchup, a win that gave Ellington a reason to be optimistic as he looked ahead to the 2016 season.

“Without consistency you don’t have much. We’re trying to build a program here. These past few years, the kids have gone through four or five head coaches and you don’t really build consistency with that,” said Ellington.

“The talent is here, it’s just that consistency has been our downfall. Hopefully, I’ll be here a few years and we can turn this thing around. We are a million miles ahead of where we were last year.”

The talent begins with two young men who are competing for the starting quarterback spot – Blake Truhitte and Johnny Ramos.

“Both of them can do a really good job,” said Ellington. “Ramos was actually an All-Area outside linebacker for us last year and then Truhitte is an outstanding three-sport kid.”

Ramos has more experience at the varsity level having been a starter on defense throughout the 2015 season. He also spent some time running the Saints’ offense later in the season.

Truhitte has more time at quarterback. He was the junior varsity starter last year.

“We’ll see who’s going to start the first game for us but either one will do a good job for us,” said Ellington.

Isaiah Garcia will be the Saints’ premier running back.

Bobby Ruiz will also see time at running back and on defense.

Ricky Mendoza and Juan Contreras will provide either quarterback with strong receiving targets.

“Isaiah is another good athlete,” said Ellington. “He played for us as a sophomore and we kind of started him slow last year. We didn’t want to just put him back there and see him get beat up. This year he’s gained some weight, got a lot stronger so he’s going to be our main back. Ricky is an outstanding receiver and Juan is another kid who’s going to play well for us. We have some length to our receivers this year and some speed.”

Jonathan Garcia was an All-League offensive tackle last season. He’s back to anchor the line and Elijah Fisher will start at tight end.

“With the talent we have, we’re going to mix it up, we’re not just going to be just a running team,” said Ellington. “We’re going to keep teams on their toes, I’m sure.”

On the other side of the ball, the Saints will run a 4-3 defense.

“We’re going to mix it up but basically we’re going to run an even front,” said Ellington. “Those same kids that I’ve mentioned on offense, along with middle linebacker Jesse Pacheco, are going to be a big part of our defense, too.

“Some years in the past, we’ve been athletic but just couldn’t quite get it done. This year we have the tools to be good and it’s my job to make sure that they’re used properly. We should be good. We should fly around and have an excellent season for us defensively.”

The Saints are in the Northern League along with Nipomo, Morro Bay, Templeton and Mission Prep.

Ellington thinks this group of Saints will give them all a run for their money.

“I think we’ll stack up just fine. We can compete with anyone in our league and there is no reason we can’t compete and win our league – there is just no reason for it.”

And the CIF Southern Section has revamped its football playoff structure.

The Saints are now in Division 12 – the only Central Coast team to be placed in that division.

“For us, we got a great draw because I think we’re a much better team than we have been in the past,” said Ellington. “I believe if we can get into the playoffs, then we have a legitimate chance to go a long ways. That’s just something else to motivate the kids with.”

The Saints open the season on Friday, Aug. 26, with a non-league home game against San Luis Obispo.

2016 Kickoff: Saints a "Million Miles Ahead"

Head Coach Dan Ellington talks to Elliott Stern about this year's Saints, and how he thinks they will finish. Last year the team was undergoin…

Santa Maria's Jonathan Ramos did just about everything for the Saints as a sophomore in 2015, playing in the middle of the defense while also earning some playing time at quarterback, receiver and running back. Saints coach Dan Ellington expects him to have a bigger impact in 2016.

Santa Maria's Jonathan Ramos, right, intercepts a pass intended for Righetti's Deandre Thomas in September of 2015. Ramos missed almost all of his junior season with a knee injury. He's back for the Saints, though, and is No. 24 on the Central Coast 60.