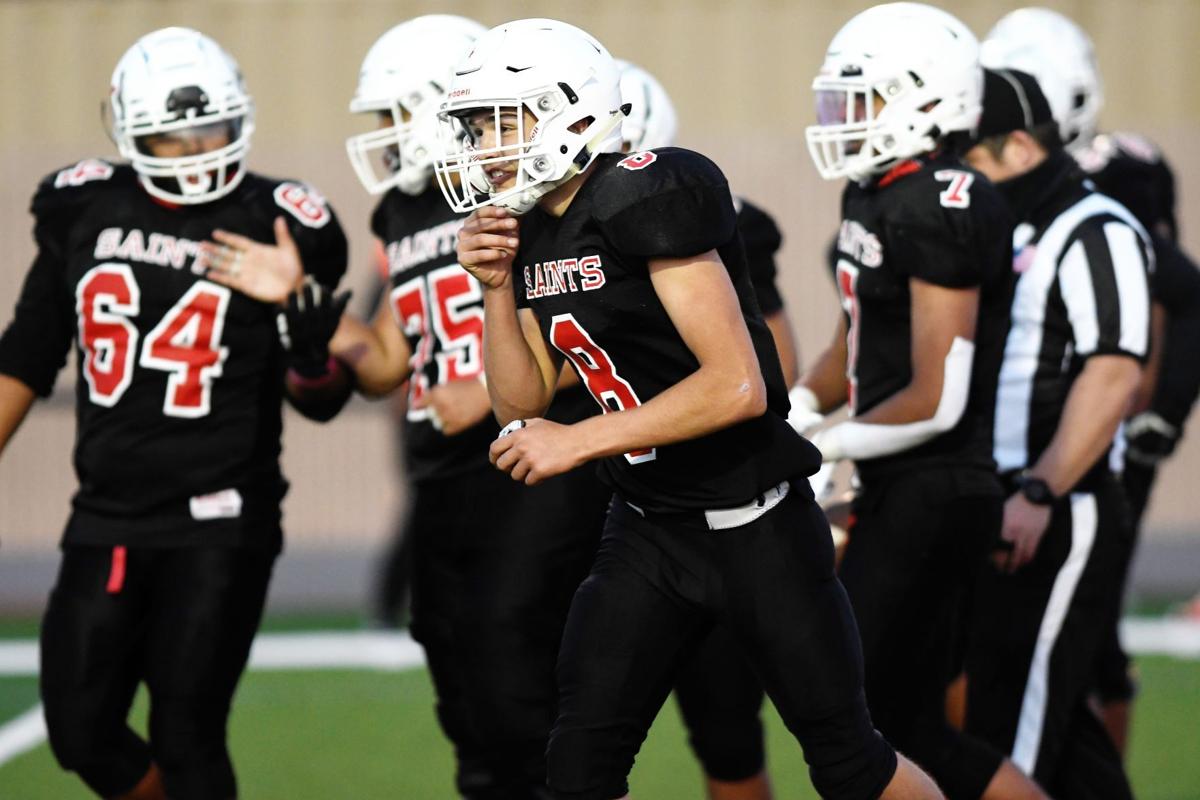 Santa Maria's Nick Martinez (8) has 16 catches for 235 yards and five touchdowns in three games this spring. He caught two touchdowns in last week's 35-0 win over Atascadero. 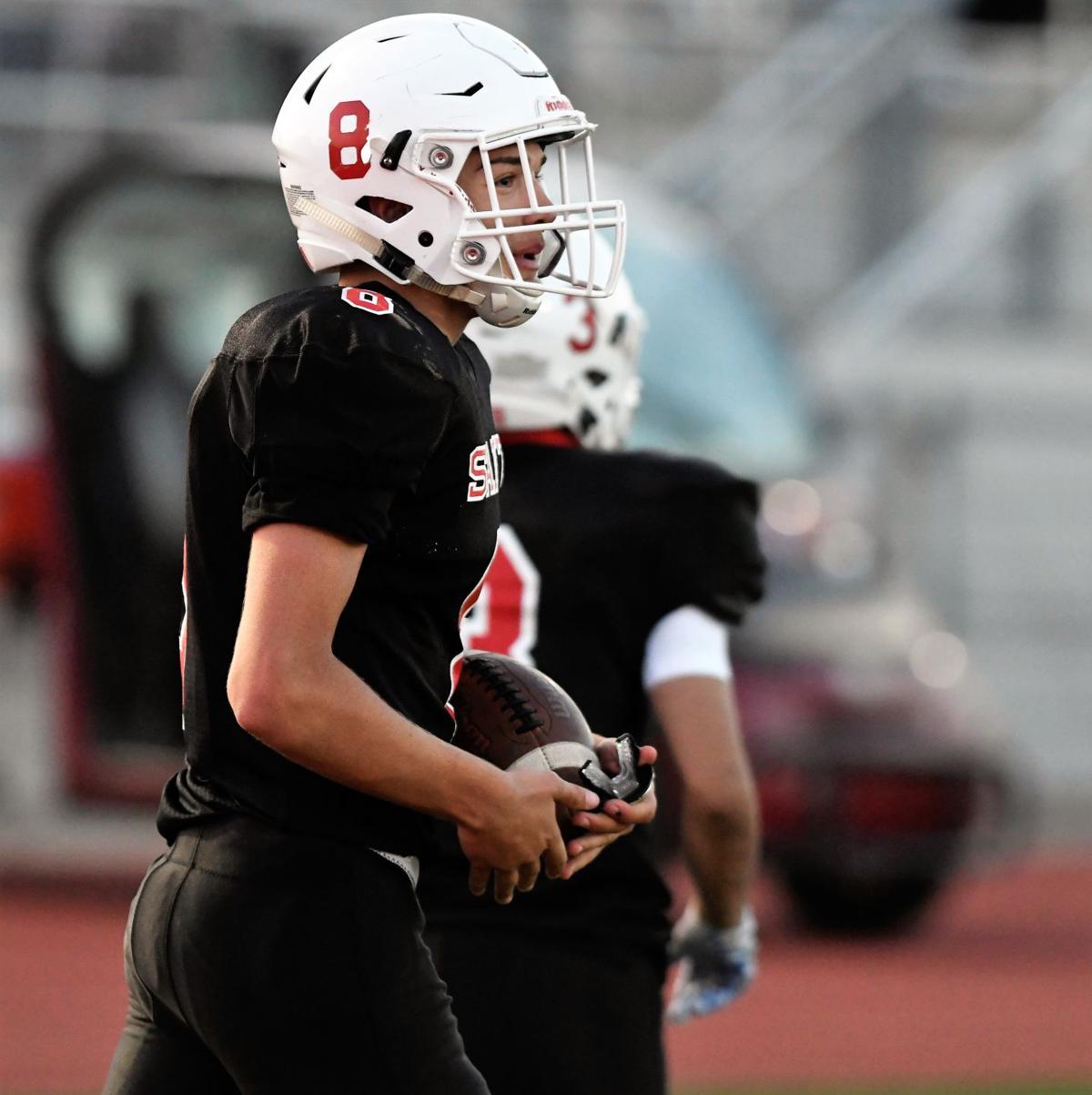 Santa Maria's Nick Martinez reacts after catching one of his two touchdowns during Friday's game against Atascadero. Martinez has five touchdown catches on the year. 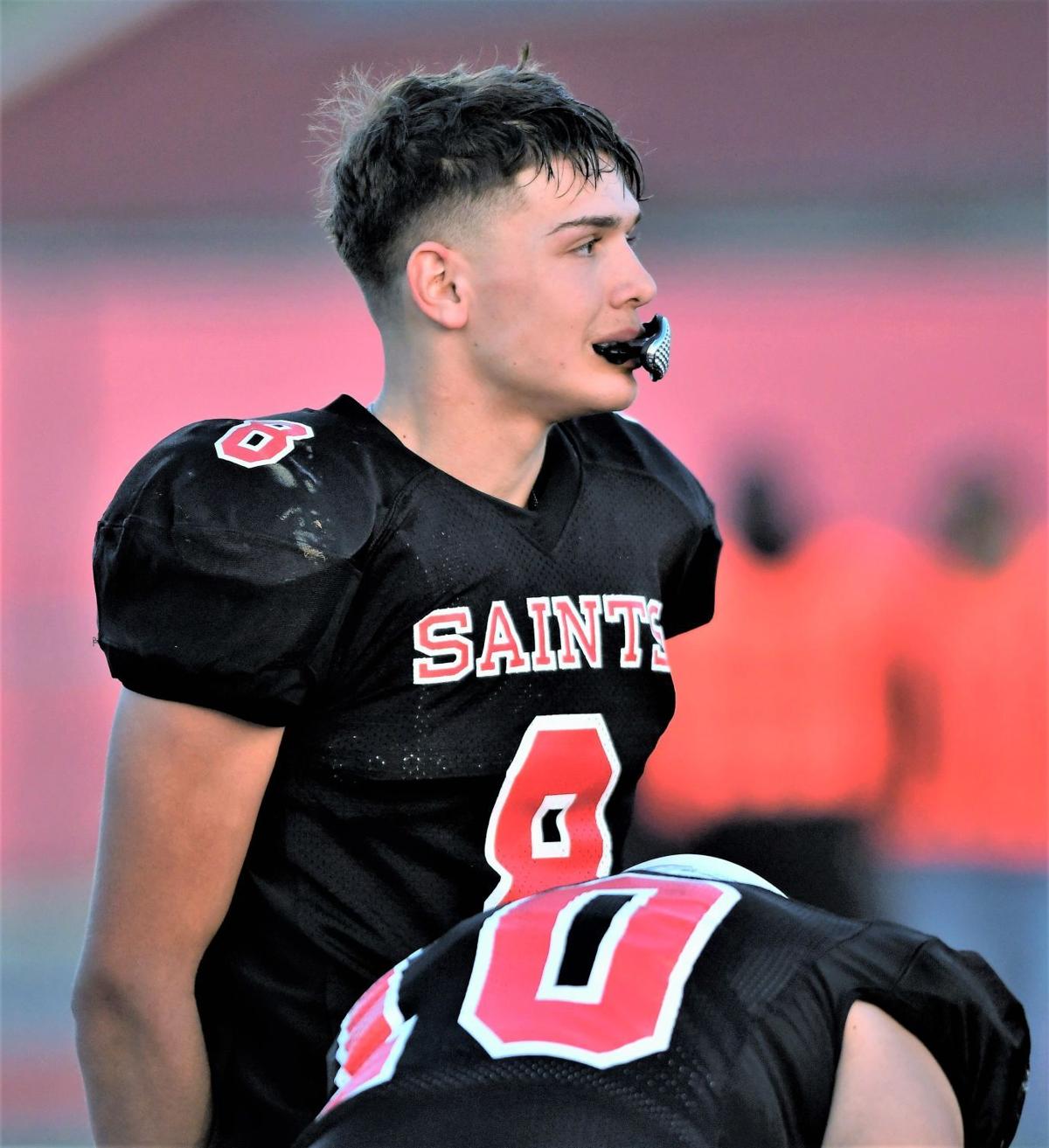 Santa Maria's Nick Martinez has 16 catches for 235 yards and five touchdowns in three games this spring. He also leads the team with 17 tackles, a sack, an interception, two forced fumbles and one fumble recovery. 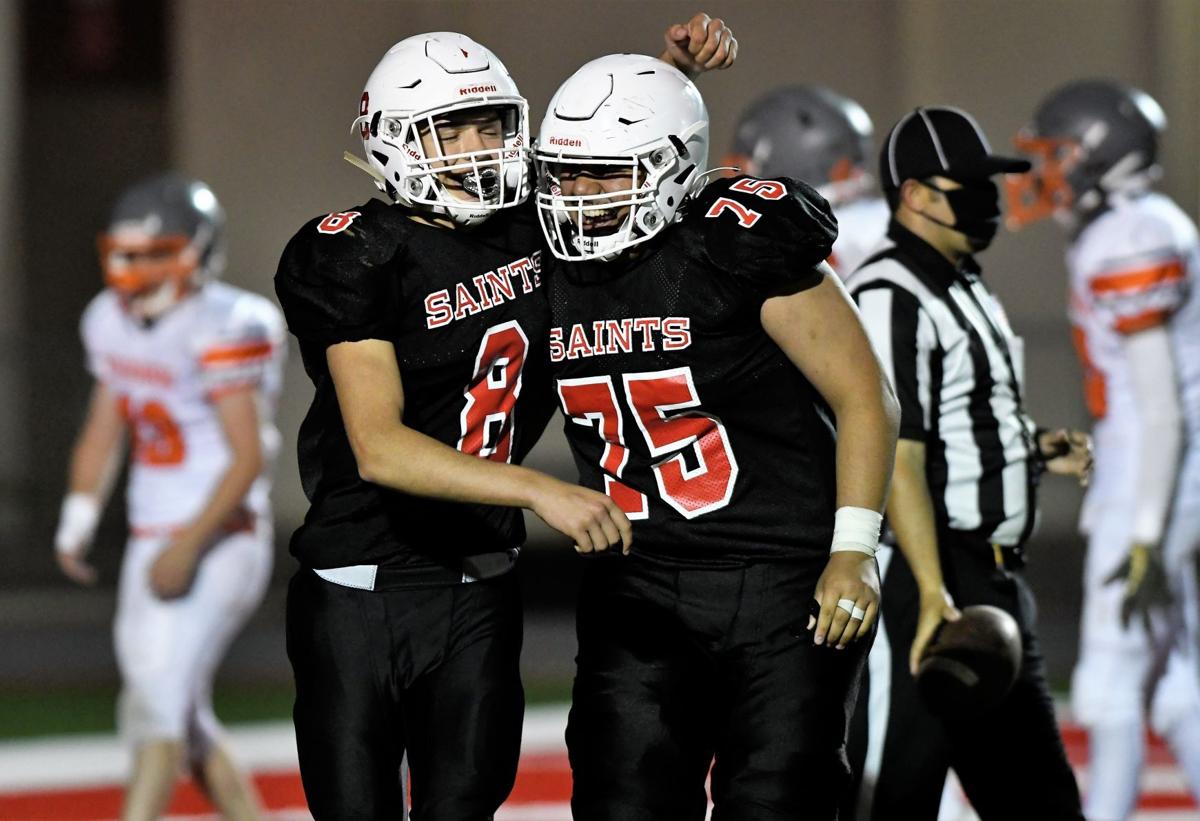 The rest of the Central Coast is learning something that the Santa Maria High football team has known for a while: Nick Martinez is a problem.

The junior receiver, who also plays linebacker, is having a stellar spring.

Martinez has caught at least one touchdown pass in each of the team's three games and has caught two touchdowns twice.

In just those three games, Martinez has 16 catches for 235 yards and five total touchdowns. He's averaging about 15 yards a catch and 80 receiving yards per game. He started the season with two touchdowns on five grabs in a win at Morro Bay. He then had seven catches for 125 yards and a score in the second game of the season against Nipomo on March 27.

Martinez says there's two things he focuses on when trying to make a catch: Being smarter and just better than his opponent.

"You've just got to be better than the corner, it's about IQ," Martinez said after the Nipomo game. "Having some size helps going up to the ball. You've got to play the ball and go get it."

Martinez has a similar receiving profile as former Santa Maria standout Jon Ramos. Martinez is a big receiver at 6-foot-1. Ramos was 6-foot-2. Ramos topped the 1,000-yard mark in 2017 when the Saints played 14 games and made the CIF title game. He caught nine touchdowns that season.

Murad Alamari, the Saints' starting quarterback, has thrown all five of his touchdown passes to Martinez.

"It feels good to score," Martinez said. "We practice hard and then get to the games and it pays off. We're just making plays."

Alamari has long had an eye on Martinez and isn't surprised to be making so many plays with him this spring.

"The thing with Nick is that last year he just played defense, he came up on varsity a little late in the season," Alamari said. "But Nick really wants it. We knew he had hands, he just needed to improve his route running. The kid has potential, he's all over the field on defense. The kid has heart and he has a great future.

"I see a lot in him, I feel he can go to college and do big things because he probably has the best hands on the Central Coast."

Martinez hasn't only impacted the game on offense. He's also, perhaps, the top defender on the team. He leads the Saints with 17 total tackles and also has a sack and an interception.

In each of the last two games he's pulled off this eye-catching sequence: He catches a touchdown pass on offense, then, on defense, rips the ball away from an opponent and takes it away. He's forced two fumbles that way.

"We brought him up last year at outside 'backer and at the JV level he was basically one of the better players," Saints coach Dan Ellington says of Martinez. "We knew that."

On offense, Ellington says, the team has focused on getting Martinez in 1-on-1 coverage and forcing teams to try and take him away from the offense. Ocean League defenses haven't figured out how to stop him.

"I knew that we could isolate him and I knew that teams would have to be concerned with him," Ellington said. "The goal against Atascadero was to force them to try and take him away and he still scored two touchdowns."

The Saints aren't running the offense through Martinez, either. Alamari has also been effective throwing to Alex Rodriguez, who has 11 catches for 120 yards in three games. In fact, eight Santa Maria players have caught passes and Alamari has also ran for three touchdowns.

"Nick has done it within the offense, we didn't force it in," Ellington said. "That's what I'm most proud of him for."

Ellington has also been happy with the play of Alamari in his first year leading the offense.

"He's made some really nice throws," Ellington said of the senior quarterback.

Martinez and the Saints are 2-1 on the season and will host Mission Prep (2-1) Friday in a pivotal Ocean League game. Kickoff is slated for 6 p.m.

Paso Robles hit two home runs and Jaiden Ralston nearly shutout and no-hit the Knights before the Bearcats came away with a 12-2 win in Orcutt.

Santa Maria's Nick Martinez (8) has 16 catches for 235 yards and five touchdowns in three games this spring. He caught two touchdowns in last week's 35-0 win over Atascadero.

Santa Maria's Nick Martinez reacts after catching one of his two touchdowns during Friday's game against Atascadero. Martinez has five touchdown catches on the year.

Santa Maria's Nick Martinez has 16 catches for 235 yards and five touchdowns in three games this spring. He also leads the team with 17 tackles, a sack, an interception, two forced fumbles and one fumble recovery.