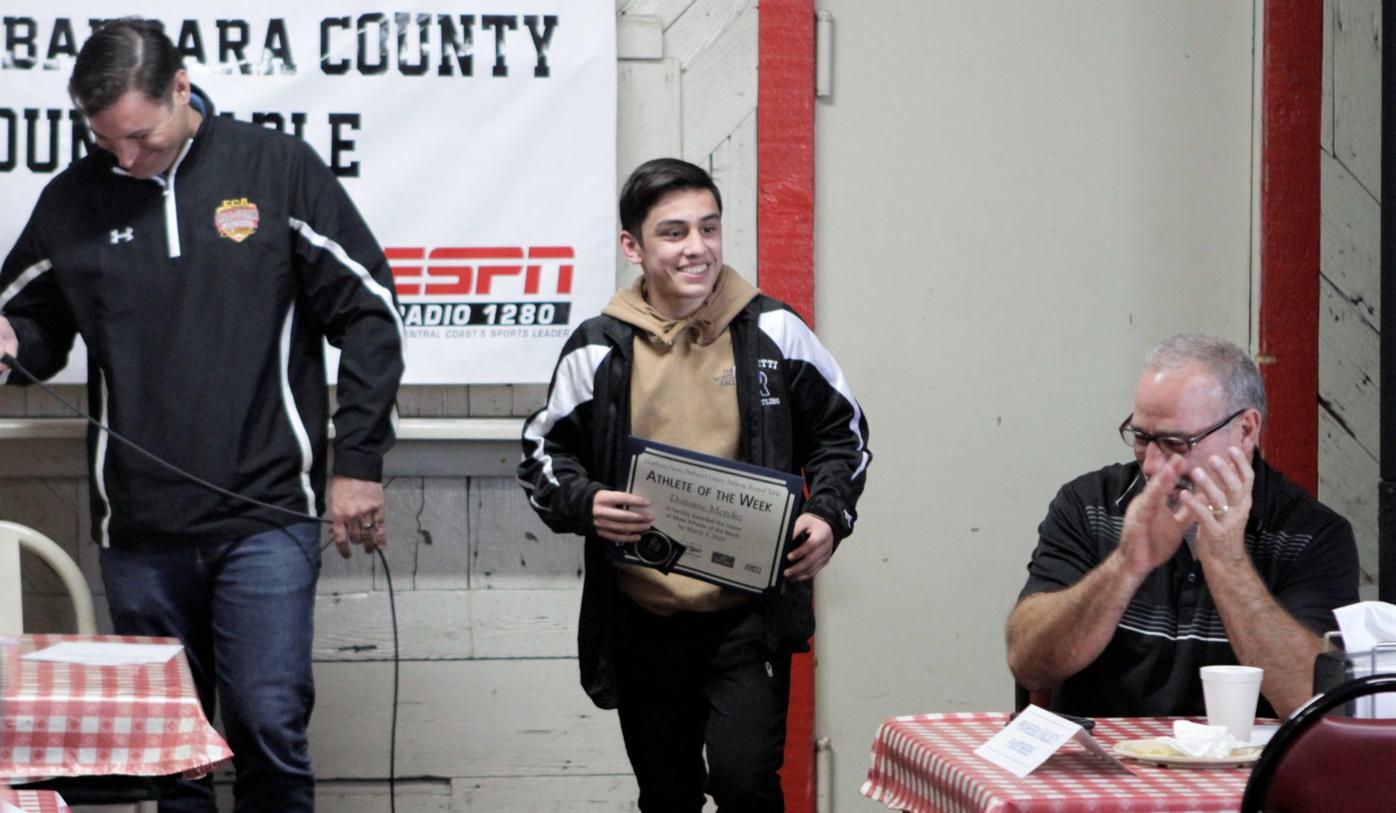 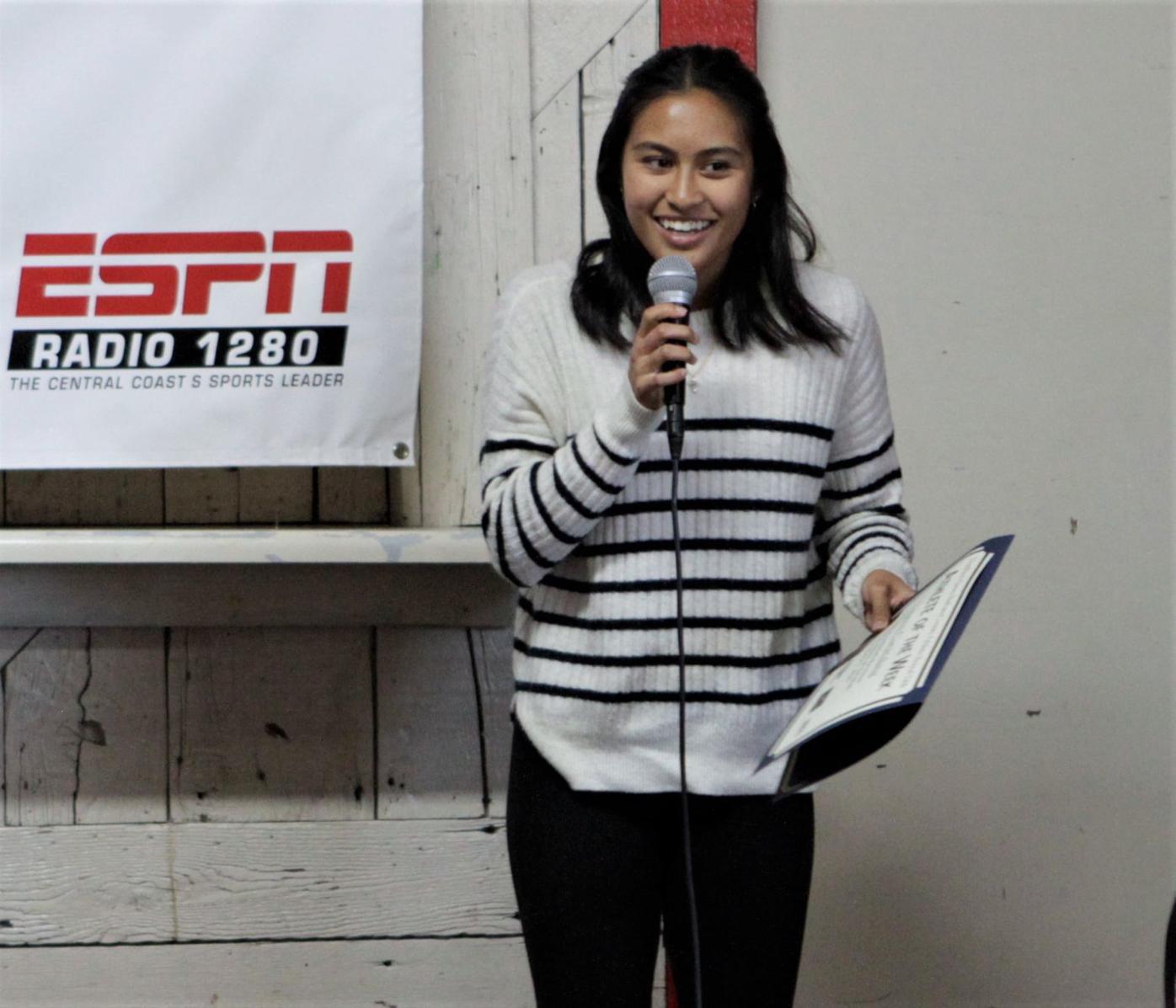 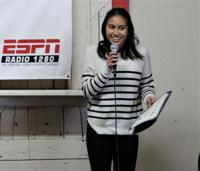 Pioneer Valley track and field athlete Lauren Carandang is named Athlete of the Week during a Northern Santa Barbara County Athletic Round Table at Giavanni's Pizza in Orcutt in March.

Pioneer Valley track and field athlete Lauren Carandang is named Athlete of the Week during a Northern Santa Barbara County Athletic Round Table at Giavanni's Pizza in Orcutt in March.

Some weeks can be difficult in choosing the most deserving Athlete of the Week.

This was not one of those weeks.

Though there were many deserving athletes at the Northern Santa Barbara County Athletic Round Table luncheon on Monday, two put fourth performances that rose above the rest.

Righetti wrestler Dominic Mendez, a sophomore, went to the CIF State Championships in Bakersfield as an underdog, the sixth-seeded competitor in a stacked 106-pound weight class.

Mendez surpassed his seeding, making it to the semifinals, where he put up a fight in a 1-0 defeat to the No. 2 seed Raymond Lopez.

Mendez ended up finishing fourth in the state in his class. Not bad for a sophomore.

Photos: Mendez and Carandang named Athletes of the Week

Pioneer Valley track athlete Lauren Carandang, a senior, had a big week, setting a school record at the Santa Maria City Meet last Wednesday. Carandang set the school triple jump record at the meet and notched a CIF qualifying mark in the process with a jump of 36 feet, 2 inches.

Over the weekend, Carandang finished third in the pole vault at the Central Valley Relays at Dinuba High School with a mark of 7-7.

Mendez won his first three matches at the State Meet in Bakersfield. He then faced Raymond Lopez, the No. 2 seed from national powerhouse Clovis Buchanan, falling by a single point.

He then moved to the consolation bracket, ultimately falling in the third-place match to finish fourth. In two years of high school wrestling, Mendez had made state both years and has won at least twice in both appearances.

"This year I brought it up a bit and took fourth, it feels good," Mendez said. "I wasn't really worried about rankings or anything, but I was the underdog so it felt good to have no pressure on me."

Mendez finished second at the CIF Central Section Finals to Lopez, the junior from Buchanan. Mendez and Lopez have seen a lot of each other this year.

Santa Maria finished 12-15 overall and 4-6 in the inaugural Ocean League last year as a first-year Central Section member. However, the Saints served notice with their big playoff win over Immanuel.

"It was tough, I wrestle the kid all the time, like every weekend at CIF and Masters," Mendez said. "I wanted to beat him this season, but he's a good competitor. Hopefully I can beat him next time."

It was a landmark season for Righetti wrestling as a whole, with a large contingent of Warriors advancing to the State Meet along with Mendez.

"It feels so much better (having teammates), last year we only had three guys make it and one was hurt," Mendez said. "It felt so much better have so many teammates there this year."

As Mendez's high school season winds down, Carandang's is heating up. But she already checked one major goal of her list with her CIF qualification mark in the triple jump.

"It's super relieving because now I can focus more on my technique and I know how much I've improved over the years," Carandang said. "I started jumping midway through my sophomore year, so I've only been doing it for two years."

Carandang was a competitive gymnast growing up and says she uses some of those skills in the triple jump while also working on her pole vaulting technique. Her goal is to clear 10 feet on the vault this year. The school record is 9-6, which Carandang has hit in practice.

"It's super fun and it is challenging," Carandang said of the pole vault. "Once you get over the bar it's really exhilarating."

The Santa Maria boys soccer team made the State playoffs and will host Oxnard Pacifica Tuesday in the first round of the CIF SoCal Regional. The Saints are the No. 3 seed. Kickoff is slated for 4 p.m.

The Lions baseball team was ranked in the CIF-SS Division 7 poll that was released Monday. The Lions made the semifinals last season. They were represented by junior Tim Trenkle and senior Jared Moore.

Former athletic director Dick Barrett spoke for the Braves, introducing baseball player Oscar Rojas, who has a 4.5 GPA and is committed to attend and pitch for Yale after this season. Rojas and the Braves got their first win of the season with a 5-4 victory over Righetti last week.

The first-year Bulldog men's swim team made its first appearance at the Round Table, with swimmer Jacob Ensing speaking for the new squad. Kyle Derry represented the men's team as Karen Castaneda represented the women's team.

"Our season is off to a great start as the men's team is holding its own in the conference. Keshaun Patel is a major point scorer for us," Ensing said.

The Spartans were introduced by athletic director Chad McKenzie, who saw two of his winter teams make CIF semifinals in girls soccer and girls basketball.

Richard Robles represented the PVHS baseball team. Robles had a huge game last Saturday in a 10-9 win over East Bakersfield. Robles got seven strikeouts (yes, seven) in two innings of relief work on the mound. He also had two doubles, six RBIs and the game-tying hit in the seventh, eventually scoring the winning run.

Monteiro noted that Carandang has a 4.2 GPA.

"This was a good year for our program, with two girls and six guys making state," Bronson said.

Senior Tim Noe spoke for the St. Joseph basketball team, which travels to Bakersfield for the state playoffs Tuesday night. Steven Vasquez and Samuel Bazunga were on hand for the Knight basketball team as well.

Photos: Mendez and Carandang named Athletes of the Week

The Righetti sophomore's goal before the 2019-20 season started was to place in the top eight at the 2020 CIF State Tournament.

He did just that. Now what?