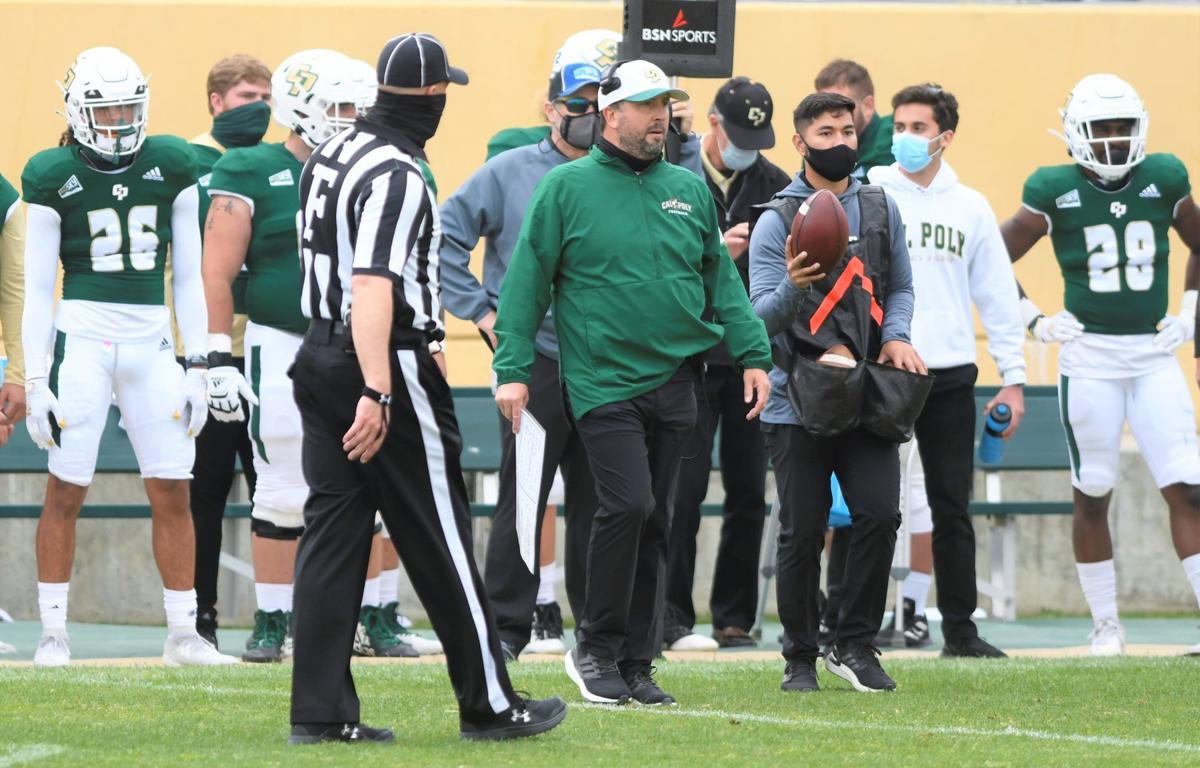 Cal Poly coach Beau Baldwin, seen on the sidelines during the March 13 home game against Southern Utah, has got off to an 0-2 start in San Luis Obispo. 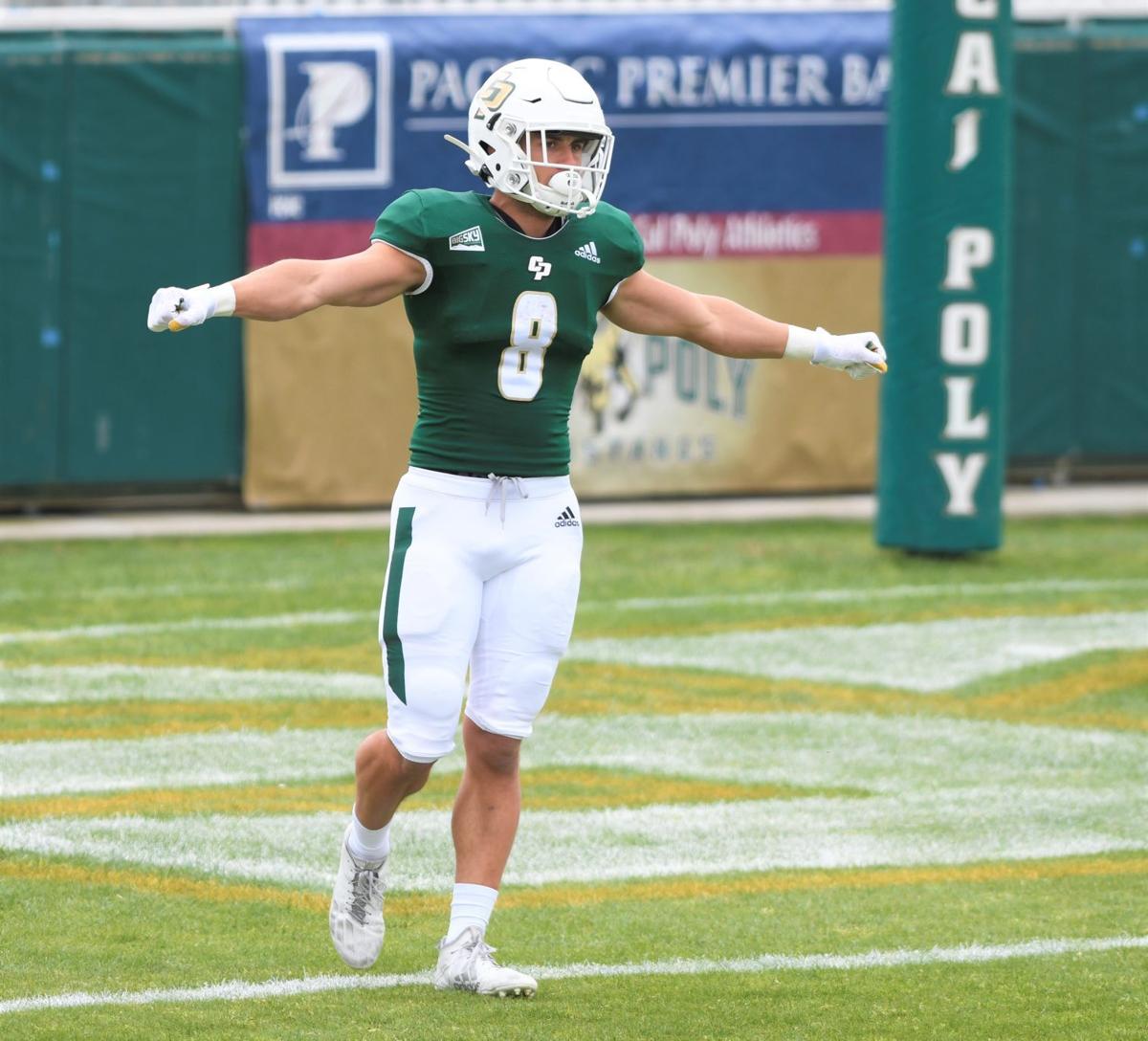 Cal Poly's CJ Cole signals that the ball landed in the end zone for a touchback on a kick return against Southern Utah on March 13. On Saturday, Cole scored his first career touchdown.

That's about the only good news for local Cal Poly football fans.

The Mustangs gave up nearly 800 yards of offense, allowed nine sacks and lost 73-24 at UC Davis on Saturday.

It was the second game of the Beau Baldwin era at Cal Poly, following last weekend's 34-24 home loss to Southern Utah. UC Davis improved to 2-1 on the season.

Cal Poly actually led at the outset Saturday in Davis. Colton Theaker, an Arroyo Grande High grad, hit a field goal for a 3-0 edge, before the Aggies went up 7-3 on a 22-yard Jared Harrell touchdown run.

The Mustangs answered that score via a 55-yard interception return for a touchdown from Brandon Davis.

After that, UC Davis reeled off 52 straight points. Ulonzo Gilliam gave the Aggies a lead they would not relinquish, putting them up 14-10 on a 1-yard run.

Hunter Rodrigues, the Aggies' quarterback, then threw three touchdown passes and ran for another in the second quarter as Davis led 49-10 at the break.

A field goal gave the Aggies a 52-10 lead in the third quarter and Trent Tompkins ran for a touchdown to make it 59-10.

Cole then capped a 75-yard drive that took 15 plays with a 2-yard touchdown run with 12:18 left in the game, ending the Aggies' run of 52 straight points.

The final UC Davis scoring play just added insult to injury: Backup QB Trent Tompkins took a quarterback keeper and raced through and around the Cal Poly defense on an 86-yard run, making the score 73-17 with 5:42 left.

Arroyo Grande eases past Atascadero as football makes its return

Noah Rasheed caught a 16-yard pass from Cal Poly backup Hunter Raquet for the final score of the game.

Rodrigues went 19-for-23 for 265 yards and three touchdowns with one interception. Davis threw for 376 yards as a team and ran for 392 more on 56 attempts.

The Mustangs ran 49 times for 153 yards, but only netted 89 yards. Hamler netted -31 yards when accounting for the seven sacks. Lepi Lataimua led the team with 13 carries for 59 yards. Cole carried the ball six times for 14 yards and the touchdown. He also caught two passes for 18 yards.

Quentin Harrison, who caught two touchdowns last week in the loss to Southern Utah, led the team with four catches for 45 yards.

Matt Shotwell led the team with 11 total tackles. Isaiah Jernagin had a breakout performances with 10 total tackles. Fenton Will had three total tackles. Lance Vecchio had the lone sack for the Mustangs, which forced a fumble from Rodrigues and was recovered by Shotwell. That resulted in the Mustangs' early field goal.

Cal Poly plays at Eastern Washington next Saturday. The Aggies and Mustangs are scheduled to meet again. Cal Poly hosts UC Davis Saturday, April 10 to cap the Aggies' six-game spring season. The Mustangs wrap up their season April 17 against Weber State. Davis was coming off a 18-13 loss to Weber State on March 13.

Mission Prep and Nipomo started their seasons with an afternoon game in San Luis Obispo.

Nipomo High hosted Orcutt Academy at a preseason meet as track competitions begin to resume on the Central Coast for the first time since the lockdown interrupted the CCAA Meet at Nipomo last March.

Orcutt Academy senior Tanner Buzard matched the school record at 6-feet in the high jump. Coach James Barr said he last jumped 4-10 as a freshman in 2018 and has not jumped since then.

Senior Ashley Mason ran a 17.70 in the 100-meter hurdles, which will be a school record when official results are posted. She set another personal record with a 13-3 in the long  jump.

Now that the Saints have won their season-opening game, a 6-2 victory at St. Joseph Saturday, it's time to take a deeper look at the makeup of this deep and talented group.

Cal Poly, in a school-issued press release, said the team does not have enough players to meet the Big Sky Conference requirements. The school said, after a number of serious injuries, only 49 players are suited to play.

Cal Poly coach Beau Baldwin, seen on the sidelines during the March 13 home game against Southern Utah, has got off to an 0-2 start in San Luis Obispo.

Cal Poly's CJ Cole signals that the ball landed in the end zone for a touchback on a kick return against Southern Utah on March 13. On Saturday, Cole scored his first career touchdown.