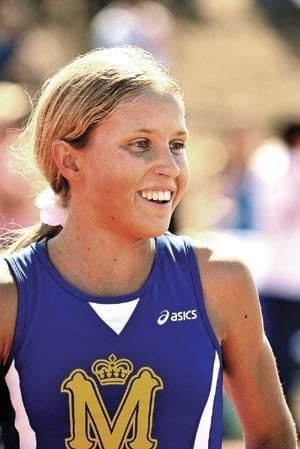 Jordan Hasay, seen as a Mission Prep senior after winning the girls 1,600 during the annual San Luis Obispo County track and field meet at Cuesta College in 2008, was named to the CIF Fall All-Century Team. 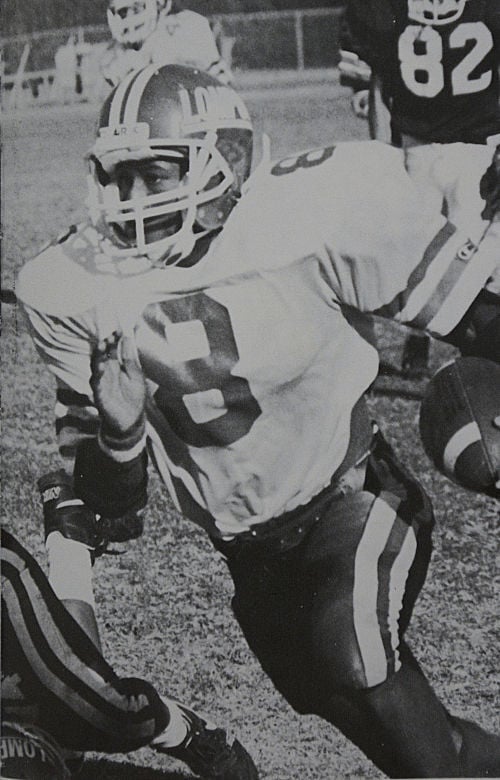 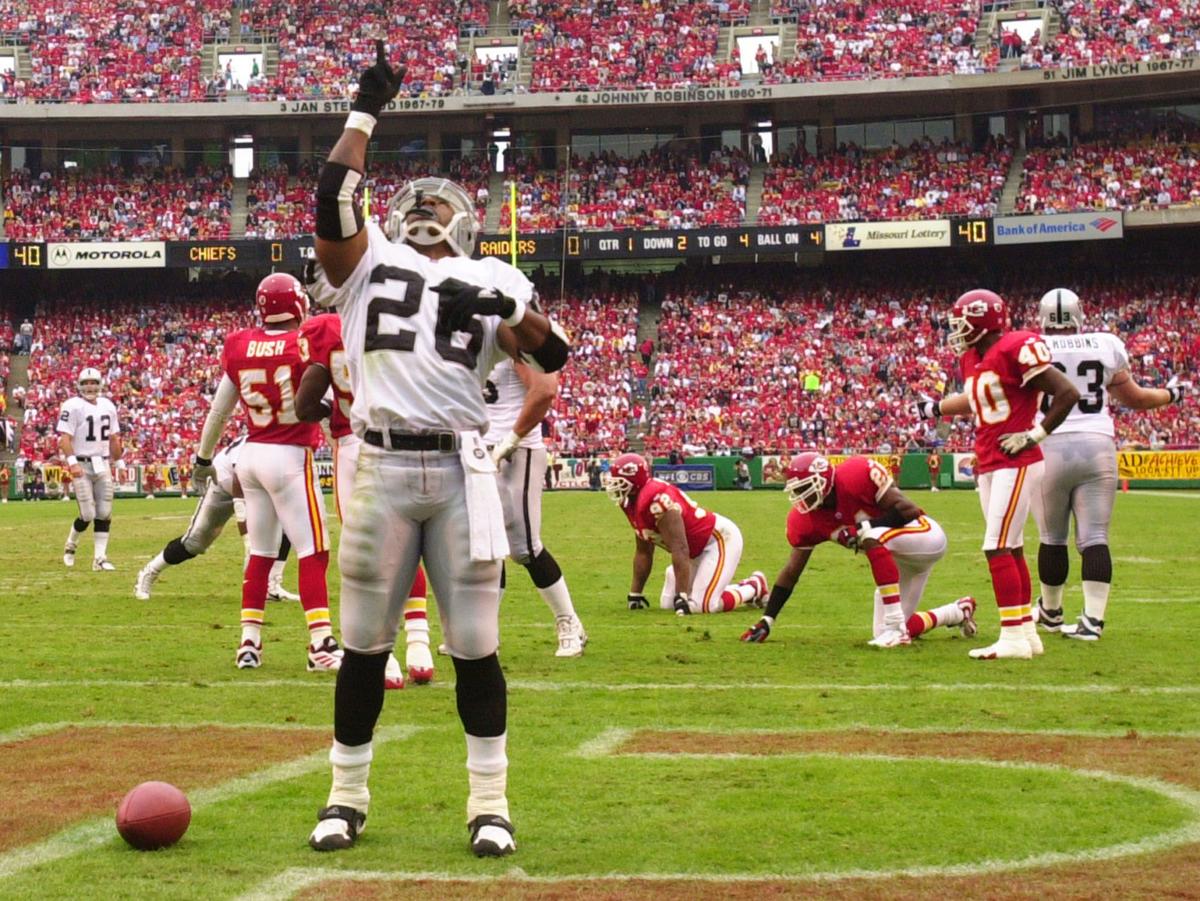 Napoleon Kaufman, from Lompoc High School, was drafted 18th overall by the Raiders in 1995. 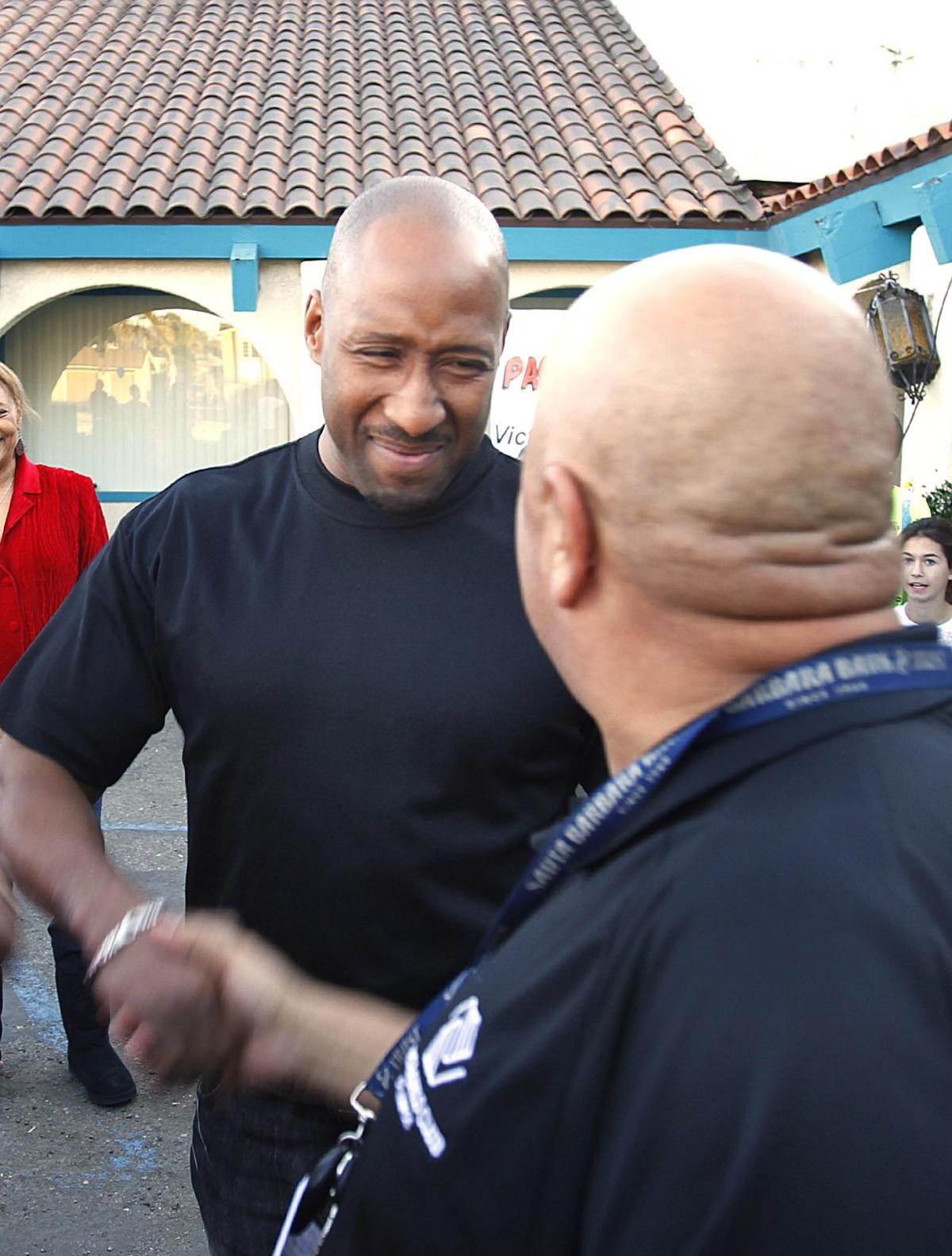 NFL-star-turned-pastor Napoleon Kaufman shakes hands with Conrad Gonzalez, the then-director at the Boys and Girls club, after he spoke to local kids in front of Second Hand Thirft store in Lompoc in 2012. 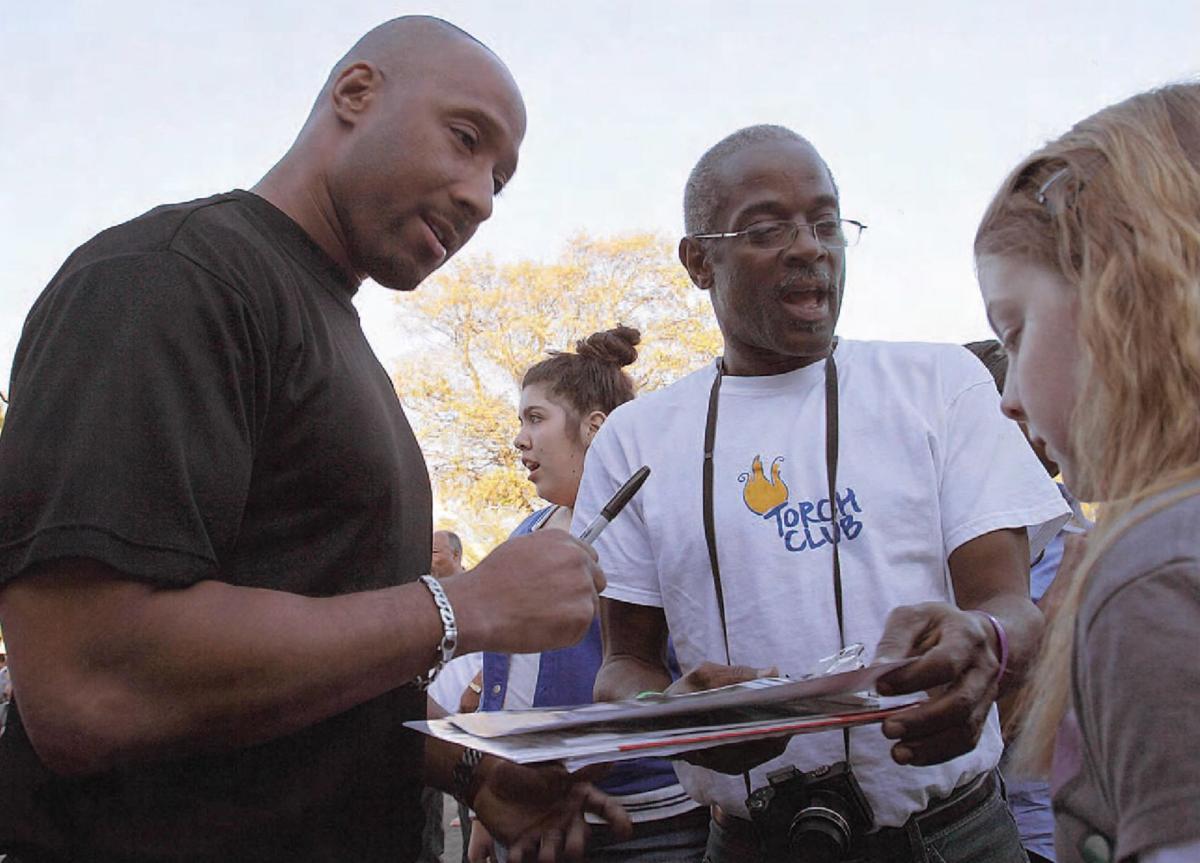 Elizabeth McDonwell, 10, gets an autograph from former NFL-star-turned-pastor Napoleon Kaufman after he spoke to local kids in front of the Second Time Around thrift story in Lompoc in January of 2012.

As we wait for local sports to return, we are taking a moment to look back at historic achievements in Central Coast sports history. Today, we visit the year 2014, when the California Interscholastic Federation celebrated its 100th anniversary. In doing so, the CIF selected an All-Century team, which featured two area standouts: Napoleon Kaufman and Jordan Hasay.

They both became members of the CIF Fall All-Century Team in 2014. Kaufman was selected for his 1990 football season at Lompoc High School. Hasay was tabbed for her 2008 cross country season at Mission Prep.

“I heard about it on Twitter,” Hasay said about her selection. “I’m very honored to be selected.”

Among those on the list is a tennis legend, the then Billy Jean Moffitt (Long Beach Poly, 1961).

Kaufman rushed 1.008 yards as a sophomore with Lompoc in 1988. As a junior, he accumulated 2,954 all-purpose yards and 39 touchdowns. As a senior in 1990, Kaufman rushed for 1,960 yards and 28 touchdowns as the Braves won a CIF Southern Section championship.

Kaufman was named to multiple prep All-American teams after his senior season. He finished with 86 touchdowns and 5,151 rushing yards as a Brave.

Kaufman later went on to play professionally with the Oakland Raiders, where spent his entire pro career. Kaufman was selected in the first round out of Washington with the 18th overall pick in the 1995 NFL draft. He was named the Pac-10 Offensive Player of the Year with the Huskies and was twice named the team MVP.

Kaufman rushed for 4,792 yards on 978 carries in the NFL. He scored 12 rushing touchdowns in 91 career games. He abruptly retired in 2000 at the age of 27. He still holds the Raiders' single-game rushing record with 227 yards in a game.

Kaufman went on to become an ordained minister after his playing days and was the head football coach at Bishop O’Dowd High School in Oakland until 2018. He led O'Dowd to a state title in 2016. He was serving as the Oakland Raiders' team chaplain until the team moved to Las Vegas in 2020. Randall Cunningham, a former Santa Barbara High star and NFL quarterback, took over the team's chaplain duties.

In December, she won the Foot Locker national cross country championship, becoming the first runner to do so as a freshman and then as a senior.

Workers are putting the finishing touches on the FieldTurf replacement project that was started last month at the Saints' football stadium.

Several cross country runners are on the list. Some of them are Olympian Mary Decker (1973, Orange High School), Sarah Baxter (2013, Simi Valley) and the late Louis Zamperini (1934, Torrence).

“I just finished the book ‘Unbroken’, the story of Louis Zamperini, and it was very inspiring,” said Hasay.

We should be getting ready for the high school football season, but we're not. All high school and most junior college sports in California have been pushed back to 2021. The college football season is in jeopardy across the country.

Some sports programs are taking the mask-wearing challenge head on.

Zamperini, who was once wrongly presumed dead - President Franklin Roosevelt sent a condolence letter to Zamperini’s mother - floated on a raft 47 days after his B-24 crashed into the Pacific Ocean in May of 1943, then was captured by the Japanese.

He was held prisoner until May of 1945. That tormented his post-war experiences until, he told author Laura Hillenbrand, 1949 when he forgave the men who held him prisoner.

Hasay made the United States team for the 2014 Worlds, the first time she qualified for that track and field event.

She subsequently switched to the Marathon and finished third at Boston twice. The first time she set an American women’s record for a first-time marathon runner.

After her third-place finish there in 2019, injuries plagued Hasay. She completed the race at the 2020 Olympic Trials but dropped off the pace after running with the lead pack the first half.

The COVID-19 pandemic eventually caused the 2020 Summer Games, set for Tokyo, to be scrubbed. The Games have been tentatively re-scheduled for 2021 in Tokyo.

Vote: Nick Kimball is your choice for Player of the Decade

Bailey: College football is likely canceled this year. Will the NFL follow suit?

There are foundational differences among the two and, even as the college football season is almost certainly getting canceled, that does not mean there won't be NFL football this fall.

After months of cancellations, Altheide was finally able to celebrate a bit. She certainly deserved it.

Jordan Hasay, seen as a Mission Prep senior after winning the girls 1,600 during the annual San Luis Obispo County track and field meet at Cuesta College in 2008, was named to the CIF Fall All-Century Team.

Napoleon Kaufman, from Lompoc High School, was drafted 18th overall by the Raiders in 1995.

NFL-star-turned-pastor Napoleon Kaufman shakes hands with Conrad Gonzalez, the then-director at the Boys and Girls club, after he spoke to local kids in front of Second Hand Thirft store in Lompoc in 2012.

Elizabeth McDonwell, 10, gets an autograph from former NFL-star-turned-pastor Napoleon Kaufman after he spoke to local kids in front of the Second Time Around thrift story in Lompoc in January of 2012.