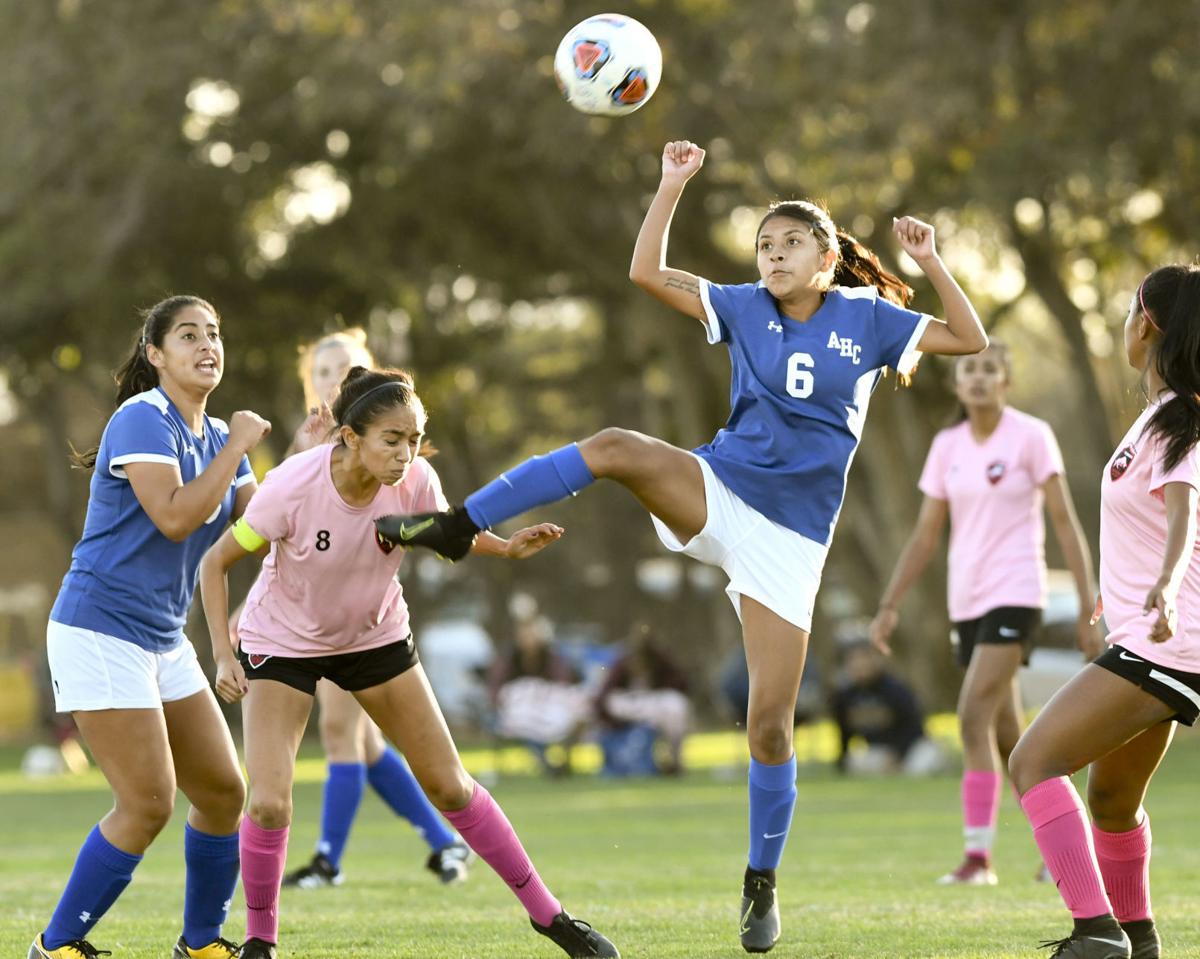 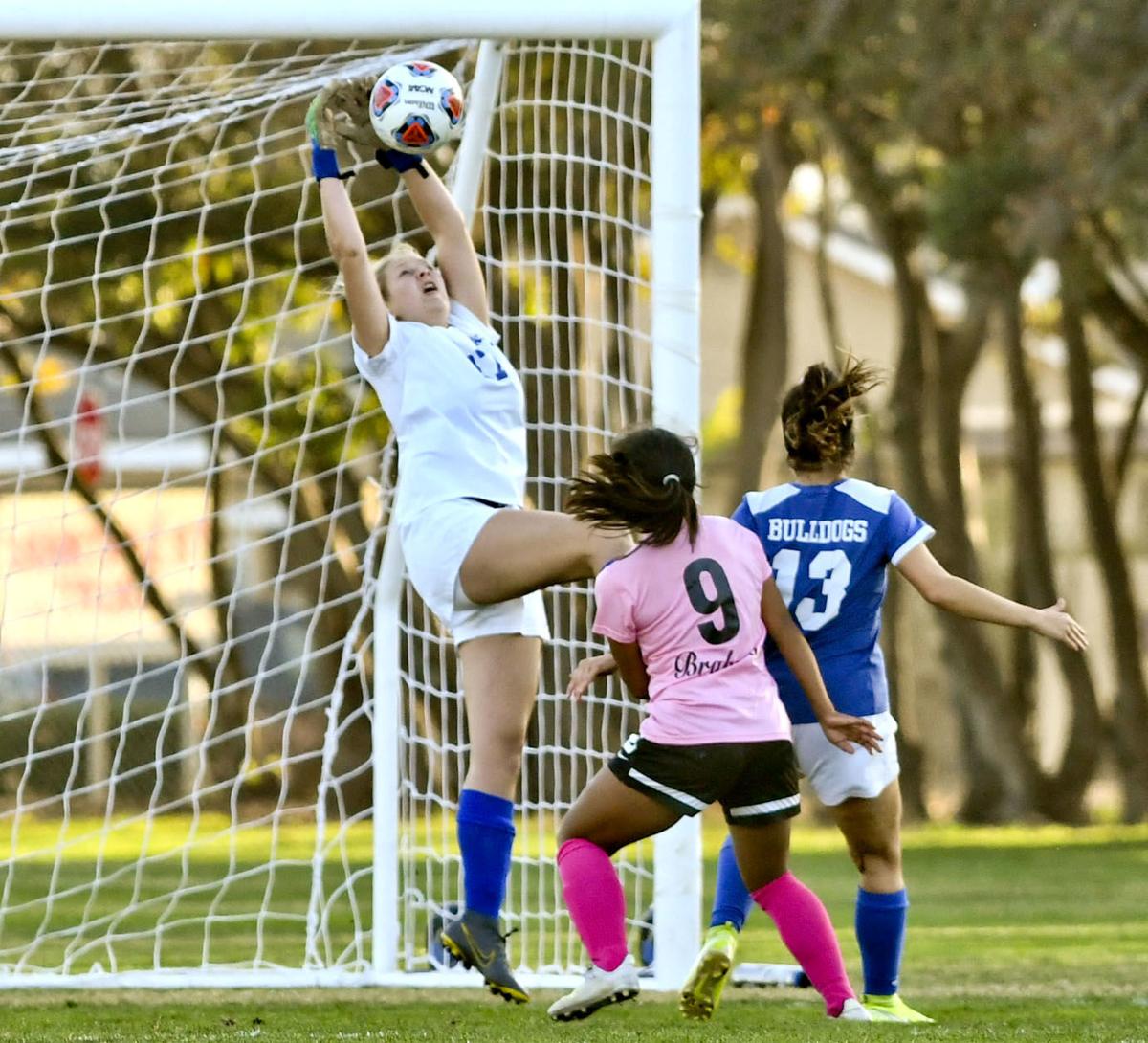 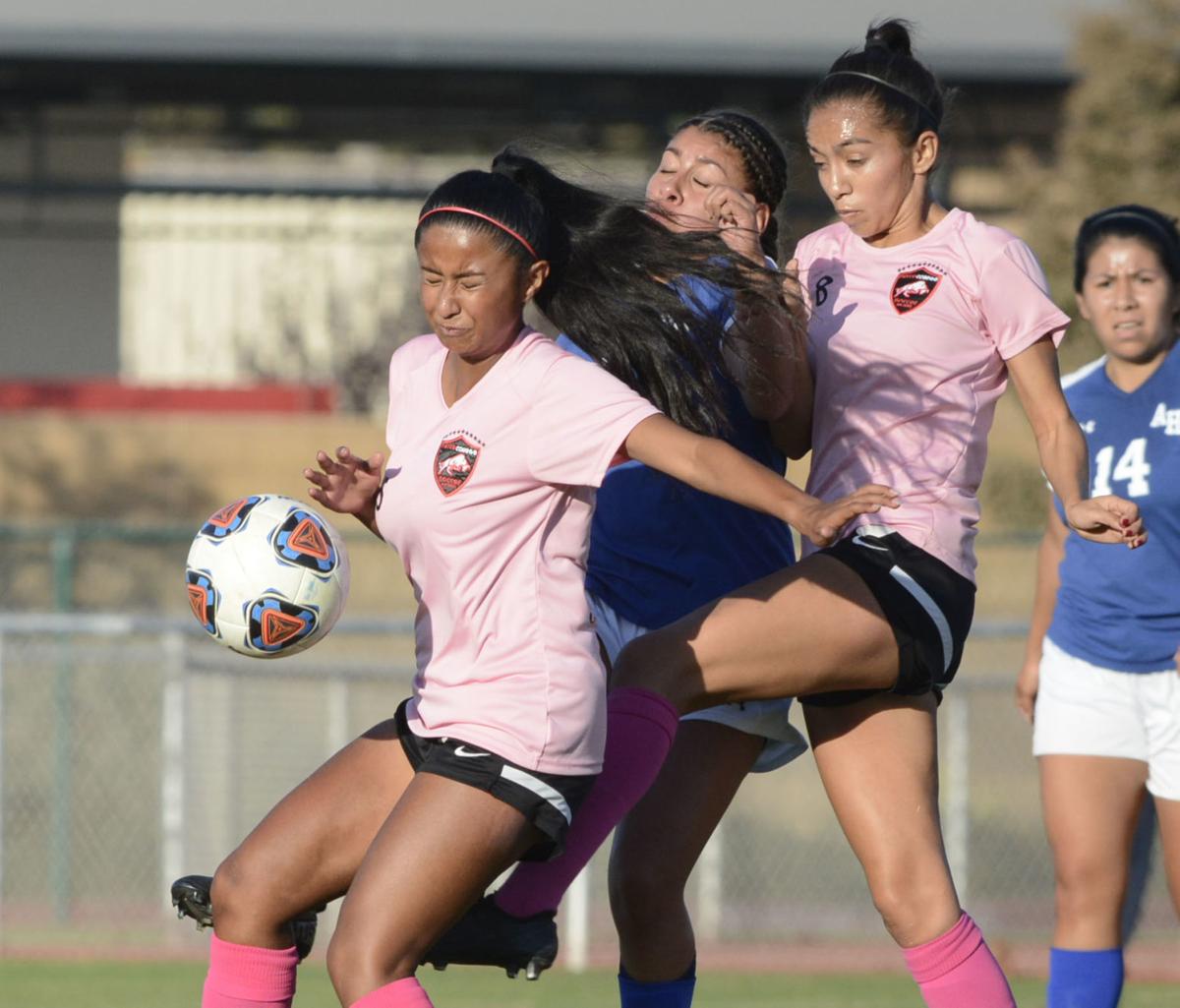 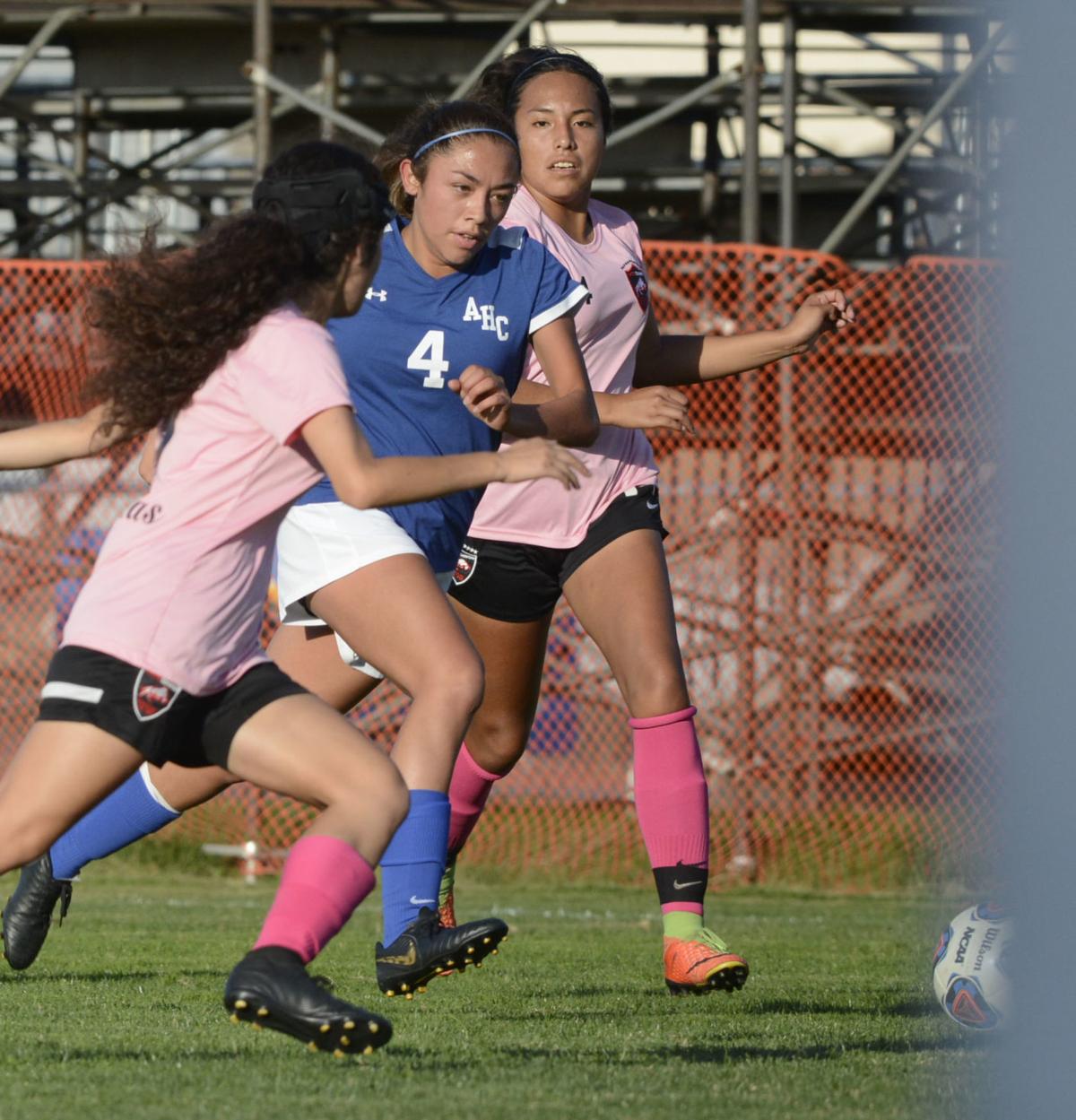 Hancock College's Alivia Valdez moves the ball toward the goal against L.A. Pierce. 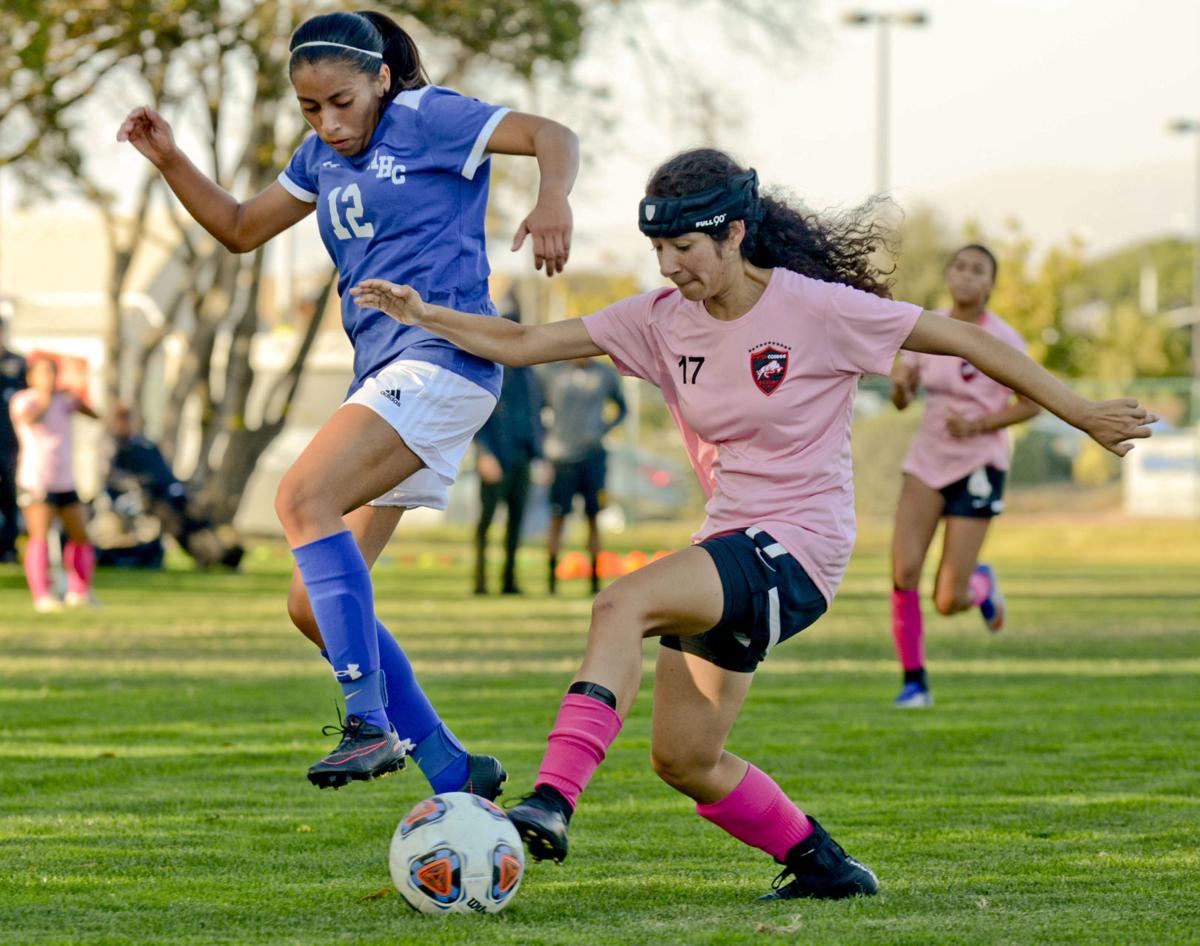 The Hancock College men came from 3-1 down to beat Moorpark 4-3, and the Hancock women played Los Angeles Pierce to a 0-0 draw in a Western State Conference soccer doubleheader at Hancock Tuesday.

In the Bulldogs’ first game in the second half of league games, the Brahmas salvaged a tie after the Hancock women won 1-0 at Pierce in their conference opener.

Marino Corona completed the Hancock men’s comeback when, after taking Eli Zuniga’s pass in the 75th minute, he blasted a shot from well beyond the top of the penalty box, high into the goal for the winning score.

“I saw they were getting back slow, and I took advantage. I took the shot,” said Corona.

“That was a great job in that shot,” Hancock coach Billy Vinnedge said of the winning goal.

After a first half in which “we looked like we didn’t want to be here,” said Vinnedge, the Hancock attack was all over it after the break.

Save the last few minutes when the Raiders sustained some drives deep into Bulldogs territory, and four Moorpark corner kicks failed, Hancock dominated possession time in the second half.

The Raiders particularly had trouble defending the Bulldogs’ drives down the left sideline.

“We saw a weakness, and when we see a weakness we take advantage,” said Corona.

Moorpark goalkeeper Brandon De Los Santos kept the score 3-1 when he knocked a deflected ball over the top post early in the second half.

In the 49th minute. Niko Glass made a sharp backward pass to an open Bryan Gomez who knocked the ball into the net. Eduardo Rodriguez, with an assist from David Lopez, brought the Bulldogs to a tie in the 57th.

“I told them at halftime to have a little self pride, and you saw what happened in the second half,” said Vinnedge.

Hancock goalie Maisen Baro had one test in the second half. He stopped a header from close in late.

Breaking down the Big Game: How Lompoc and Cabrillo match up

Braves coach Andrew Jones, like many coaches in rivalry games, says you can throw out the records when Lompoc and Cabrillo meet in the Big Game.

Glass, with an assist from Juan Montelongo, evened the game at 1-1. However, Adrian Ruiz and then Jason Bar tacked on a goal for the Raiders before the end of the half.

However, the Bulldogs owned the second half, and they surged to the winner.

The goalies, Joanna Cerda for the Brahmas and Brooke Stewart for the Bulldogs, were the stars of the women’s game.

Both made multiple tough saves. Cerda knocked a promising-looking shot over the top post in the first half. Stewart, near the end of the half, did the same.

Cerda stopped a point-blank shot with the Hancock shooter about a foot in front of her. Stewart reached high to snag a free kick in the first half.

Alivia Valdez helped the Bulldogs keep the Brahmas, who had some strong second-half drives from Nirmolakpreet Kauer and Diana Millay, off the scoreboard in the second half.

The Righetti boys and girls water polo teams both finished the regular season by winning handily at Righetti’s Rob Knight Pool at Righetti on Tuesday evening.

Hancock College's Alivia Valdez moves the ball toward the goal against L.A. Pierce.