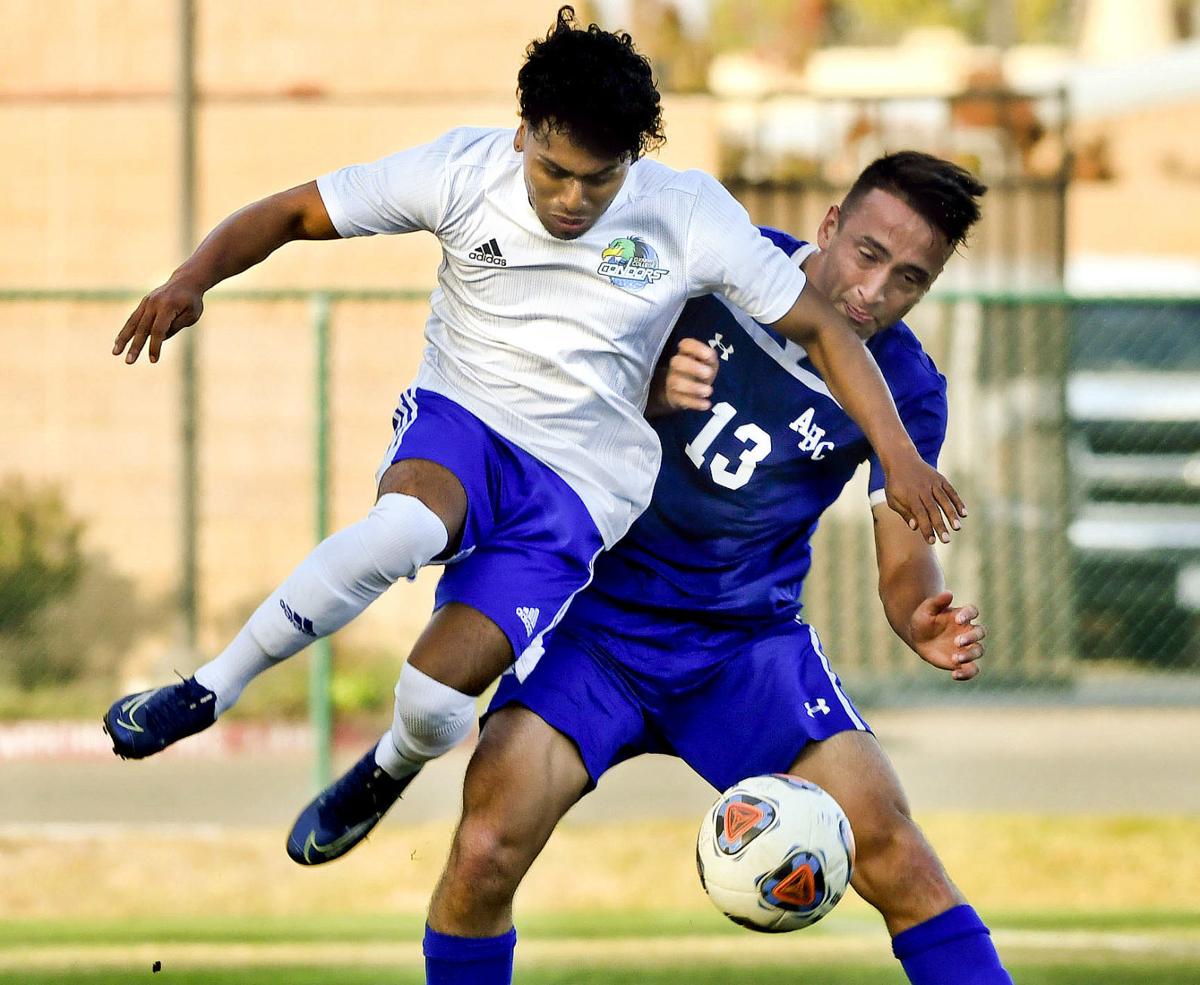 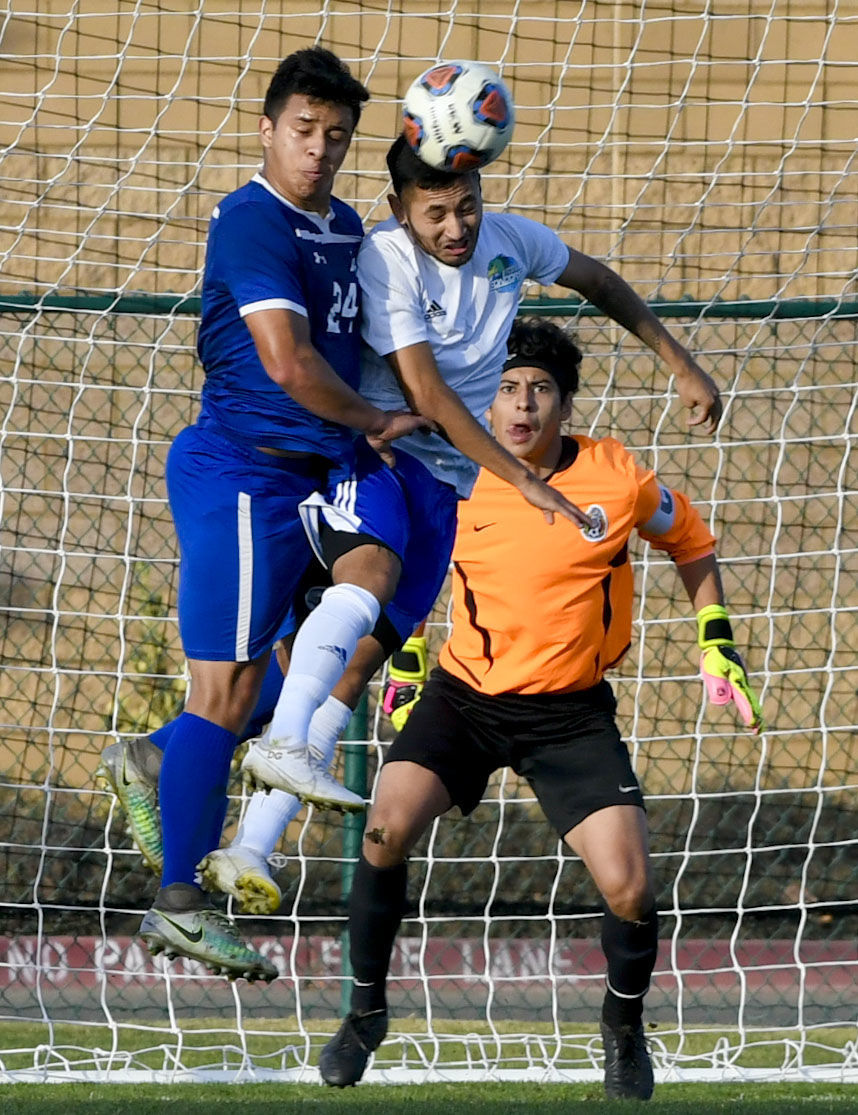 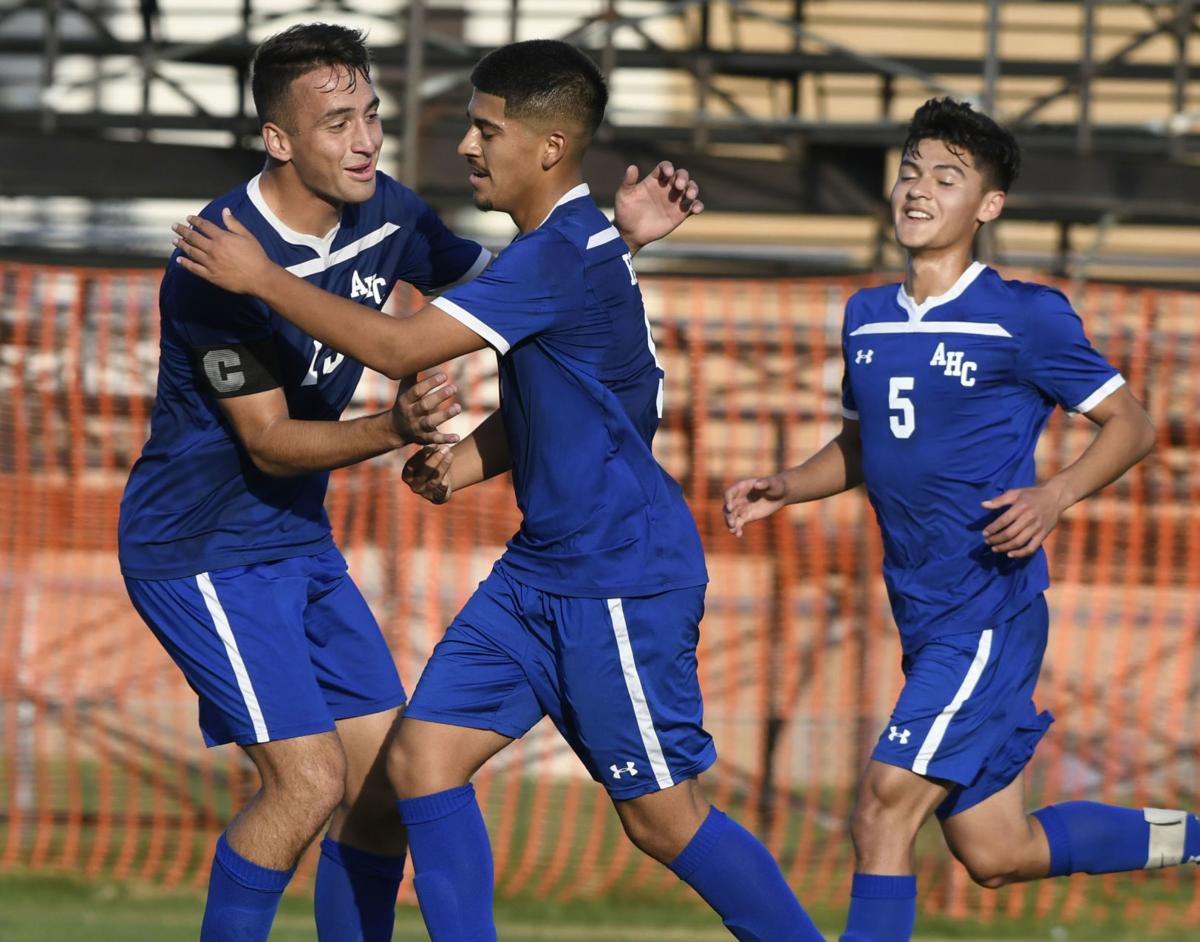 Hancock College's Juan Montelongo, center, is congratulated by Nikolai Glass, left, and Christian Angulo (5) after he scored against Oxnard College on Tuesday. 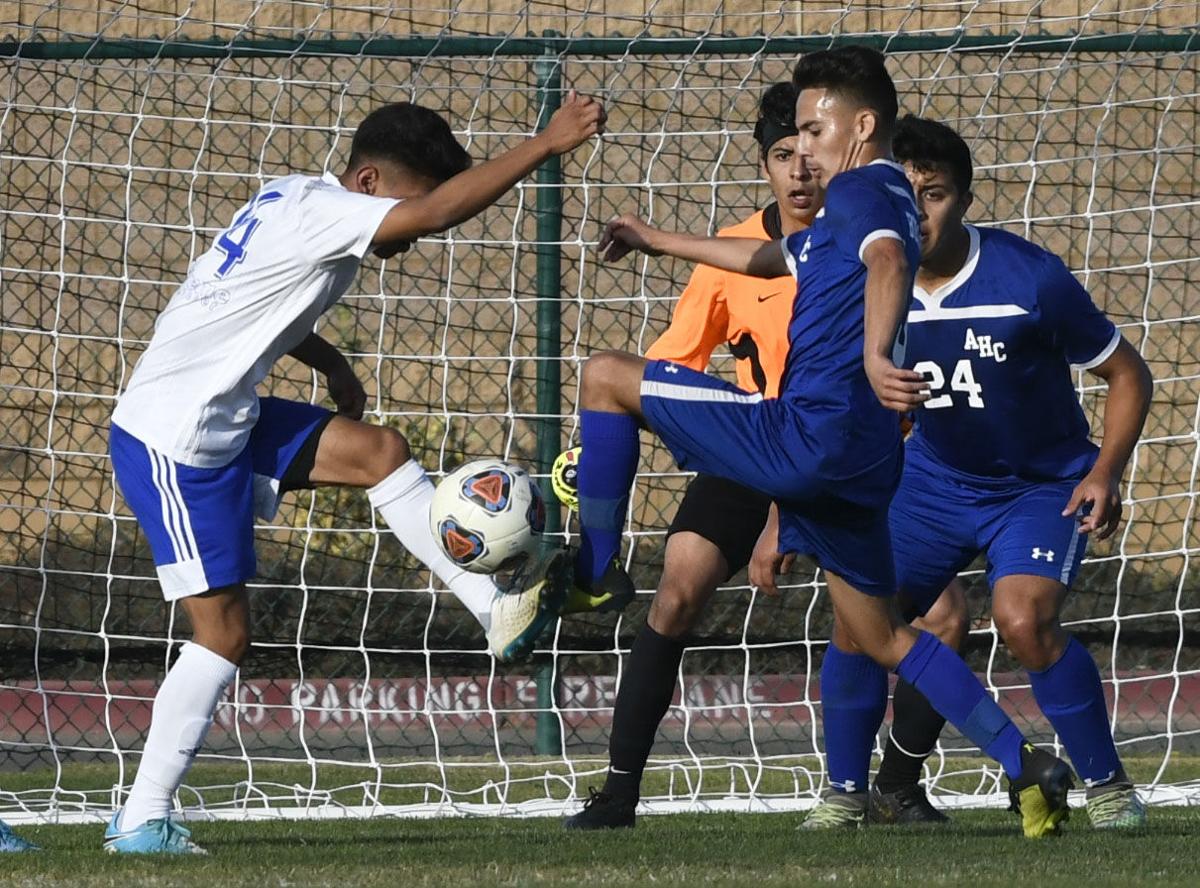 Oxnard College's Jose Olea, left, tries to get off a shot as Hancock College's David Lopez defends on Tuesday. 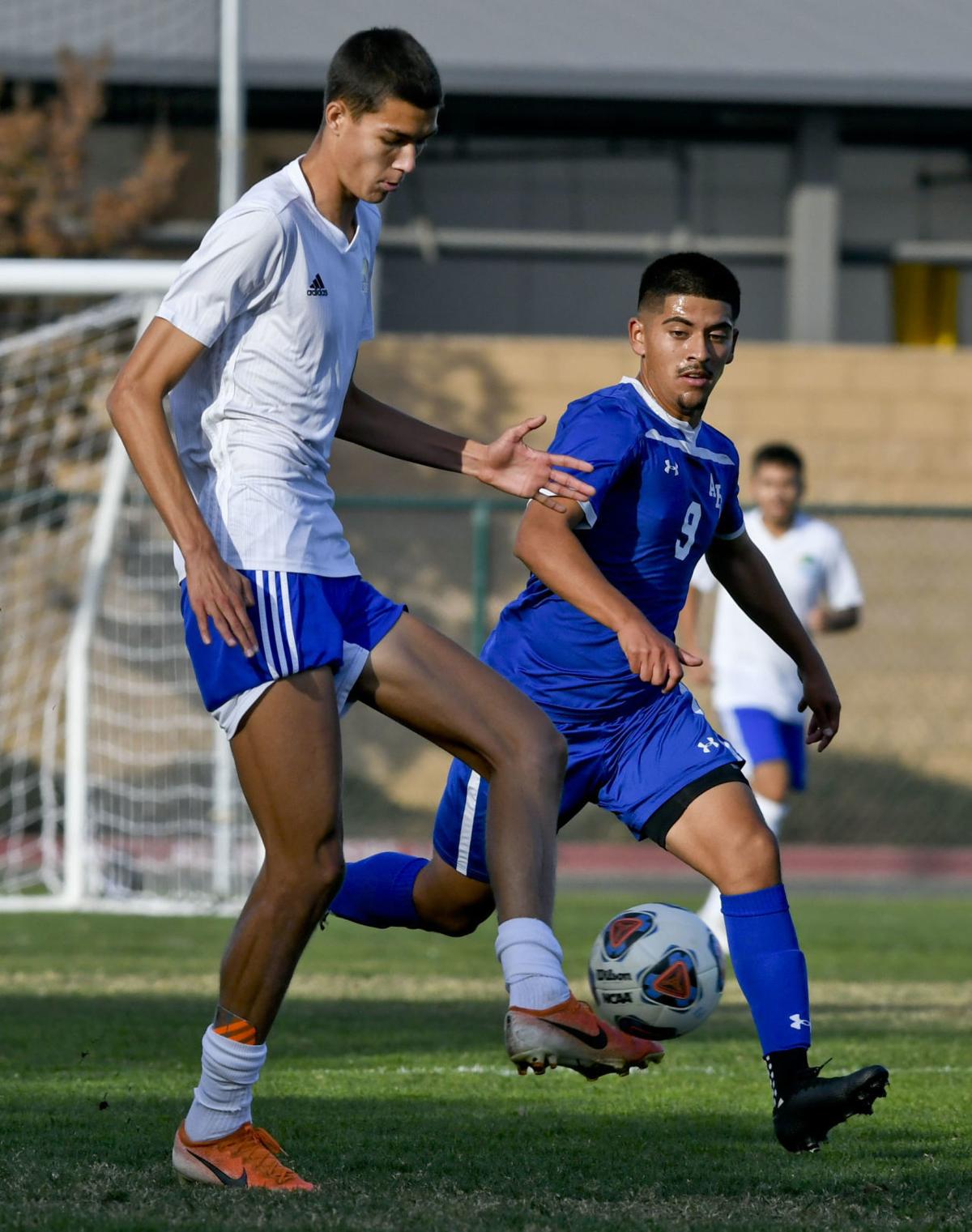 Oxnard College's Noah Dollenmayer passes back to his goalie as Hancock College's Juan Montelongo chases the ball on Tuesday.

The Hancock College men’s soccer team needed a win or a tie Tuesday to stay in contention for the conference title. The Bulldogs got neither one.

The second half at Hancock was all Oxnard, and the Condors took a 4-1 win to clinch the Western State Conference North Division championship.

That is because each squad has just one conference game left. The Bulldogs will finish their regular season with a 3 p.m. WSC North game at Moorpark.

Oxnard will finish its conference campaign with a Friday home game at Oxnard. The Condors beat the Bulldogs 2-0 in the first round of conference games.

Juan Montelongo evened the score for Hancock Tuesday with a goal in the 33rd minute of the second half. Oxnard goalkeeper Salvador Perez, trying to clear the ball, kicked it right to Montelongo instead, and Montelongo capitalized.

After the teams were tied 1-1 at halftime, Oxnard scored three second-half goals to take a 4-1 win over Hancock and clinch the WSC North Divis…

Trouble was, that was the only shot on goal the Bulldogs had.

“Doesn’t matter if you’re hanging with the opponent,” said Hancock coach Billy Vinnedge. “If you’re not generating shots, you’re not going to win.”

Oxnard controlled the action in the second half, and David Garcia put the Condors ahead for good when he lined a shot into the net in the fifth minute after the break.

The Condors had just five shots on goal, but four of them went in.

After out-playing the Condors the last part of the first half, the Bulldogs simply couldn’t match them in the second.

“It’s such a shame because the second half has been our half,” said Vinnedge.

CIF tennis: St. Joseph nearly pulls off title quest despite being down two starters to Sanger

It wasn’t on Tuesday. The Condors kept working themselves open and Noah Dollenmayer, in the 10th minute of the second half, and Erik López, on a point-blank follow shot in the 40th, tacked on goals for the Condors after the Garcia tally.

Oxnard midfielder Louis Juarez had the only assist. He also helped the Condors’ defense shut off most of the few threats the Bulldogs had after intermission.

Hancock settled for draws in the second half of conference play against two teams the Bulldogs beat in the first, Santa Barbara and Los Angeles Mission.

“Mission is one of the best teams in the conference,” said Vinnedge.

“It’s really a shame, all of these ties we’ve played in this state,” thanks to no overtime games during the regular season, the Hancock coach said.

“It’s really too bad, because 20 minutes (of overtime) might determine a winner.”

College of the Sequoias had 22 points off turnovers to Hancock’s six. The Giants have a six-footer, Aubrey Nunes, who has game. The tallest Bu…

Hancock College's Juan Montelongo, center, is congratulated by Nikolai Glass, left, and Christian Angulo (5) after he scored against Oxnard College on Tuesday.

Oxnard College's Jose Olea, left, tries to get off a shot as Hancock College's David Lopez defends on Tuesday.

Oxnard College's Noah Dollenmayer passes back to his goalie as Hancock College's Juan Montelongo chases the ball on Tuesday.