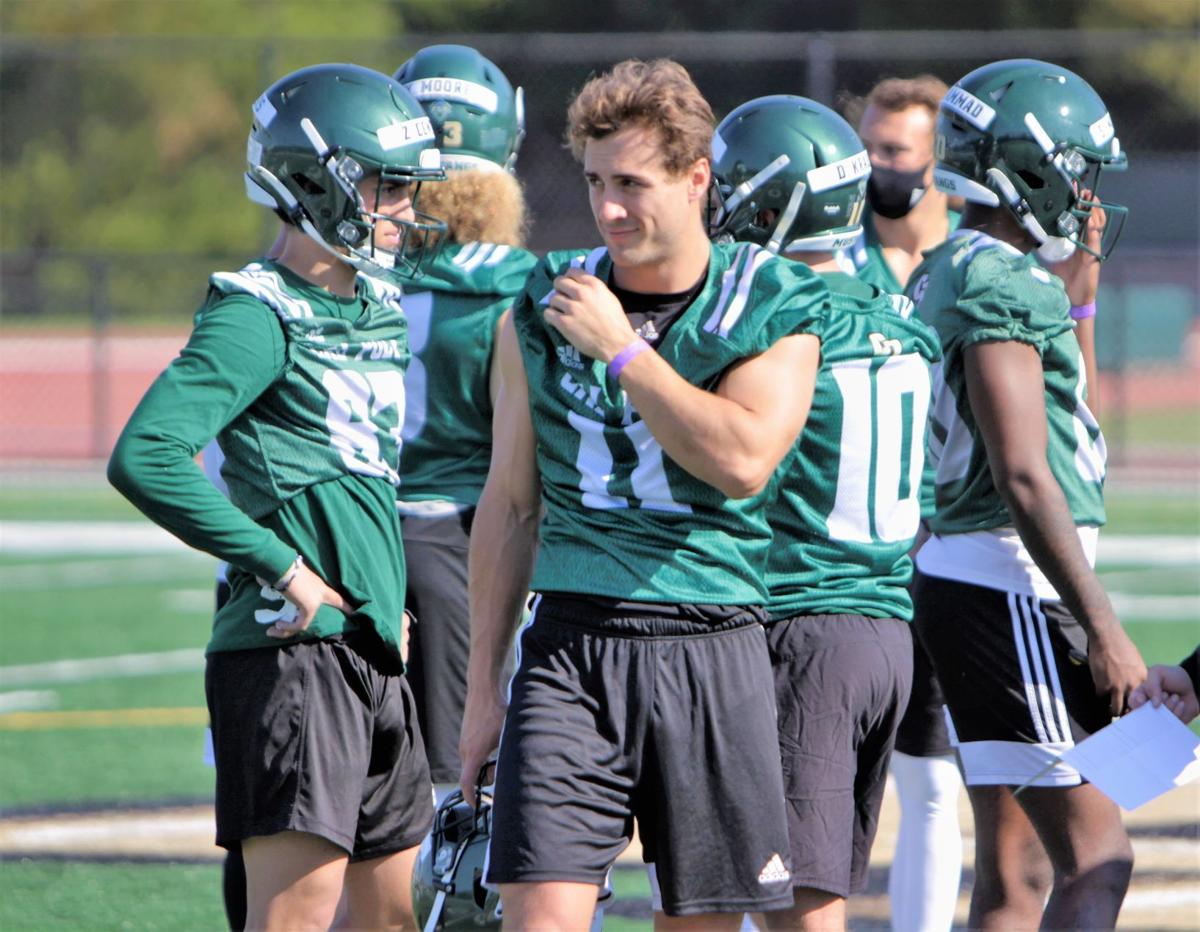 Cal Poly receiver CJ Cole is seen during a fall practice at Doerr Family Field in San Luis Obispo. Cole is entering his junior season with the Mustangs and feels he fits in better with a new position and a new offensive scheme under first-year coach Beau Baldwin. 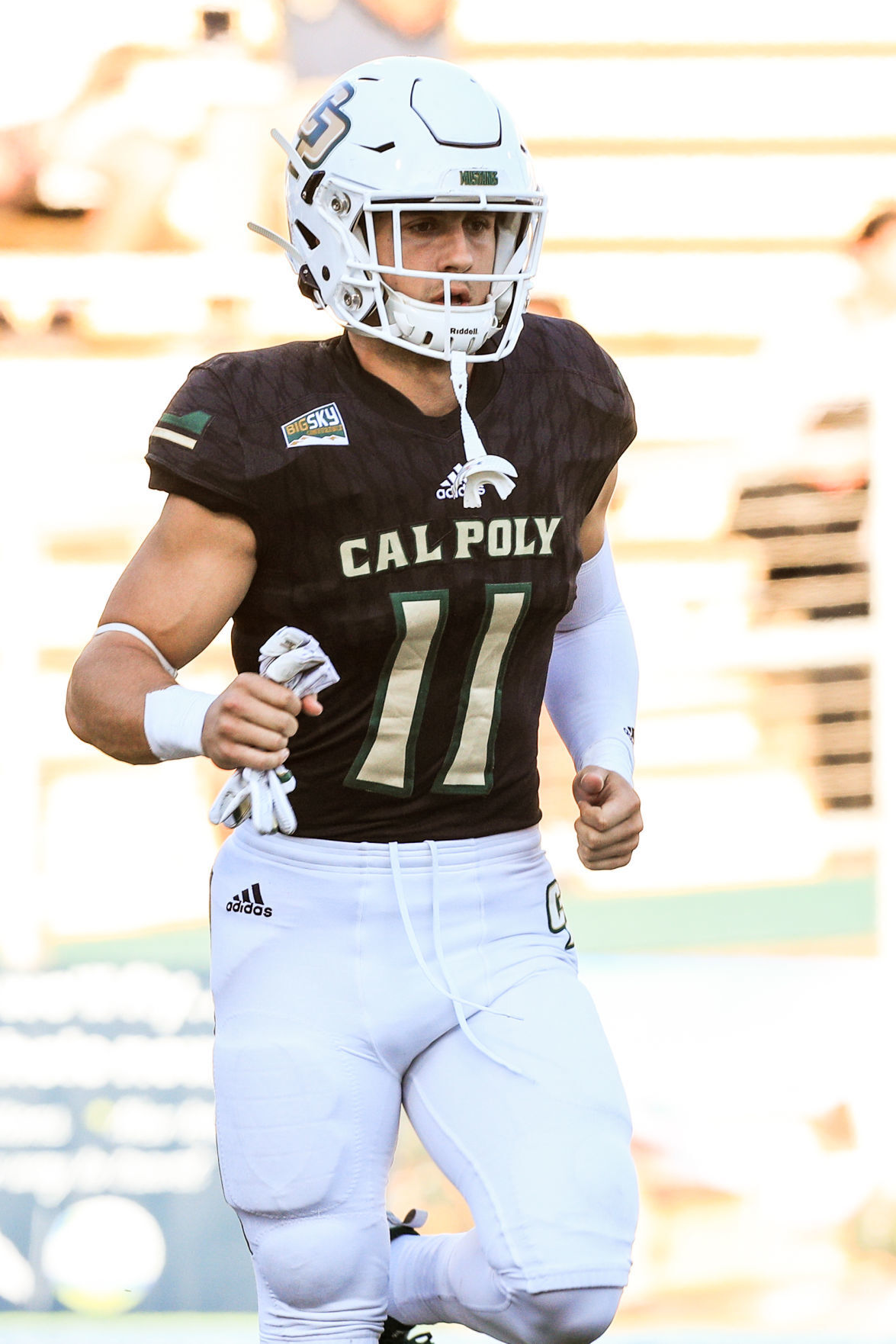 CJ Cole has a fresh slate at Cal Poly. And that's fine with him.

Cole, who found equal success as a receiver and running back at St. Joseph High School, is entering his fourth year with the Mustangs. But he's in his first year with a new coaching staff.

The Other Guys: Johnathan Ramos was a rare talent at Santa Maria High

This year, Cole has moved out to one of the receiver positions in new coach Beau Baldwin's offense.

"I'm real excited. That's what I played in high school so it's going to be fun," Cole said during a recent fall practice. "Going from high school to here, we ran the triple option for three years and now I'm getting back to that slot position. It's going to be exciting."

According to the school, Cole was expected to challenge Quentin Harrison and Leonte Huerta-Moore for a "starting nod at left wide receiver as a junior."

Cole never really found consistent work in Tim Walsh's triple-option offense, though he consistently proved to be a play-maker when he got his hands on the ball.

One of his first plays with the Mustangs was a 63-yard burst vs. Sacramento State as a red-shirt freshman. He had two carries for 72 yards in the 2019 spring game, including a 70-yard touchdown. He made one start last year vs. Weber State and his longest run a year ago was a 23-yard jaunt in the opener vs. San Diego, when he had a season high of 38 yards.

"I know there's going to be a lot of rotation in the offense, rotating in fresh legs," Cole said. "The coaches are all about playing who's hot. If you're hot, you're staying in. There are a lot of opportunities out there, if you play well you'll get a shot."

What's former Dunn soccer star Rodney Michael been up to? Scoring goals in bunches at UCSB

"It's alright... that's just football," he said. "There's injuries. I wanted to be out there at the start, but I'll be ready in plenty of time."

Cole was a star receiver at St. Joseph before he switched to running back as a senior in 2016. He rushed for 1,328 yards and 14 touchdowns that year, including a 305-yard outing vs. Pioneer Valley.

As a junior, Cole caught 64 passes for 950 yards and 11 touchdowns. As a sophomore, he had 42 receptions for 625 yards and six touchdowns.

Cole says he's grown quite a bit since his high school days, adeptly handling a full-time class load with the rigors of high-level college football.

"I've evolved so much, it's crazy," he said. "I'm in my fourth year, my fourth fall here. I have about another year and a half of school, and the NCAA gave us another year of eligibility. So we're just taking it day by day, we're playing it how we can. It does feel different being an older guy on the team. But, again, everything is new, everything is fresh. We were talking about the depth chart earlier, but we're all new with the coaches here. It's a fresh slate and we're just out here doing what we can.

"I like it though, the competition is high and that promotes better football."

Cole said when he finishes up his degree in Wine and Viticulture at Cal Poly he hopes to "stay on the Central Coast and stay local."

The Mustangs are slated to kickoff a six-game, all Big Sky Conference season on Feb. 27 vs. Southern Utah.

What you need to know for Friday, November 20

What you need to know for Friday, November 20

Weekly recap: A collection of our top stories from this week

Make sure you don't miss out on any of our top headlines from the last week with this collection.

After breaking into the varsity rotation as a freshman at Mission Prep, Adlesh went on to score nearly 2,000 points (1,958) over four seasons, leading the Royals to a PAC 8 League championship and nearly 100 total wins.

'It would be devastating to the kids:' Coaches have questions as uncertainty clouds football season

"If we aren’t able to start the acclimation period on Dec. 7, the football season will either be canceled or postponed," Santa Maria High football coach Dan Ellington said this week. "If they postpone the season to March, that will affect multiple-sport athletes and create a scheduling nightmare.

The Other Guys: A look back on Zach Burg's versatile career at Righetti

Zach Burg was a pretty darn good football player during his days at Righetti High.

Cabrillo's Britney McCune and the injury that altered a season

What could have been. That's a question that still surrounds the 2017-18 Cabrillo High's girls basketball season. A team that went 27-4 and 14-0 in its league while making a CIF divisional final, still has what-ifs? Absolutely.

Matt Willkomm made the most of his two seasons on the Arroyo Grande High varsity basketball team.

JoJo Walker's immense talent was clearly visible during his days at St. Joseph.

Graduate forward Riley Till led a quartet of double-digit scorers with 17 points as Cal Poly opened its 2020-21 men’s basketball season with a 100-46 victory over Bethesda on Friday afternoon.

Blake Jaeckels lived up to lofty expectations with Knights

Blake Jaeckels had big shoes to fill heading into the 2014 football season.

Cal Poly receiver CJ Cole is seen during a fall practice at Doerr Family Field in San Luis Obispo. Cole is entering his junior season with the Mustangs and feels he fits in better with a new position and a new offensive scheme under first-year coach Beau Baldwin.