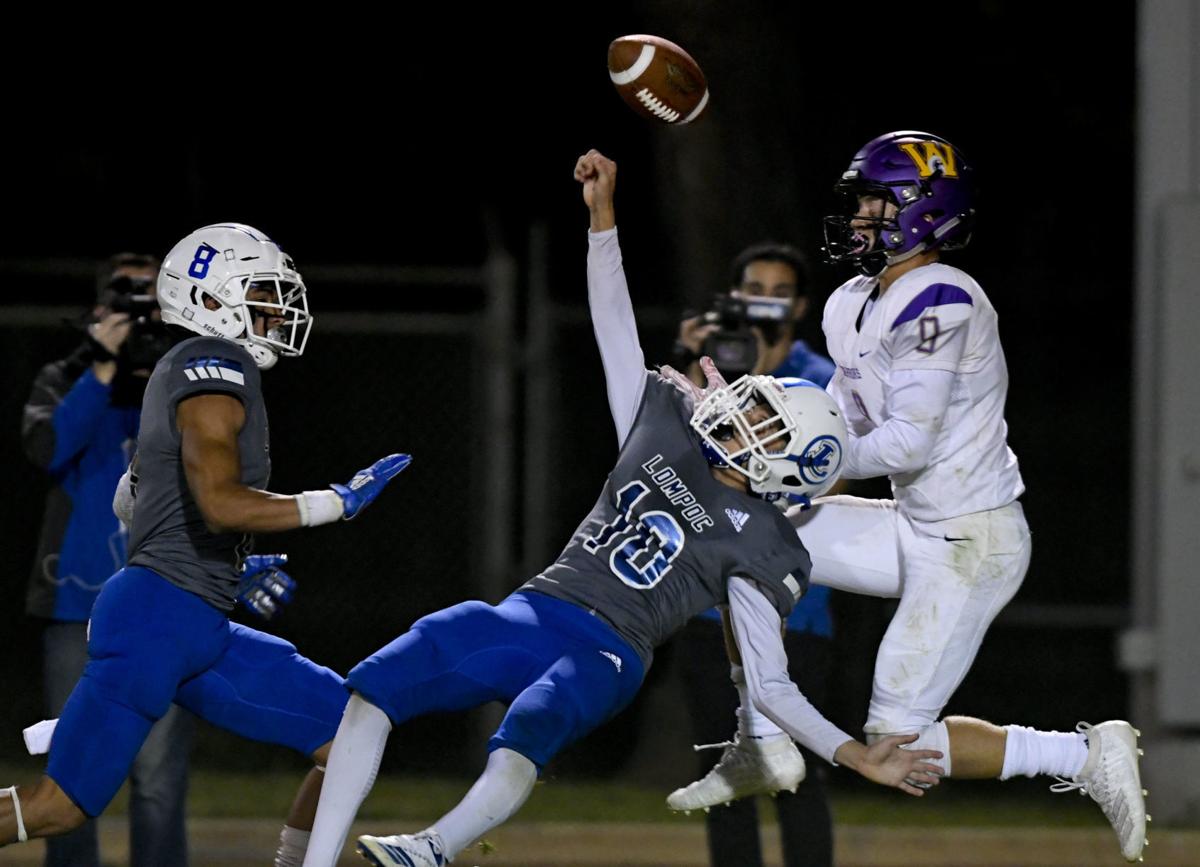 Lompoc's Deville Dickerson (10) knocks away a pass to Righetti's Jake Steels, allowing Oscar Tenorio, left to intercept the ball at Huyck Stadium during a 2019 game. 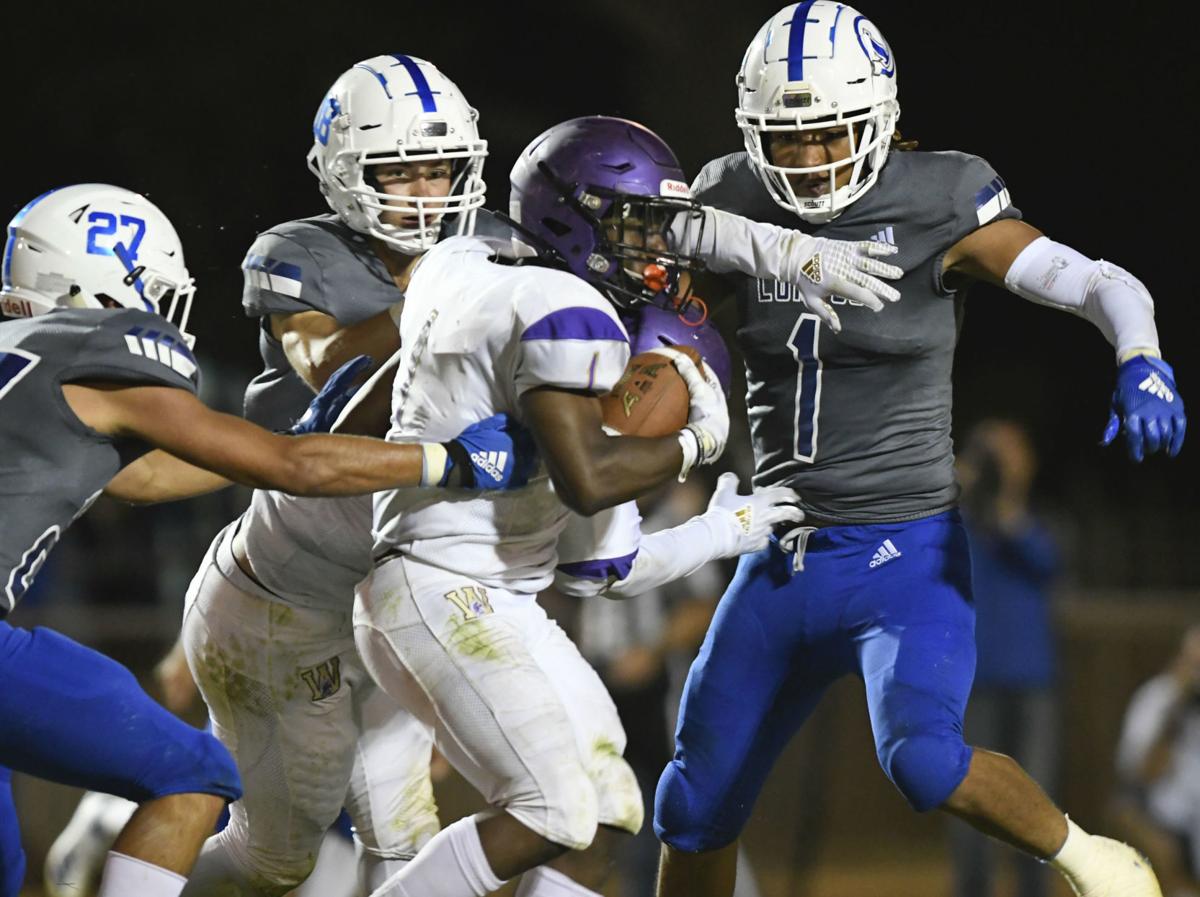 Righetti's Kidasi Nepa tries to get away from Lompoc's Anthony Arias, Luke Gardner and Leondre Coleman at Huyck Stadium during a game in August of 2019. 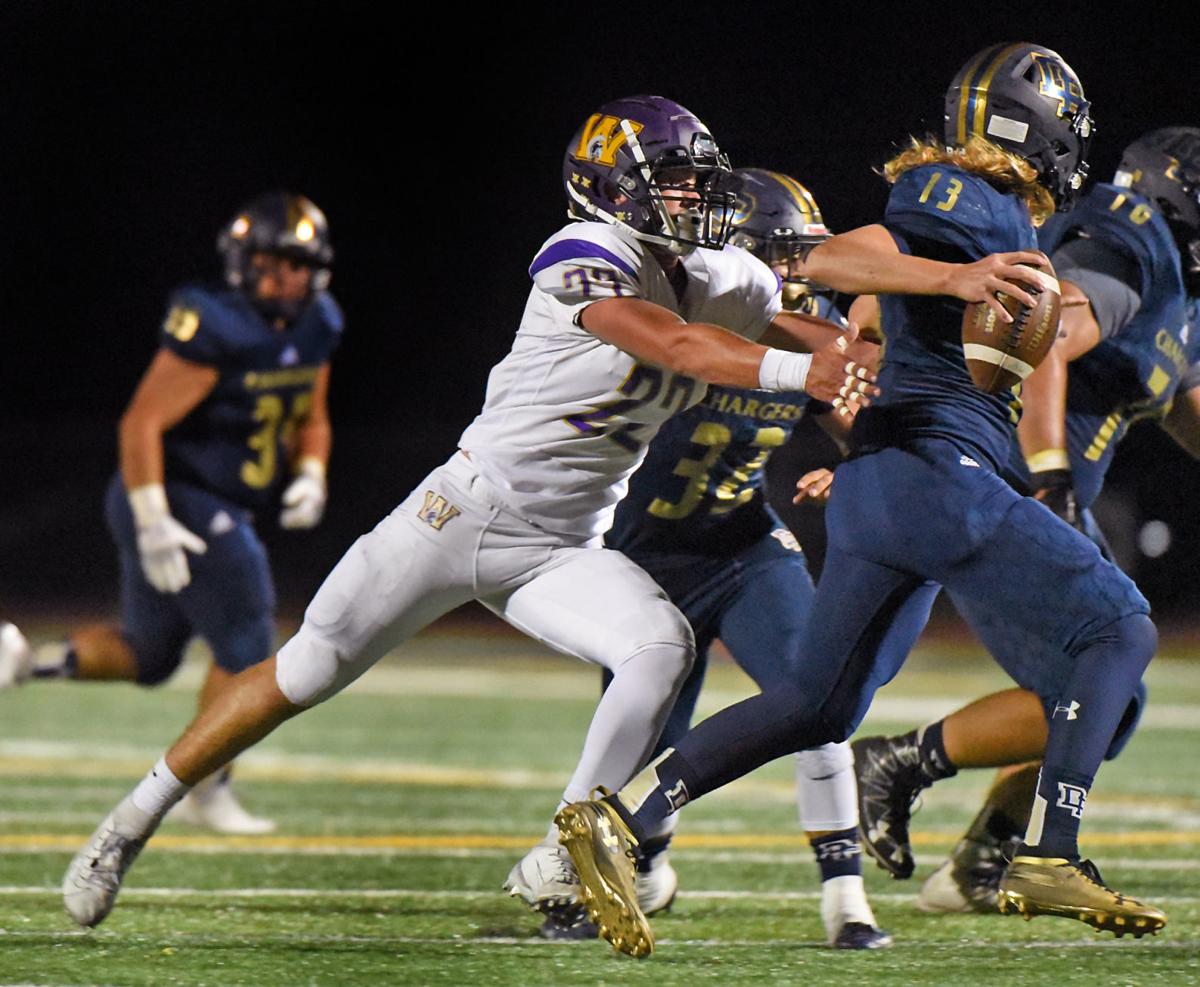 Righetti's (22) Ryan Boivin closes in for a sack of Chargers QB Josiah Severson (13) in the first quarter of a game in September of 2019.

I think we can agree on one thing: We all want a safe and complete high school football season. I'll be grateful to have a season, even if it starts in January.

At the same time, there's a certain aspect of the upcoming high school football season that's really caught my eye as the season grows near.

Is every Southern Section team really playing 10 football games without a bye?

"His presence will definitely be missed, on the sidelines and in the lives of those who knew and loved him:” Ben Castro, youth basketball coach, dies at age 44

When the high school sports seasons were altered over the summer, cramming all sports into two seasons instead of the typical three, there was a lot of information to take in, leaving us with a lot of questions.

But one question I haven't been able to quite figure out: Why did the CIF Southern Section choose to forego a bye week for the football season, forcing all member schools that are playing a 10-game season to play all 10 games in consecutive weeks.

The CIF-SS high school football season is 64 days. Hundreds of high school teams in the Southern Section will all play 10 games in that span with no weeks off.

In going this route, the Southern Section kept the complete playoff structure in place, with a first round, quarterfinal, semifinal and championship. Then there's also the state playoffs, which have been "streamlined."

Time to vote: It's the last day of the first round in our Player of the Decade tournament

Is asking high school students to play 10 games in 10 weeks in their best interest? Especially in the midst of a pandemic?

I'm not so sure. A person I've spoken with, someone with detailed knowledge of California high school athletics, said they feel that decision boils down to one thing: Money.

The CIF-SS keeping a complete playoff format can create some extra revenue with all those first-round playoff games throughout the section. And, let's face it, schools certainly need the cash. But at what cost? I don't think the move was made with just dollar signs in mind, but I think it could've played a factor.

Playing 10 straight games without a break isn't completely unheard of. Arroyo Grande has done it recently, with 10 straight games then a bye in the final week of the regular season before the playoffs start. Some schools have been forced to start the season with a bye.

The Other Guys: Scotty Cusack was lightning in a bottle

Cusack never topped 1,000 yards rushing in a single season during his three-year varsity career at St. Joseph. Nevertheless, just by watching him play, you'd see he was one of the best the Central Coast had seen over the last decade.

But imagine every school in the largest section in the state doing it at once in January after a year of dealing with a pandemic. It's going to be a major challenge.

The CIF Central Section decided to keep its bye week and cut a week out of the postseason, basically starting the playoffs in the quarterfinals. So, for instance, Santa Maria High School will have a typical 10-game season with a bye week. If the Saints do make the playoffs, they'll basically start in the quarterfinals. A win there moves them into the semifinals and another win to the Central Section championship game. One final game would be the state championship.

If a Southern Section school, say like Lompoc High, made a similar run it'd be 10 regular season games in 10 weeks, followed by four straight CIF-SS playoff games and one more state game. That's 15 games in 15 weeks.

Some Southern Section school will certainly play that schedule out and it'll be a grind.

Another aggravating factor in this was that the CIF-SS schedules don't match up with schools in the Central Section. That meant that Southern Section schools playing Central Section schools had to realign their schedules. That in turn forced area schools to switch the week they're playing schools from another section. Just another hassle.

Will everything work out for the Southern Section? I hope so, but it's going to be a wild ride.

Former St. Joseph star Aly Beebe is the No. 1 seed.

Beebe, who helped the Knights win back-to-back CIF Southern Section titles during her freshman and sophomore seasons, won a CIF State title her junior season as she developed into one of the most dominant players in the entire state, if not the country.

Beebe signed with Stanford after graduating from St. Joseph in 2012, though never played for the Cardinal and eventually retired after numerous injuries to her knee.

No. 2 Ashlyn Herlihy vs. No. 15 Ravynn Anielski

Arroyo Grande graduate Ashlyn Herlihy is the No. 2 seed. Herlihy averaged 22 points, 9.7 rebounds, 1.4 steals and 5.5 blocks per game as a senior at Arroyo Grande. She was named the Times' All-Area MVP as a junior.

Herlihy went on to play at Santa Clara. She redshirted there in 2016-17 and has grown into a starting role the last two seasons, averaging over 10 points and 7 rebounds a game.

Herlihy will face No. 15 seed Ravynn Anielski in the first round.

Anielski was named the Times' All-Area MVP that year and she earned Ocean League MVP honors.

Former Righetti standout Molly Schlemer is the No. 3 seed. The 6-foot-5 post averaged 15 points and 8.3 rebounds a game in her final season with the Warriors. She also blocked 2.5 shots a game.

Schlemer will face No. 14 seed Syenna Ramirez. She averaged over 17 points a game as a senior at St. Joseph, going from role player to the best player on her team.

Ramirez culminated her St. Joseph career with a 427-point senior season. In addition to scoring 17 points, Ramirez added 2.2 assists, 4.3 rebounds and 3.3 steals per game that season.

Another former Righetti star, Mariah Cooks, is the No. 4 seed. Cooks was named the PAC 7 League MVP as she averaged 21.7 points per game and 12 rebounds in league play as a senior.

She led the Warriors to the quarterfinals of the playoffs averaging 22 points and 12.6 rebounds per game. She also earned All-CIF honors. Cooks went on to play four seasons at Washington State in the Pac-12.

Cooks will face Simone Swain, the No. 13 seed, in the first round. Swain won a CIF-SS title at Valley Christian.

Tatiana Dunlap, another former St. Joseph standout, is the No. 5 seed. Dunlap, an all-time great defender, scored over 1,300 points in three seasons with the Knights.

During her senior season, the 5-foot-8 guard averaged 23.7 points, 3.0 assists, 9.2 rebounds and 2.6 steals per game as the Knights went 19-9. Dunlap played at Cal State San Bernardino and Cal Lutheran.

Santa Ynez grad Hailey King, the No. 12 seed, will face Dunlap in the first round.

King, who suffered a torn ACL and missed nearly all of her junior season before she made it back to the Pirate lineup as a senior in 2010-11, scored 427 points in her final prep season, leading Santa Ynez to the Los Padres League title, the Pirates' most recent league championship in girls hoops. King played at Cal State Fullerton.

No. 6 Kaitlyn Flowers vs. No. 11 Danielle Morgan

Morgan topped 1,000 career points with the Braves, finishing her prep career with 1,186 points.

Erin Jenkins, the former Cabrillo standout, is the No. 7 seed. Jenkins and Beebe are the only back-to-back All-Area MVPs of this past decade.

Jenkins currently plays at Northwest Nazarene University. Jenkins averaged 20.3 points, 8.6 rebounds, 3.4 assists and 3.3 steals per game as a senior with the Conqs.

Jenkins meets the No. 10 seed, Shnyia Tell, in the first round. Tell earned one All-Area MVP honor during her time at Pioneer Valley.

At 5-foot-10, Tell averaged 10 rebounds a game for her entire four-year varsity career. She averaged a double-double in both her junior and senior seasons.

No. 8 Danita Estorga vs. No. 9 Heather Madrigal

Danita Estorga, yet another former Righetti great, is the No. 8 seed. Estorga, currently playing at Biola University, averaged 15.6 points, 8.2 rebounds, 2.8 assists, 2.5 steals and 1.4 blocks per game over her final two seasons with the Warriors.

She helped Righetti go 47-10 in the final two years with the program. They went 26-2 in league those two seasons.

Estorga will meet Heather Madrigal, the No. 9 seed, in the first round. Madrigal won four CIF titles in four years in high school, winning either a CIF State championship or a CIF Southern Section crown every year.

Madrigal went 48-0 in league in high school, spending the first three years at St. Joseph before transferring to Arroyo Grande.

Nipomo and Arroyo Grande high school student-athletes began voluntary on-campus workouts Oct. 5. This week, the athletes were finally able to use some athletic equipment. But they could never, under any circumstance, share that equipment with a teammate.

Following the current 2020-21 academic year, the school said, it will discontinue supporting varsity lacrosse, men's tennis and wrestling. Fresno State said those cuts will save about $2.5 million, "once all scholarships and other contractual obligations have been fulfilled."

From the Vault: Duane Solomon went from a basketball dream to Olympic reality

Before Solomon would go on to win a state title at Cabrillo High, run for USC in college and finish fourth in the 800-meter Olympic final in 2012, Solomon was a standout basketball player in Lompoc's youth league at the Boys and Girls Club.

Last week, I wrote a column with this question as its premise: Why is just about every CIF Southern Section football team playing 10 games in 10 weeks, with no bye week, in the upcoming season?

Lompoc's Deville Dickerson (10) knocks away a pass to Righetti's Jake Steels, allowing Oscar Tenorio, left to intercept the ball at Huyck Stadium during a 2019 game.

Righetti's Kidasi Nepa tries to get away from Lompoc's Anthony Arias, Luke Gardner and Leondre Coleman at Huyck Stadium during a game in August of 2019.

Righetti's (22) Ryan Boivin closes in for a sack of Chargers QB Josiah Severson (13) in the first quarter of a game in September of 2019.