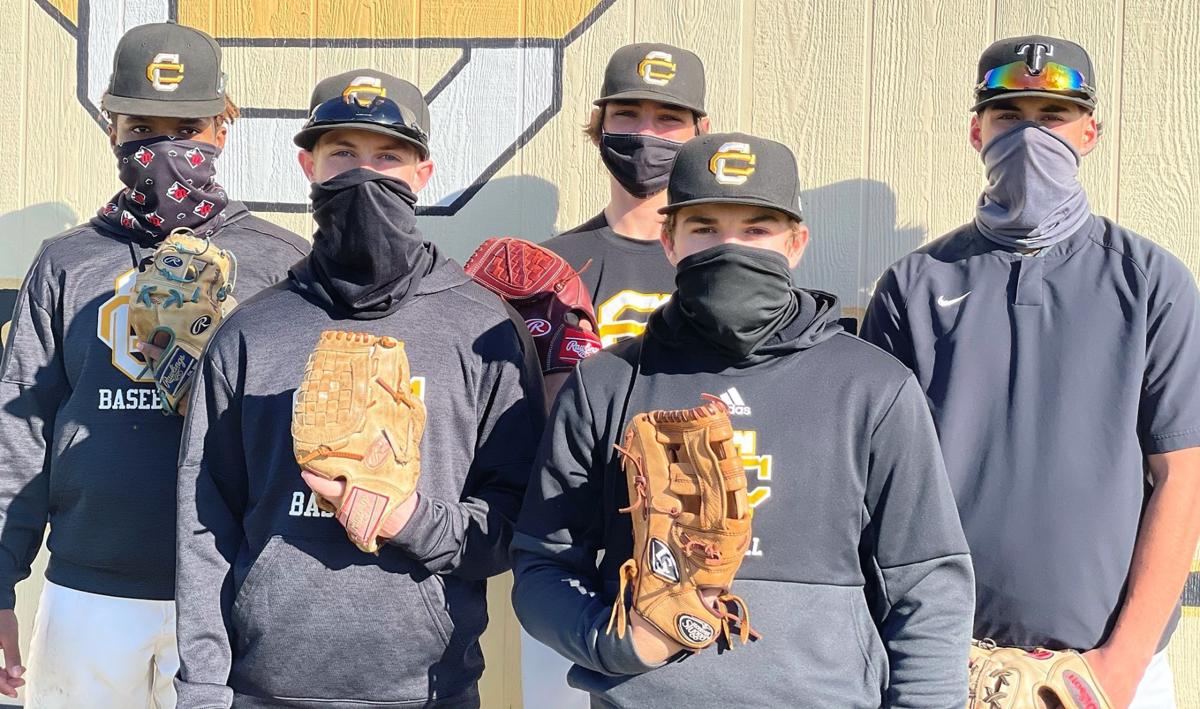 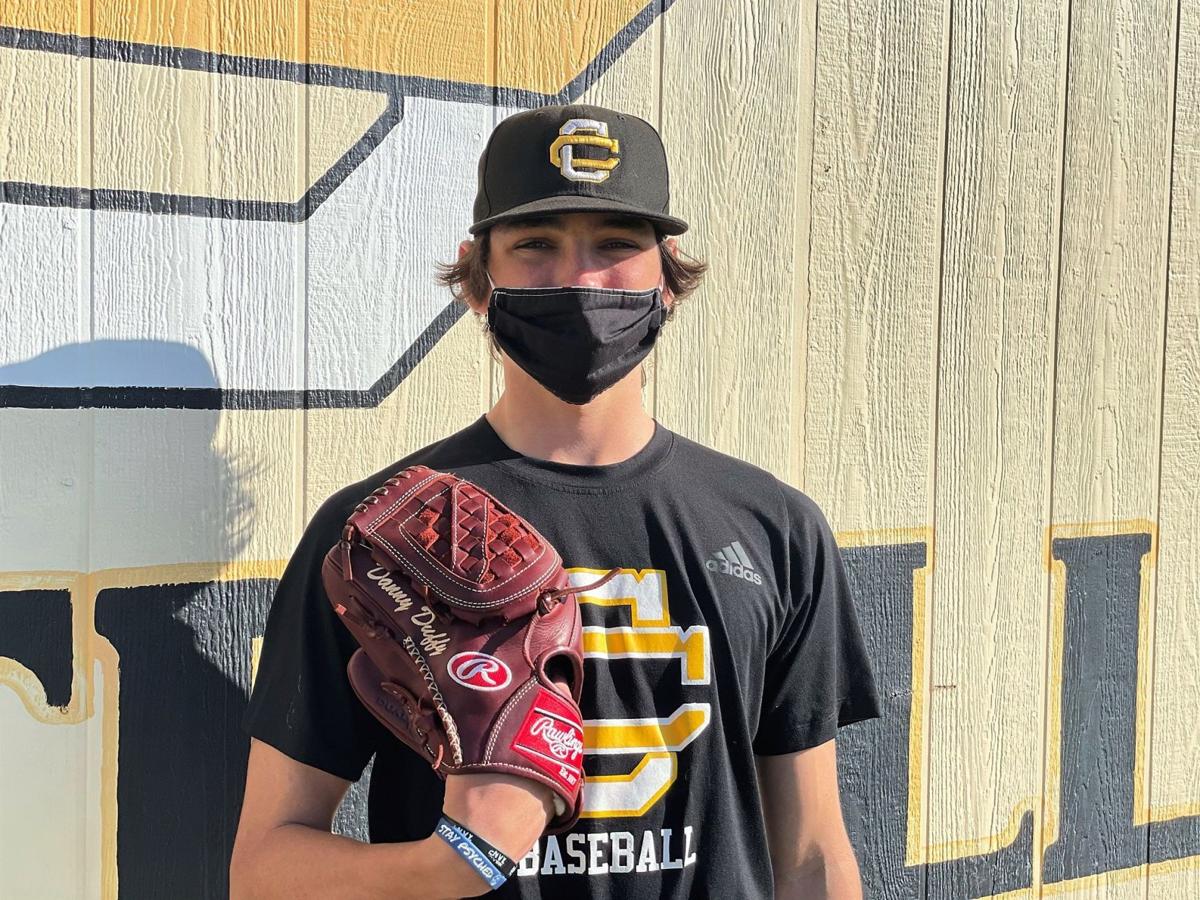 Luke Kovach, a left-handed pitcher for the Conqs, shows off his glove which features the signature of a former Cabrillo left-hander: Danny Duffy. 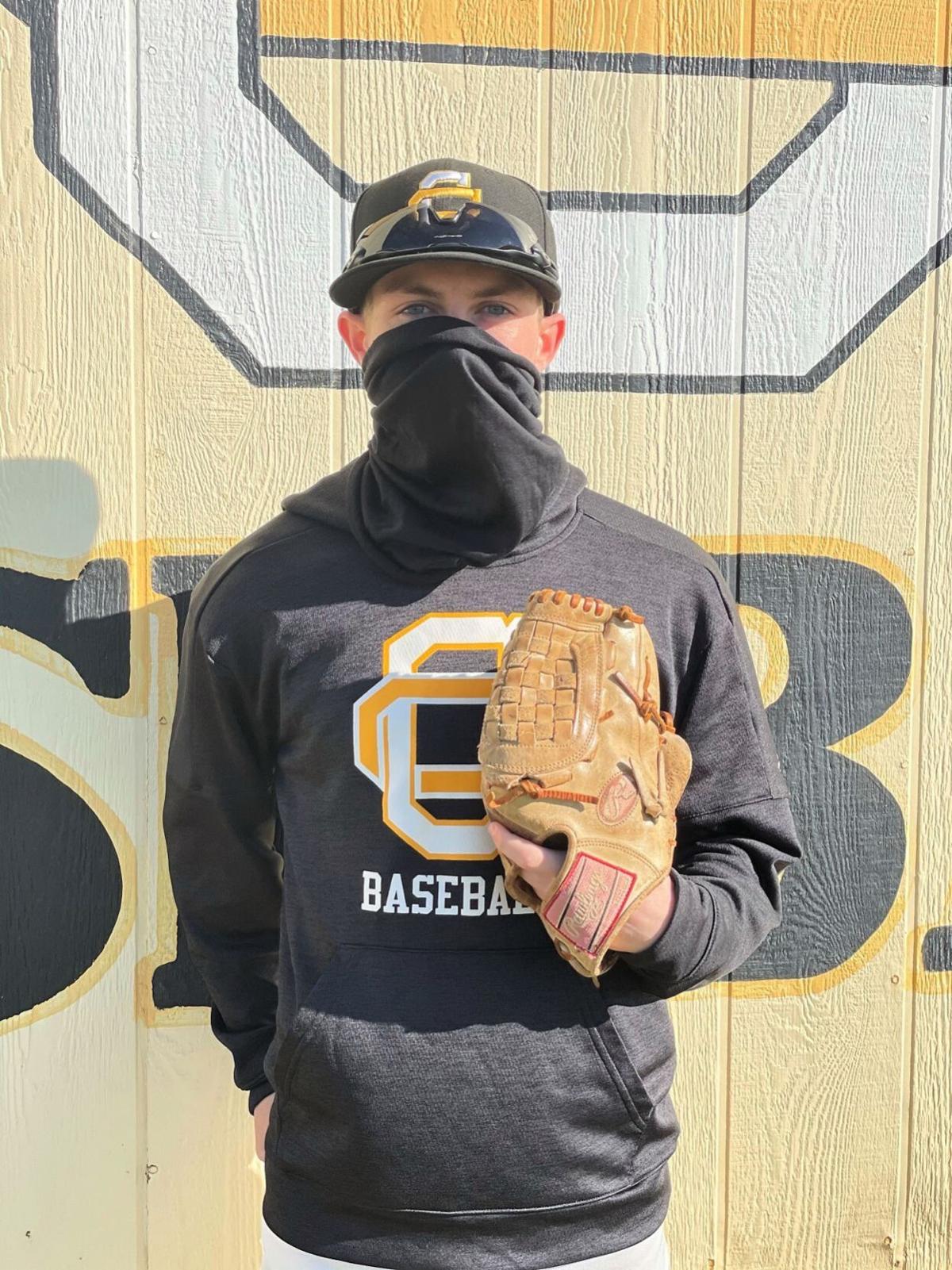 Cabrillo's Conner Thomas returns to the 2021 team after last year's season was cut short five games into it. 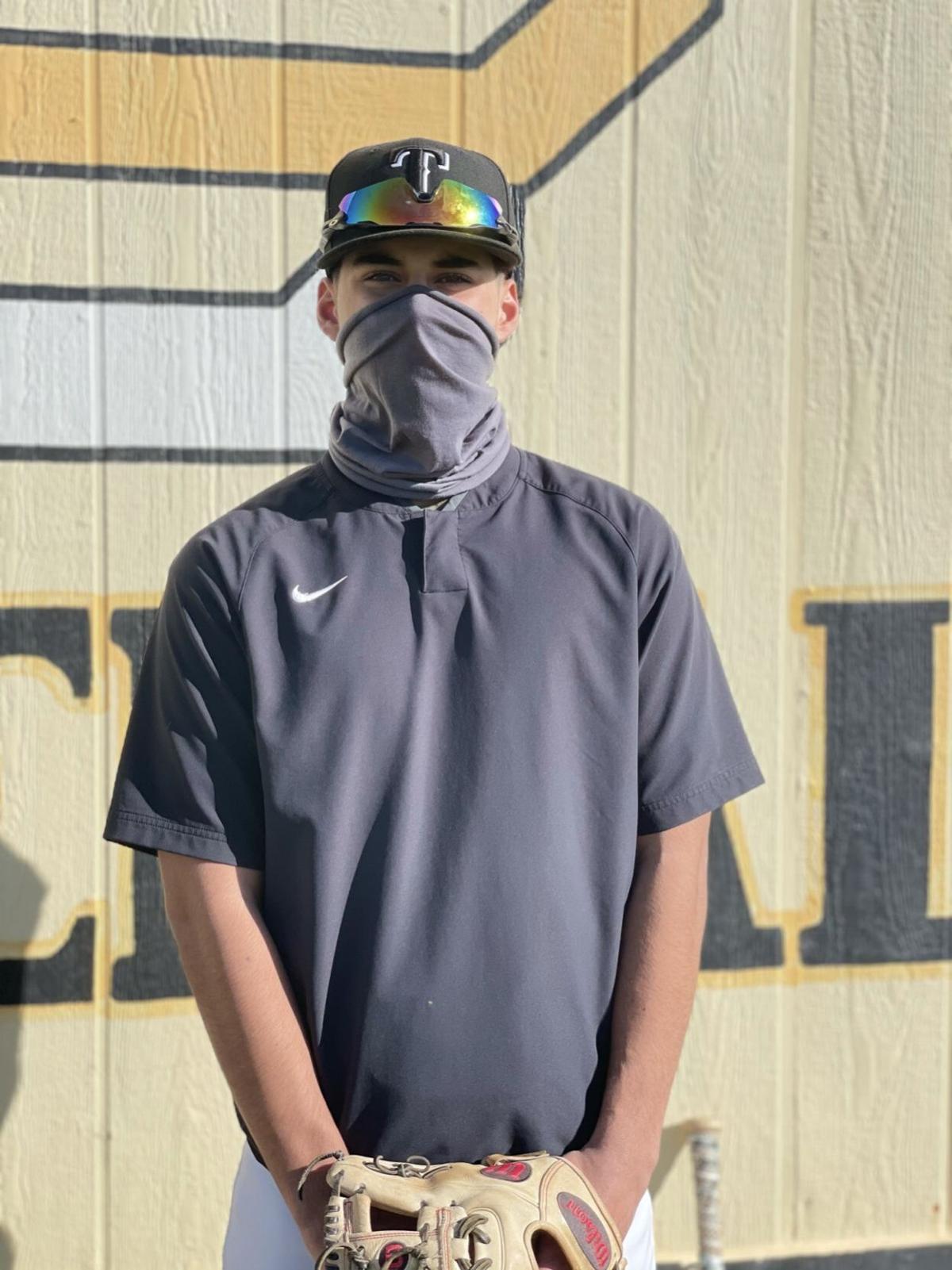 Cabrillo's Hunter Barthel returns to the Conqs coming off a surgery. Coach Cole Osborne said he expects Barthel to be ready for the start of the season. 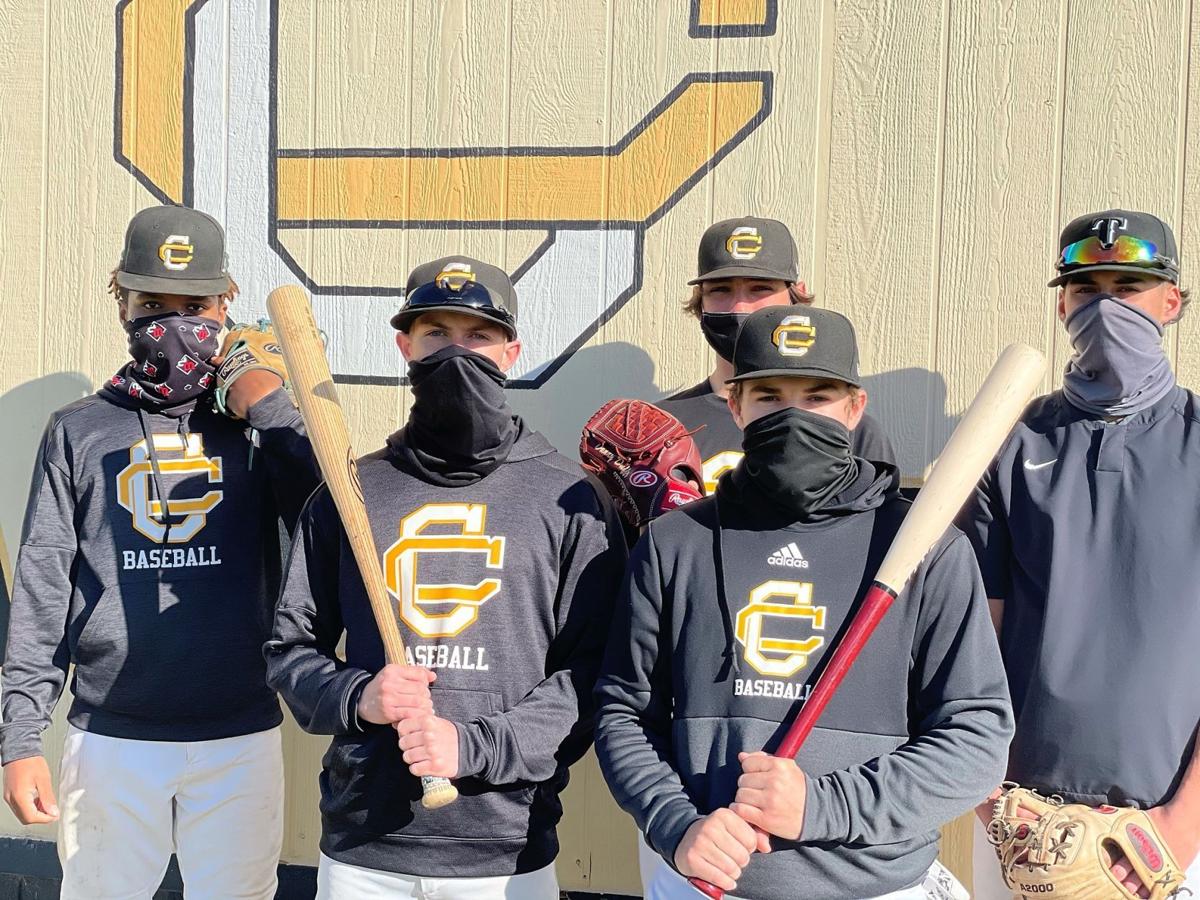 Area high school baseball teams have returned to their respective diamonds as hopes for a 2021 spring season have been restored. We'll be highlighting area teams ahead of the campaign that should start in March.

The 2020 season did not go as planned for the Cabrillo baseball team.

The Conquistadores got just five games in last spring before the season was suspended and eventually canceled due to the coronavirus pandemic.

That resulted in seven Cabrillo seniors losing their final high school season and the rest of the varsity and junior varsity rosters losing out on a year of high school experience.

Cabrillo ended the year with an 0-5 record.

Now, the good news: The Conqs are back preparing for a 2021 season and have plenty of talent and experience back.

The Conqs feature senior left-hander Luke Kovach, who should be the No. 1 starter. They also have experienced seniors Trey Robison, Hunter Barthel and Conner Thomas.

The talented AJ Simmons returns and is expected to hold down the shortstop position. Simmons is an intriguing prospect at 6-foot-2, 170 pounds.

Cabrillo coach Cole Osborne got just five games into his first season as the head coach last year. Osborne says Austin Wolf, who graduated, is probably the top loss from the class of 2020.

Cabrillo has resumed full practices recently. They've been busy, spending about two hours per practice several days a week on the CHS campus.

"The energy is up for sure," Osborne said at a recent practice. "We've been talking about that a lot after having last year shut down so quickly and not having a chance to finish out the season. We've spent some time talking about making the most of the opportunity that we have in front of us, talking about living it up because we don't know what lies ahead."

Osborne said schools are still working through what a season would actually look like amid the coronavirus pandemic. The CIF Southern Section has set March 19 as the date the baseball season could start, with May 28 the date of the last league contest.

"I know the plan is to schedule league games first, that's the top priority," Osborne said. "Then we'll go from there."

Players have been practicing with masks. The players check in with coaches on arrival as part of COVID-19 protocols.

"Luke has been fun to watch, seeing him develop into an ace," Osborne said. "We've seen him not only physically grow, but also see his velocity go up and for him to develop into a captain and a leader."

Osborne said the team should be solid offensively and defensively. He follows the belief that a team's strength should lie up the middle of the field, with an emphasis on the catcher, middle infielder and centerfielder positions.

"I think we're going to have a good little squad," Osborne said. "I appreciate them pushing through this and being out here every day to get better."

Robison, Barthel and Thomas are some of the key returners. Simmons, the junior shortstop, says he thinks the senior class is a strong group that should lay down a foundation for the rest of the team.

"I'm excited four our senior class this year," Simmons said. "They got their junior seasons taken away and their senior season has been affected. A lot of juniors are coming back with some varsity experience as well and we're excited to get an opportunity out there."

Osborne said he expects junior Zach Radabaugh to compete for the starting catcher spot and Tanner Costa to likely start on the infield.

"We're hoping that Zach can be our guy back behind the plate," Osborne said. "We've got a couple other guys who could make an impact. Trevor Jure I think is going to have a good season. We've also got some injuries, which is tough. Hunter Barthel is coming off surgery but should be good to go when the time comes."

Cabrillo played two Channel League opponents last year, starting league play with a 5-1 loss to Lompoc. An 8-2 loss to San Marcos on March 9, 2020, was the final game the Conqs played.

For his career, Hernandez hit .380 with 103 total hits, 64 RBIs, 30 doubles and four home runs. During his final season with the Titans, Hernandez threw out seven of the 10 batters who ran on him.

Warriors, come out to play: Righetti busy prepping for 2021 season

Luke Kovach, a left-handed pitcher for the Conqs, shows off his glove which features the signature of a former Cabrillo left-hander: Danny Duffy.

Cabrillo's Conner Thomas returns to the 2021 team after last year's season was cut short five games into it.

Cabrillo's Hunter Barthel returns to the Conqs coming off a surgery. Coach Cole Osborne said he expects Barthel to be ready for the start of the season.