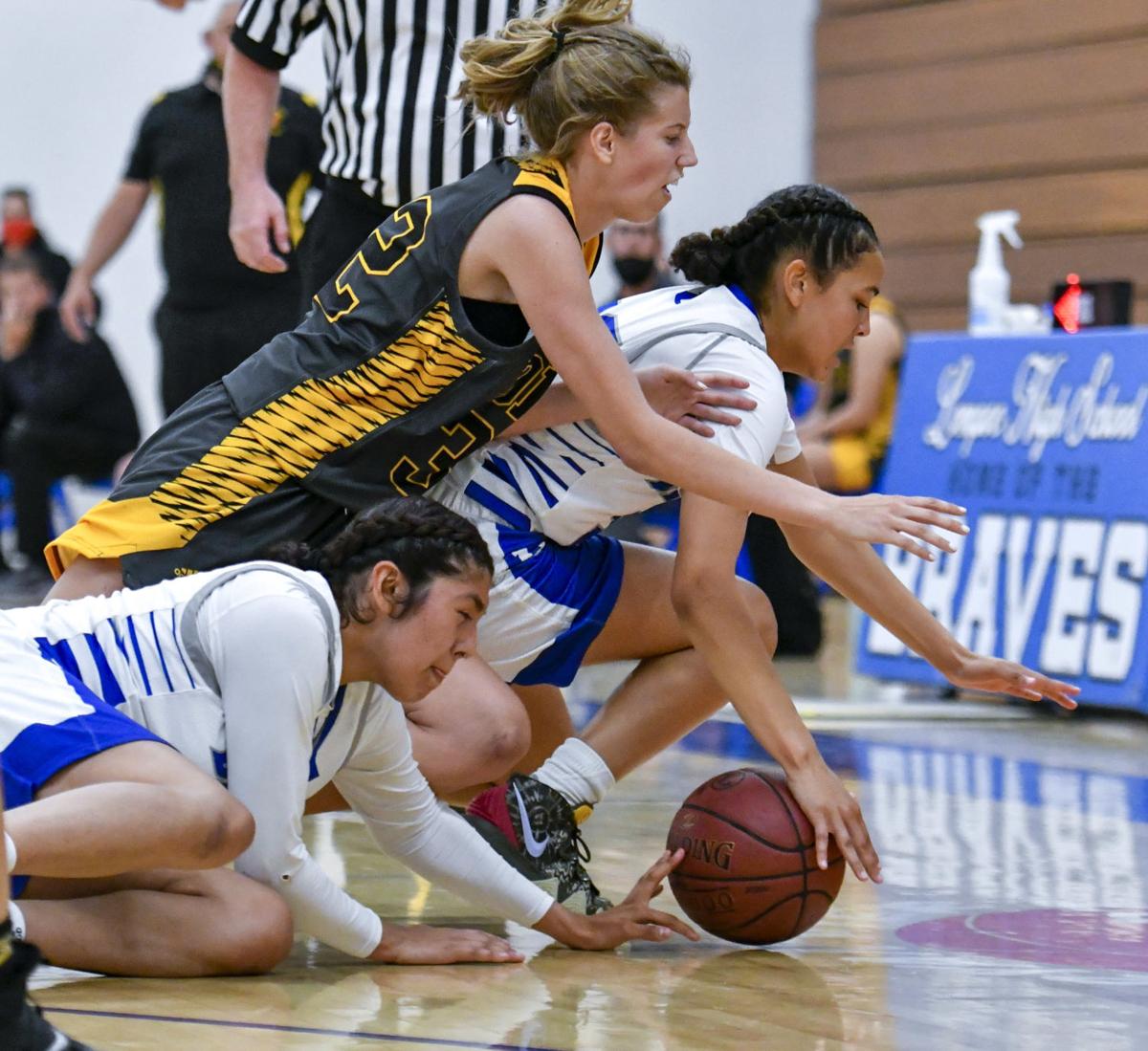 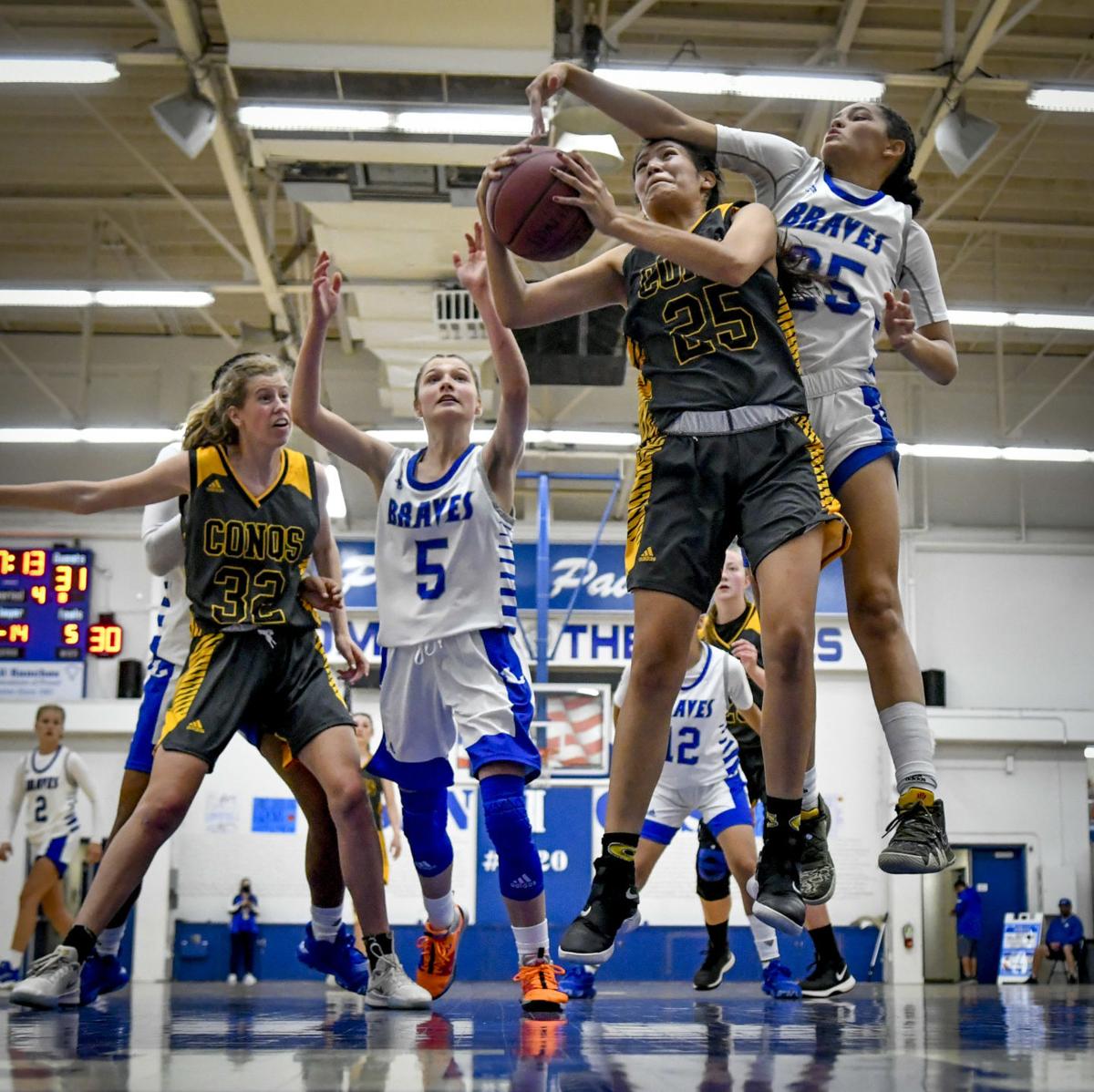 Cabrillo’s Gabby Cordova gets a rebound from Lompoc’s Makayla Figuereo. 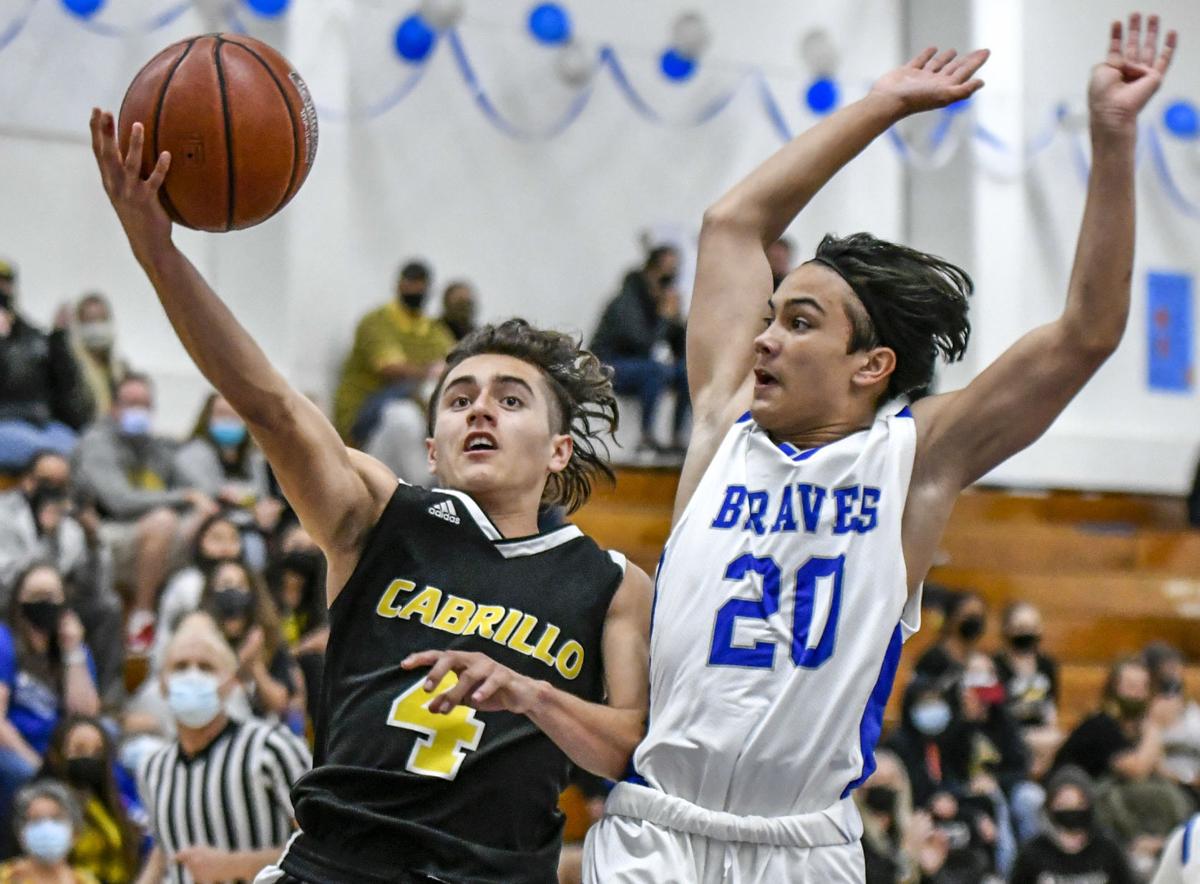 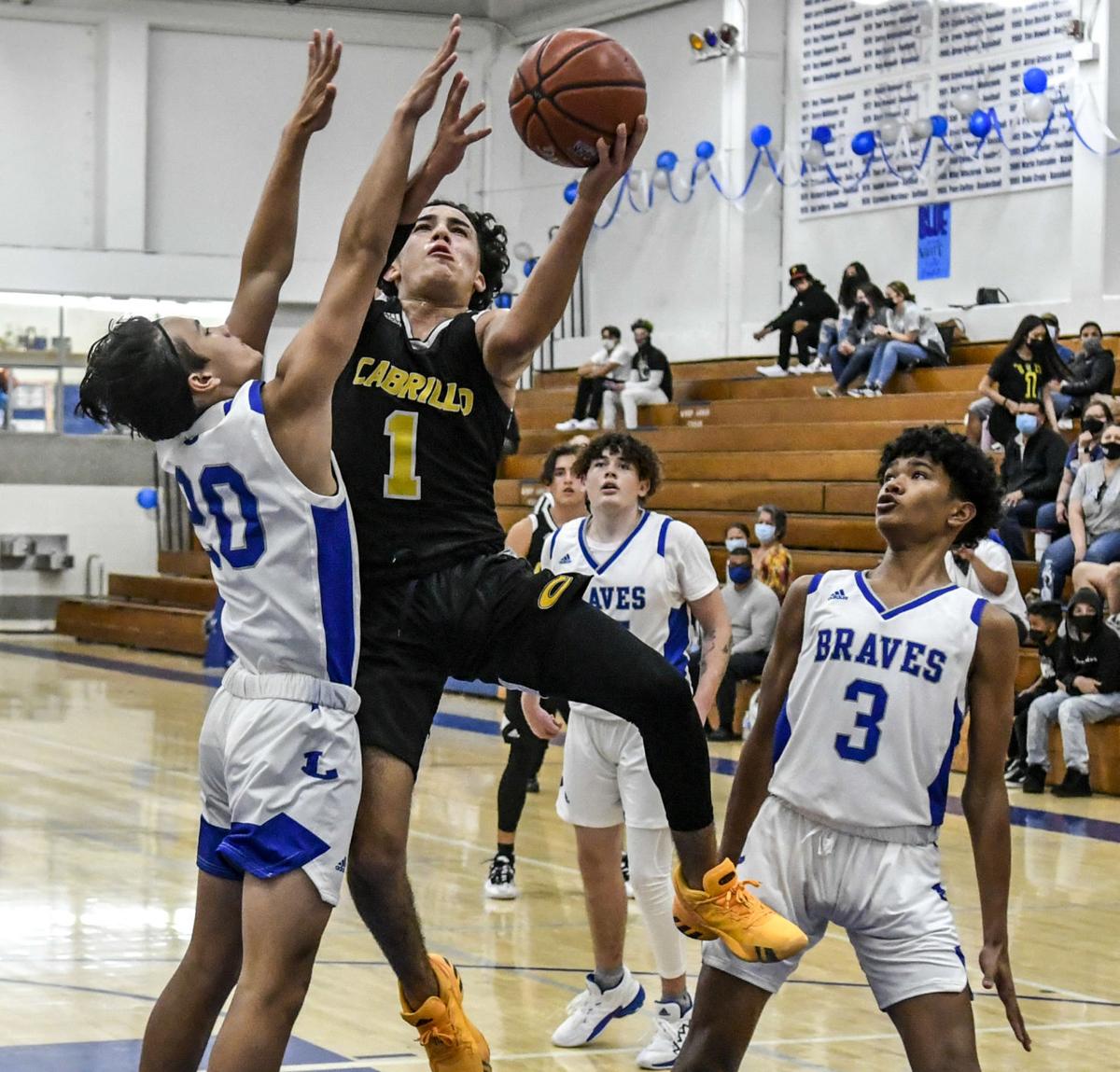 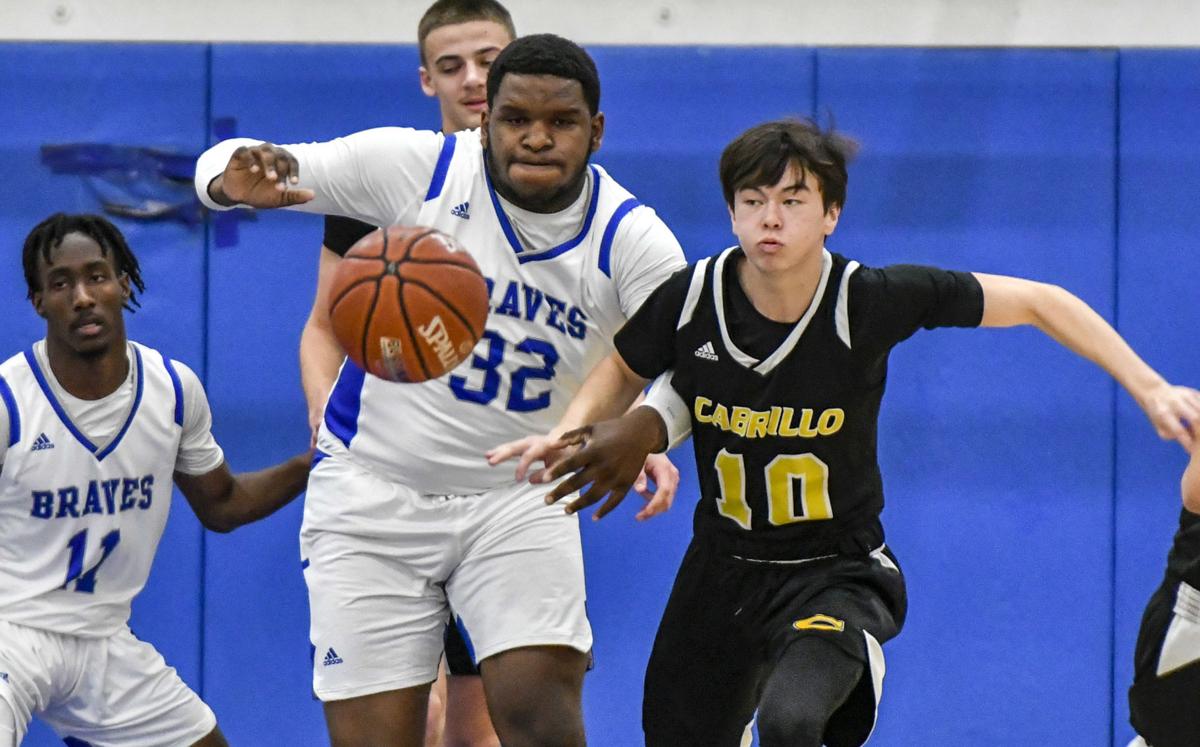 The Cabrillo girls team started the night's varsity games with a 40-20 win over the Braves. The Conquistadore boys then won the nightcap 67-48.

The win for the Cabrillo girls moved them to 2-2 on the season and 2-2 in Channel League games. Lompoc fell to 1-4 on the season.

Cabrillo junior Gabby Cordova had a big game against the Braves on Friday, scoring a game-high 15 points for the winners. Maiya McIntyre, another junior, added 13 points, with the two accounting for about 3/4 of the team's scoring.

The Cabrillo boys improved to 2-1 on the season with their win, while Lompoc's boys dropped to 0-4.

The Cabrillo boys were set to host Santa Ynez on Tuesday in their next game. Lompoc hosts Santa Barbara in another Channel League boys game.

The Cabrillo girls will play at Santa Ynez Tuesday. The Lompoc girls are at Santa Barbara.

The Hancock College men won a tri-meet on Friday at Bakersfield College.

Brandon, Valencia, Garcia and Joseph Archuleta then teamed up to win the 4x400 relay and Carpenter won the high jump with a season best mark. Brandon finished third in the long jump.

The Bulldogs then finished in the top four spots in the shot put and javelin as Jan Gutierrez won both events.

On the women's side, Sierra Skinner finished second in both the 1,500 and 800. Yasmin Mendez was second in the 400-meter hurdles.

The Bulldogs opened Western State Conference play with a sweep at home Thursday, winning the first game 13-1 and the second 10-5.

Travis Welker and Jacob Ruley headlined the day at the plate for the Bulldogs. Welker went 5-for-9 while tallying two runs and six RBIs. Ruley collected five RBIs, three runs, and notched one triple en route to a 4-for-7 showing.

Trevor Garcia (3-0) collected the win in the first game after punching out seven batters and surrendering one earned run through six innings of work. Nick Ahedo also made an appearance on the rubber to close the contest in the final frame.

In the second game, Vance Serrano scattered three hits, punched out three batters and surrendered zero runs through 4 2/3 innings of work but did not factor into the final decision as Lucas Earle collected the win.

Pioneer Valley coach Michael Bloodworth was expecting a rebuilding season for his Panthers this year.

It doesn't get much bigger than this for the Mountain League.

Cabrillo’s Gabby Cordova gets a rebound from Lompoc’s Makayla Figuereo.