Headed to the Hall of Fame: Lompoc High AD Claudia Terrones, the former Knight and Bulldog, to be inducted Wednesday night
Share this
{{featured_button_text}}
1 of 2 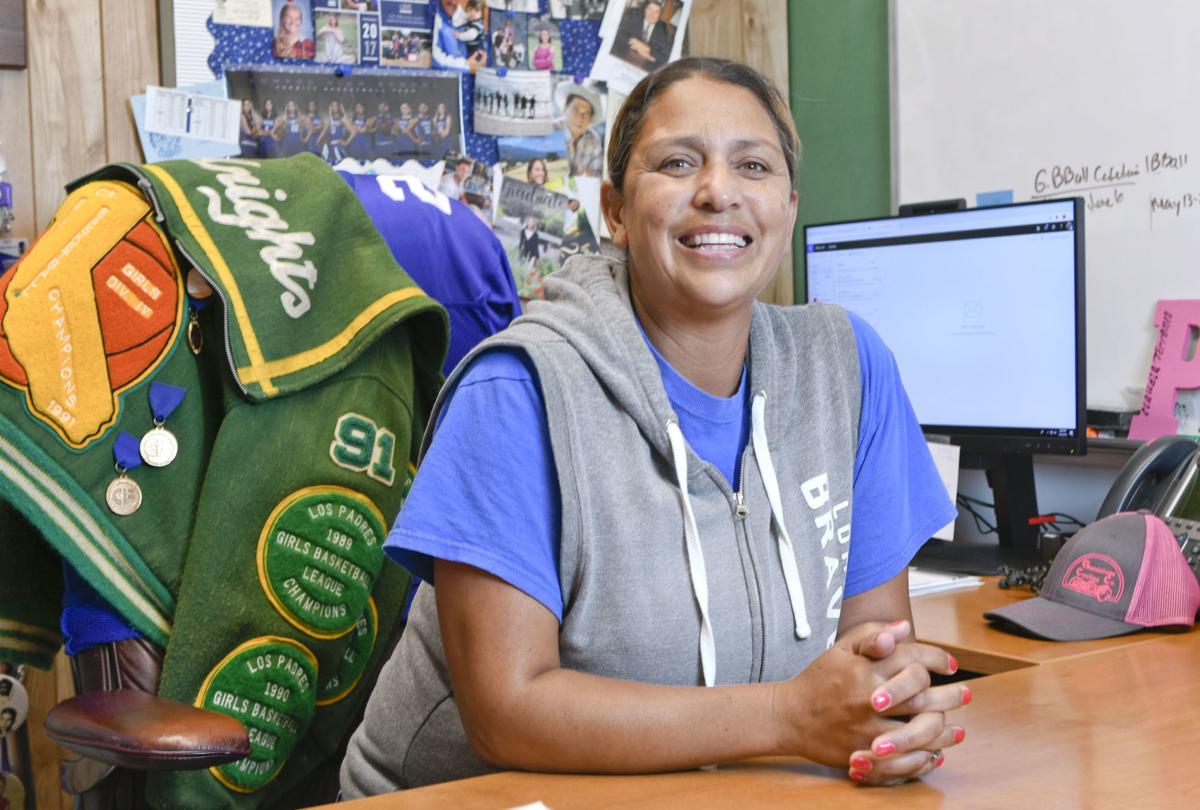 Lompoc High School athletic director Claudia Terrones, who is being honored by the North Santa Barbara County Athletic Round Table, has filled her office with memorabilia from her athletic career, as well as family photos. 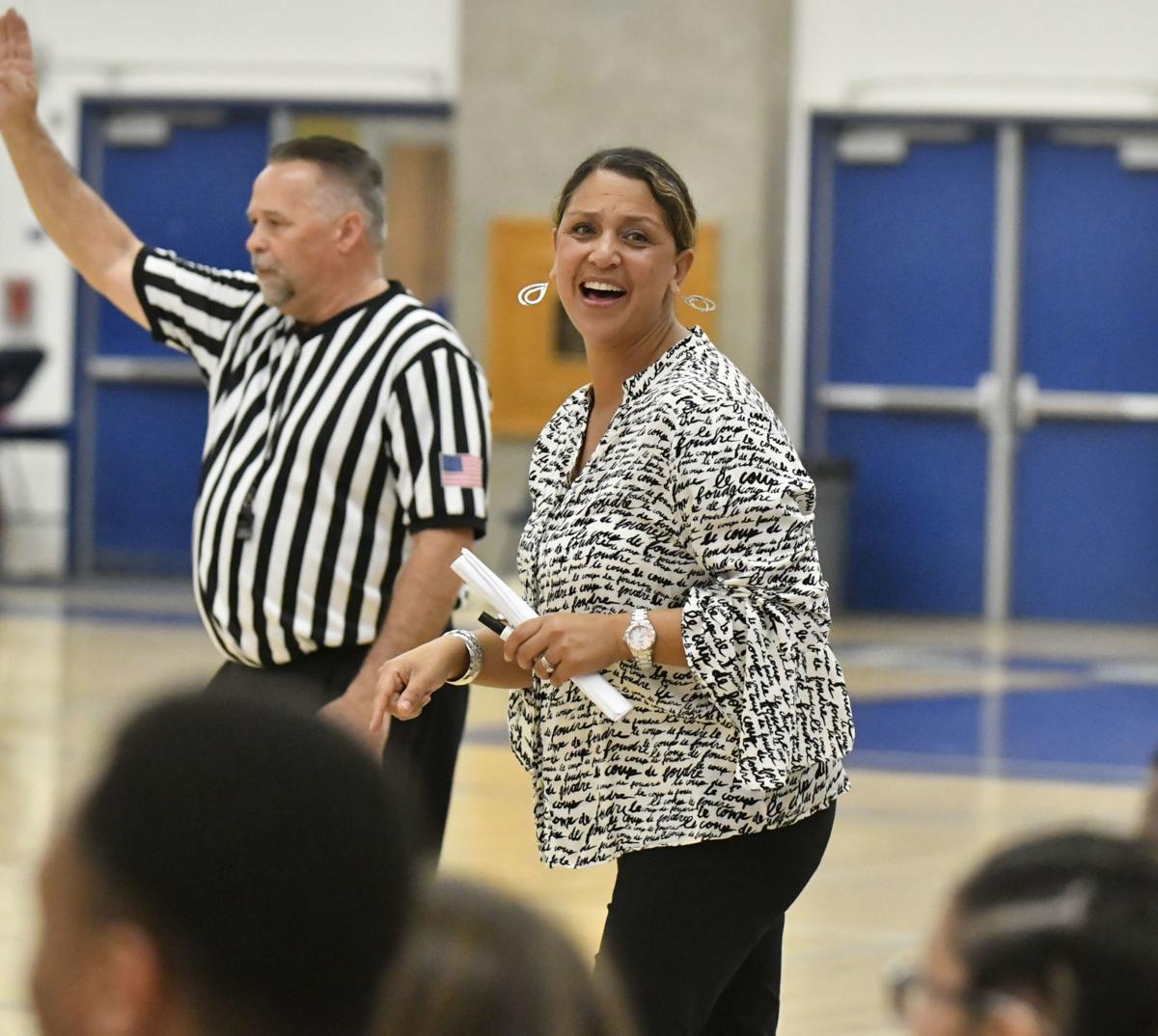 Lompoc's coach Claudia Terrones cheers after a Brave field goal at the end of the first half against Santa Ynez, on Monday.

Claudia Terrones has a résumé filled with league championships, CIF playoff appearances and state championship runs as a decorated coach and athlete.

But on Wednesday, she will be adding this title: Northern Santa Barbara County Athletic Hall of Famer.

The honor has left Terrones smiling and stunned.

To say that sports are non-stop for Ryan Morgan would be an understatement.

“When I got the call, I was in shock,” Terrones said while inside her athletic director room on the Lompoc High campus on Monday afternoon. “I’m humbled. I’ve been to these things for the past 15 years and there are a lot of great people who have done a lot for not only their sport, but for their community.”

Terrones is usually not one to talk about herself. She instead would rather place the light on the athletes she coaches and the children she raises.

“I don’t like being in the limelight,” Terrones said, smiling. “If you ask people, I never talk about when I used to play. The only thing I say about my past is that I respected adults, I worked hard every day and I never let where I come from as an excuse.”

She is aware, though, that on Wednesday night inside the Elks, she will be giving out credit to the people who brought her to this point – from her years as a St. Joseph Knight, Hancock Bulldog and all the way to her current time with the Braves.

Lompoc High track and field added more to its already long-list of accomplishments in 2019: CIF Southern Section Finals qualifiers. The Braves – the 2019 boys Channel League champions while also producing individual league champs on the girls side – will have seven total athletes expecting to compete down in El Camino College at Torrance on Saturday for the divisional finals.

She’s mentioned names like her former girls basketball head coach Ed Torres, LHS principal Paul Bommersbach and Greg Sarkisian, who coached Terrones in cross country and track at St. Joseph, as people who helped mold her into the person that she is now.

“I feel honored to be a part of that group. There are a lot of big names in there,” Terrones said.

Roy Thomas was the star pitcher of the Lompoc Little League team that reached the SoCal Finals in '65, the '68 Babe Ruth team that went to the national championship, and the Lompoc High team that won a CIF Section title in 1970. Yesterday, his No. 29 was retired

Terrones is so stunned by the honor that she felt compelled to prepare her speech on paper.

“I started to write stuff. I feel like I need to write because I will start going on in different directions,” Terrones joked.

But she gave a sample of what she plans to touch base on while standing behind the podium and delivering her acceptance speech. That message: give back to your community.

Headed to the Hall of Fame: Former Santa Maria High School coach Ginny Barnett to be inducted into Round Table Hall of Fame

More in 2019's Best: Collection of this year's top sports stories on LompocRecord.com (2 of 15)

Cabrillo grad Sydney Townes not through with her sports yet, even after completing her NCAA softball career

Lompoc Valley Baptist School has its sights on expansion — both enrollment and the size of its campus — and as part of that vision is adding new sports programs which are expected to further both.

Lompoc High School athletic director Claudia Terrones, who is being honored by the North Santa Barbara County Athletic Round Table, has filled her office with memorabilia from her athletic career, as well as family photos.

Lompoc's coach Claudia Terrones cheers after a Brave field goal at the end of the first half against Santa Ynez, on Monday.