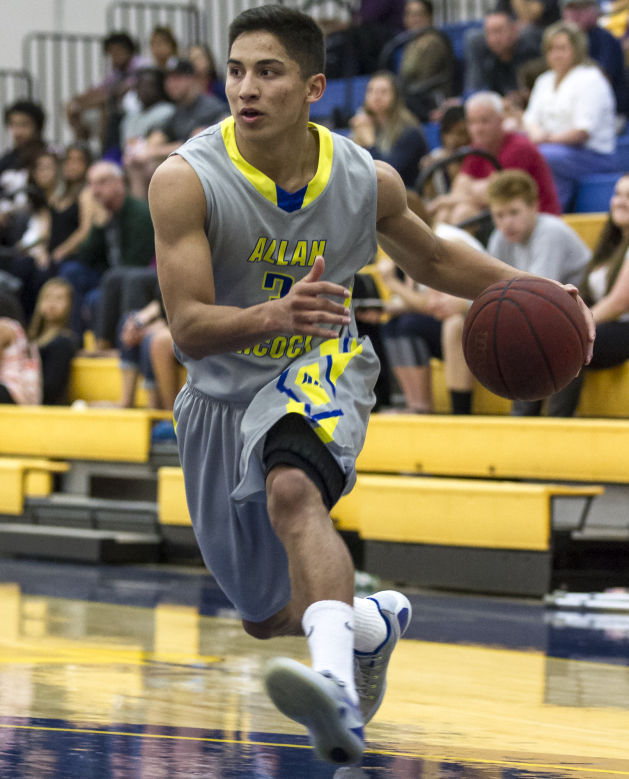 Matt Willkomm brings the ball down court during a Jan. 24 game against Santa Barbra City College. Willkomm is the Northern Santa Barbara County Athletic Round Table's male Athlete of the Week. 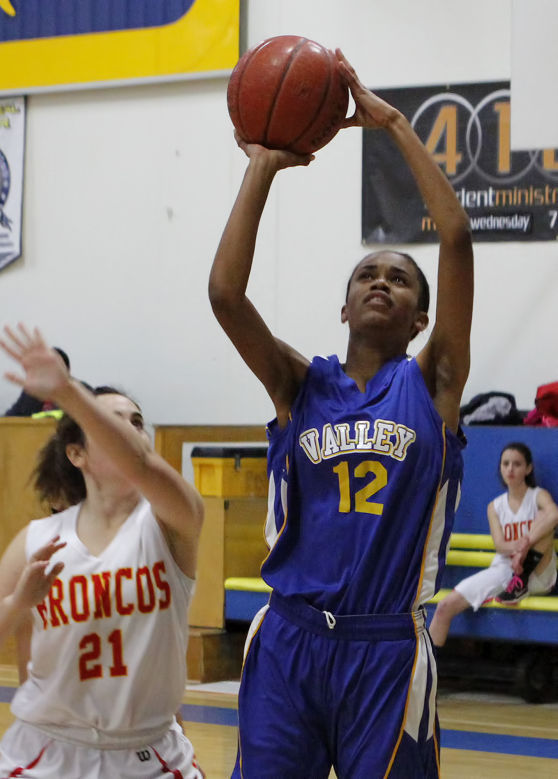 Valley Christian Academy's Simone Swain goes up for two points during a Dec. 30 home game against Coast Union. Swain is the Northern Santa Barbara County Athletic Round Table's female Athlete of the Week. 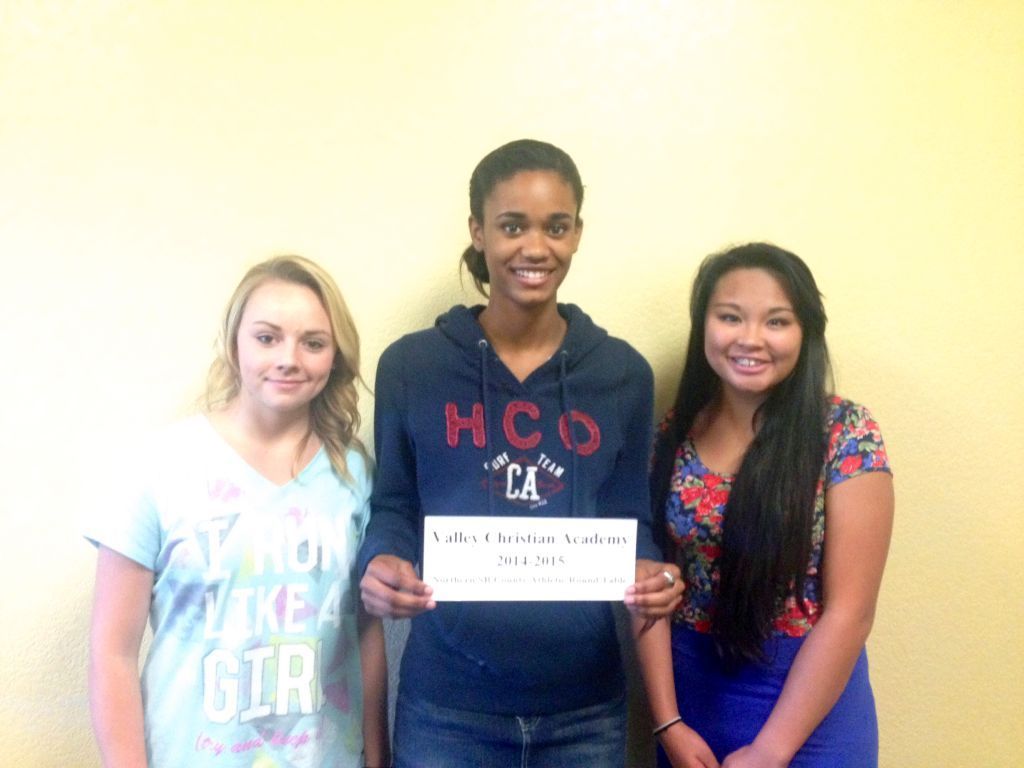 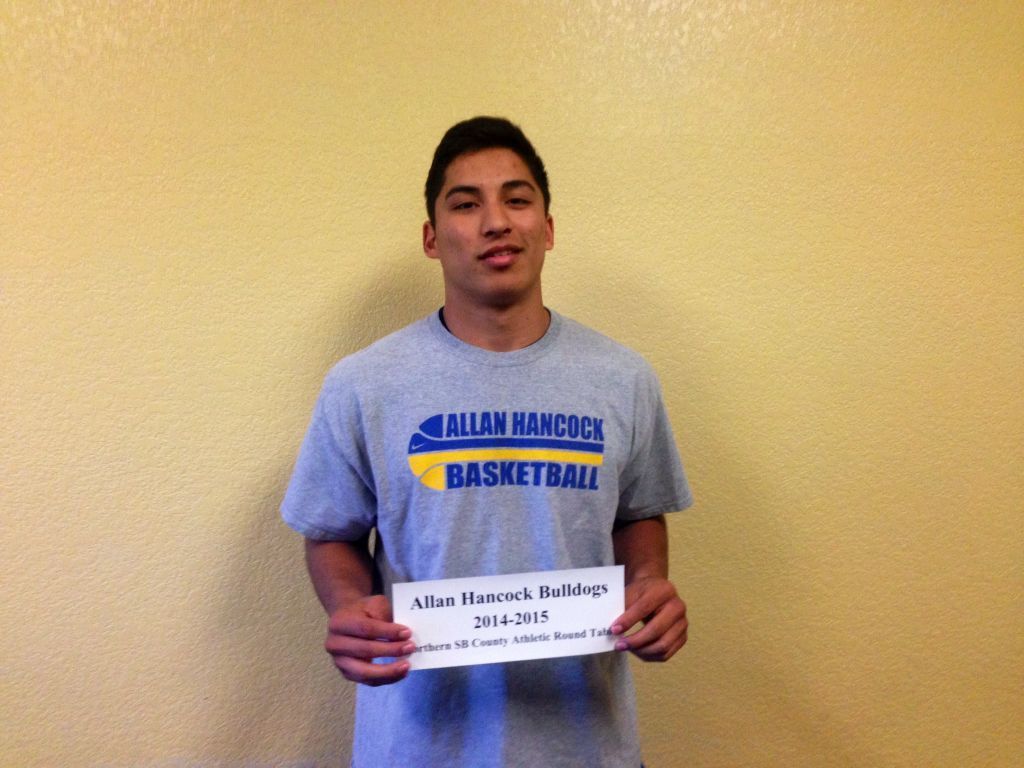 The Hancock College men's basketball team has put everything together since the Western State Conference North Division play tipped off. The Bulldogs are currently tied for first in the conference at 6-1.

A big part of the success has come off the jump shot of Arroyo Grande High School grad Matt Willkomm.

Last week the freshman was a key player in both WSC wins.

On Wednesday, in a 73-60  win at Oxnard, Willkomm had 26 points and was 7-of-8 from behind the 3-point line. Then on Saturday, he hit a 3-pointer to send the game into overtime and finished with 24 points as Hancock won an overtime thriller, 102-97 over Moorpark.

For his heroics, Willkomm was named the male Athlete of the Week at the Northern Santa Barbara County Athletic Round Table Luncheon, held Monday at Giavanni's Pizza in Orcutt.

Meanwhile, the most valuable player from high school's Division 6, Simone Swain from Valley Christian Academy girls basketball team, led her team to a CIF title last year as a junior. She is now in her senior season, hoping to help the Lions win again in the playoffs.

Last week VCA played three games and Swain led the way in all of them.

In a 68-13 win over Coast Valley League opponent Shandon, Swain scored 10 points and had 10 rebounds with five blocks, then in a non-league game against Contra Costa Christian, she had a triple-double with 10 points, 15 rebounds and 10 blocks.

She finished off another double-double on Friday in a 35-7 win over CVL foe Coast Union, with 10 points and 11 rebounds.

VCA clinched the league title with Friday's win and is now 13-2 overall and 8-0 in league play with two games to go in the regular season.

For dominating on the boards and on defense, Swain was named the female Athlete of the Week.

"Jose is my leading scorer," Baca said. "He has 10 goals for us in league play."

Baca said that the team played a great game against first place Santa Ynez last week, losing 2-0, and hopes that his team will play with the same intensity when it plays at Lompoc tonight at 5:30 p.m.

"These two ladies are the cornerstone of our basketball team," Troup said. "They are both major contributors to the team and the success we are having."

"He is one of the leading wrestlers that we have this year," Troup said.

Girls basketball coach Mike Alexander recounted a tough week for the Pirates, but is pleased with how hard his young team — missing two starters — played.

"We are very young and I'm proud of the girls," Alexander said. "We will keep fighting."

"Arianna has been in the girls basketball program for four years," Barrett said. "She also plays volleyball and is on the track team. She has a 3.7 GPA and hopes to major in physical therapy.

And Rylee — I don't think there is a better athlete on the Central Coast in my opinion — she golfs, plays basketball and softball and she has a 4.4 GPA."

"Sommer leads in rebounding and she is just a well rounded out player and, being just a sophomore, we have high hopes."

"Tony shattered our school record in goals by his sophomore year," McKenzie said. "And he's only played in seven games this year because of injuries and he already has seven goals."

Athletic director Greg Lanthier spoke for girls basketball and boys soccer, but started with a comment about wrestling.

"We actually have an outstanding boys and girls wrestling program," he explained with a smile. "But the wrestling coach informed me that since they wrestle this week, they are not allowed to eat."

From basketball he introduced juniors Karly Beyers and Mady Barenchi. The defending league champs are now in fourth place at 5-5 after edging Righetti Friday.

Two seniors — Mario Delgado, a central defender who has also scored four goals, and Anthony Guerrero, a forward with nine goals — were at the luncheon for boys soccer.

"Boys soccer — still is probably the most successful boys team program our campus," Lanthier said. "They are the defending league champs and are currently 9-1 in league."

"Both of these ladies — coach said — have really turned it on in the second half of league and have done a great job," Graack said.

Forward Jordan Pollard represented the soccer team. Graack said Pollard scored the lone Righetti goal in the 2-1 loss to Pioneer Valley and is leading the league in assists.

Women's basketball assistant coach Leslie Miller reminisced about attending the Round Table while a member of the Santa Maria High girls basketball team and the Hancock team, where she played two years.

"I have to say it's a little surreal to be here as a coach," Miller said. "It feels like it was just yesterday that I was here as an athlete.

"So savor this you guys, because it goes by super quick."

Miller introduced two players that she said are the type of hard-working participants that the program is looking for — sophomores Nicole De La Cuerra and Jasmin Chavez.

Men's basketball coach Tyson Aye spoke proudly about his team and what they have accomplished in conference play, going 6-1 and being tied for first.

"We've been going through some tough things lately," Aye said. "But we're waking up every day, going to work and controlling what we can control, which is our attitude and our effort.

Boys soccer coach Al Garcia is proud of how his team has competed this season.

"These two have been playing tremendous soccer all year," Garcia said.

"Alyssa has been doing very good and I admire that," Ramirez said. "Every time she goes out of the court, she plays very hard and leaves it all on the court."

Matt Willkomm brings the ball down court during a Jan. 24 game against Santa Barbra City College. Willkomm is the Northern Santa Barbara County Athletic Round Table's male Athlete of the Week.

Valley Christian Academy's Simone Swain goes up for two points during a Dec. 30 home game against Coast Union. Swain is the Northern Santa Barbara County Athletic Round Table's female Athlete of the Week.