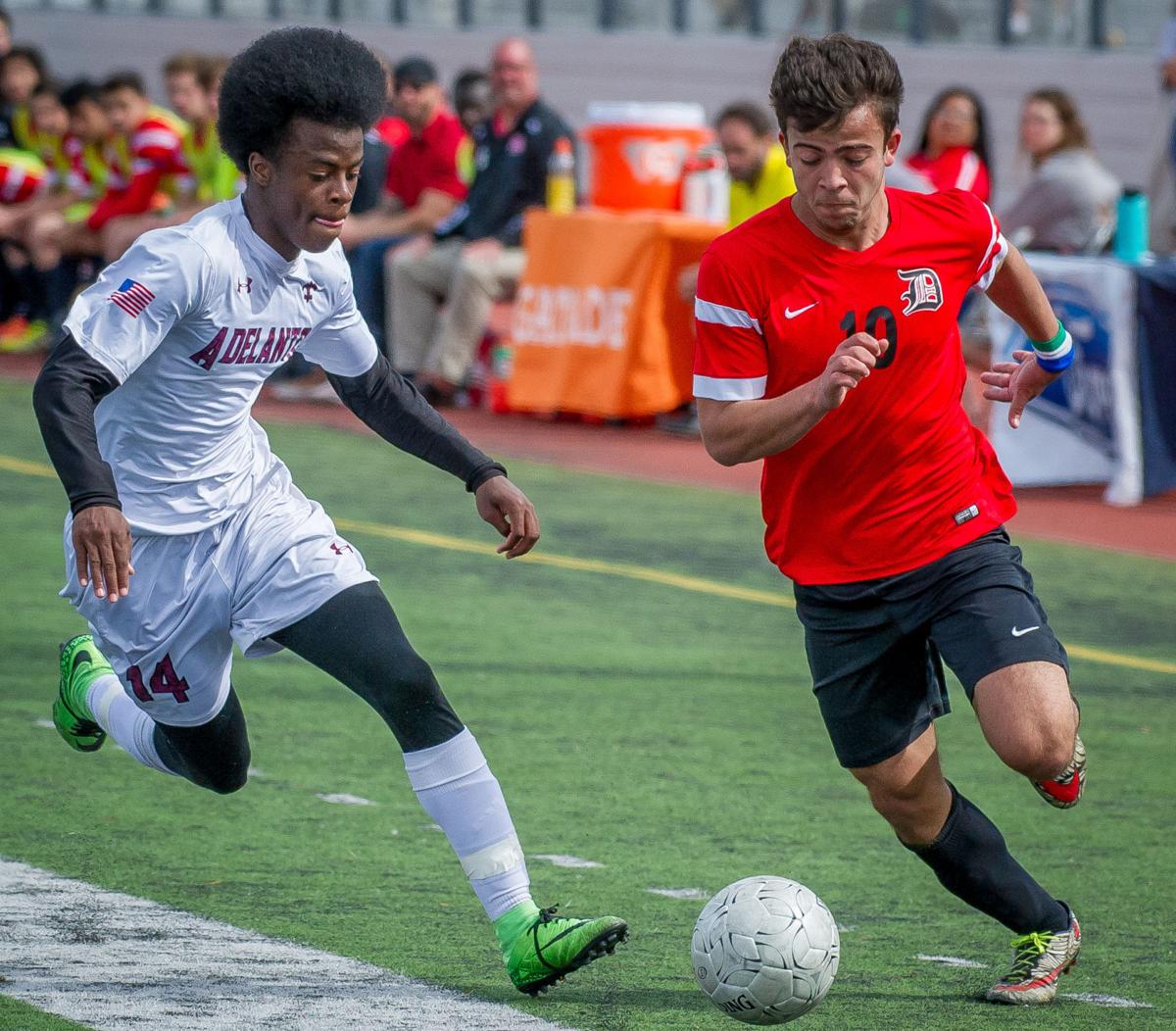 Dunn's Rodney Michael, right, battles Adelanto's KMari Wilson for control of the ball during the CIF Southern Section Division 6 championship game on March 4. On Monday, Michael was named the Gatorade Player of the Year for California. 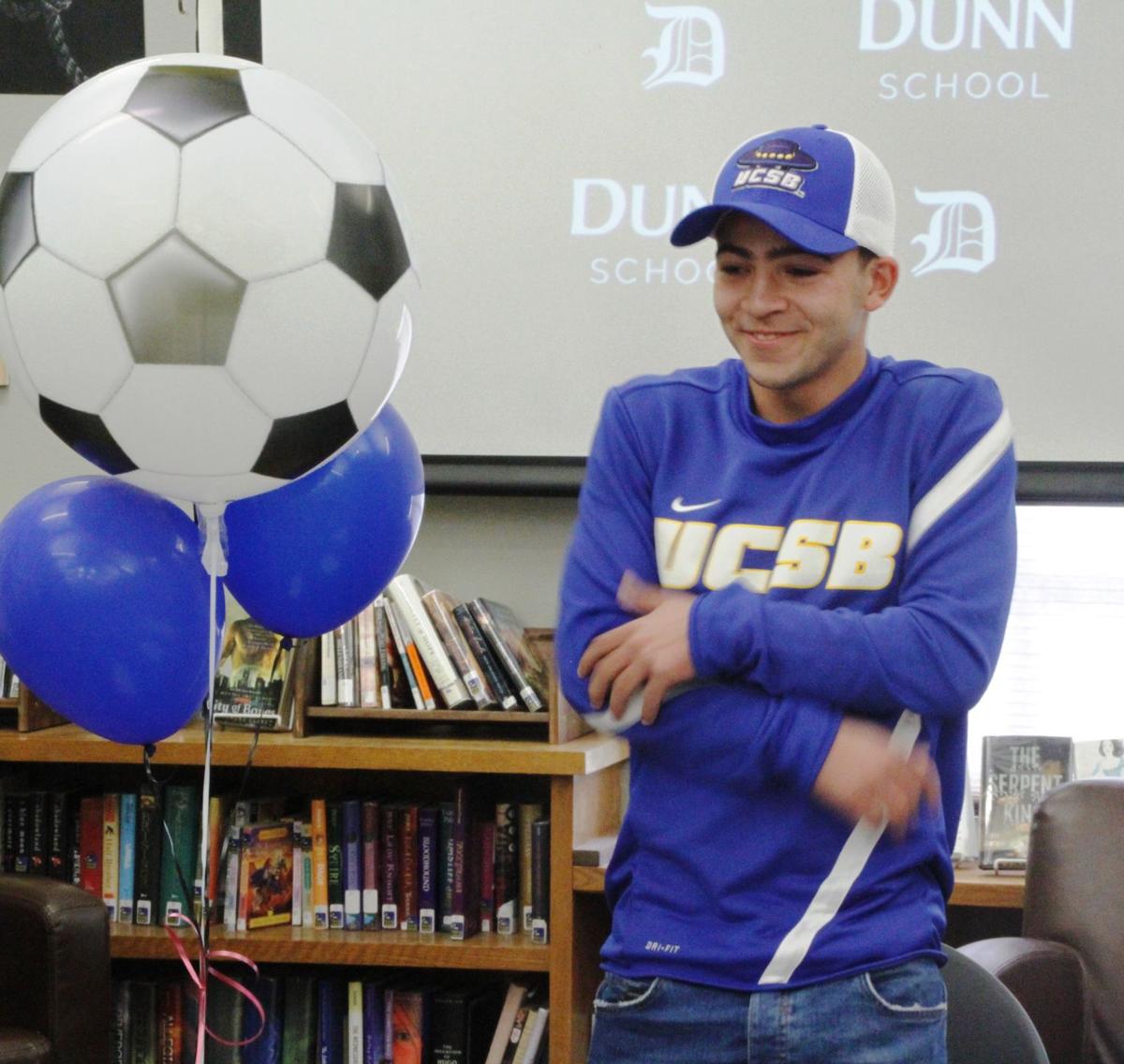 Rodney Michael celebrates on National Signing Day at The Dunn School in February. Michael signed to play soccer at UCSB and won the Gatorade Player of the Year award for the state of California on Monday.

Another Earwig has been honored as a Gatorade Player of the Year.

"The award, which recognizes not only outstanding athletic excellence, but also high standards of academic achievement and exemplary character demonstrated on and off the field, distinguishes Michael as California’s best high school boys soccer player," the Gatorade Company said in a press release.

Danladi won both awards as a senior at Dunn in 2014, before going on to star at UCLA and eventually become the No. 1 overall pick in the MLS SuperDraft last year by Minnesota United. Danladi is a native of Ghana.

The 5-foot-8, 145-pound senior forward led the Earwigs to a 13-1-1 record and the CIF Southern Section Division 6 championship this past season. Michael scored 22 goals and passed for 14 assists, tallying seven goals in Dunn’s five-game run to the sectional title. The CIF Division 6 Player of the Year, Michael scored the game-winning goal in the sectional title game in both 2015 and 2017, when the Earwigs beat Adelanto in the title game.

Michael concludes his prep soccer career with 74 goals and 43 assists. Michael helped the Earwigs go 16-1-1 this past season.

Michael is a native of Sierra Leone in West Africa. He has volunteered locally as part of a fundraising campaign to benefit cancer research. He has also donated his time distributing goods to the homeless and to the Craig Bellamy Foundation, which runs a soccer academy in Sierra Leone.

“Rodney was literally quicker on the ball than my defenders were off the ball,” said Sam Mahtani, head coach of Maranatha High School in Pasadena. “I’ve never seen someone move so quickly with such change of speed and direction. He was impossible to defend.”

Michael has maintained a weighted 3.81 GPA in the classroom. He has signed a national letter of intent to play soccer at UCSB beginning this fall.

Although the Braves dropped a 48-24 decision to the Dos Pueblos Chargers in a Channel League wrestling match, the brothers, senior Corbin and junior Gracen, won their matches in dramatic fashion to remain undefeated in league matches.

Maya Mendek made the play of the game.

For the Hayes brothers, wrestling is a family affair.

Using a full court pressure defense, there were Cabrillo hands everywhere and that turned a close game into a runaway 58-34 victory.

Central Coast Power Rankings: See how we rate the top boys and girls hoops teams in the area

Those eligible to be listed are from the five leagues in our area: The Ocean, Mountain, Channel, Condor and Coast Valley.

It all came down to the fourth quarter.

Cabrillo shot 36 free throws against Lompoc. The Conqs made 22 of them. Lompoc, meanwhile, went to the foul line 24 times. The Braves made just three of those attempts.

Ozzie Andrade's job is to make sure the ball doesn't find the back of the net.

Dunn's Rodney Michael, right, battles Adelanto's KMari Wilson for control of the ball during the CIF Southern Section Division 6 championship game on March 4. On Monday, Michael was named the Gatorade Player of the Year for California.

Rodney Michael celebrates on National Signing Day at The Dunn School in February. Michael signed to play soccer at UCSB and won the Gatorade Player of the Year award for the state of California on Monday.